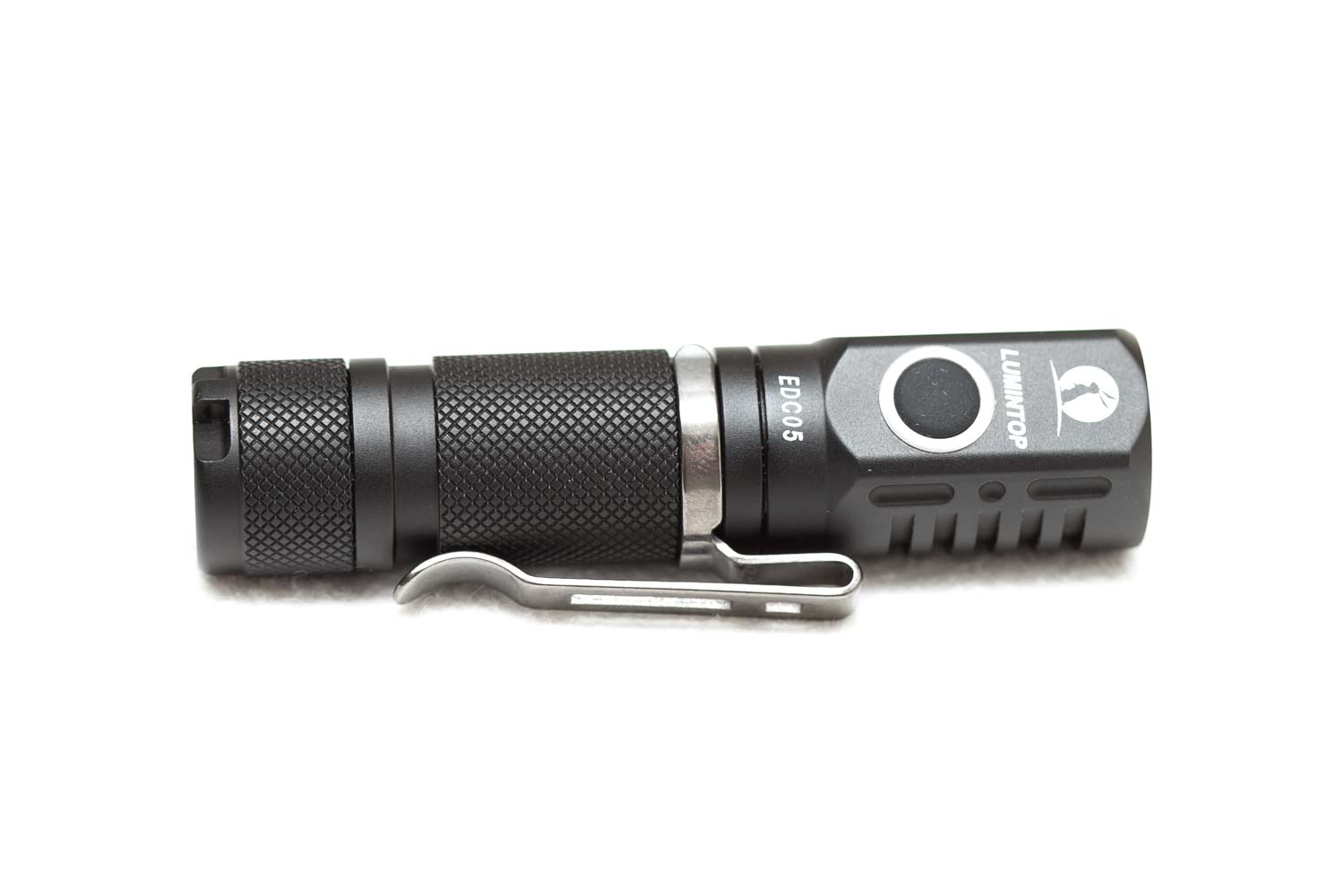 Looking for the bightest AA flashlight on the market? And you want to make sure you don't buy a dud, or a flashlight with exaggerated claims? Well, the Lumintop EDC05 might be the one you are looking for. For about $30 you can get aa flashlight that can do 400 Lumens from a single AA battery! Make sure you don't use an Alkaline battery, because they can't provide enough power.

If you are a little more adventurous and use 14500 Lithion Ion batteries, you'll be able to push the output to about 800 lumens, since the EDC05 can run off Lithium batteries as well. And all of that in a pocketable flashlight for only $30. 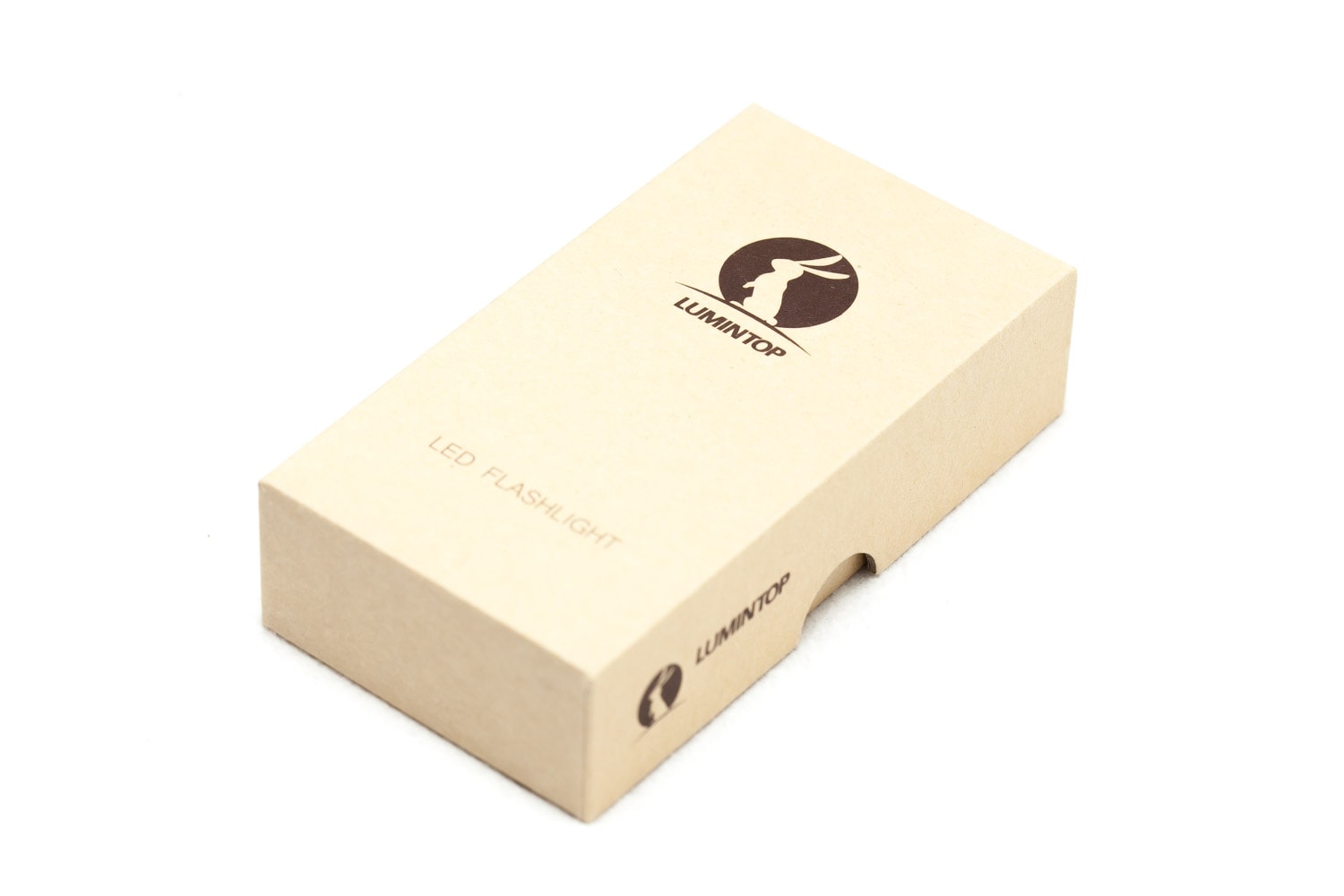 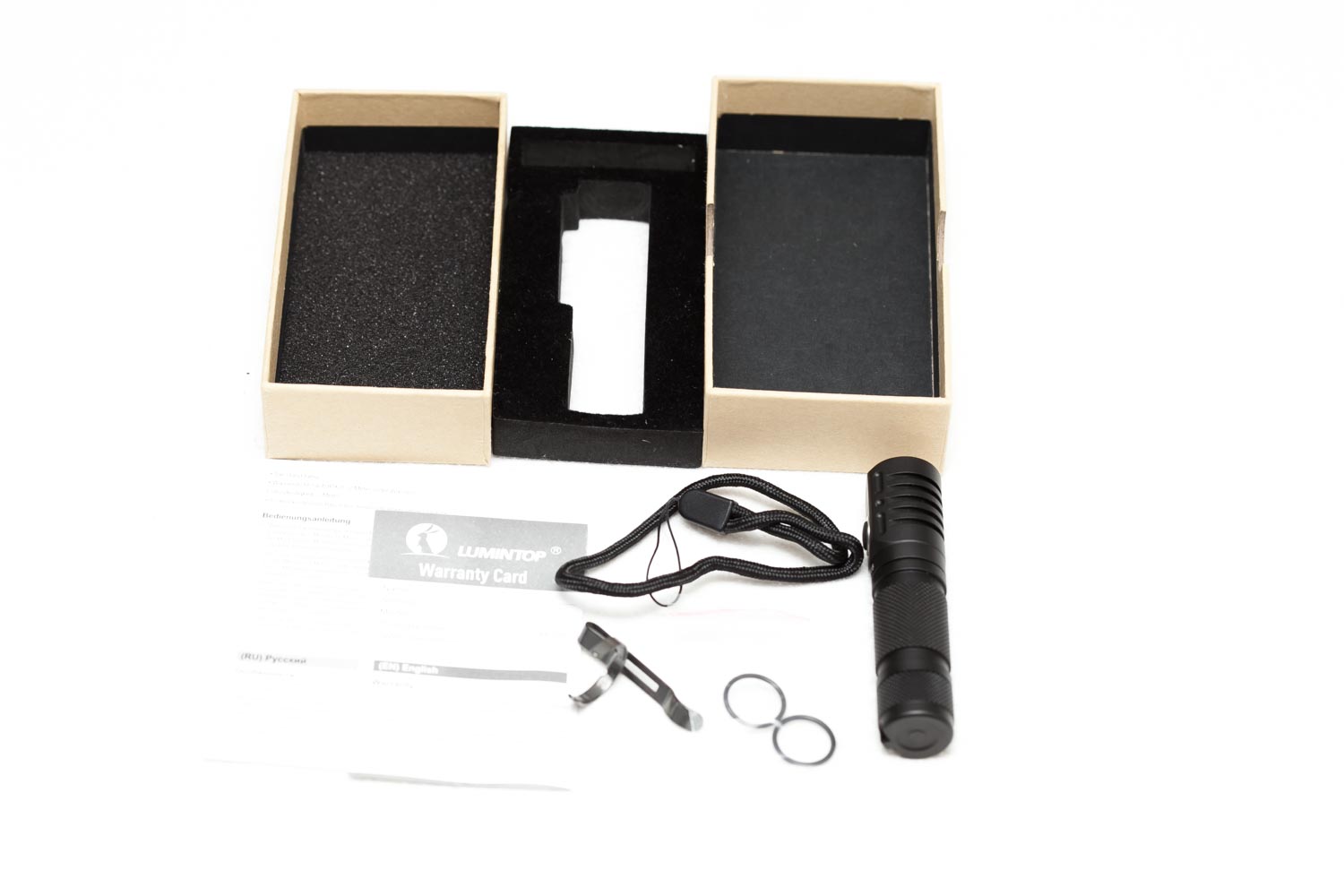 This Lumintop has something many people would like in a EDC light. Good knurling, a side switch, magnetic tailcap, reversible pocket clip and a lanyard attachment. Don't like the pocket clip, use the lanyard, need to attach it to some metal? No problem. To each their own. And that is what the EDC05 makes it so interesting. I'm not a big fan of side swith flashlight of this size, but I just wanted to test it since it's one of the brightest AA flashlight on the planet!

The included pocket clip can be attached both ways, so you can either pocket carry it, or clip it onto your baseball cap and use it as a headlamp. The clip is made of titanium (says the manual) and is pretty sturdy.
Tip: if you are too afraid to scratch the coating by taking off the pocket clip, simply rotate the flashlight body! The threading on both sides of the body are the same, so you can just turn around the body have the the pocket clip pointing into the other direction.

Besides the beefy double spring inside the tailcap, there is something else, and that is a pretty strong magnet. Strong enough to attach it in any position, sideways, up-side down, or just in any position you would like. The magnet is actually really strong!

To satisfy even more people, Lumintop also included a lanyard attachment on the tailcap. 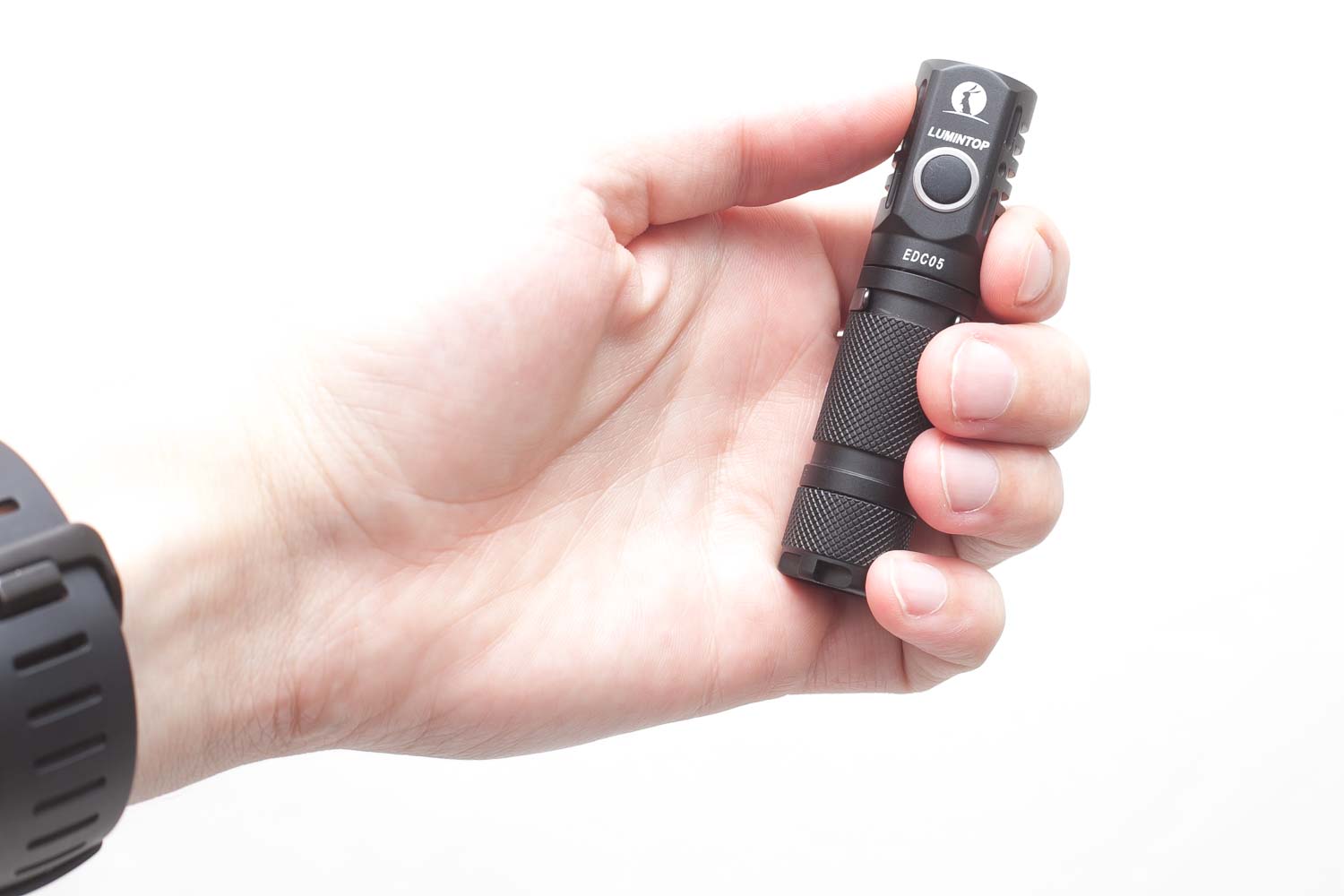 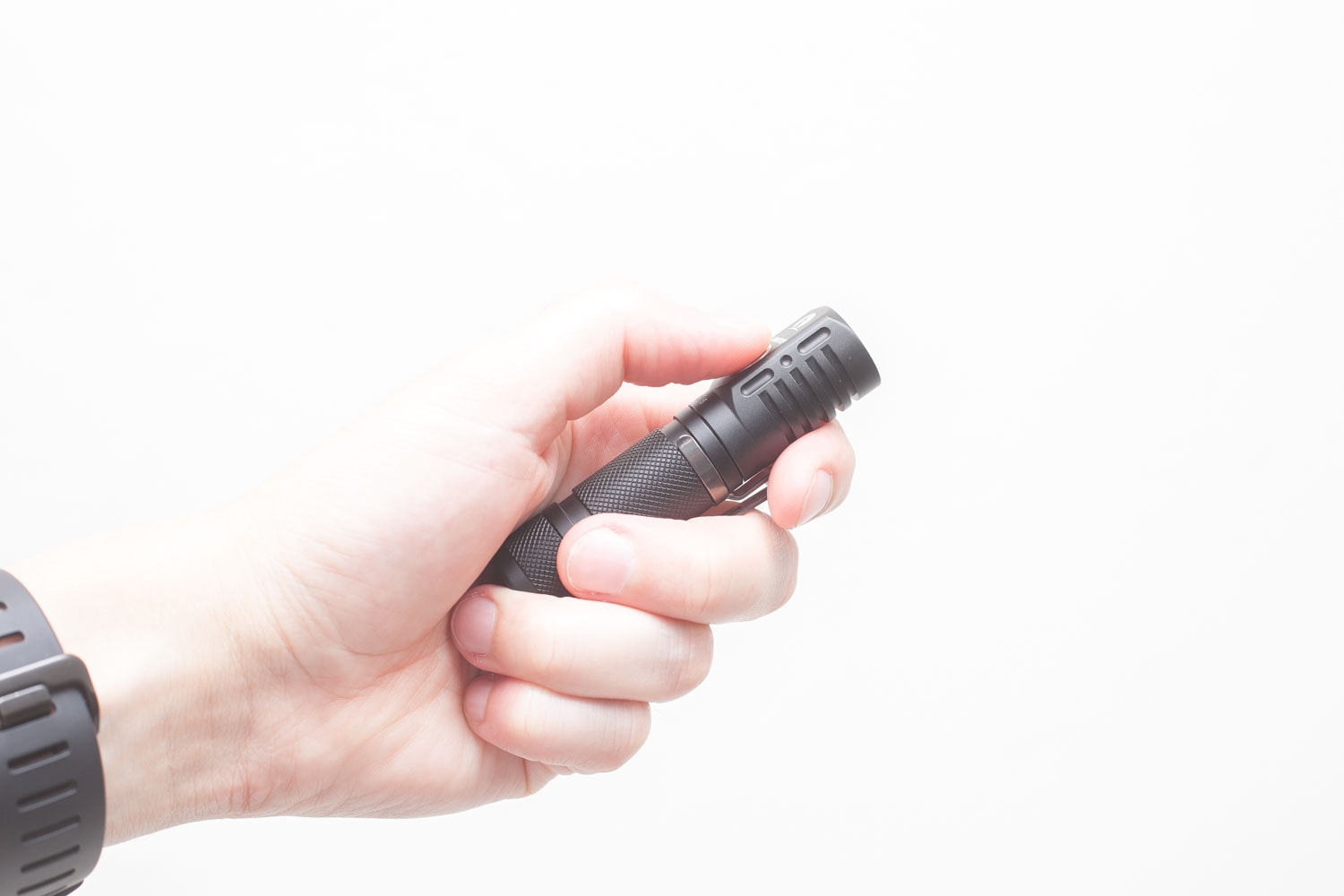 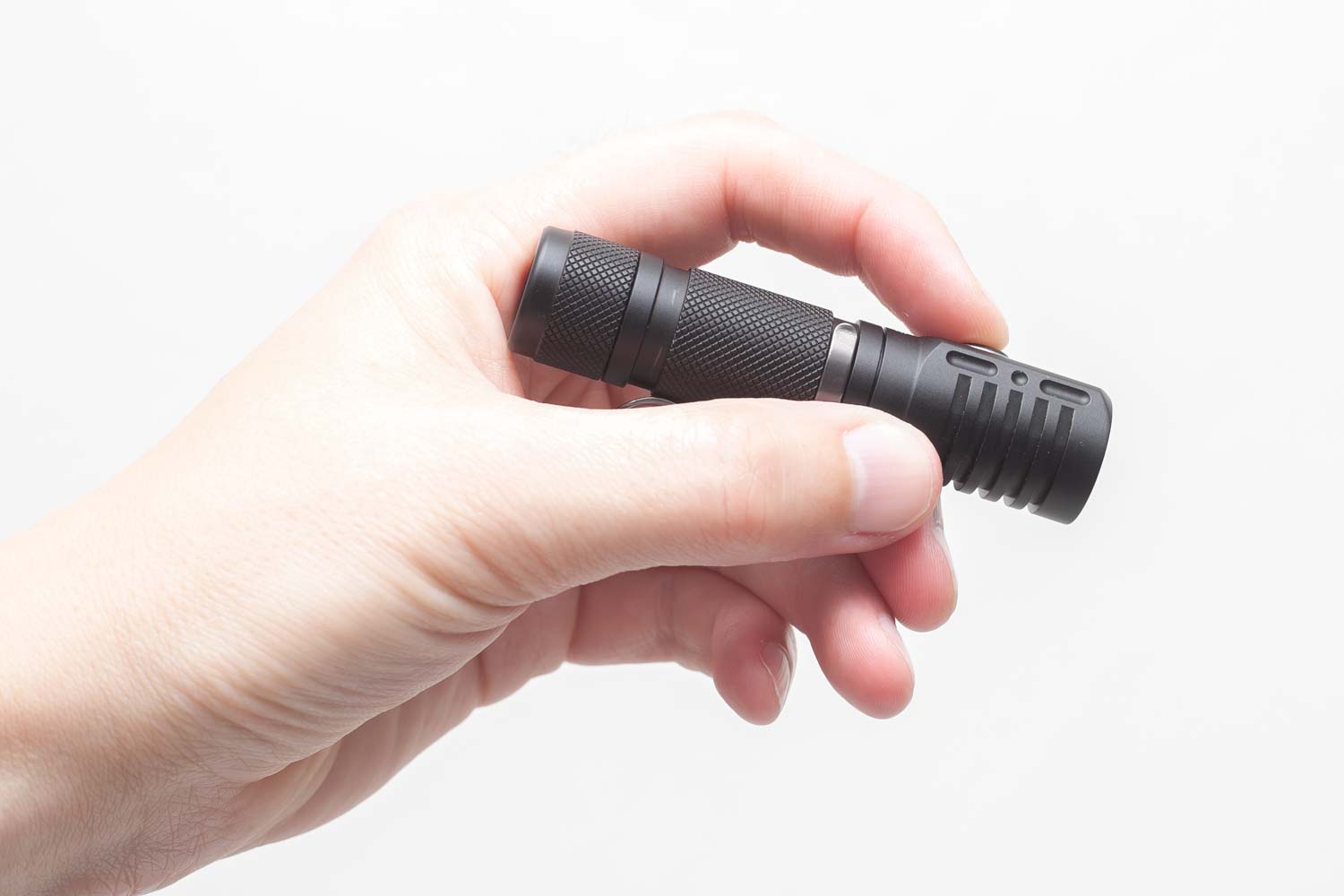 Lumintop produces some great flashlights, and this will definitely not disappoint you, built quality wise. The built quality is just top notch on all 3 parts, body, tail and head! No blemishes or bad anno can be found, anywhere on the light.

One great thing I found out is the following. The battery tube can be reversed. What is so great about that you might ask. What if you want to reverse your pocket clip? The easiest way, without damaging the coating is just reversing the battery tube. Because the threads are the same at both end of the tube.
Threads are well done, and no blemisch can be found and since the threads are anodized, you can easily do a lock-out by slightly twisting the head from the body, or the tailcap from the body. easy peasy.
There is 1 O-ring on both ends of the tube. 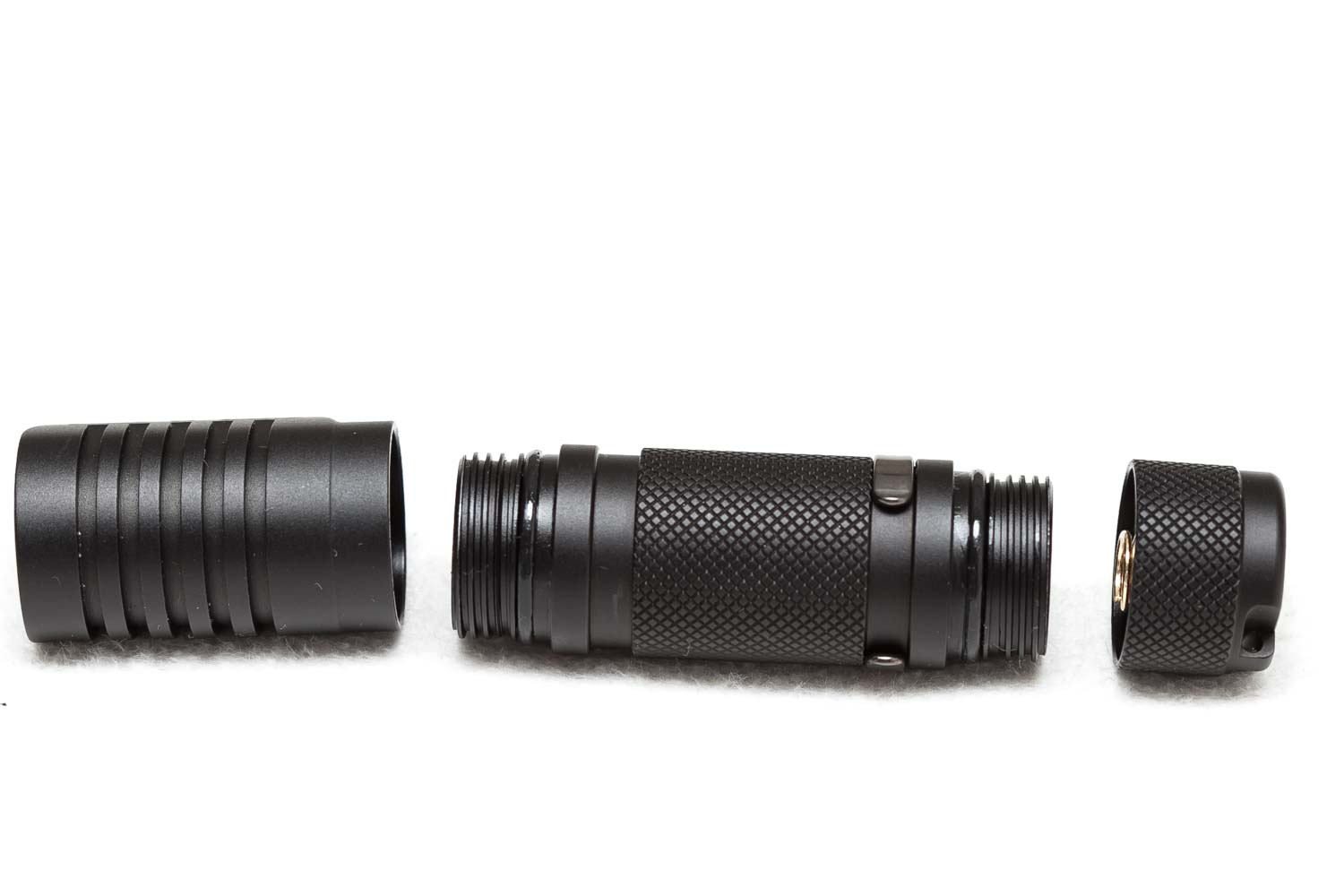 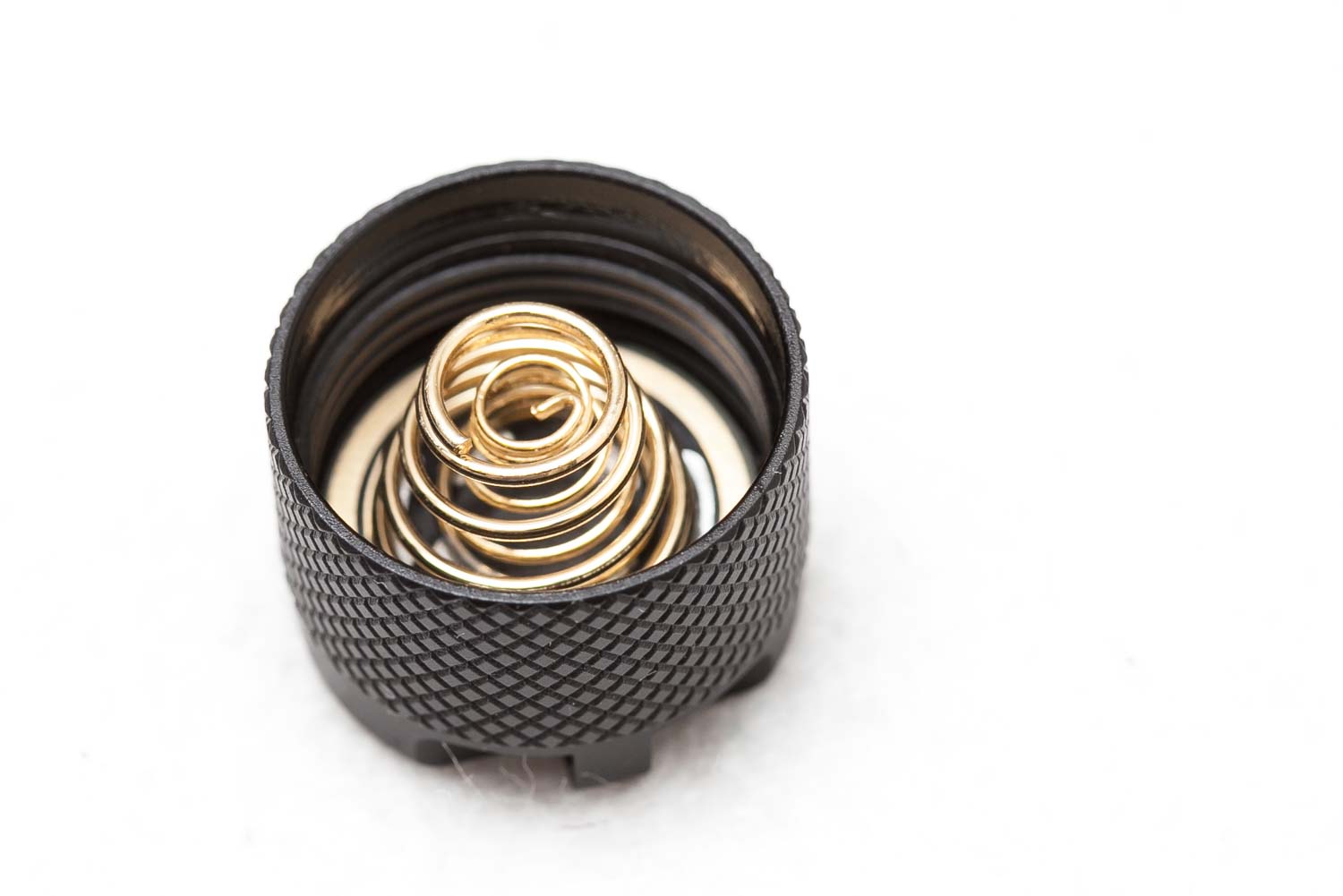 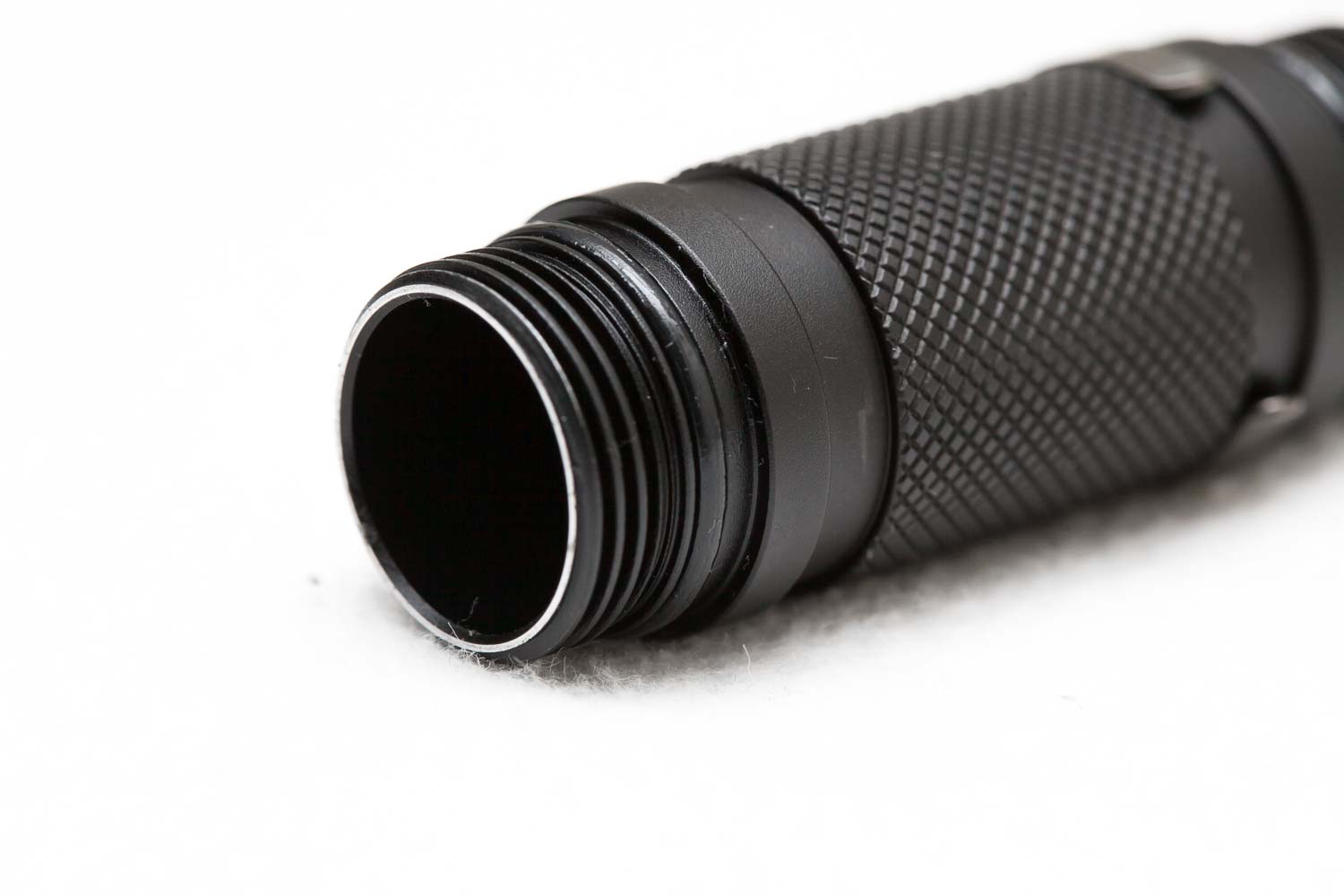 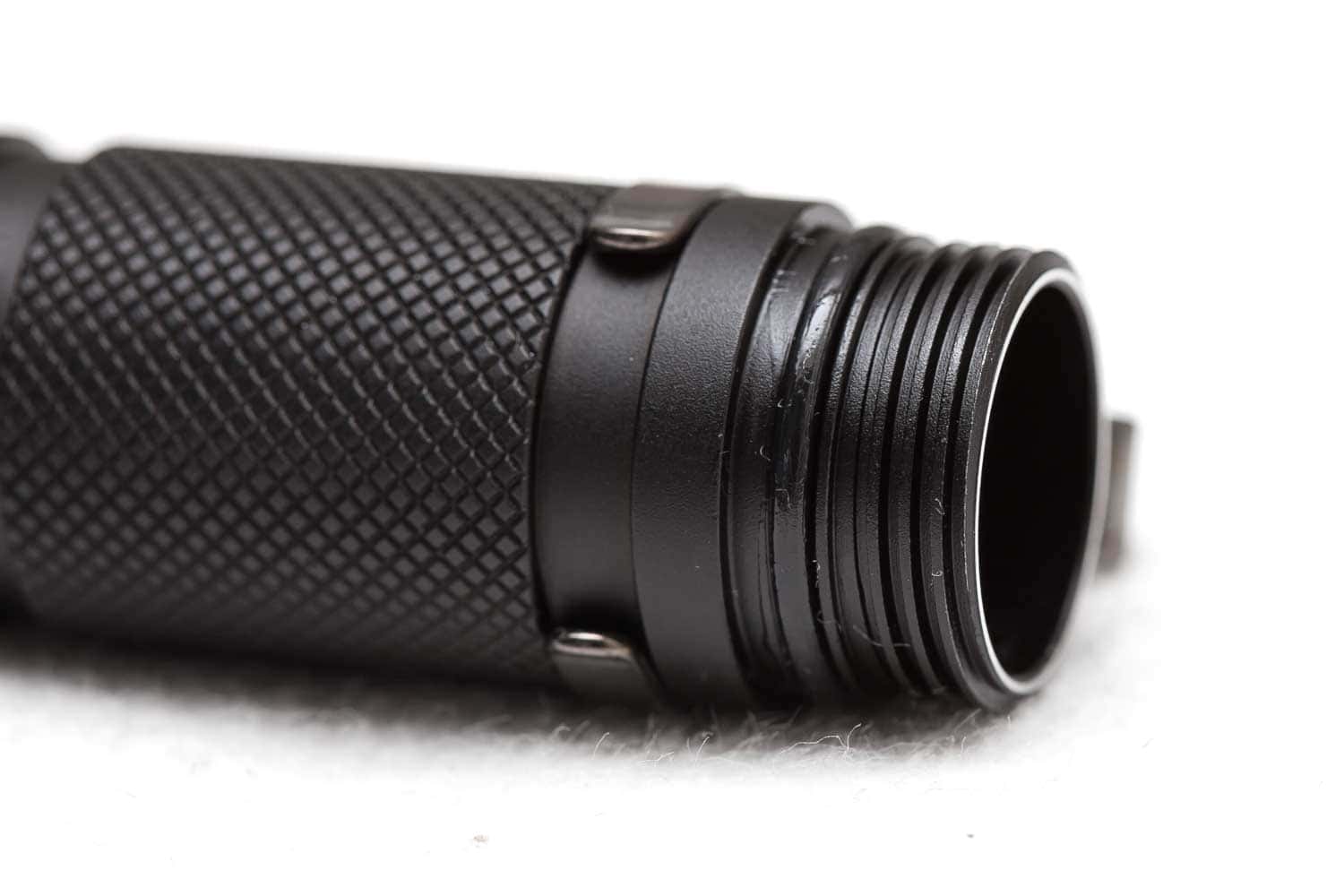 To squeeze the most Lumens out of an AA battery Lumintop choose a CREE XP-L LED. The EDC05 is available with a CW (cold white) and NW (neutral white) LED. The one I'm testing should be the CW LED to reach the highest output. NW will look better in some circumstances, but a CW LED can reach more output.

There isn't really a bezel since the head is made out of 1 piece, and only a metal ring is holding down the lens. When you hold the lens in a certain angle, you will be able to see some purple hue, this means that the lens has some coating. This is most likely an AR (anti-reflective) coating to maximize output and minimize the loss of light through the lens.

The EDC05 has a light orange peel (LOP) reflector to smooth out any artifacts, and smoothens the transition between hotspot and spill. A clear reflector would have a more distinct edge between the spill and hotspot! 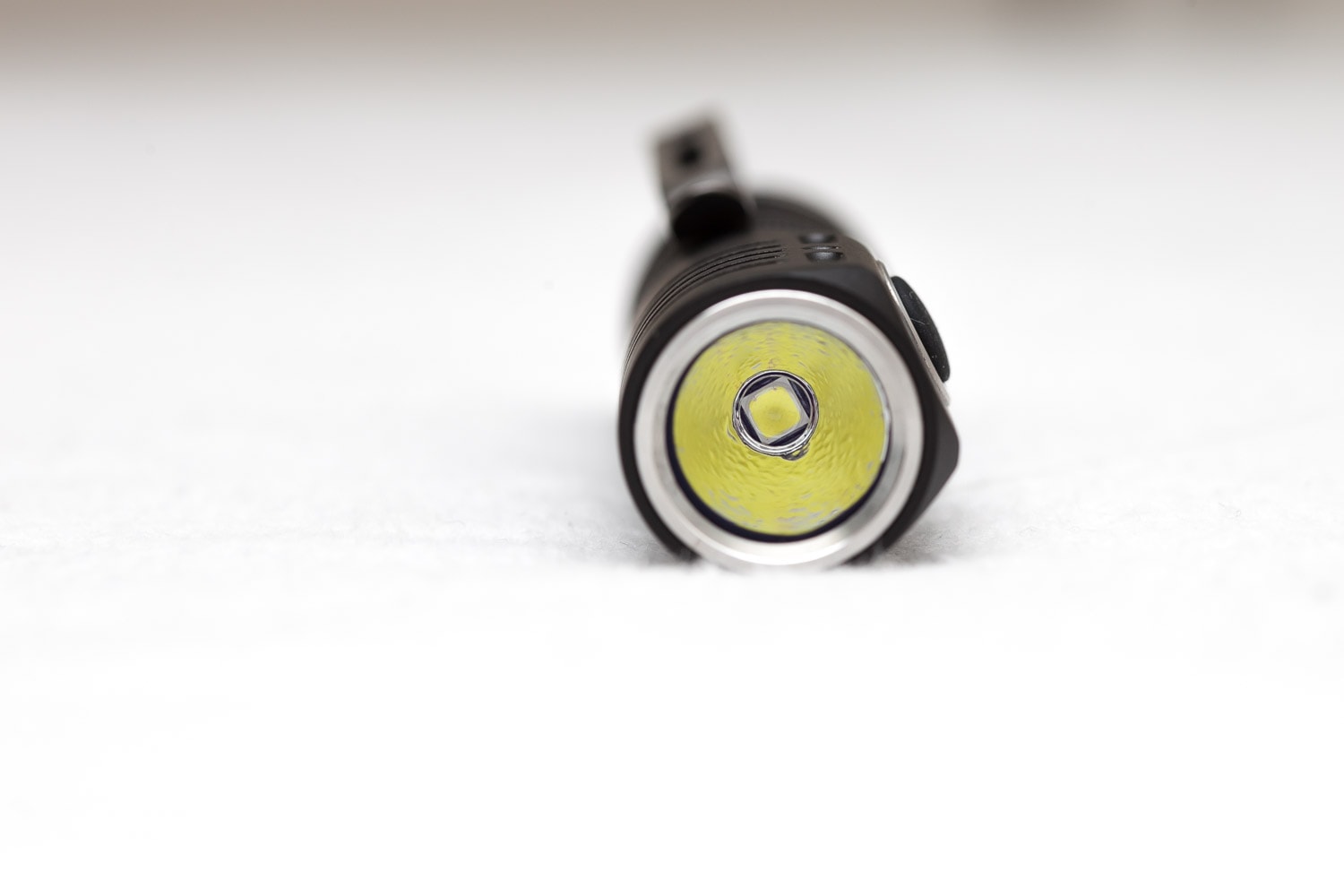 The EDC05 only uses a side switch. And basically there are 2 mode groups. 1 for normal operation, and 1 for the blinkies.

There is no electronic lock-out mode! But since the threadings are coated you can easily do a physical lock-out by unscrewing the head from the body or tailcap from the body just slightly.

Not that I could detect by eye. 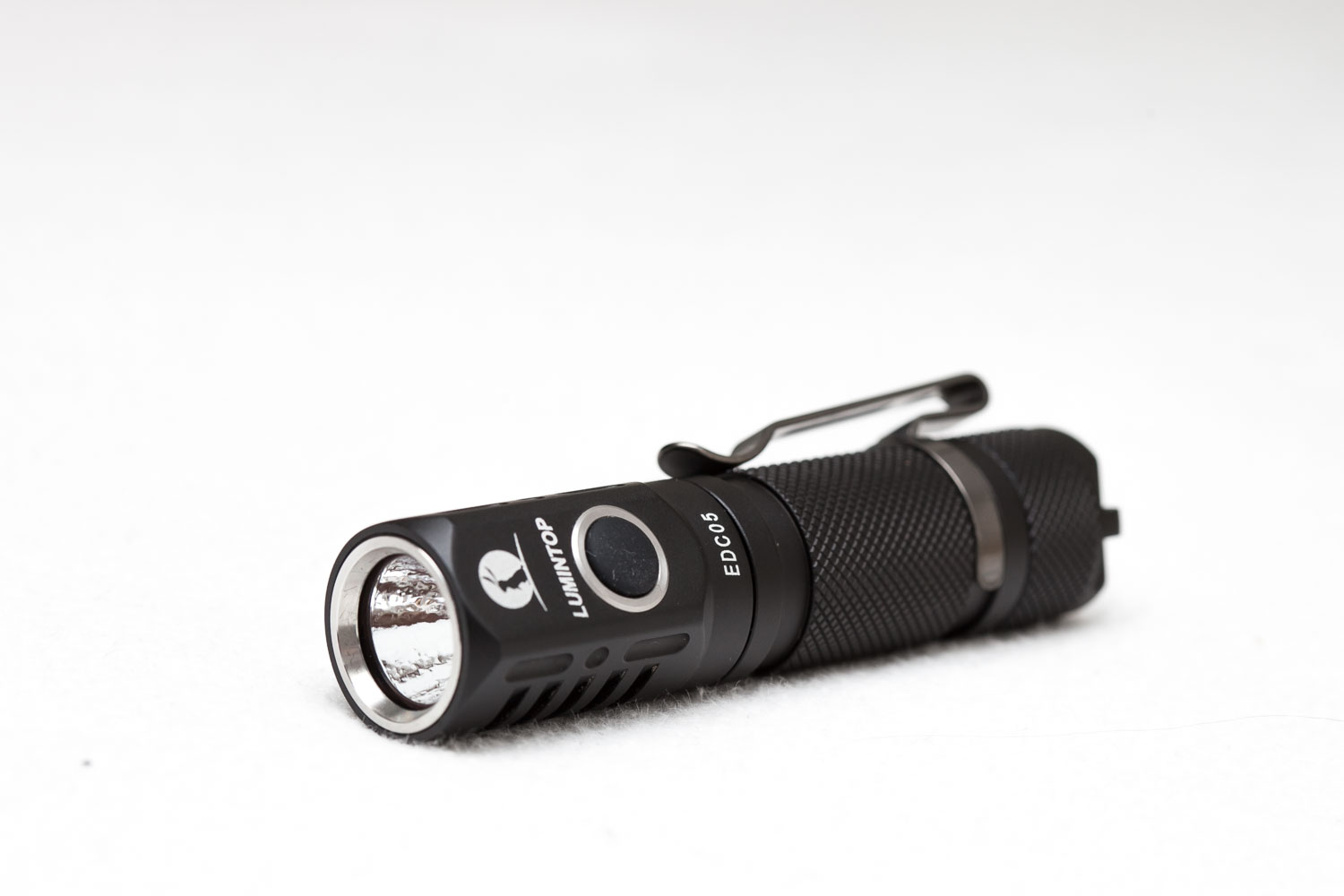 If you are afraid of using lithium ion batteries in your flashlights but still want to reach multi-hundred lumens, this might be one of the best torches uhmmm flashlights to get. Even with an AA battery you can use the EDC05 without any hassle. If you want to use it with a 14500 lithium ion battery, you can do it as well. The EDC05 doesn't have any charging port, so you need to charge your batteries on a dedicated charger, outside the flashlight.

Every time when I reach this part of the review I get most excited. Why? Simply becaus this is what I care about most, for most flashlights, unless they are a made of a rare metal (mokume, trimascus, titanium, bronze, copper).

The reason for buying the Lumintop EDC05 is simple.... its output. The EDC05 should be able to reach 400 lumens on a single AA battery. And that is a brave claim. Not many manufacturers can actually reach that output from an AA batterry. So is Lumintop just lying, or can this really do 400 lumens. Check out the test below.

My measurements vs (MFG):

As you can see, the numbers don't line up with the numbers I got. I'm fairly certain that my numbers aren't far off. So the claimed Lumens vs Measured Lumens don't look alike. But still pretty impressive, 350 Lumens from a single AA Eneloop battery

Runtime was measured using the Android Ceiling Bounce App, that was developed by a Budgelightforum member. The first graph was taken by using a standard Eneloop AA rechargeable battery.

Max mode will give you about 2.5 minutes of runtime before it drops to 63% (225 Lumens). This remains extremely stable up till the Max output stays till 55 minutes, when it starts to drop output and completely turns off at 62 minutes.  At the time, the output is still 9% (33 lumens).

So you can roughly 1 hour of runtime using the Max mode.

Now using the same setting, but using a coppertop Duracell battery. New, unused. You can clearly see that Alkaline batteries are not made for high current applications. Instead of keep a constant brightness like the Eneloop, the Duracell is nog bale to sustaain.

This is where it gets interesting. The Throw I measure at startup (not at 30 seconds) was more than the manufacturer claimed! Lumintop claims 1500cd and 2500cd.

The beamshots are taken to compare some AA flashlights. From left to right: Enogear SS AA, Lumintop EDC05 and Convoy T1.
The first 2 pictures are their Lowest mode and Highest mode.
Then I changed the shutter speed to 1/800, 1/2000, 1/3200 and 1/6400. But the difference in output this close to the wall isn't too obvious. I would have to thought to see a bigger difference between a 350 Lumens flashlight and 200 lumens flashlight. 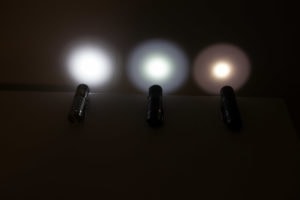 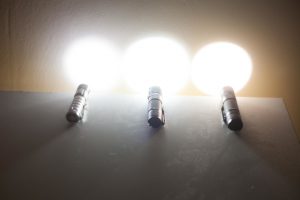 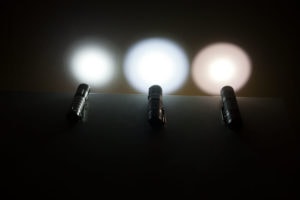 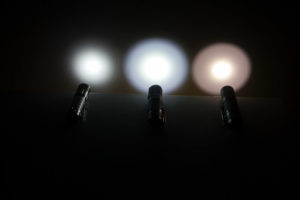 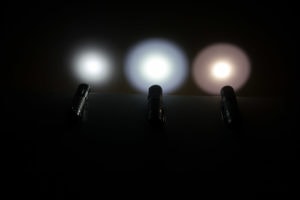 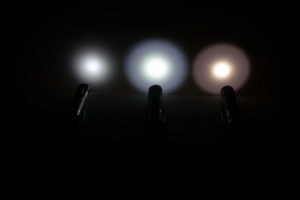 The Lumintop EDC05 is still a very nice flashlight for the money. Although I'm not personally a big fan of side switches, the EDC05 is a great performer. You'll get about 350 lumens when using Eneloop AA batteries, and more than 500 lumens by using a simple 14500 battery. The price and the included accessories make this is very interesting flashlight.