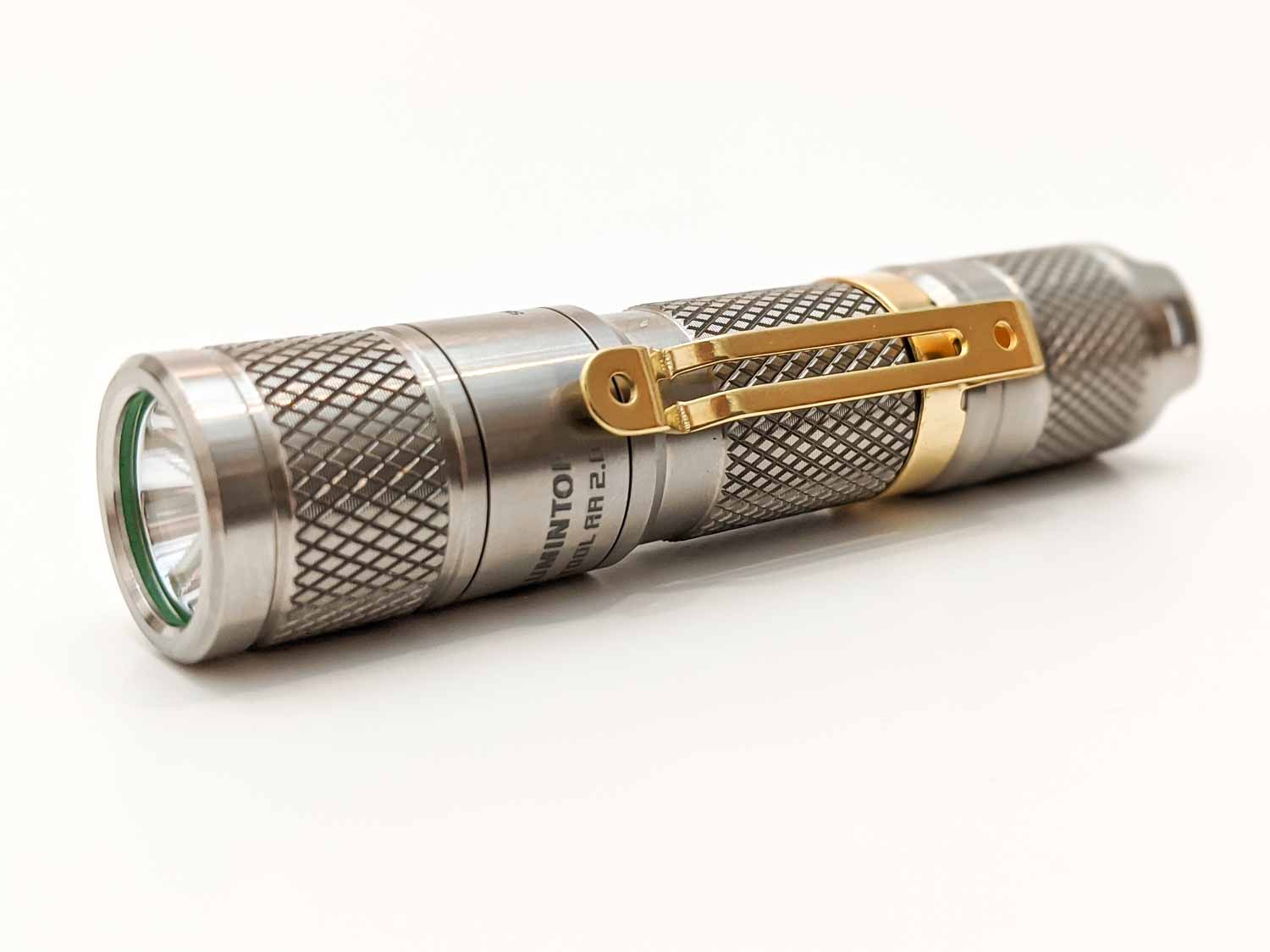 Lumintop recently released the Lumintop Tool AA 2.0 Ti, which is an excellent small, lightweight and very easy to carry EDC flashlight.
The well known Lumintop tool already is famous for its value for money, they did already made a titanium version of the Tool, but now they released the Tool 2.0 Ti
I saw the light on Budgetlightforum.com where someone mentioned Lumintop were releasing this light soon, so I got in touch with Lumintop and they were kind enough to send me this flashlight for an extensive review.

The flashlight comes in a brown recyclable cardboard box with the famous Lumintop bunny logo printed on it.
When opening the package, the manual is found, and below the manual, the light is revealed.
The beautiful Titanium light comes well protected and surrounded by firm black laser-cut foam. Next to the foam, another recyclable cardboard box is found with several accessories:

It has to be said, Lumintop did an outstanding job on this light. 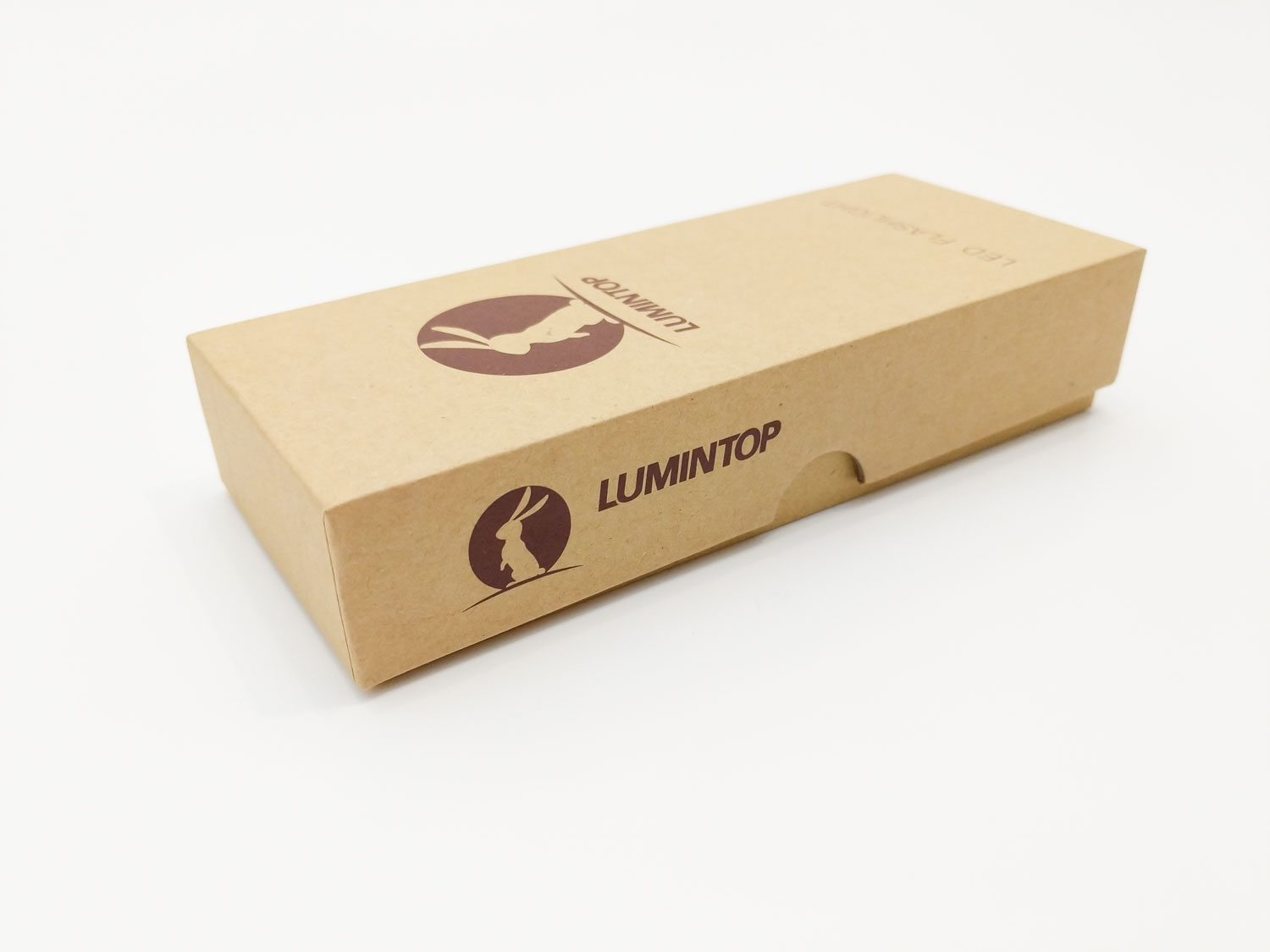 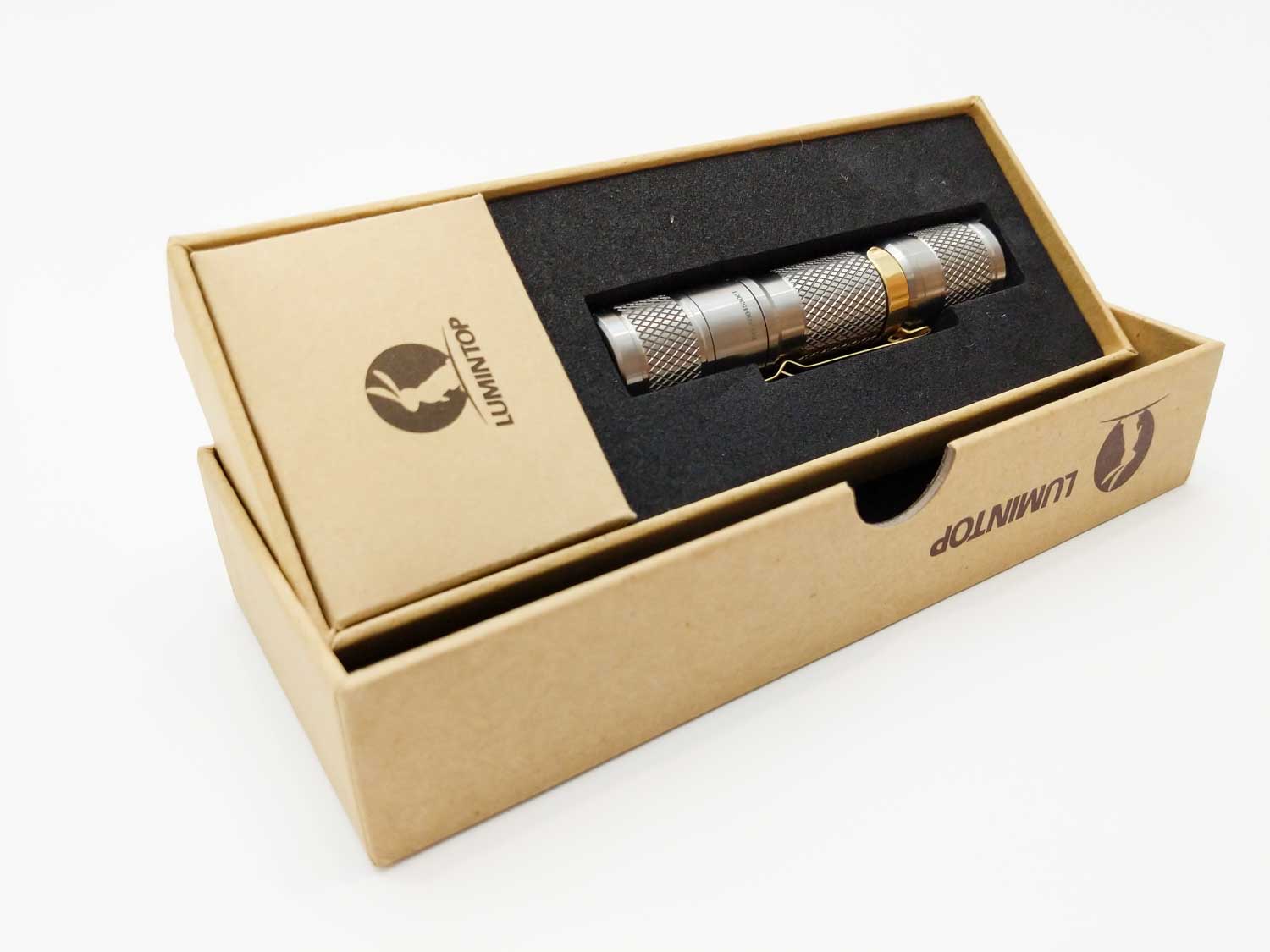 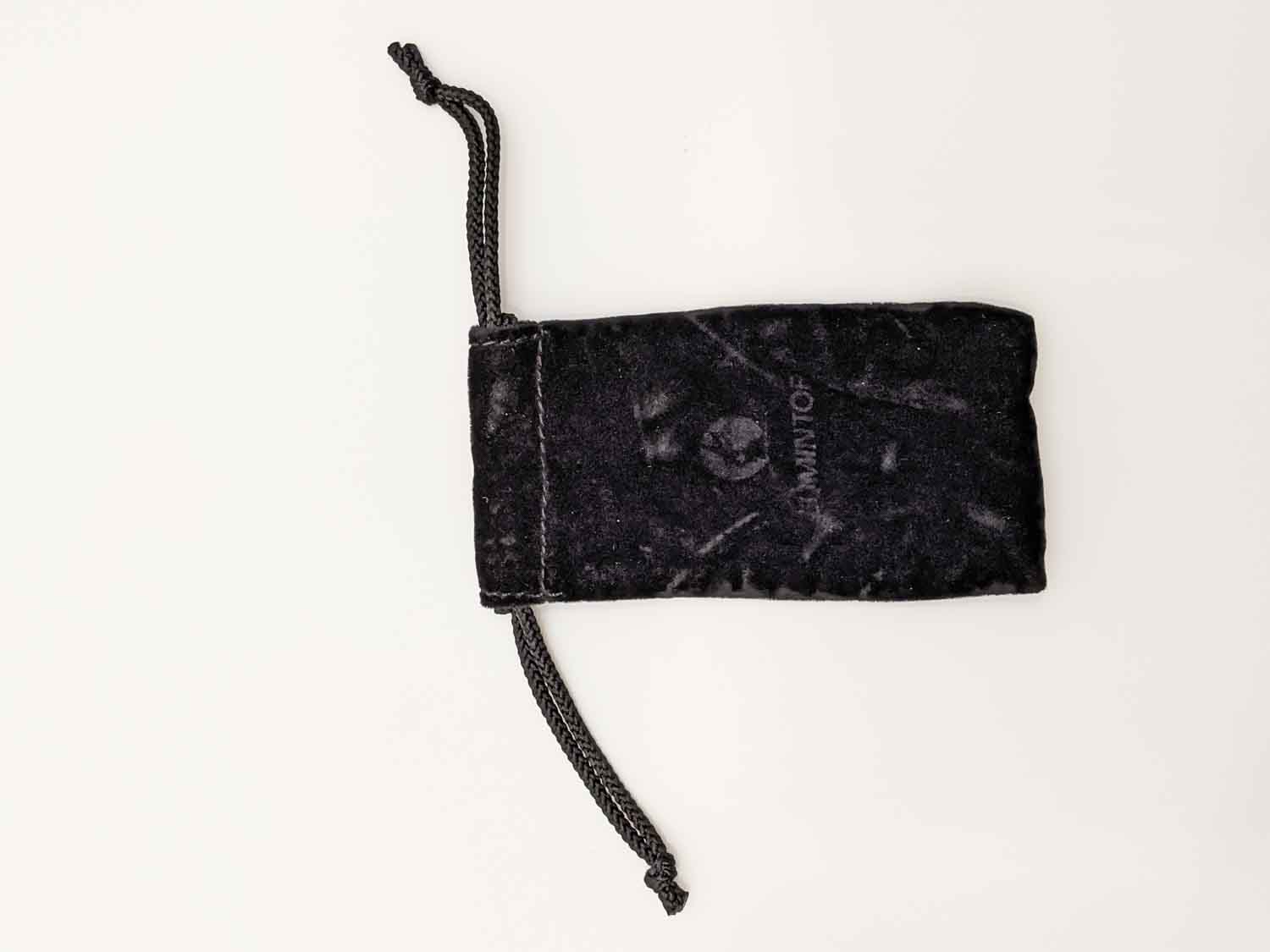 My first impression of the Lumintop Tool AA 2.0 Ti is very positive. It feels lightweight because of the titanium material, but it doesn't feel cheap. After inspecting the light, I could not find any flaws. It is well made and it also looks exquisite.
The knurling is great. It provides more than enough grip, and the blue-lighted tailcap adds a nice touch to it. (Keep in mind that the lighted tail cap only works with 14500 batteries. When using AA batteries it doesn't the lighted tail switch doesn't work)

The forward clicky provides enough feedback and works flawlessly. Tailstanding is also possible, which makes it a very practical light.  Together with the provided diffuser is serves a good function as a bedlight lamp (although the low is not low enough since the lowest mode is still 16 Lm)

Its size makes it a very pleasant EDC light, since it is slightly taller than an AA battery. It is really easy to hold, and after 1.5 weeks of use, it is currently my to go EDC flashlight. I'm quickly grabbing it for any practical use. 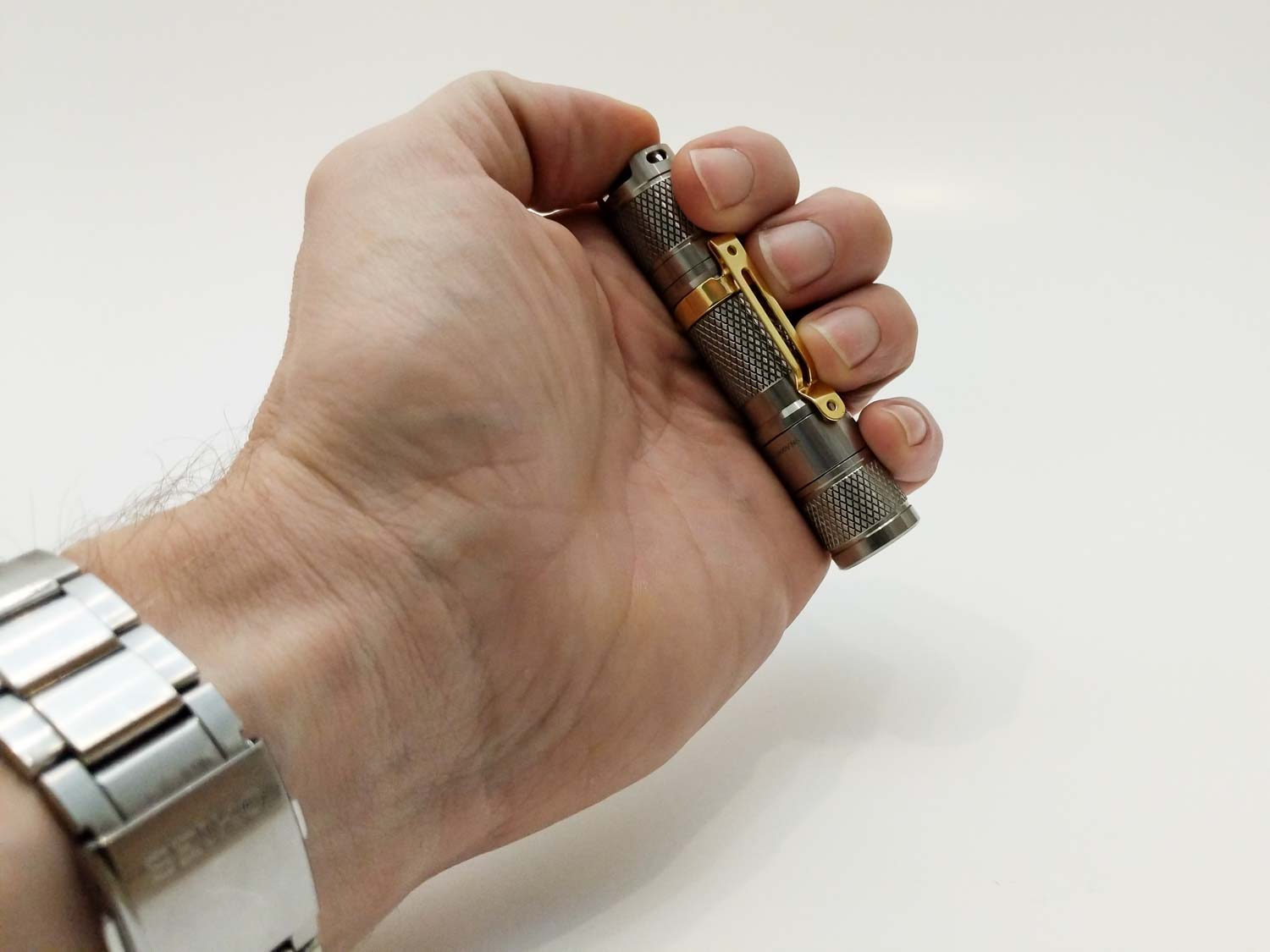 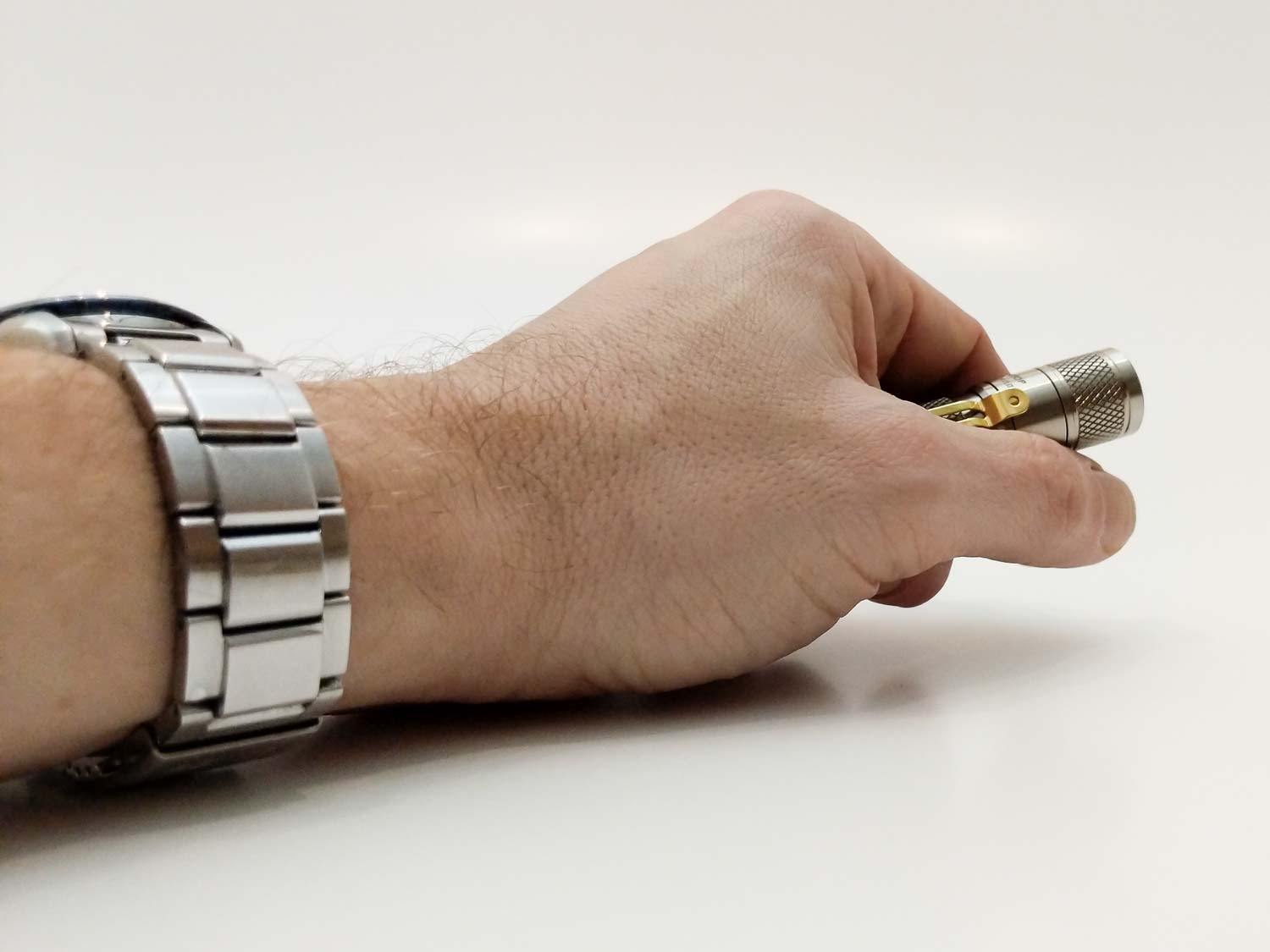 Knurling is done very well, Lumintop calls it ‘exclusive knurling’ as it does not only have the usual cross-sectional knurling, but there is also a small milled groove inside the cross sections of the knurling.
The titanium light is fabricated very well, the threads are perfectly rectangular shaped and do match together perfectly.
One funny fact is that the tube is perfectly symmetrical, so you don’t need to take off the clip when you want to carry it reversed, you can also screw it together reversed.

The O rings seal the light exactly and do not show any signs of wear. No burrs or flaws are found. This light shows it is fabricated with very tight tolerances and it pays off very well.
Good job Lumintop! 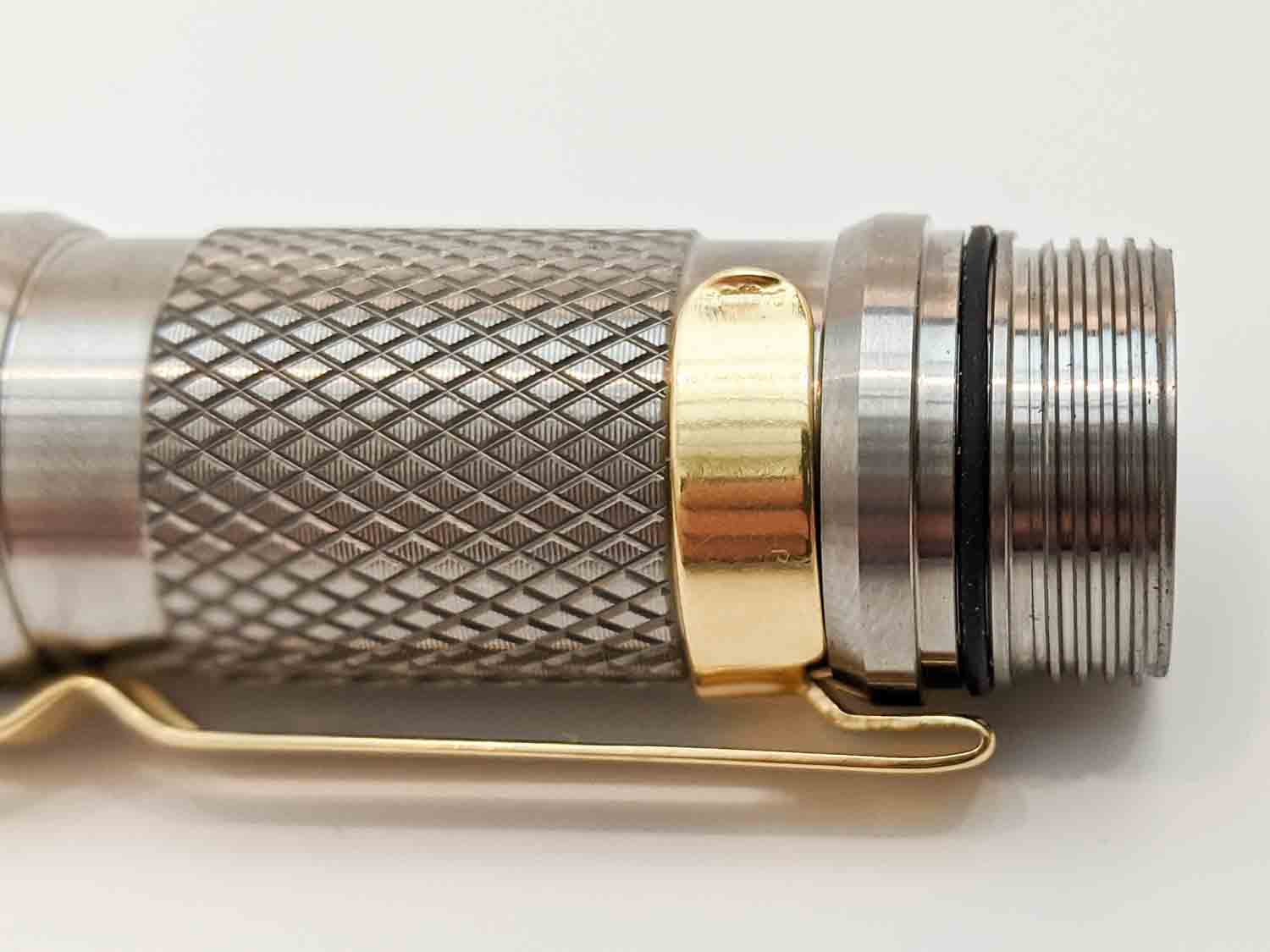 Ok, let’s talk about the LED. I keep asking myself, why do so many manufacturers use Cool white LEDs in their flashlights?
Is it just my personal favour, or is it something that the market demands? Or is it just a financial reason for manufacturers?

The Lumintop Tool AA is advertised as using a Cree XPL HD LED, but it seems they have changed it to the XPL2-HD. This particular LED is known for its unfavorable tint and corona. The color temperature is Cool White (almost blue), not directly a bad thing, but especially during the evening and during midnight, this is way too blue.
A warmer tint or another emitter would have been a better choice. (or at least the option to choose another emitter such as the Samsung LH351D in 5000K, or the Nichia 219C in 4000K would make it a lot better.)

The light uses a shelf design to dissipate the heat, the light gets fairly hot on Turbo, so all the mechanical parts are designed very well.

Apart from that, the light is very user-friendly, it uses a traditional smooth reflector and the beam pattern provides a good mix of throw and flood, as can be seen in the beam shots. 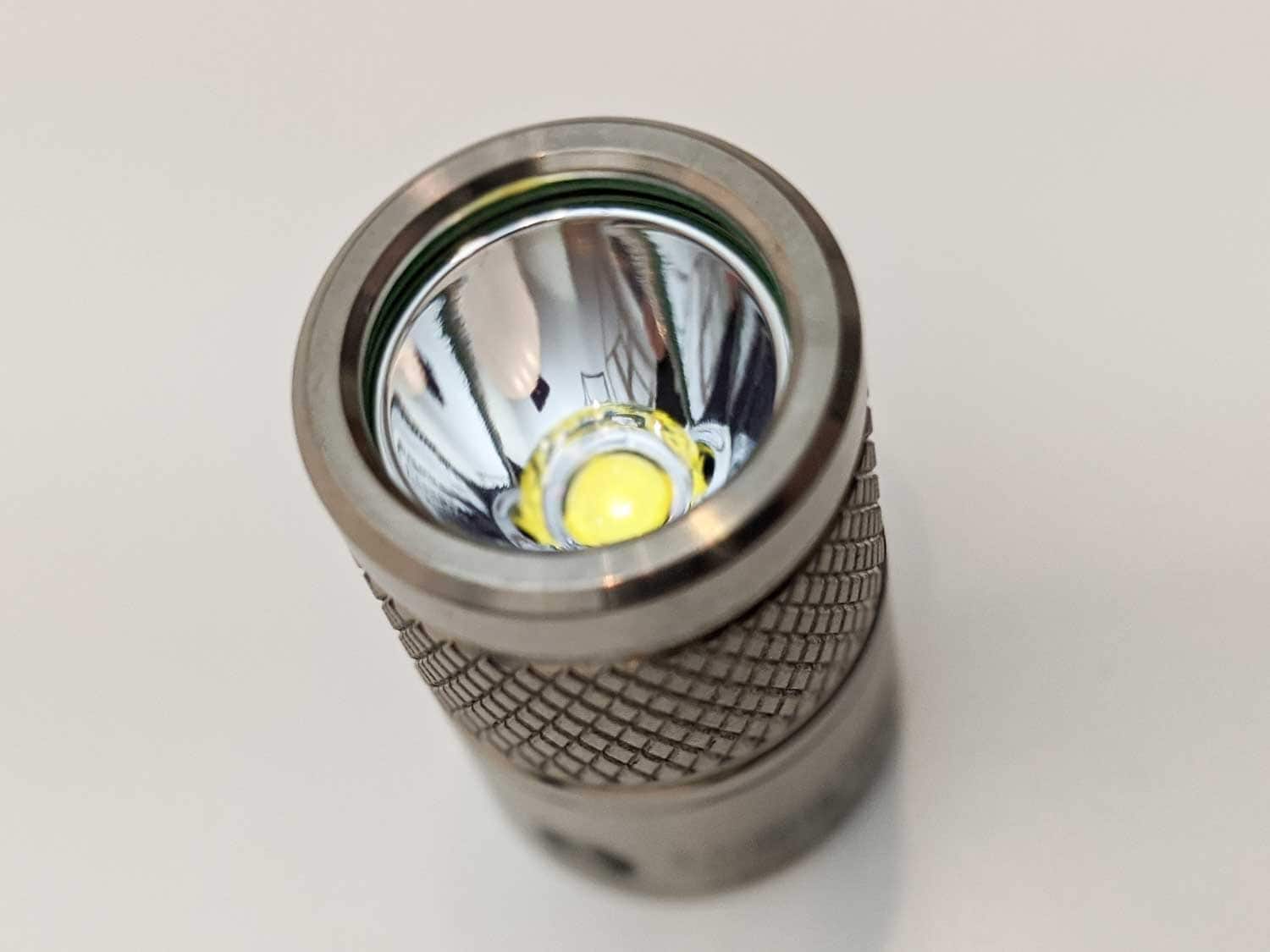 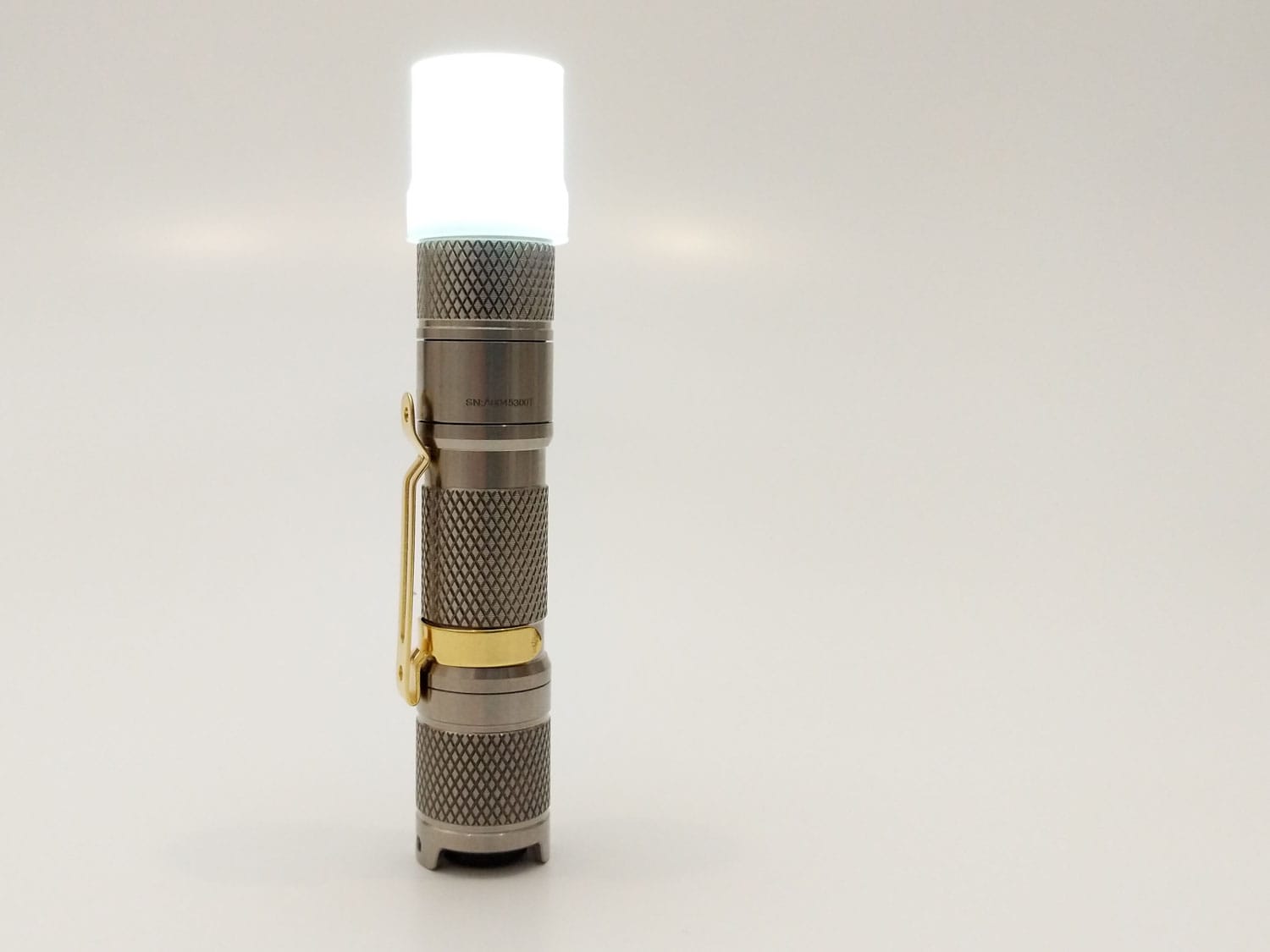 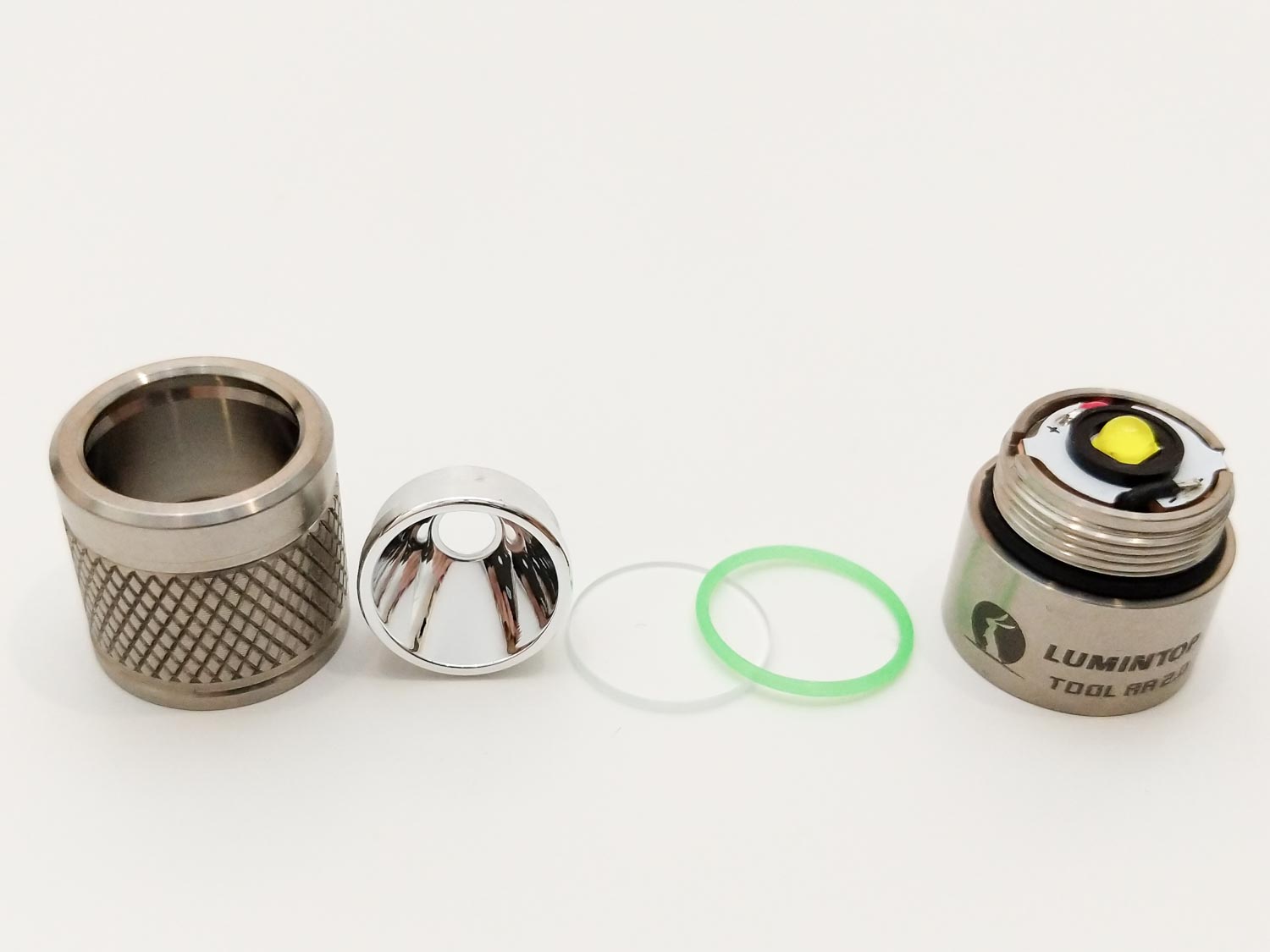 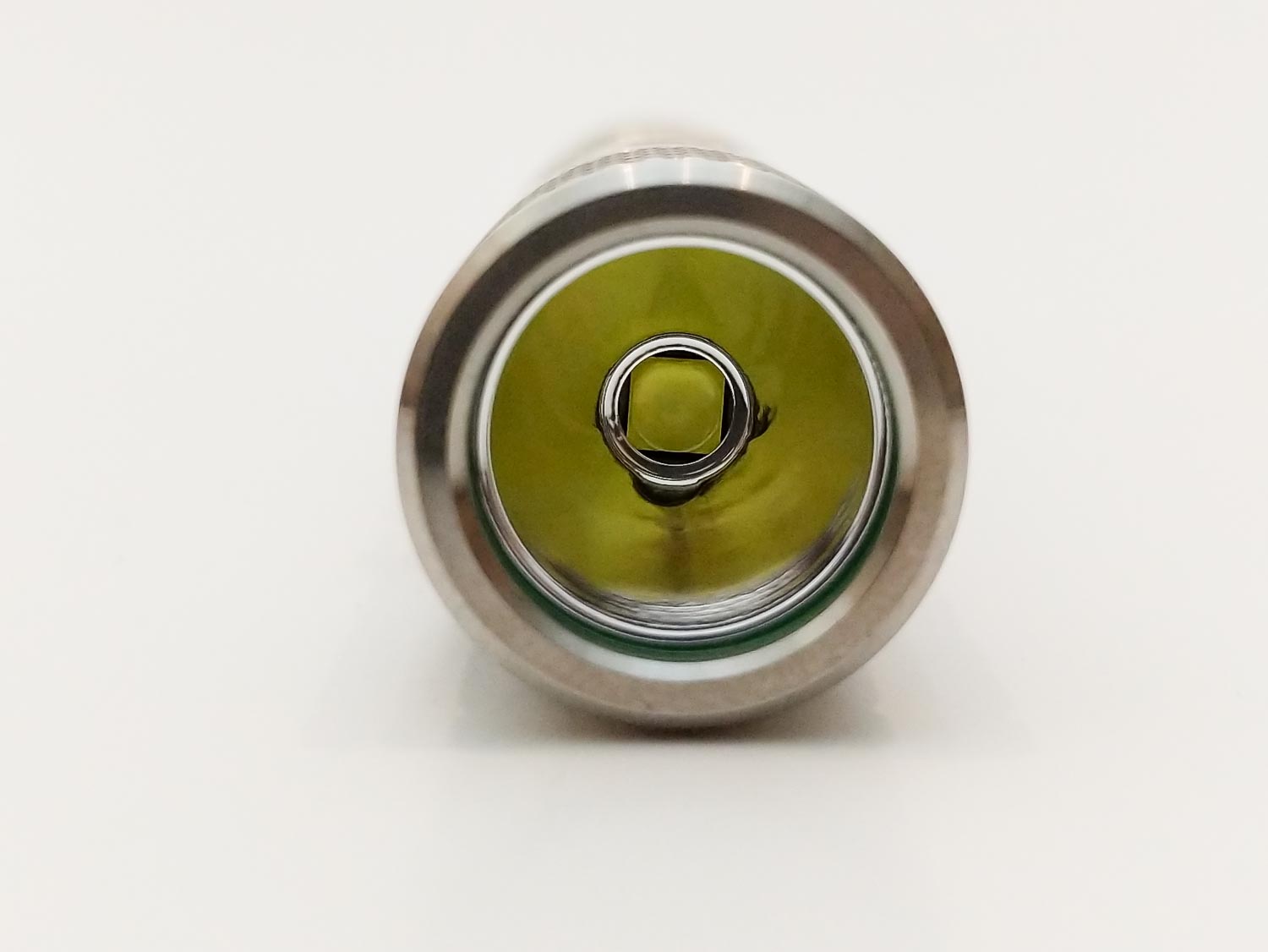 Size compared to other EDC flashlights.

The user interface of this light is very easy to understand. The Lumintop Tool AA uses a mechanical forward clicky switch and therefore uses a traditional way of operating.
It features memory mode, and has 4 main modes, Low, Medium, High and Turbo. Strobe is hidden and is activated by 6 taps/clicks.

A very positive thing about this light is that is can take many types of batteries and cells. While it doesn't come with a battery or 14500 cell, it can take regular AA type batteries, Protected and unprotected 14500 cells and even rechargeable NiMh batteries.
Since it does not provide a USB or magnetic charging, you have to use a third-party charger. 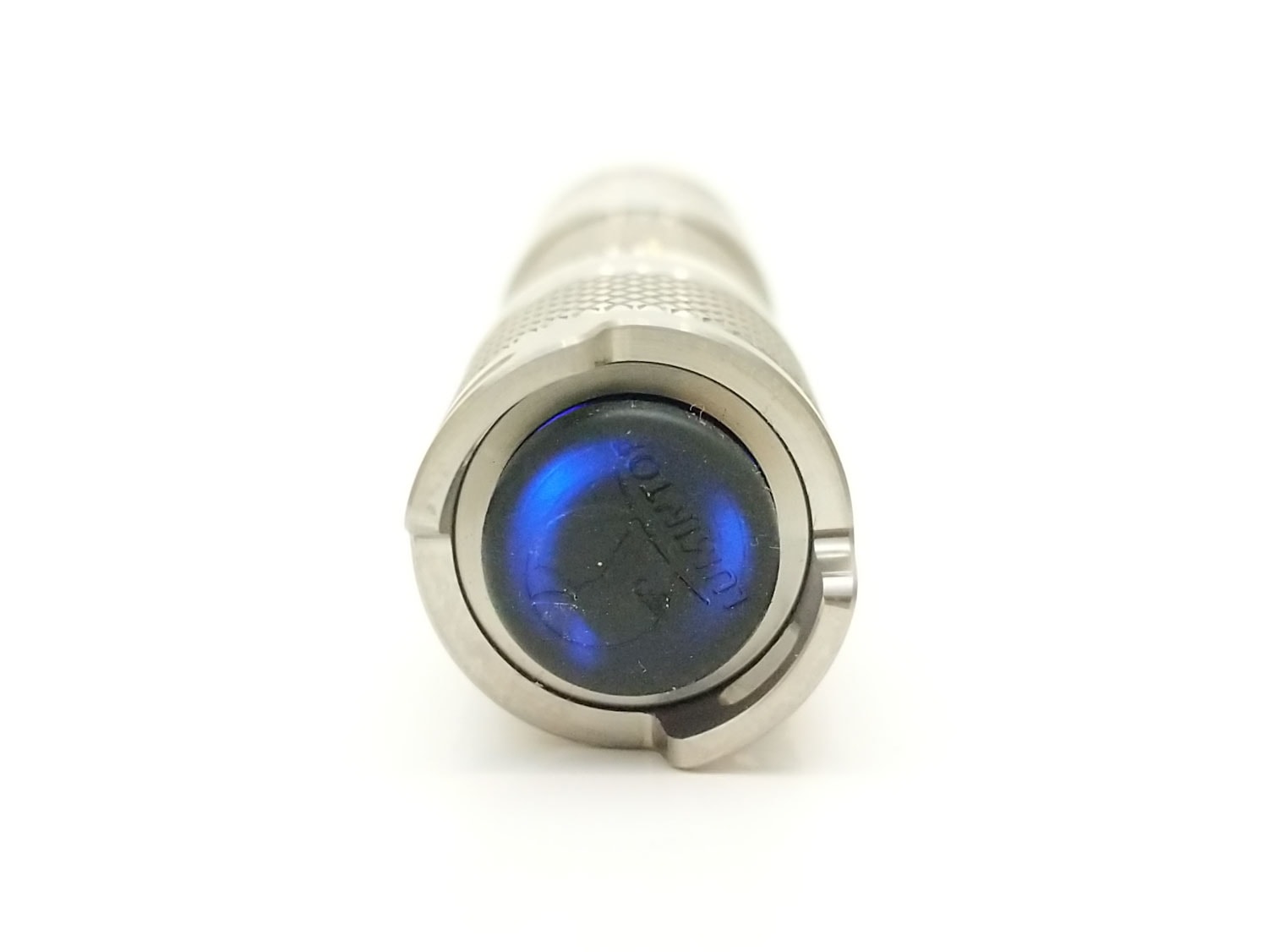 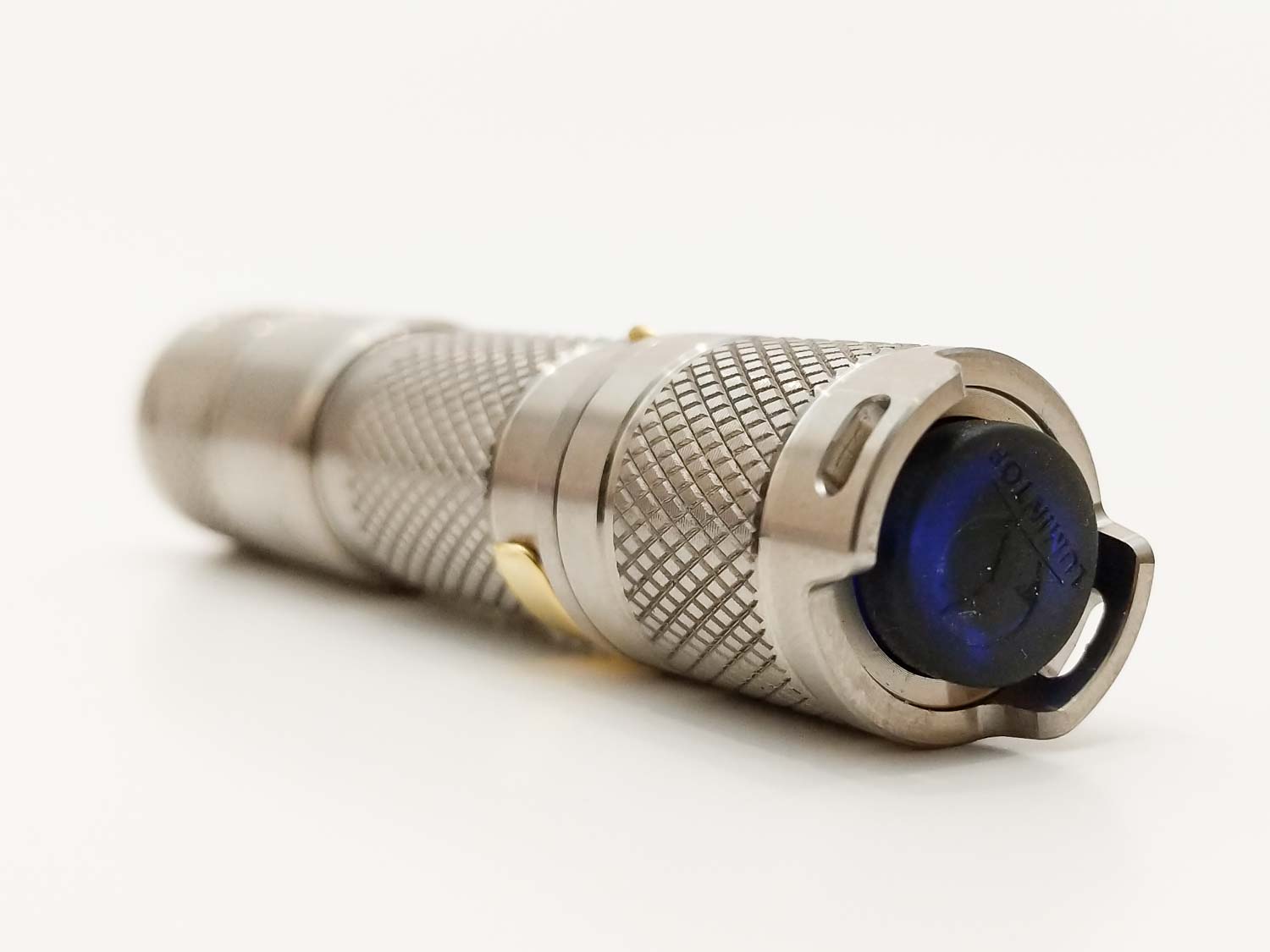 Notice: The above mentioned parameters are lab-tested by Lumintop by using a Lumintop 3.7V/750mAh 14500 Li-ion cell, Eneloop pro 1.2V/2450mAh Ni-MH and Alkaline cells, it may vary due to the difference of environment and batteries.

It seems the low mode is still quite high, using it at night will directly blind your night vision. A true 1 Lm low mode (or at least a lower low mode) would make it a perfect EDC light, and a perfect bedside light. For now, my Reylight flashlight stays on my night table, in despite of its larger size.

Note, For the Lumen/runtime results a deviation of +- 10% should be taken into account since I am using an integrating Lumen tube which is not officially calibrated, it is calibrated against lights with a known Lumen output.

During the runtime test of this light, the light suddenly went off after about 7 minutes!

The Tool AA Ti was too hot to handle. After cooling down and taking it apart, it became obvious that the light got too hot because the LED wire to the MCPCB just came off. It seems like it was a bad solder joint since there wasn’t any solder left on the negative pad of the MCPCB. (for those who are interested; they did solder the lead directly to the pad of the MCPCB and skipped the step of tinning the pad first, which causes suboptimal electrical- and mechanical contact)

The highest temperature I have measured was about 63 degrees Celsius. The temperature reading is not always very stable since it is very difficult to aim at exactly the same spot continuously with the IR thermometer, the last time I aimed a little different and read even higher before taking the final reading, so probably the light runs even hotter.

Luckily I was able to solder the wire to the MCPCB pad again, but I do not recommend this light to be used on Turbo for a long period since it gets very hot.

The Runtime test had to be re-done.

EDIT 2: so I charged the battery again and ran another test. At almost the identical time, the light went off again! After letting it cool down I took it apart, and now the positive lead to the LED had come off the positive pad of the MCPCB !

Luckily I was able to repair it (yet again). For now, I’m done with testing this light, maybe I will give it another shot later.

14500 batteries are not recommended! Mainly to compare the difference in tints. In the first picture, we have Reylight Ti Lan (Nichia 219c 4000K) left,  compared to the Lumintop Tool Ti AA 2.0, right.
In the second picture we see another comparison with 3 other flashlights, namely, Amutorch SS, Reylight Pineapple and Enogear. All of them using the same Nichia 219c 4000K emitter. 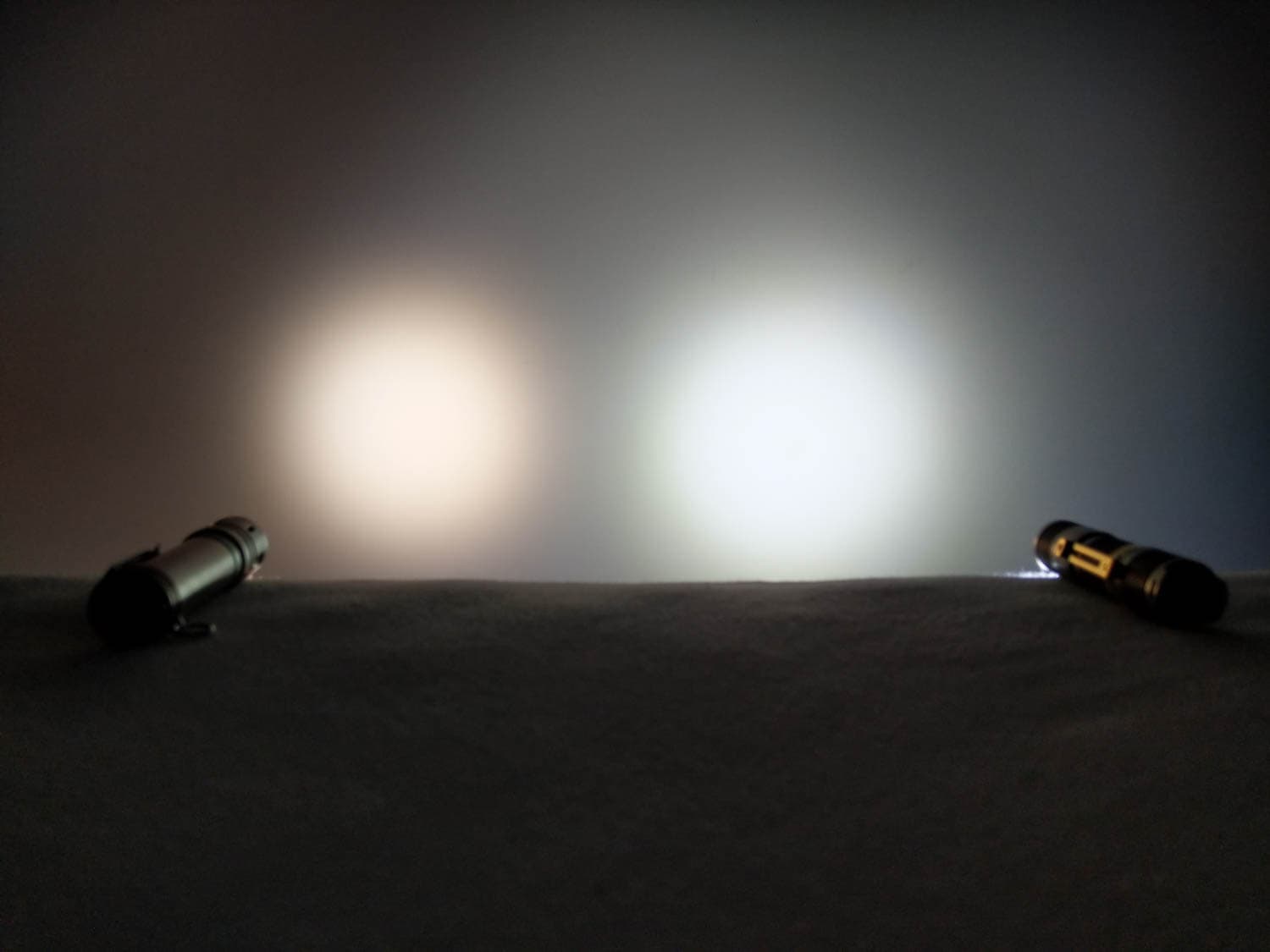 Disclaimer: This flashlight was sent to us for review at no cost, by the manufacturer. We have not been paid to review, nor have I been holding back on problems or defects.

Lumintop has released a beautiful lightweight EDC flashlight, that is well built, with durable titanium. It's not glued together and has a nice lighted tailswitch. It has all the ingredients for a good recipe.

However, there are a few cons.

My first concern is the Cool White (blueish) tint, they should have chosen a warmer tint.  The Lowest mode is still too bright. The last and probably most important thing, the light gets too hot on a 14500 battery.

This is found after performing 2 runtime tests where the LED wire came off the MCPCB due to excessive heat. Therefore, I will not be able to give it 5 stars, nor 4 stars. It's a great flashlight with NiMH batteries, but not with 14500 batteries.

The second runtime test surprised me with the exact same effect, but this time, the other wire came off.
If Lumintop will improve these mentioned items, it will receive a higher review score. This beautiful light deserves some improvements.