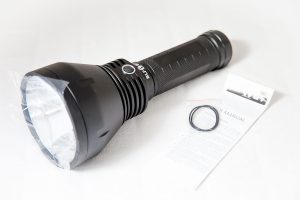 The Lumintop BLF GT is a next generation super thrower, commonly referred to as the GigaThrower.
This light was developed by members of BudgetLightForum, in collaboration with the renowned flashlight manufacturer, Lumintop.
The project started back in 2016 and updates slowly rolled out the following year.
In December 2017, the 2nd iteration of the light was developed and approved by the BLF team to start mass production.

While it is hard to qualify this light as a contender for the Best Flashlights of 2017, it definitely fits in the list for 2018; actually receiving honors as the farthest throwing LED light of the year!
Having ordered mine in 2017, I received it in 2018.
The pictures probably don't do justice to its actual size. Seeing this light in person is what makes it so exceptional.... Let's take a look what this throw monster has to offer. 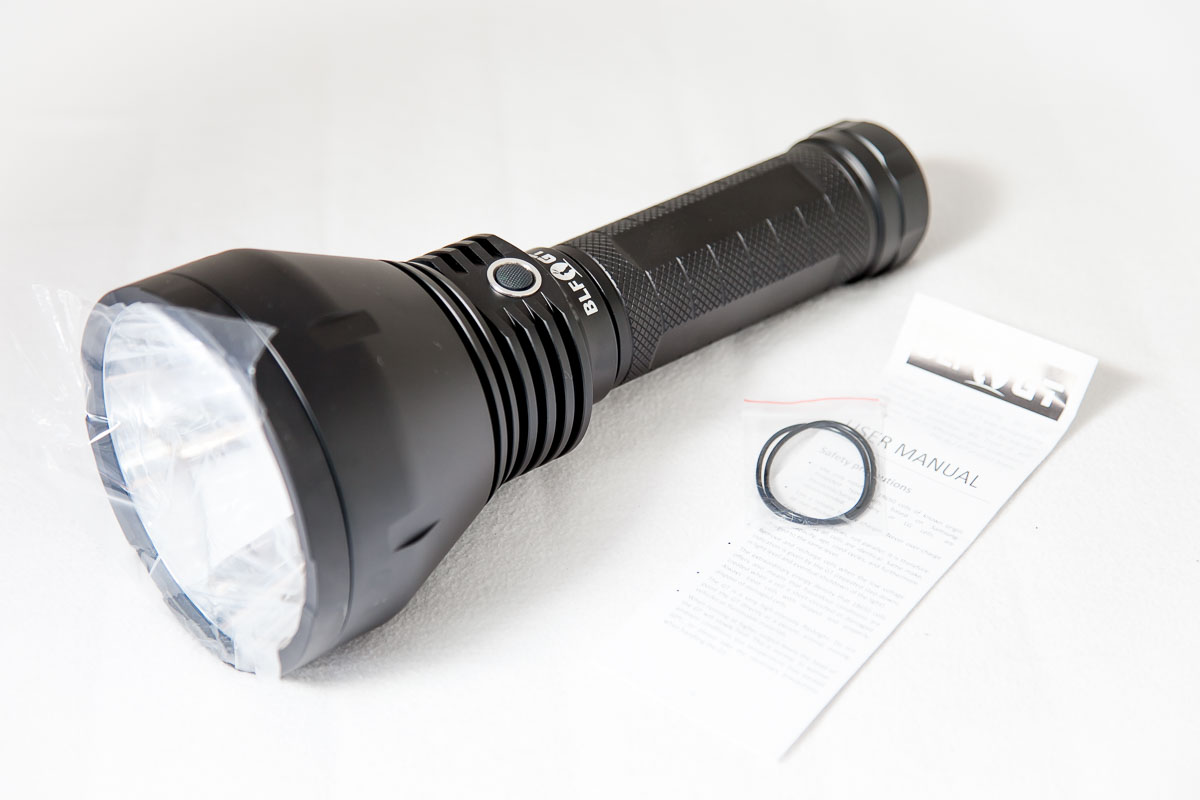 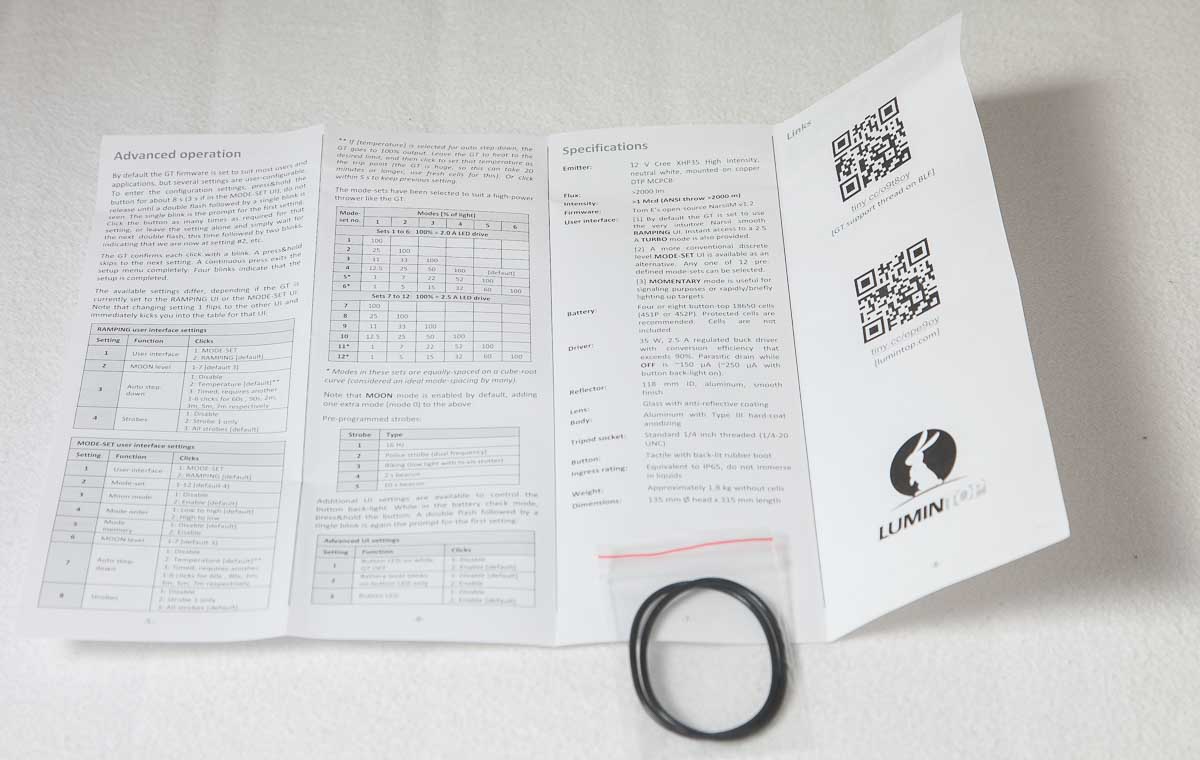 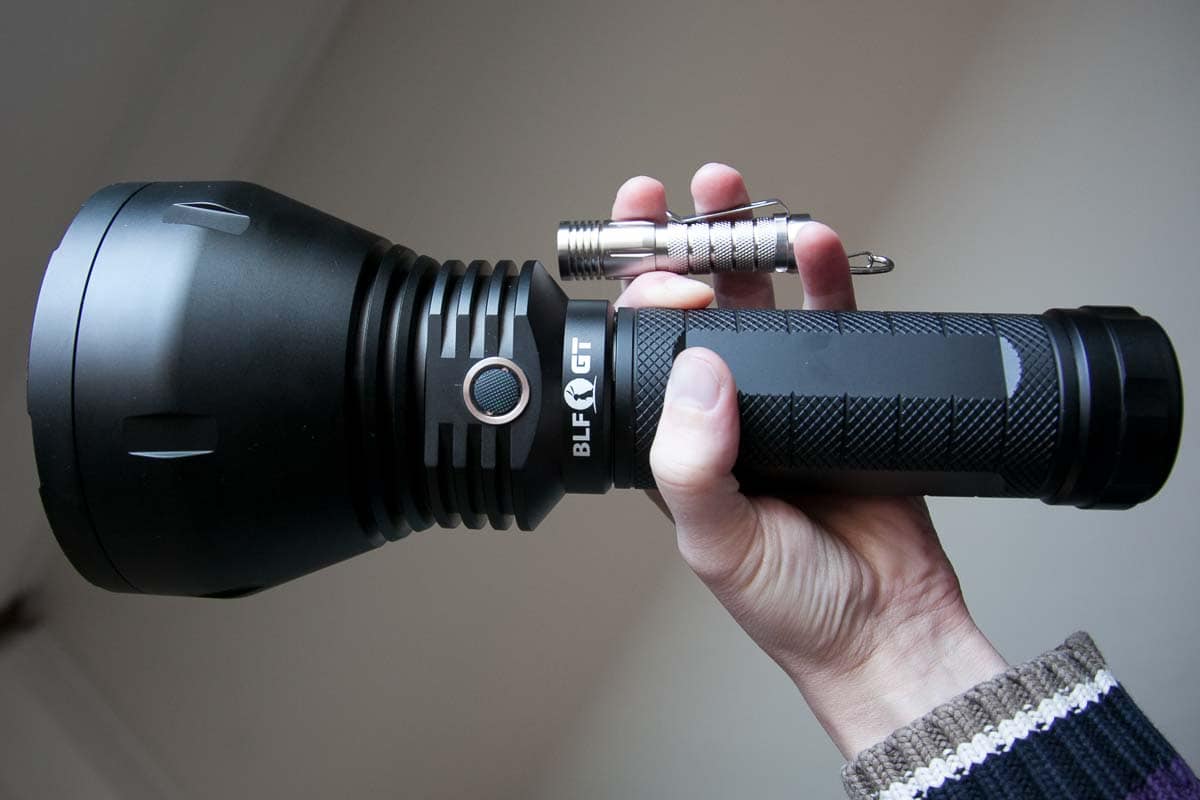 Holding the BLF GT, the first thing you notice is that it definitely isn't one of the easiest lights to handle one-handed. If you have small hands, this light might not be suitable for one handed operation. I imagine that for most buyers, the GT won’t be used too much for practical work, since it's not a Tactical Flashlight nor an EDC light.
It's quite fun playing around with it, but finding uses for it is difficult for us enthusiasts.
If you are only using 4x 18650s (it works on 4 and 8 cells) you should put the carrier with the batteries towards the backside of the light. This helps with balancing. Otherwise, the center of gravity is towards the head, and becomes front-heavy.

Unfortunately I noticed that the holes for attaching a carry-strap are not lined up straight, nor are the flat parts on the body matching with the side switch. If you attach the strap, the button is actually on the bottom of the flashlight, and not on the top.... See the pictures below. The tailcap has the other attachment point, which can be moved around... It can be seen as loose, but it’s actually a neat feature for moving the tailcap around.
The tube is quite thick, but this is to be expected for an 8*18650 battery tube that has to include multiple carriers. 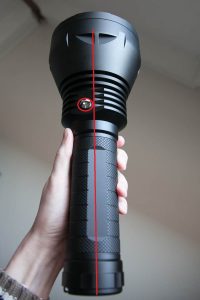 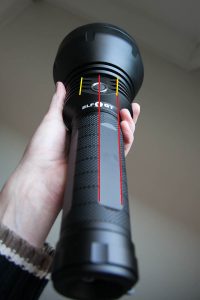 The body diameter is also a little on the wide side, but this is to be expected for a 4*18650 battery tube including battery carrier!

I also do photography work, and I own a Manfrotto tripod with a 029 head. The head surprisingly takes the Manfrotto hexagonal quick release plate. And guess what? The thread doesn't fit correctly. If you look at the pictures linked above, you can see the ring they put in the tripod hole, but the head is too close to the hole to attach to the quick release plate. Of course, you can add an adapter, but not everybody owns one.

The GT body possesses quality knurling, without any sharp edges. That being said, it is slippery. Take a look at the picture to see the knurling up close. 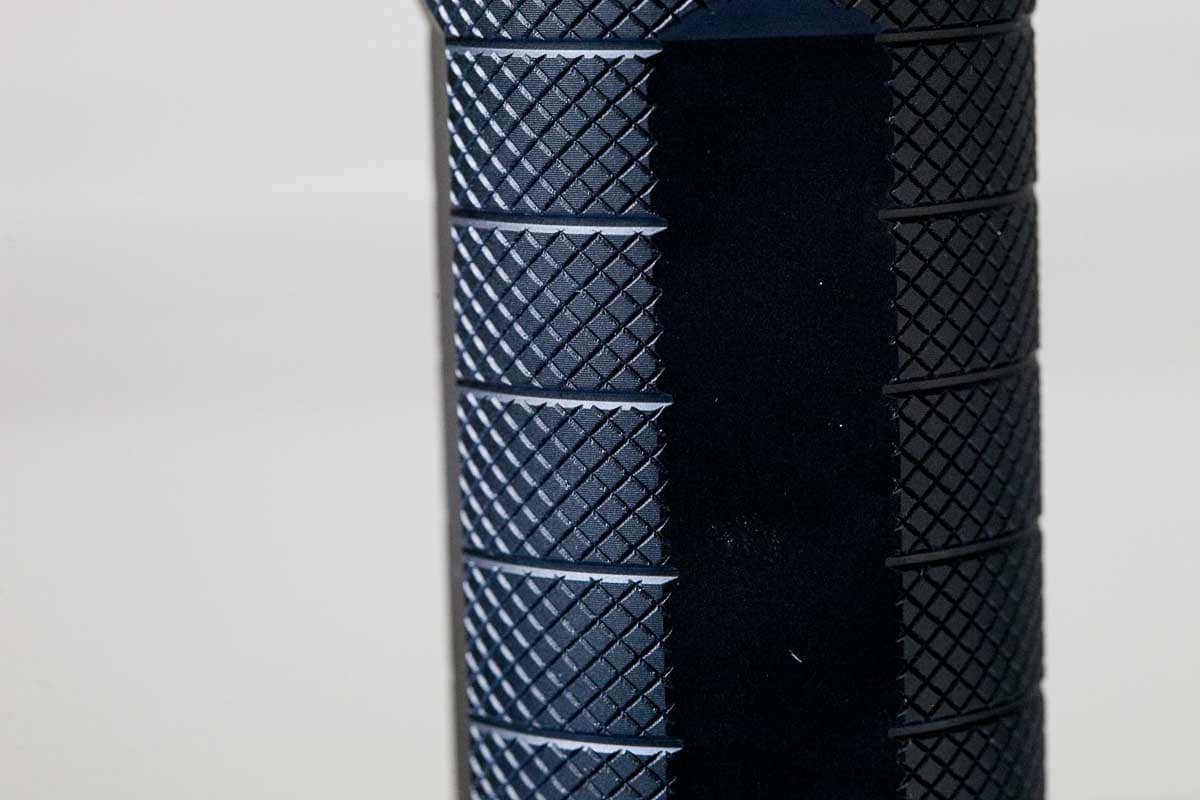 The anodizing has been well applied. But I am not completely satisfied with it. This kind of glossy anodizing tends to accumulate fingerprints and dirt, which I do not like.

As seen in the picture, the printing is done well. Nothing to complain here, but it isn't very exclusive either.
Threads came completely dry. This can be a con for some people. For me this isn't really a problem, as it gives me the opportunity to clean the threads and put new lubricant on them. The O-ring are lubed. The threads are a bit loose side when screwing onto the head. 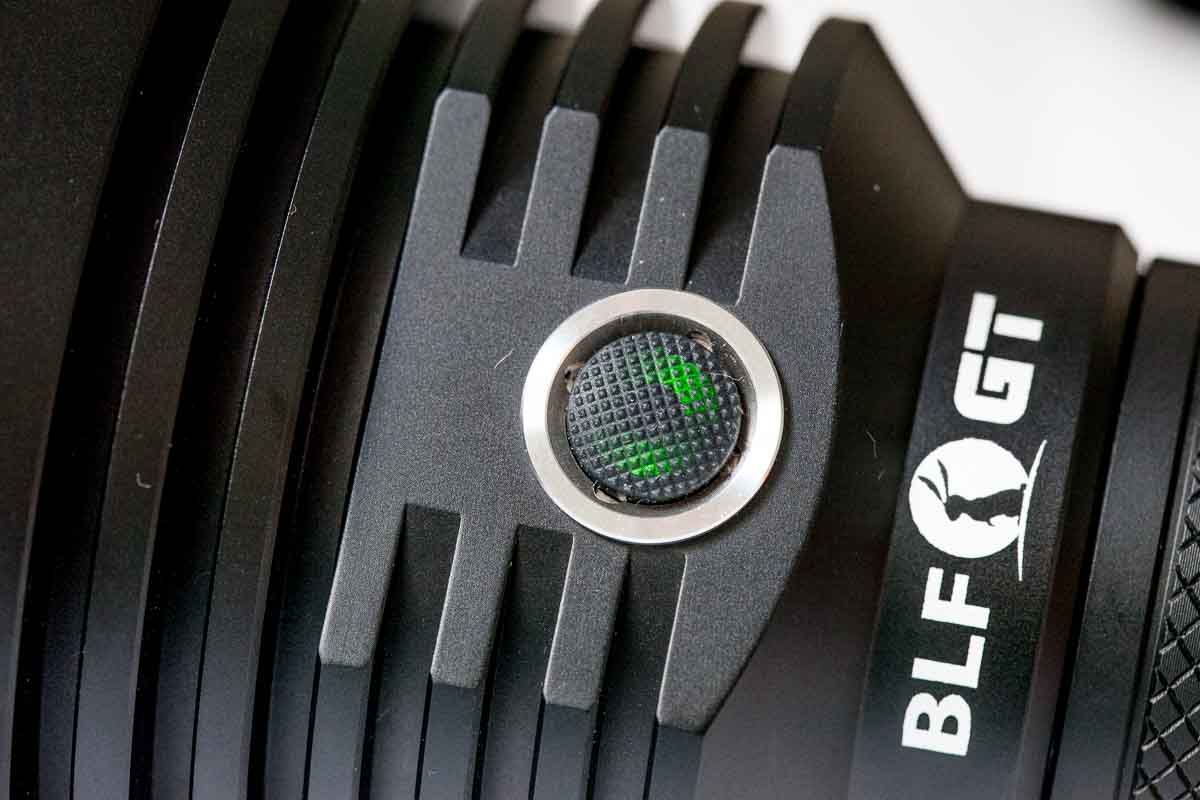 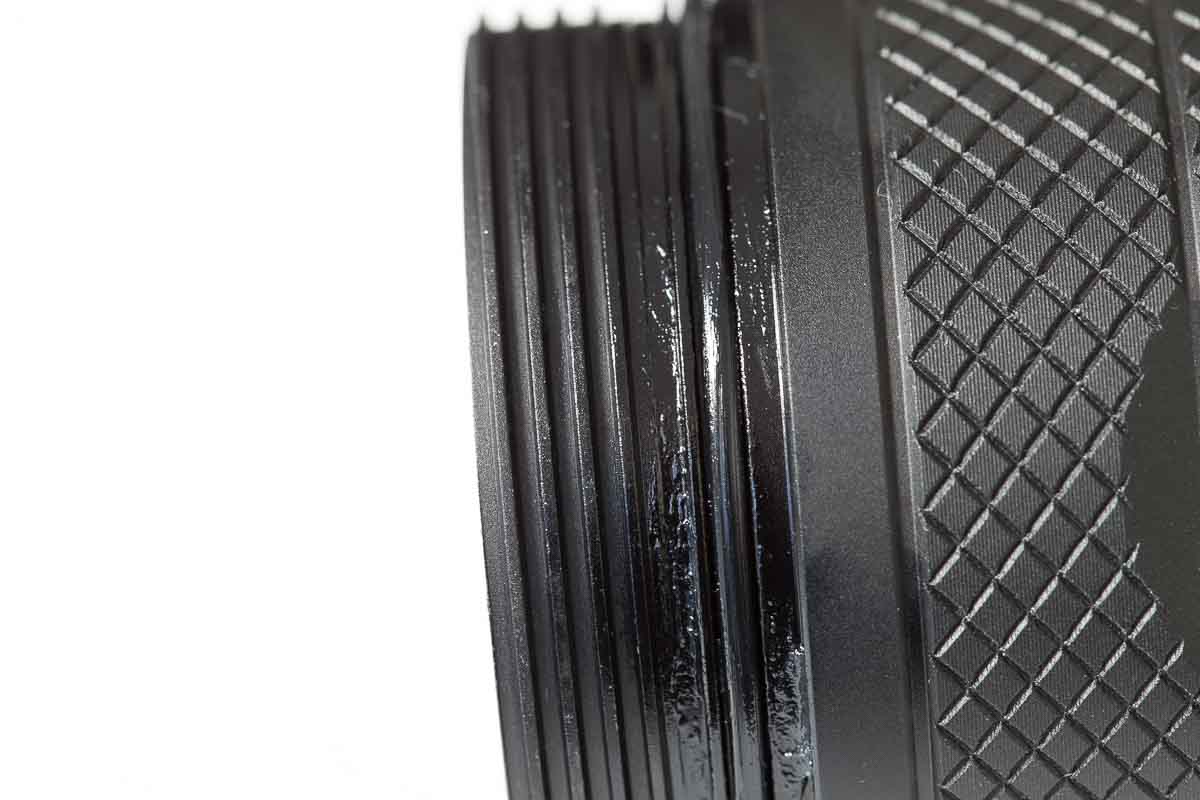 The reflector is made out of plated aluminum and is smooth. But not smooth as butter! At least mine has some noticeable machining rings.

The bezel is just plain anodized aluminium, not stainless steel unfortunately. This means that a drop on the concrete can damage the bezel and making it impossible to take it off.
I couldn’t even open the head. 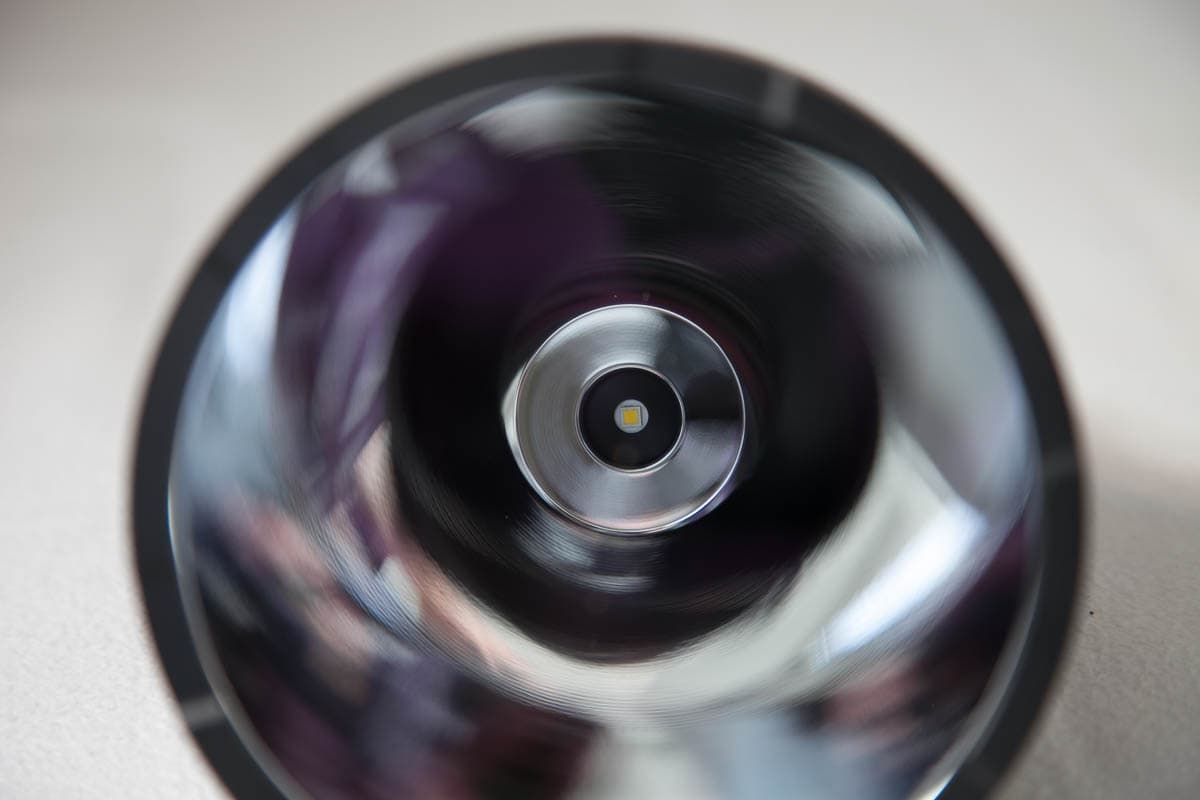 The battery carrier has a metal construction. You have to use Button top batteries! But they can be very snug. I used protected NCR18650B panasonic batteries, and they fit but tight.

Unprotected, flat top batteries don't fit in the original carrier! The carrier has an extra layer of protection for reverse polarity insertion in the form of a plastic disc. Be careful still.

This plastic "washer" can be taken off so it is possible to use Flat Top batteries, as I have tried. See the pictures. But, with unprotected flat top batteries, they are almost too short for the carrier! They do work, but with hard bumping, the light can turn off!

You need to use 2 battery carriers to get the light working. However, you don't need to run all 8 batteries as the light will run on either 4 or 8 batteries. If using 4 batteries, running them in the carrier towards the tailcap and leaving the empty carrier towards the head will give you a better balanced light. It uses dual gold plated phosphor bronze springs, meaning resistance isn’t an issue, even with only 4x cells.

Dimensions and weight of the BLF-GT:

How to mod the battery carrier to fit flat tops.

WARNING: WARNING: This will void your warranty if something goes wrong! Only do at your own risk! Removing this "protection" will open the possibility of reverse battery insertion, and can damage the light’s springs, shorten the batteries’ life, or even kill them if the springs don’t melt. 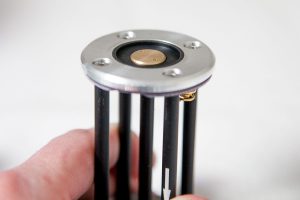 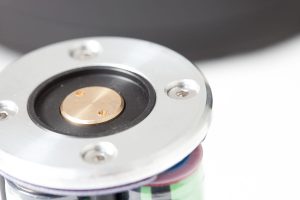 negative side close up 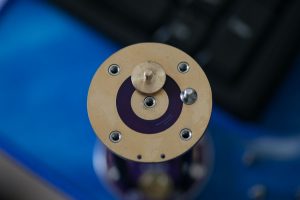 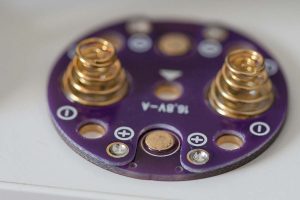 the "washer" for reverse polarity protection 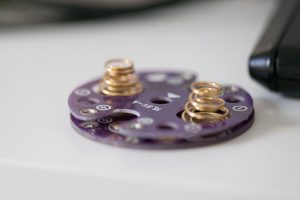 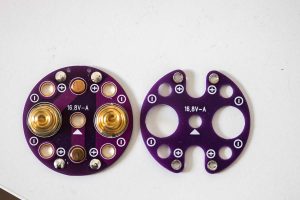 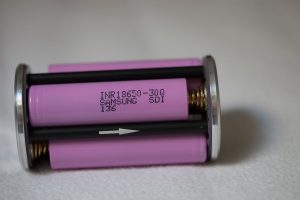 This UI has smooth ramping between 0% and 80%, while still be able to switch to the 100% Turbo mode with a double click as mentioned below:

The GT is by default using the Smooth Ramping mode. However, the GT can also be operated using a more conventional modes. (See next section for detail on how to set UI options).
Using the MODE-SET UI the output does not ramp, it steps from one mode to the next using single-clicks, just like with a usual flashlight.

Backlight of the switch: The backlight of the switch is turned on by default, when the flashlight is turned off. If you don't want to use this backlight you can simply turn off that feature by quickly switching the power on and off. Unfortunately it will only stay off till next use.
The parasitic drain is ~250 μA with the light turned on, and ~150 μA without.
Unfortunately the button they used is BLACK, so the backlighting on the switch is really hard to see! One can only wonder why they chose black..

The momentary on only works when you tap 5 times while in the ramping mode. It is not accessible while being in any "mode sets". It seems like you are only able to get out of this mode when doing a complete turn-off, like turning the battery carrier.

Max output in Ramping mode: 2A

I can't seem to get mine pass 1Mcd.. I measured at 20 meters and still couldn't touch the 1 Mcd mark. It might be my poor and cheap lux meter? Who knows.

It really is the best LED Flashlight thrower of 2018. If you are looking for something less throwy but with great punch and still throws farther than what your eyes can perceive, take a look at the Acebeam K65 I’ve previously reviewed. Being a thrower, it does not enter the brightest flashlight list by any means, but one of the best lights overall.

The first picture is an older Google Maps picture (road is now closed for vehicles). And I am standing at the yellow spot. The rectangular spots are the ones seen in the following beamshots. After the day-time picture follows the control shot. And the BLF Q8 in the last picture for comparison.

Day time. Circle is my position

For more discussion about this flashlight take a look here: http://budgetlightforum.com/node/50303

Extremely far throwing flashlight! It can reach further than your eyes can see. Its bigger than you probably like to use daily, but you could still get a carrying strap if you need to. 5 stars because it does everything that it needs to do.......