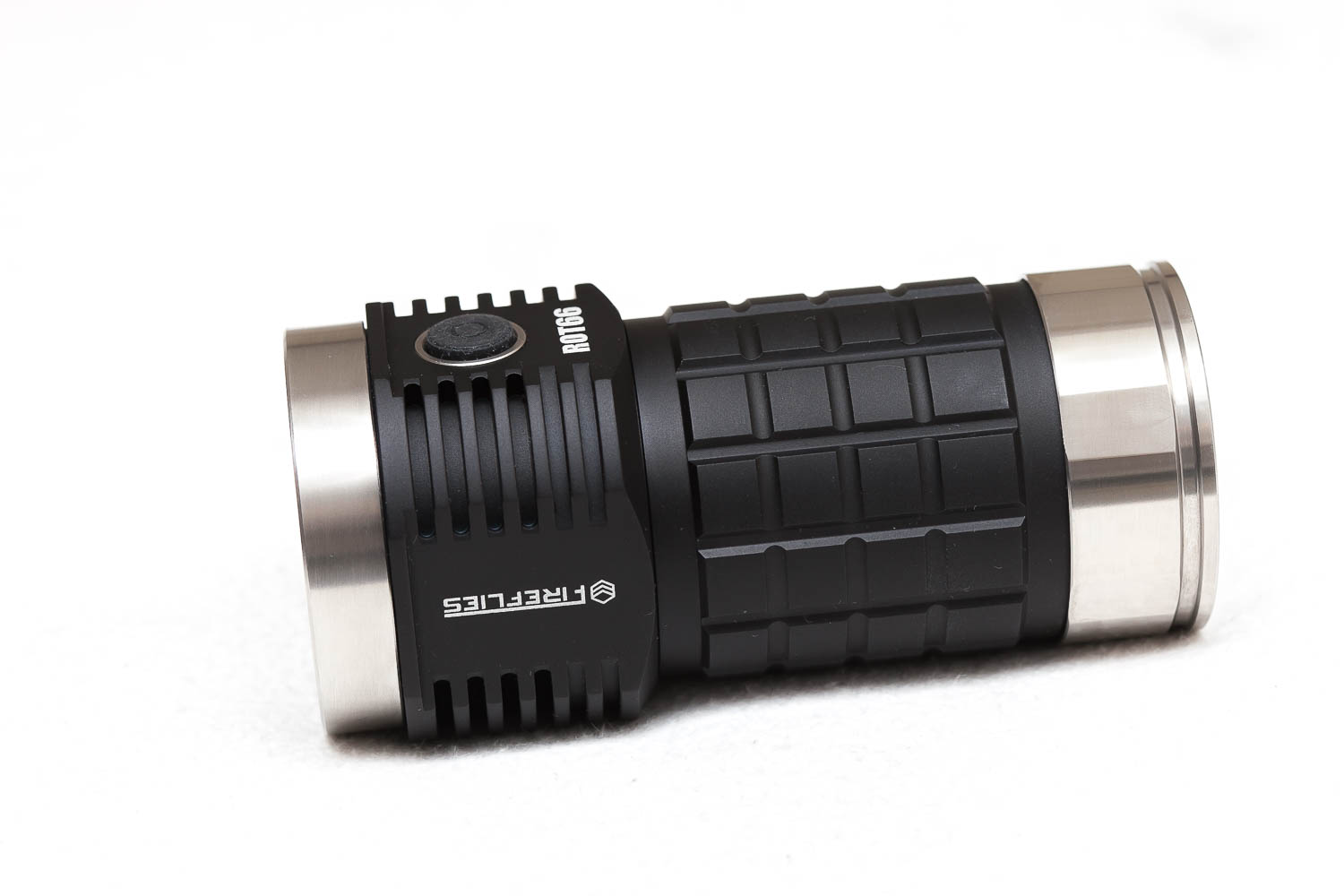 In 2018 we got surprised by Fireflies entering the flashlight market with a very successful flashlight, namely the Fireflies ROT66. It's a Hi CRI flashlight with an output of 5000 lumens. In 2019 they upgraded their flagship and included even more LEDs, 12 in total. They now also give you a wider choice of emitters, plus some nice extras. All in all, this is going to be an interesting review, especially if we compare it to its older sibling.

Upon receiving the Fireflies ROT gen 2, I noticed the exact same packaging from the 1st version. I assume they still had enough of them lying around, but I would have preferred to see a difference in packaging as well. Not saying that the quality is bad, its quality is better than even some premium flashlights. I'm talking about you Fenix... lol. I got some extra accessories as well. 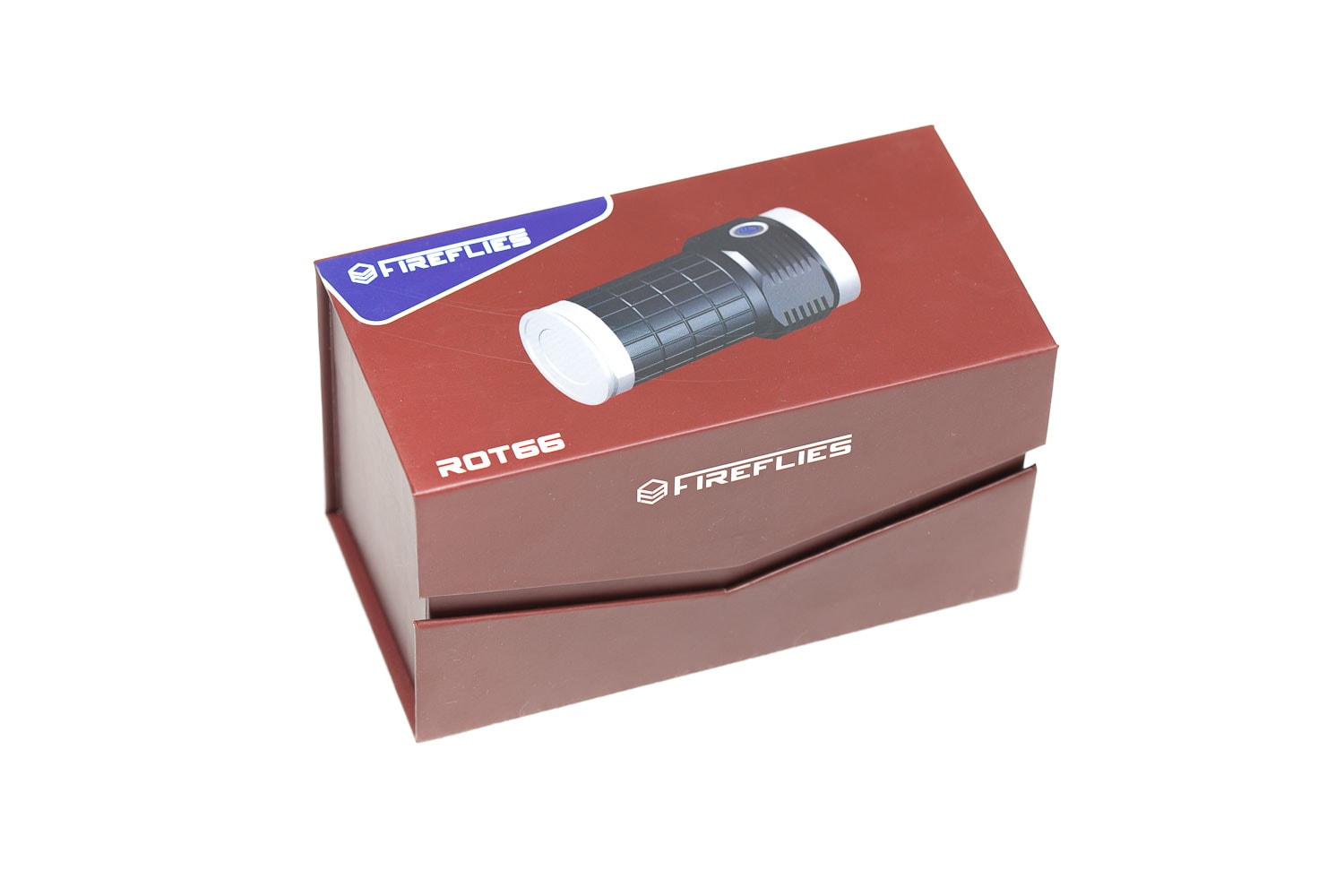 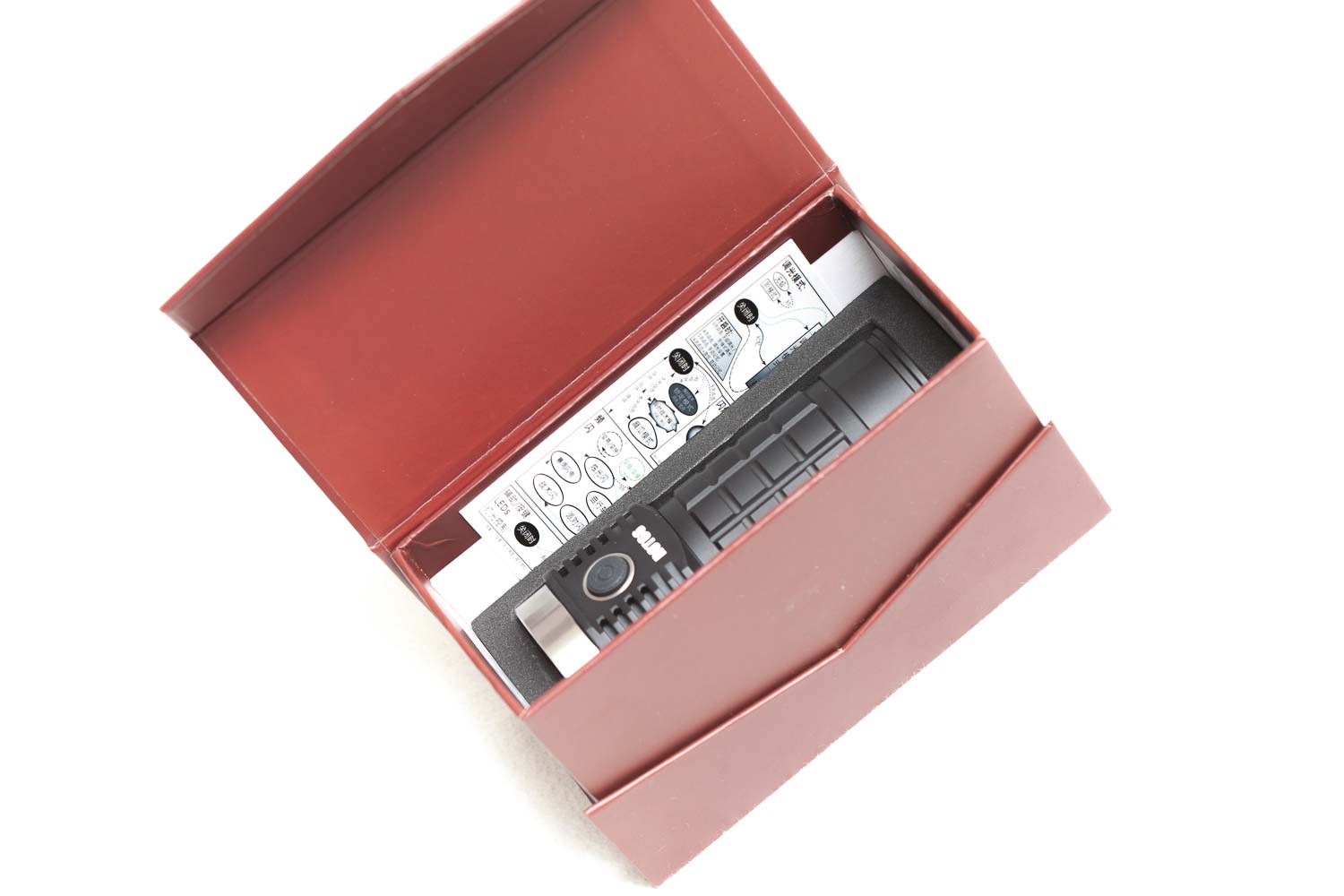 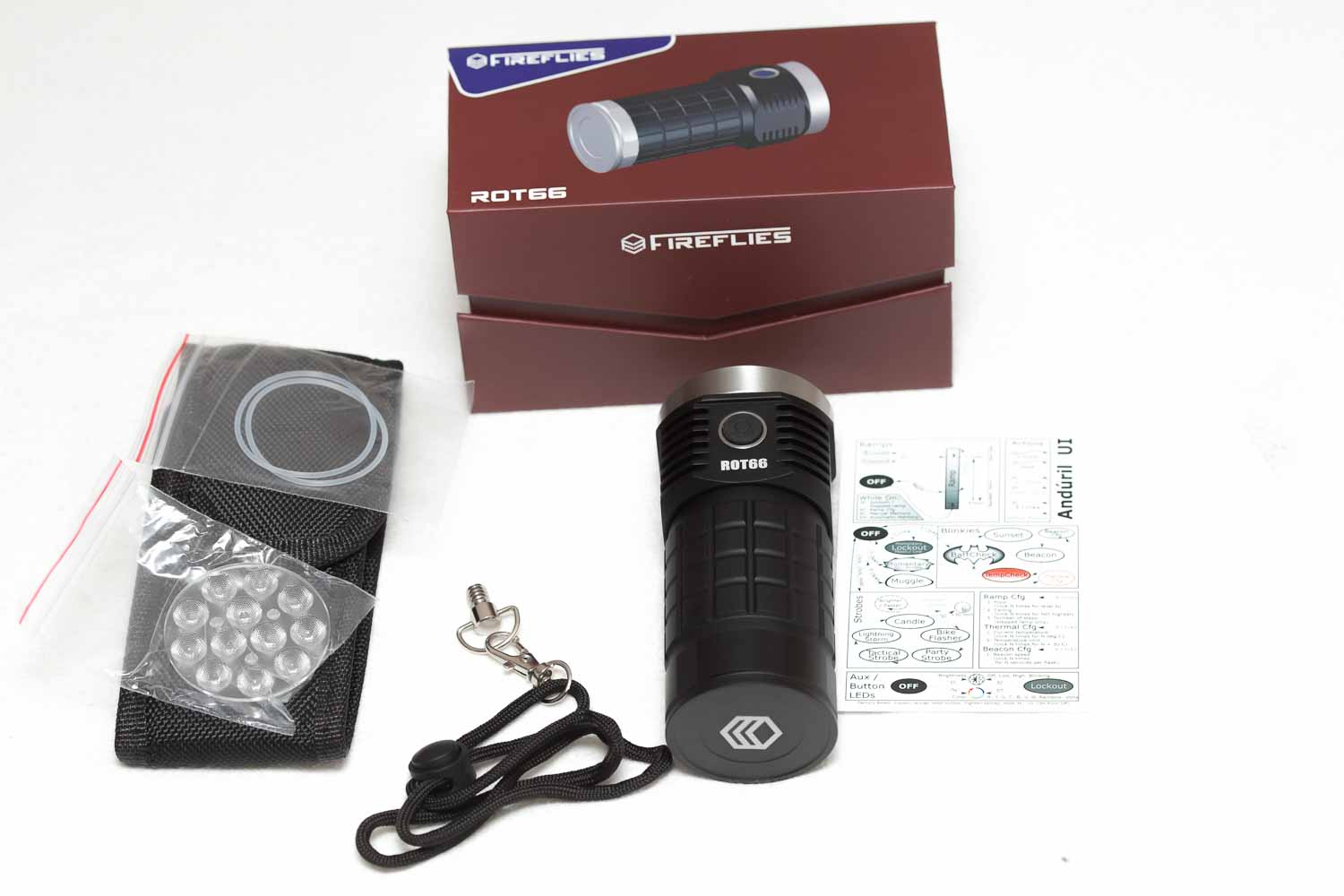 In comparison to their previous generation, this has rougher knurling. It doesn't only feel grippier,  it also looks better IMHO. The diameter hasn't really changed and being a 3*18650 flashlight it feels a bit more comfortable to hold.
Besides these aesthetic and functional improvements, they also changed the side-switch, which now protrudes instead of being flush with the body. It still doesn't feel very solid though. But, I have to say that this still an improvement over the previous one, and improves functionality! And on top of that, they increased the hole for the lanyard attachment so it now fits a normal tripod mount! 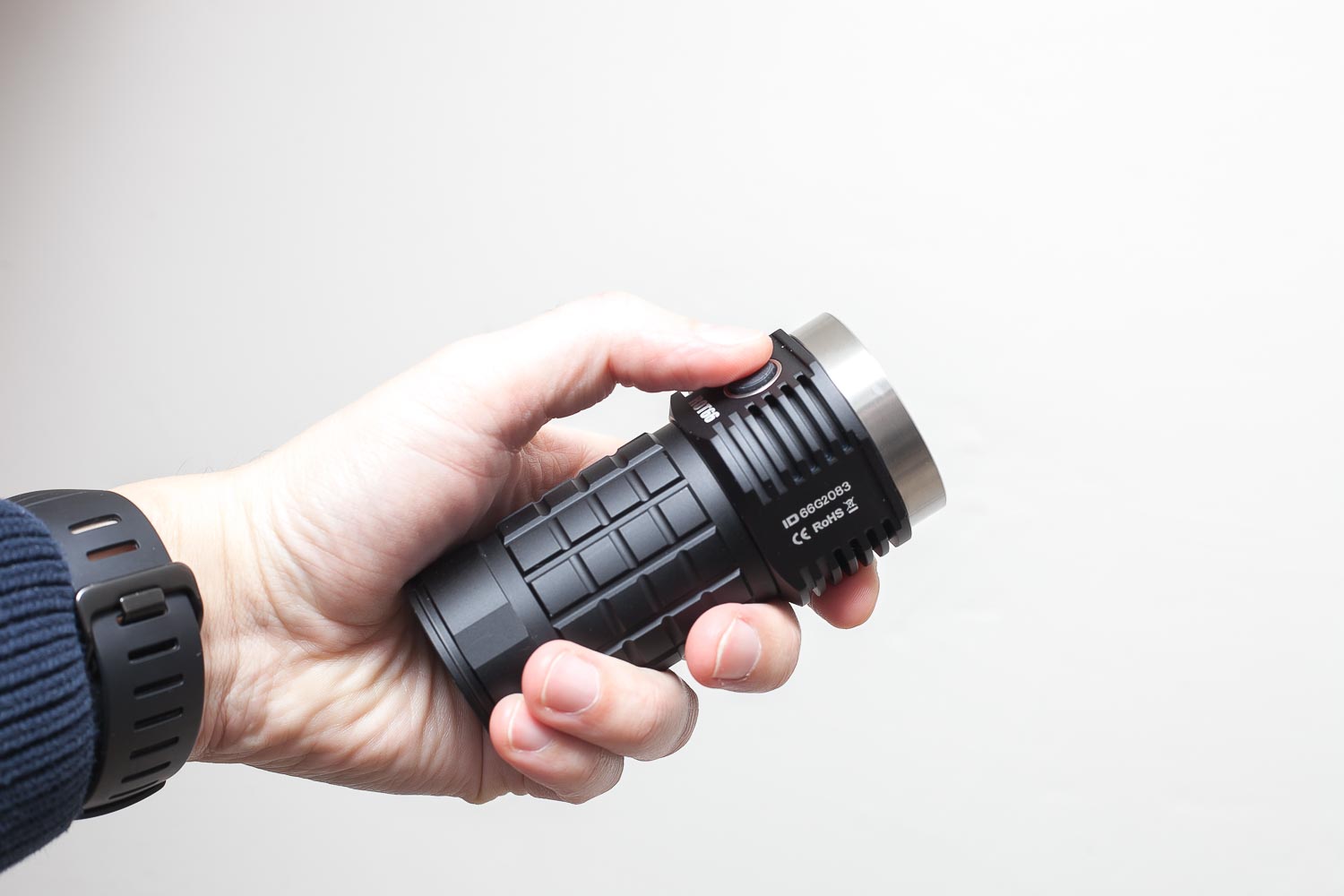 FireFlies produces high-quality products, and the ROT66 gen 2 doesn't disappoint either. The anodization is done well, just like the machining and knurling on the flashlight. There was only 1 thing that didn't go so well, and that was the O-ring. Somehow it got damaged while unscrewing the body and putting it back on.

With this package, I also received a white diffuser. Interestingly enough, it doesn't fit the ROT66 gen2. Mistake? The holster doesn't seem to be made of high quality and is just a nice extra accessory. Very basic. The lanyard seems to be okay.

One thing they improved on is the tailcap. Instead of the extremely lightweight tailcap on the 1st generation, they now have an optional stainless steel endcap. And it's rather heavy compared to the original tailcap,  45grams (0.55oz) vs the original 15.4 gr (1.58oz). 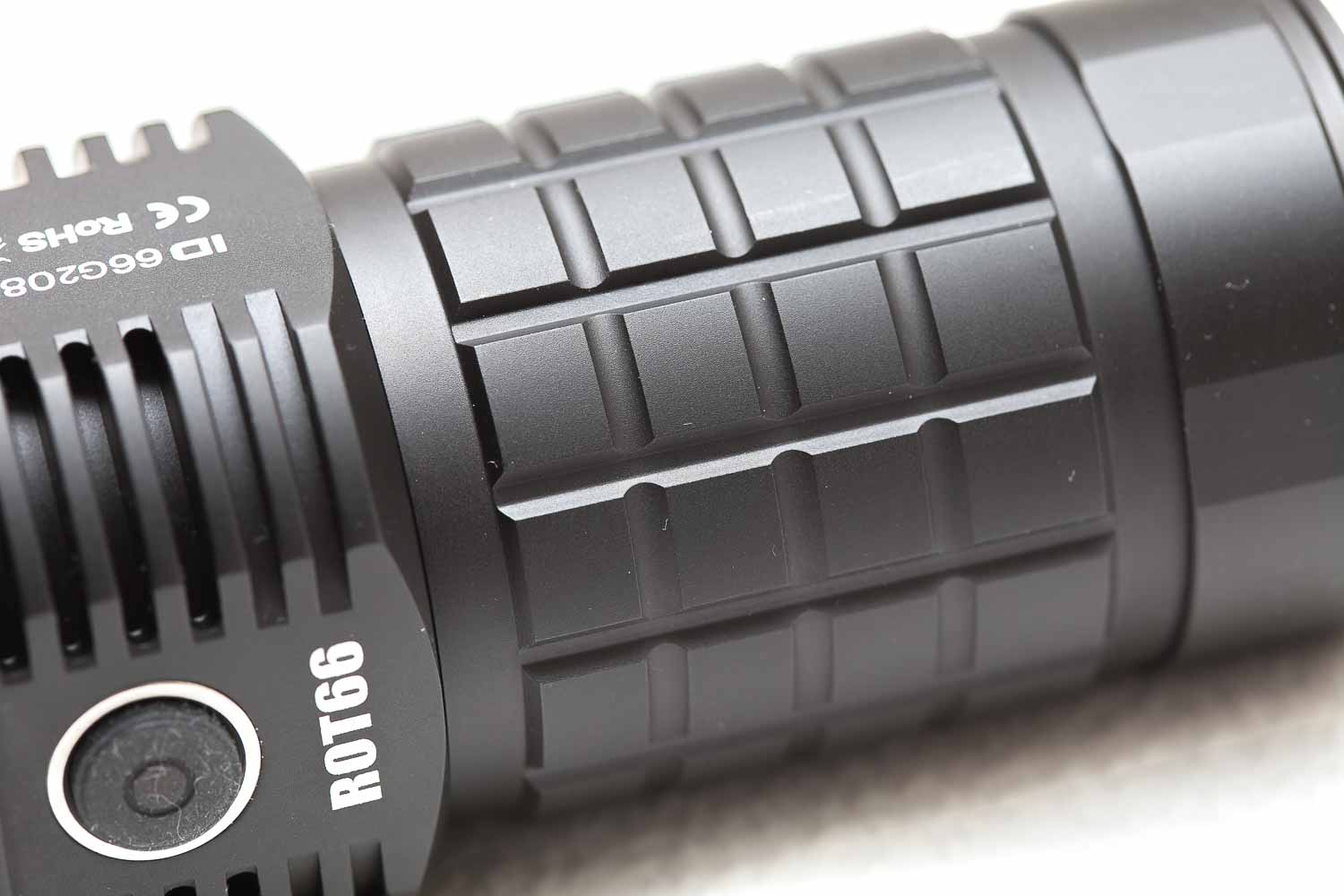 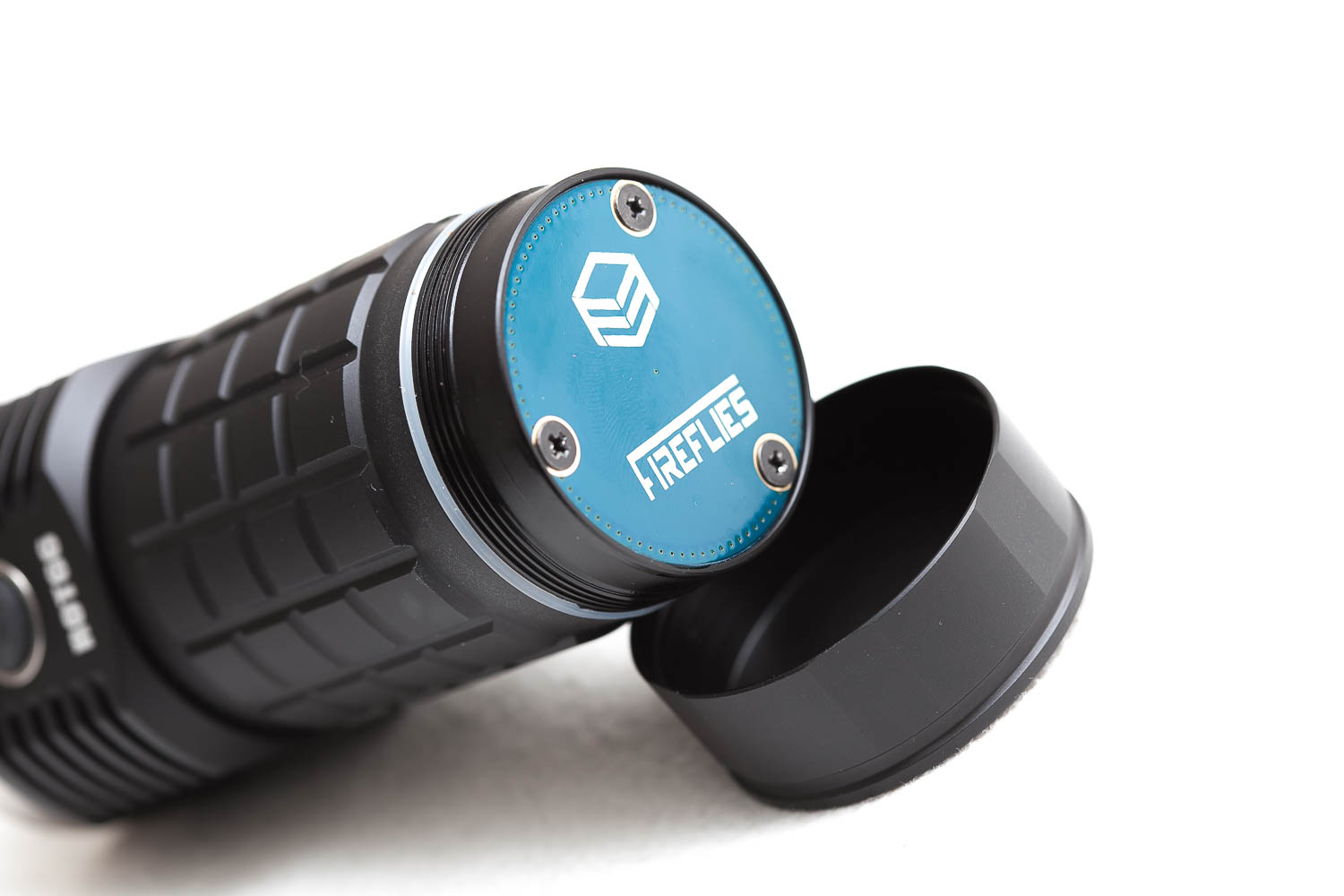 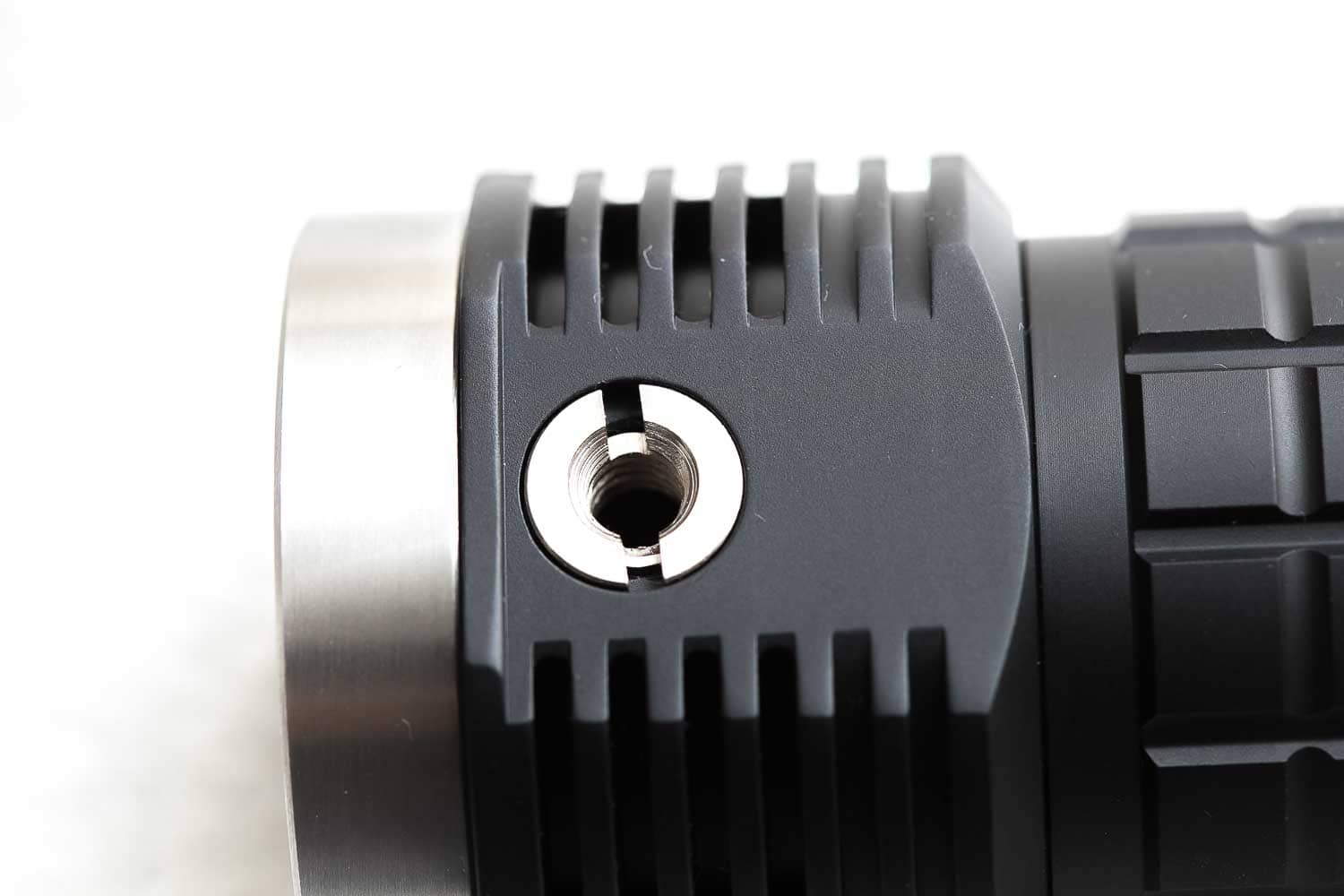 Compared to the 1st generation 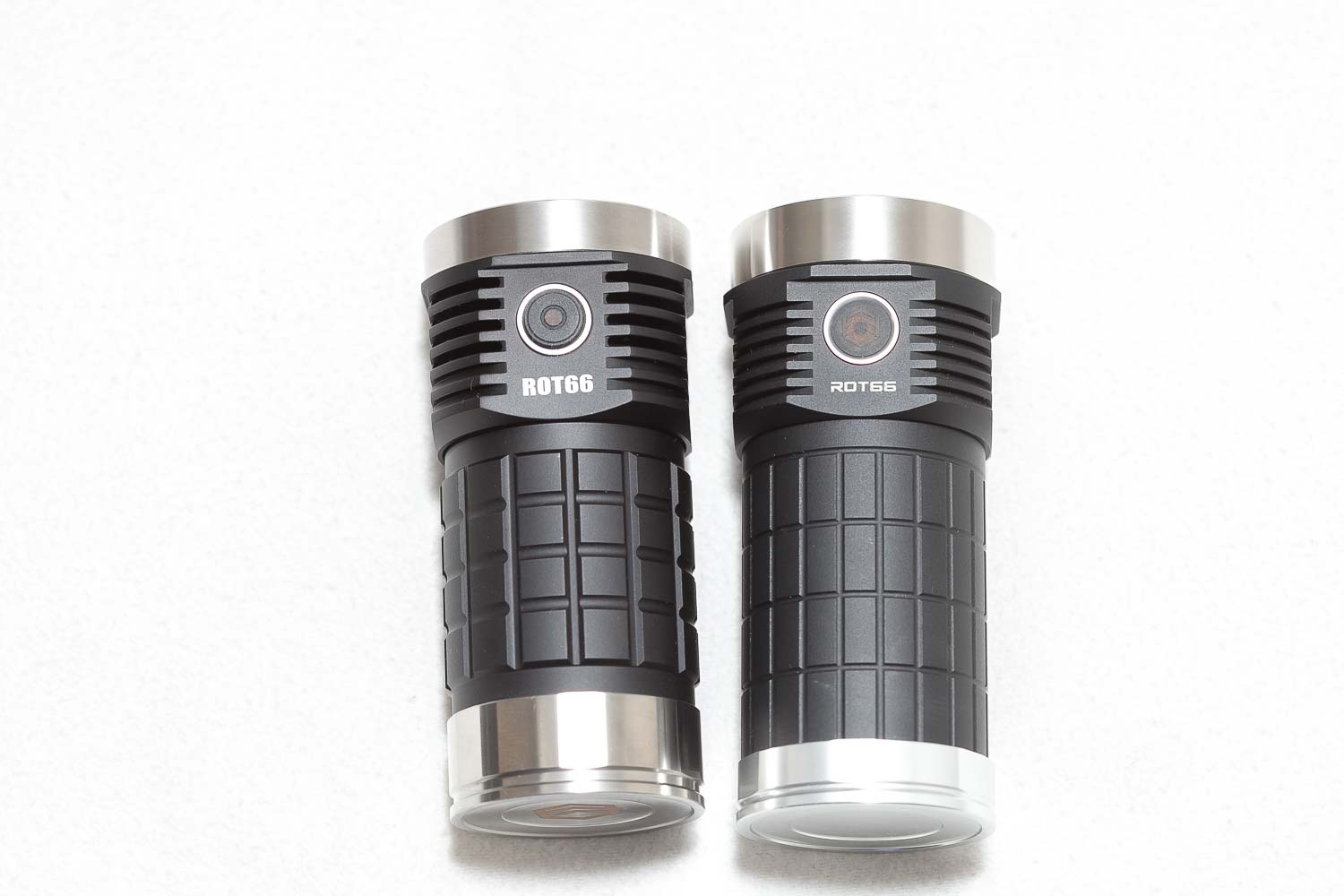 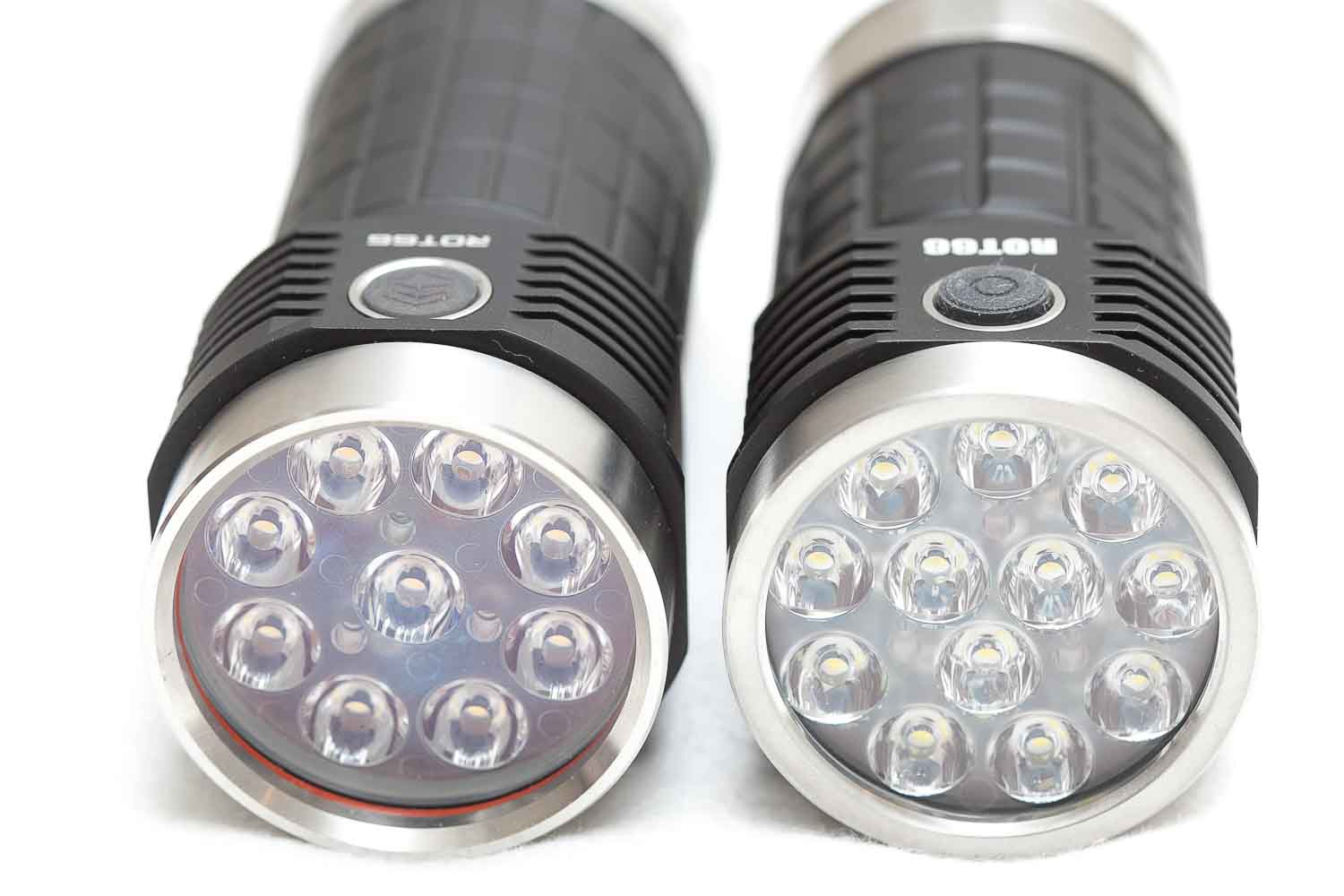 I received the Fireflies ROT66 gen2 with 12*XPL-Hi LEDs for maximum brightness and neutral color. My first generation ROT66 has Nichia LEDs which are completely different. It has less LEDs and a different color temperature.Therefore most comparisons will fail. The Nichia's will have a higher CRI, while the Cree XPL have higher output. Mines are 5000K, which is a sweet spot. Not too warm, nor too cool. Since these are XPL Hi's they don't have a dome and should increase throw even more, unless you use the additional 45 degrees TIR optics.

You can choose from the following emitters:

The bezel is stainless steel, just like with its predecessor. The Tailcap, however, is replaced with a normal black aluminum tailcap and stainless steel as an optional attachment.

You'll get a second TIR optic within the package. This is not a spare but a replacement. Meaning that the original TIR optics have a 15 degrees angle of light (more throw) and the additional TIR optics are 45 degrees and therefore more floody. I really like that Fireflies added them as part of the kit! Well done FireFlies!

Aux LEDs
These are the colorful LEDs on the LED board for improved appearance but are also functional. They change colors relative to the Voltage of the batteries. You can however also turn them off if you'd like, or dim them.

How to turn off the secondary, AUX Leds on the Fireflies ROT66 gen2 and other Anduril flashlights? 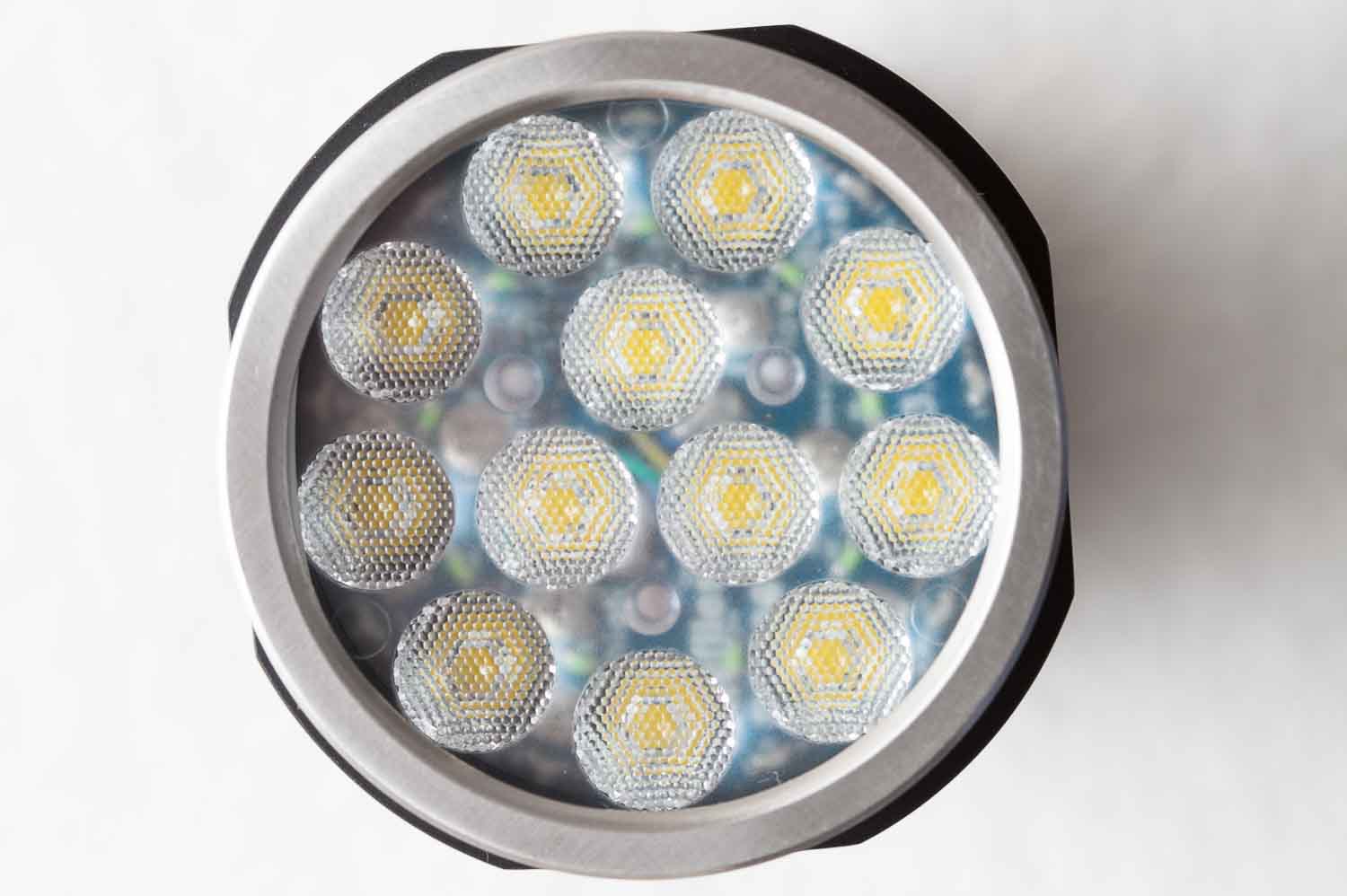 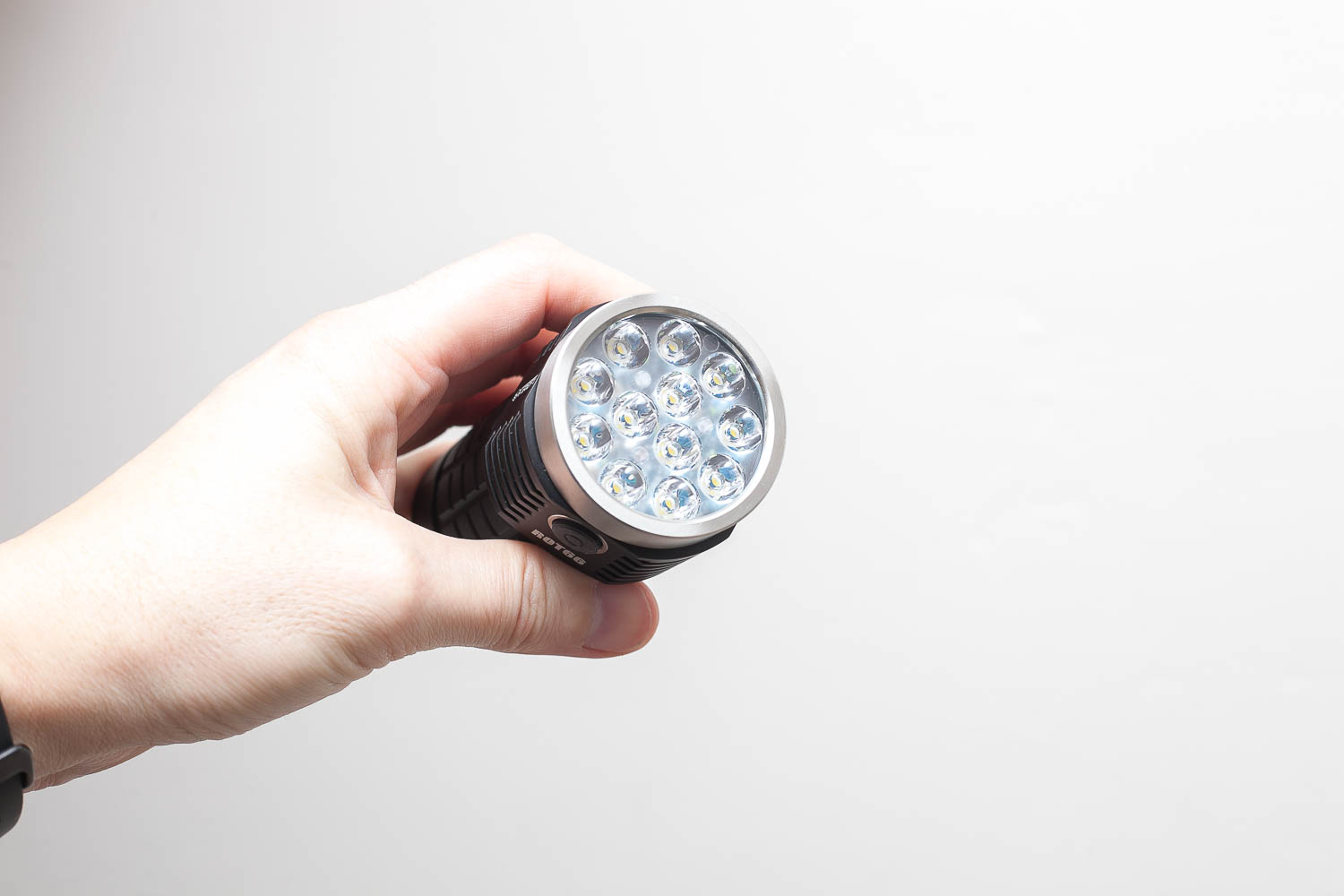 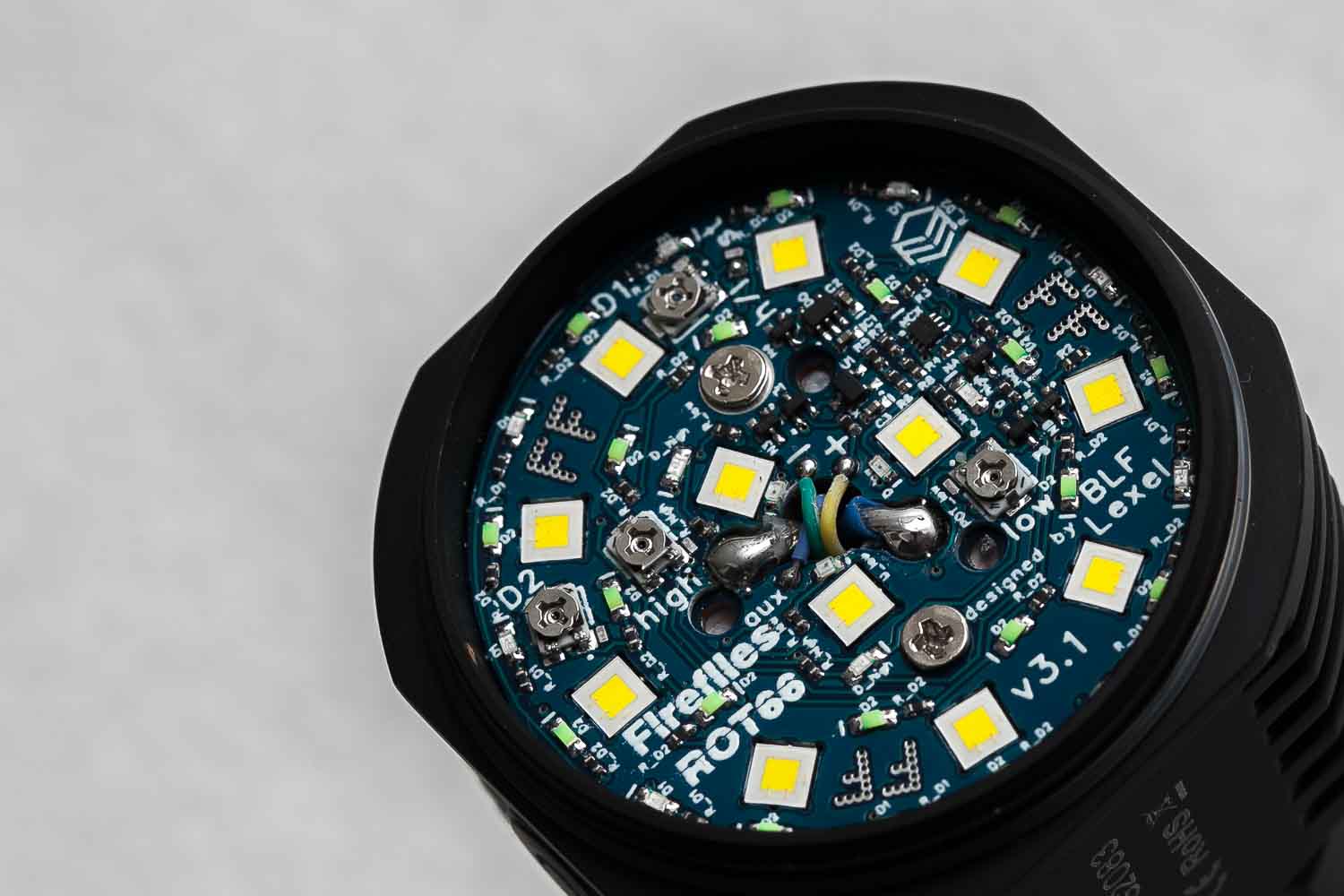 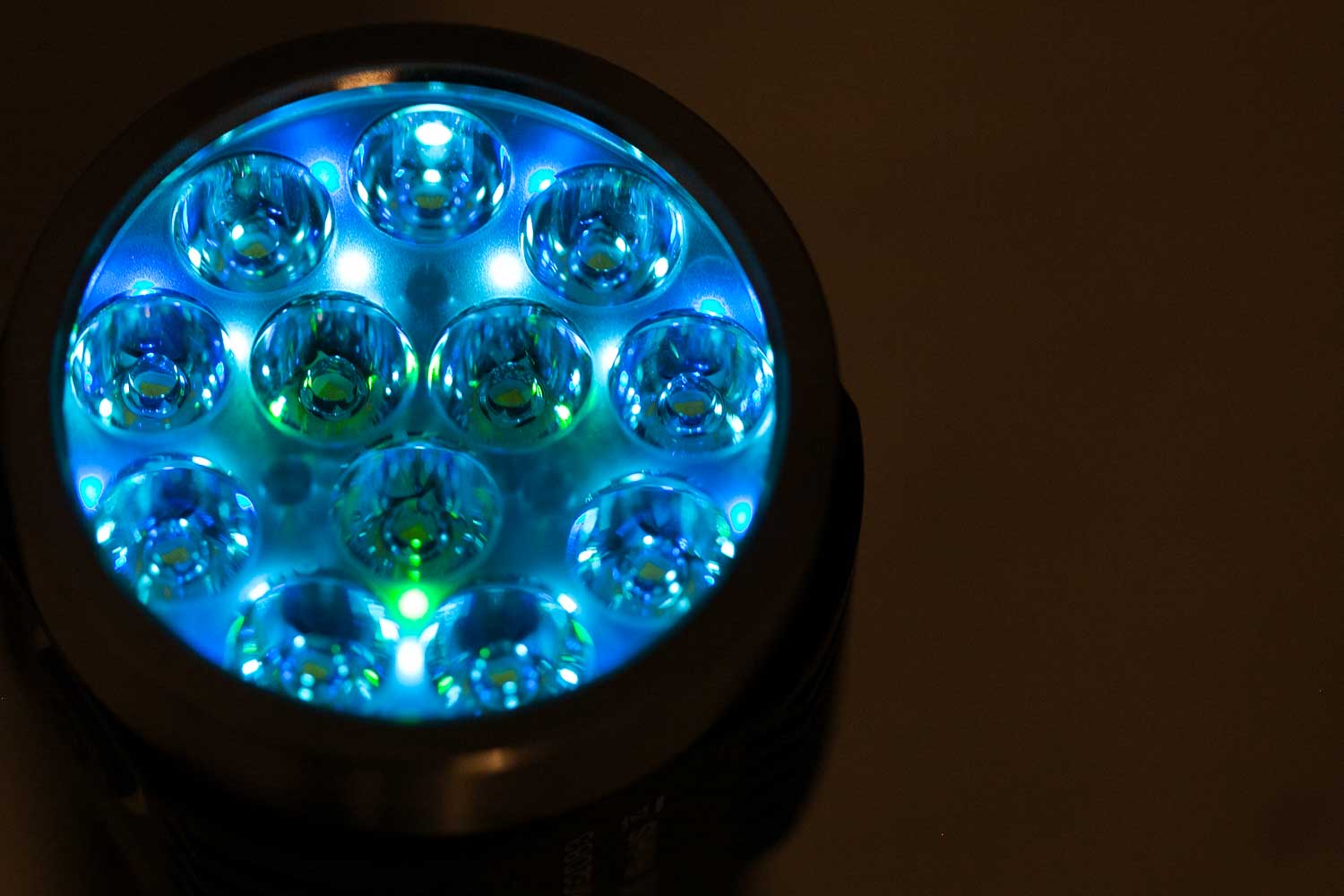 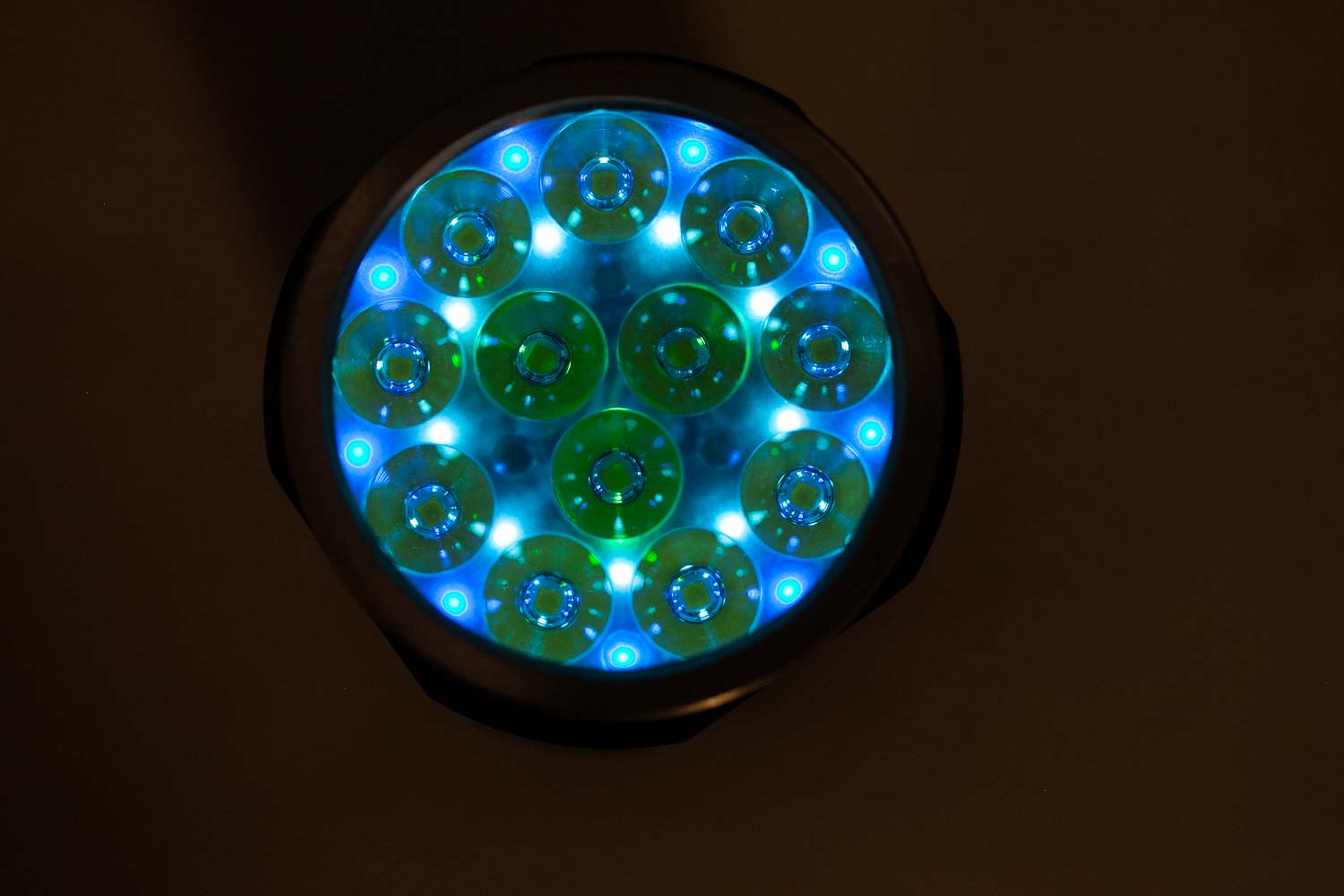 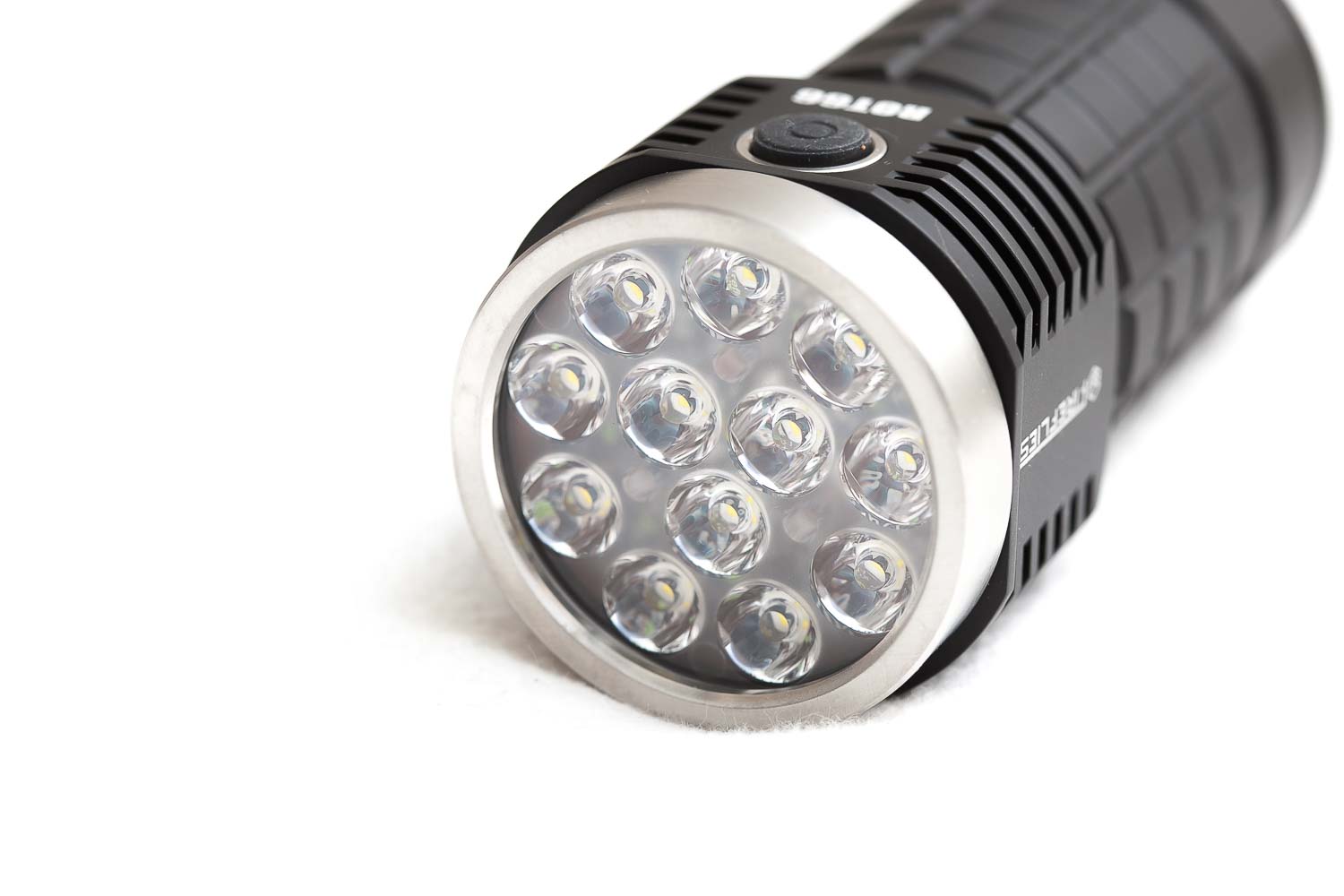 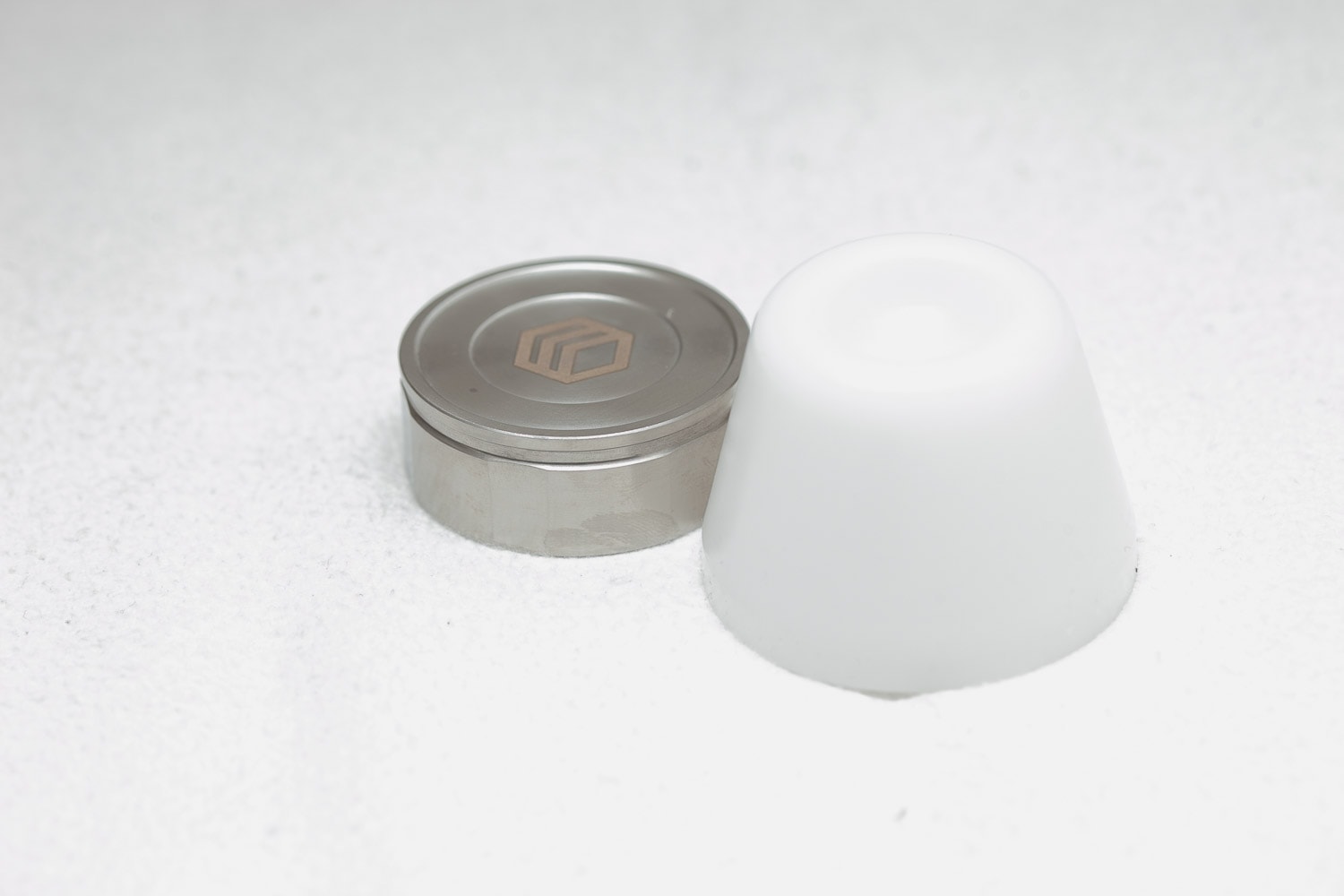 The second picture shows the 1st generation next to this light. 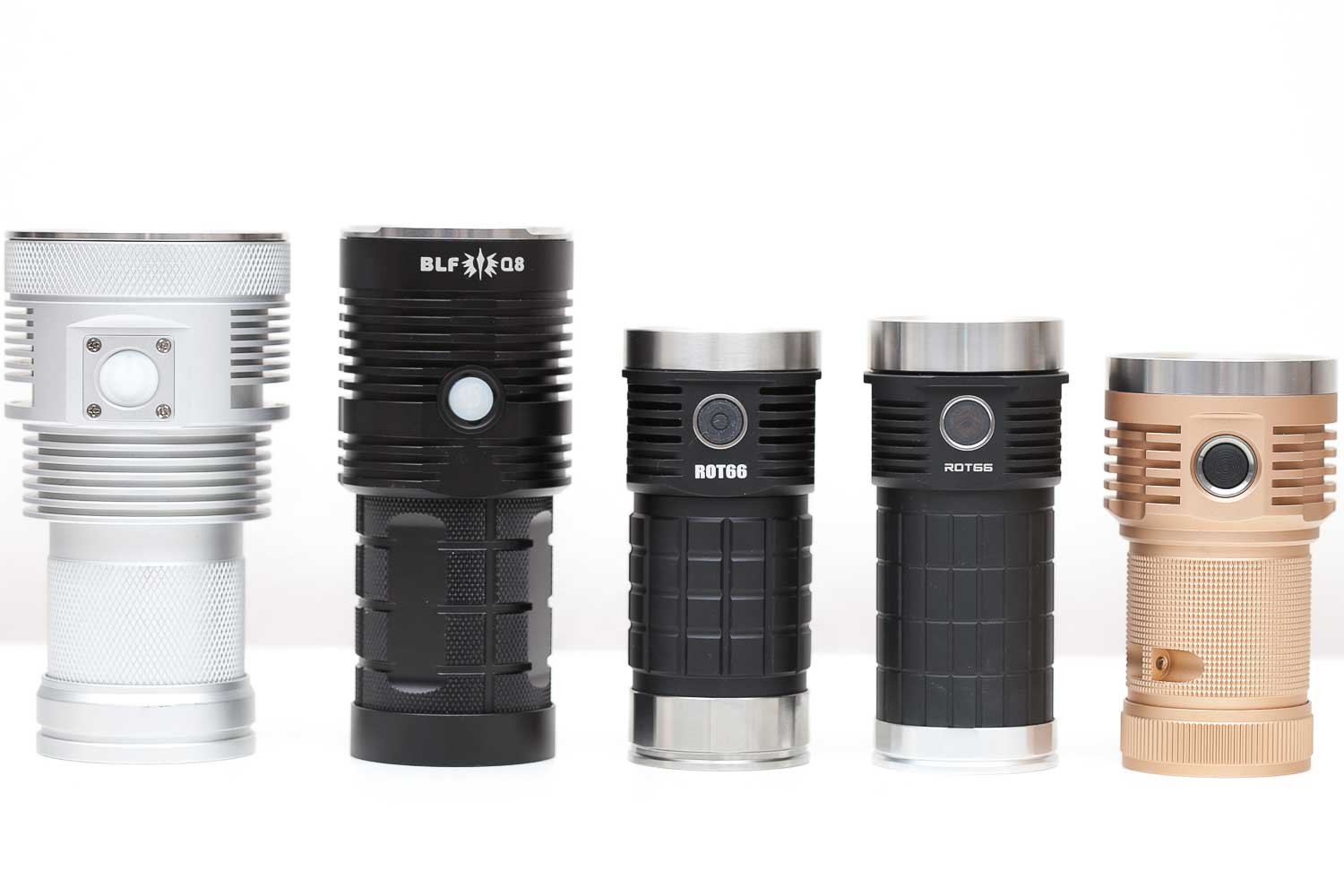 The Fireflies ROT66 gen 2 uses a firmware called Anduril. A Budgetlightforum member named Toykeeper wrote the code for the firmware.

By default, the ROT66 II uses a smooth ramping mode.

Keep in mind that the AUX LEDs are always on by default.

Enter Special/Fun modes from OFF:

Read the full manual on how to access and customize these modes. Also, see the firmware picture.

The ROT66 II has a low-voltage-protection (LVP) and thermal regulation.

LVP makes the light step down to a lower level when the battery is low, and if the light is already at the lowest level, it shuts itself off. This activates at 2.8V. LVP adjustments happen suddenly, in large steps.

Thermal regulation attempts to keep the light from overheating, and otherwise adjusts output to stay as close as possible to the user-configured temperature limit. Thermal adjustments happen gradually, in steps so small they are difficult for humans to perceive.

They got rid of the battery carrier design. Especially for this kind of light, a battery carrier was a little over top. It needs 3 high Amp batteries for it to reach maximum output. Although most multi-cell flashlights use 4 cells, the ROT66 uses only 3. This could be a pro or a con. At least the diameter of the flashlight could be a few millimeters less. 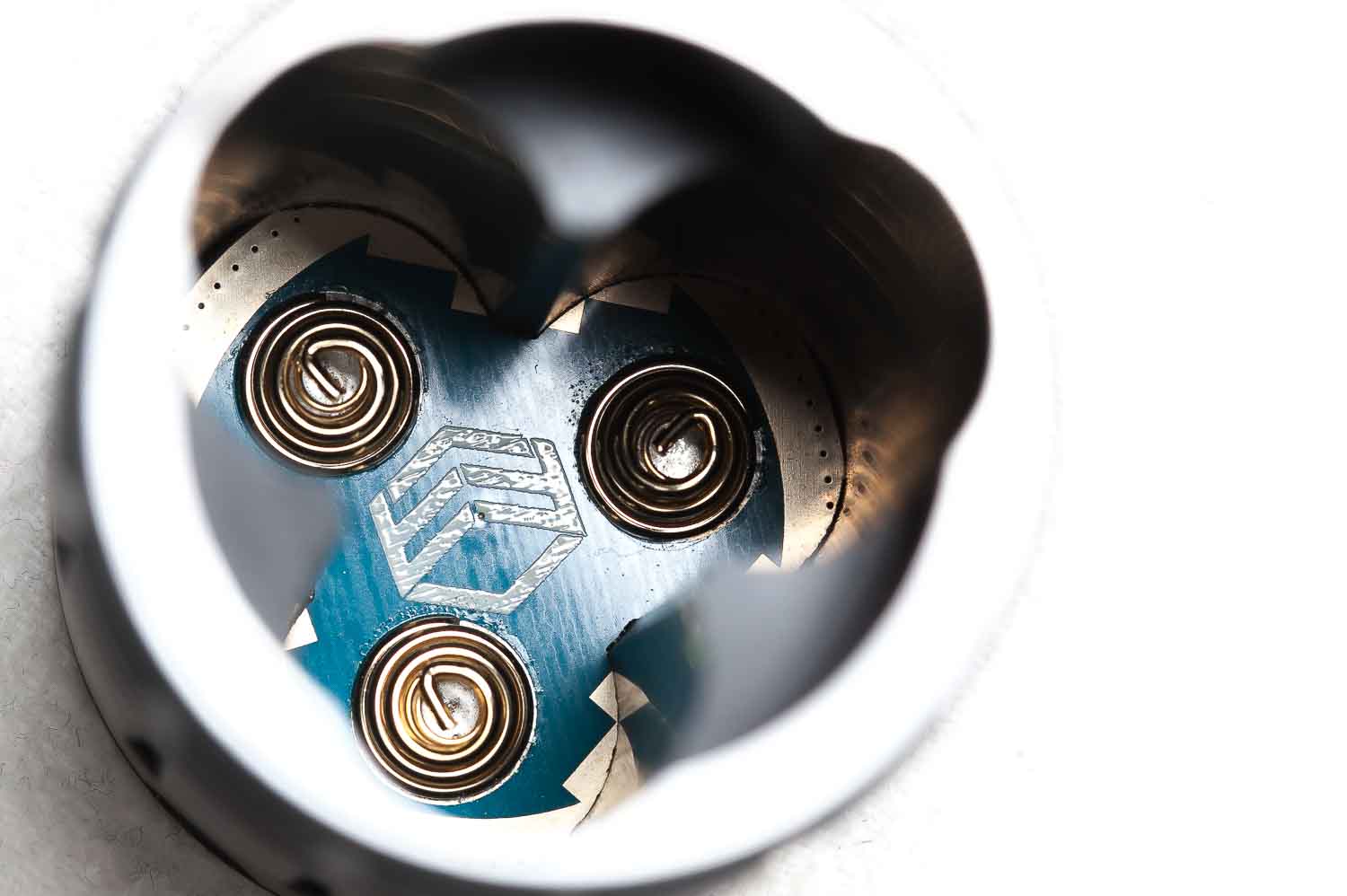 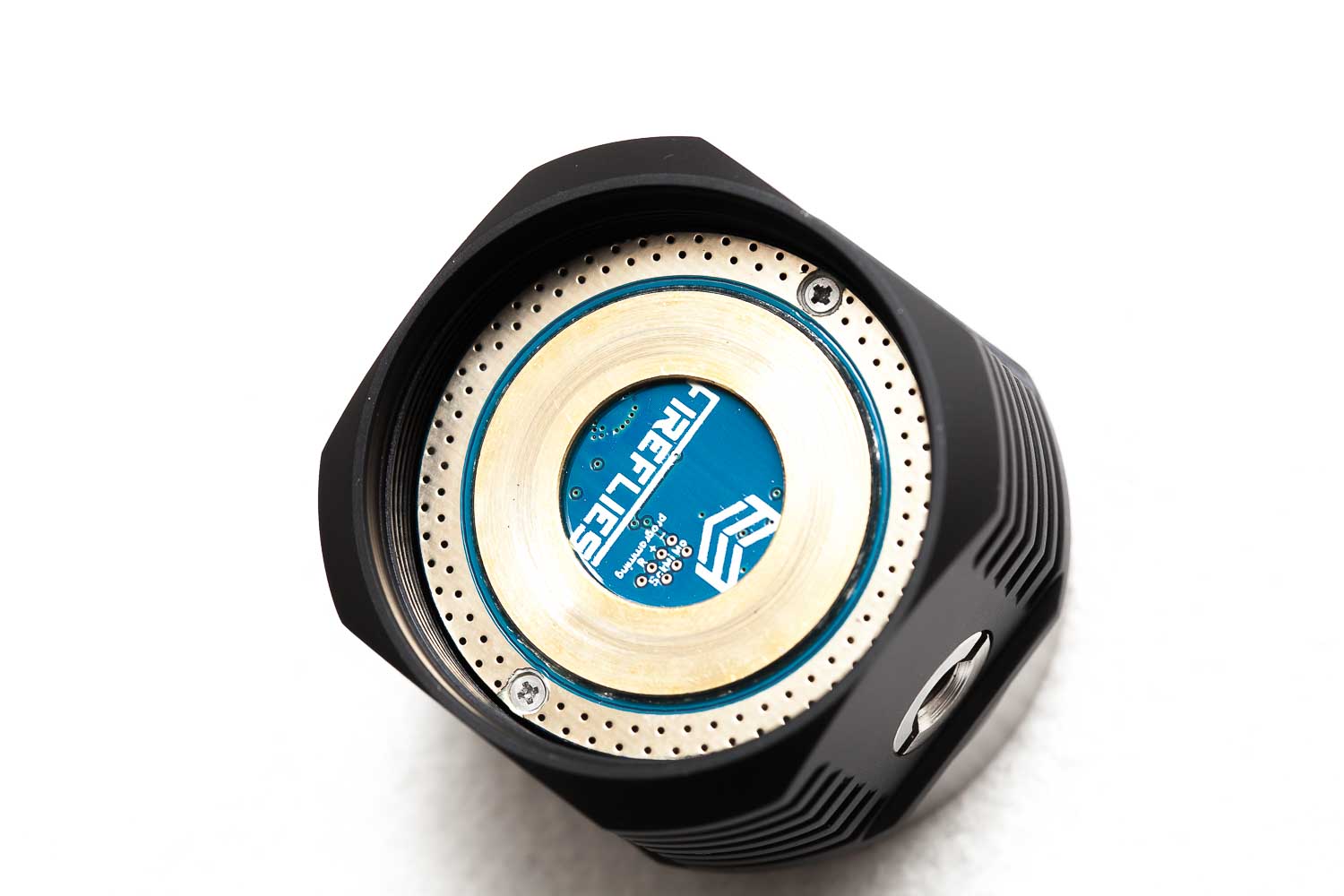 I took all of my readings from fully-charged Sony VCT5A batteries.

All output numbers are relative to my home-made Integrating Sphere and which is set up with a Hagner E4-X professional Lux Meter for measurements. For bright flashlights (above 5000 lumens) I am adding a Kenko PRO1D ND-16 filter. The base measurement was done with a Convoy S2+ that was tested at 137 lumens.

According to the FireFlies website, it is supposed to reach 12,000 lumens. I was unable to reach that, but at almost 9,000 lumens it's definitely a pocket rocket. It is about 1000 lumens brighter than the gen1 with Nichia LEDs. 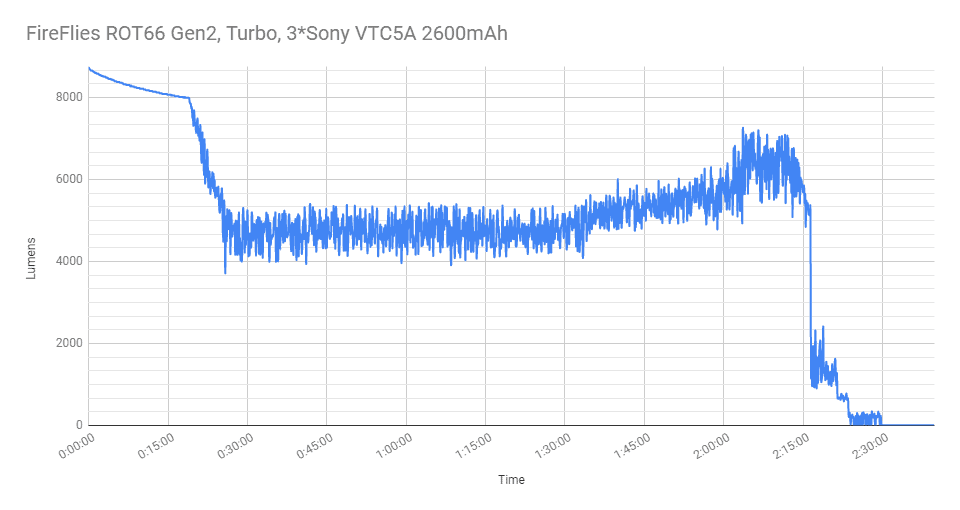 The first 18 minutes or so are very stable, but then it becomes unstable. The great amount of ups and downs are due to the meter jumping around. My other meter is very stable, but somehow the Extech HD450 just doesn't like to keep things stable. But at least you can see that the average output actually increases towards the end before dropping down at 2 hours and 15 minutes. That brings the total runtime to 2 hours and 15 minutes IMHO.
The output that is shown in the runtime graph could be due to the temperature setting. See the overview with the UI how to set the Temp.

Using turbo mode, I get a maximum of:

I must admint that the Emisar D18 was only using 2 batteries, since I was in a littly hurry. But they were high Amp batteries, so the difference shouldn't be too different from using 4 batteries. 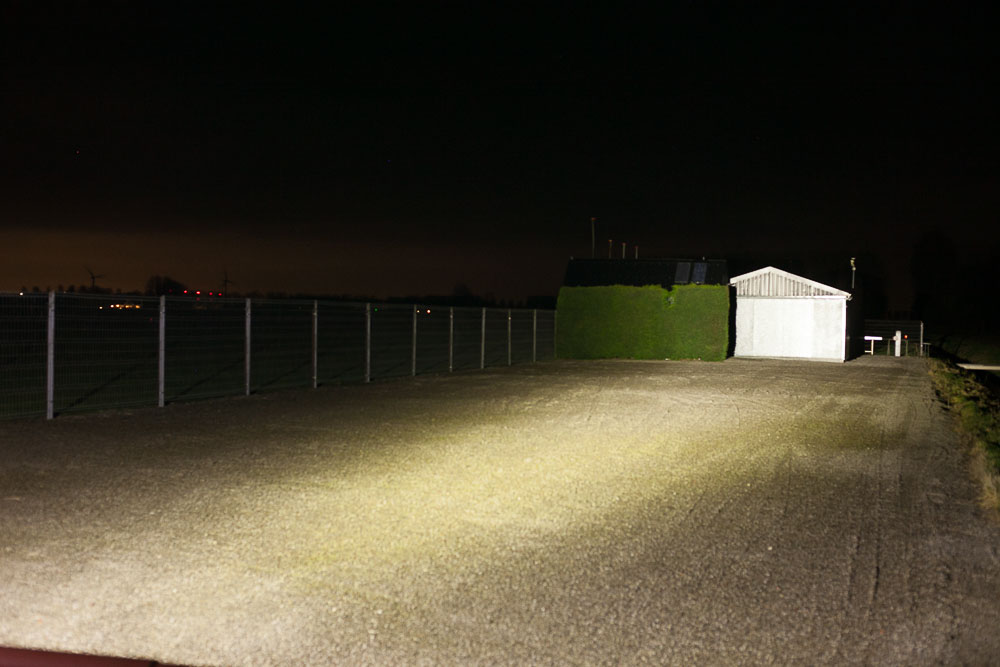 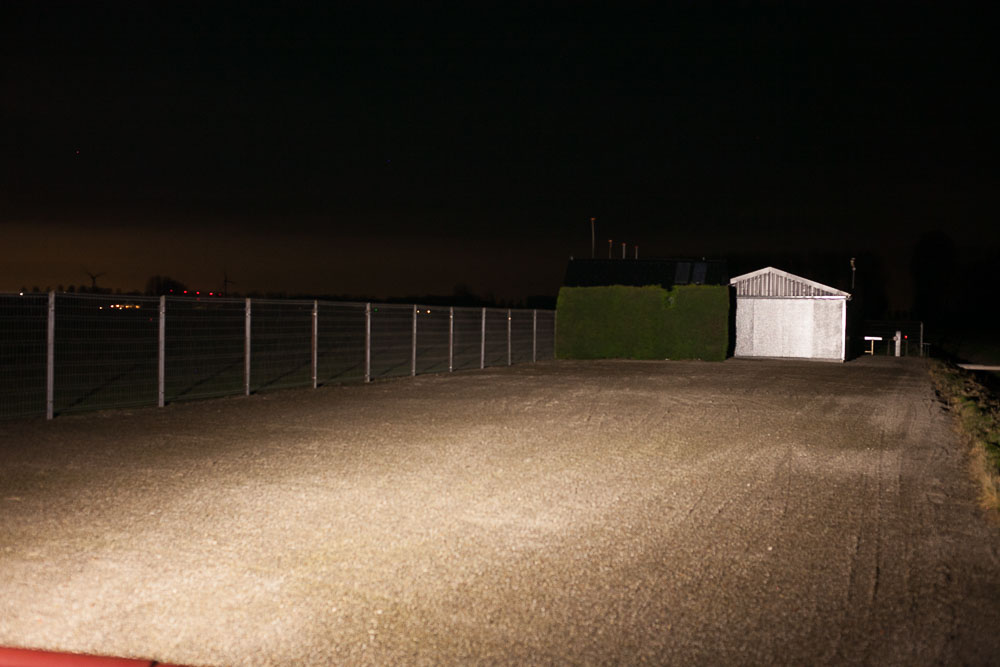 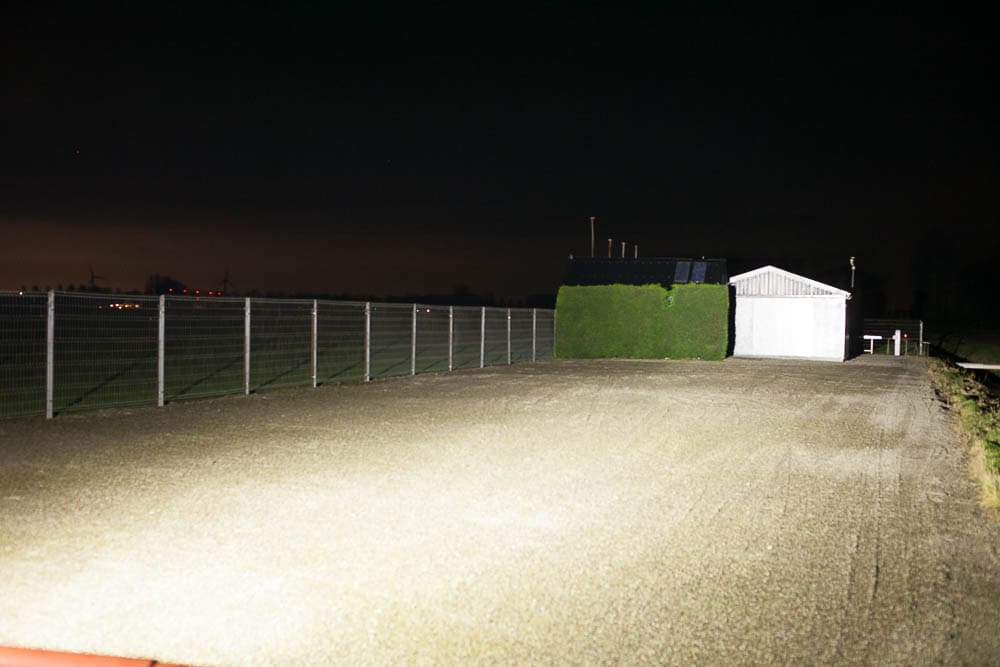 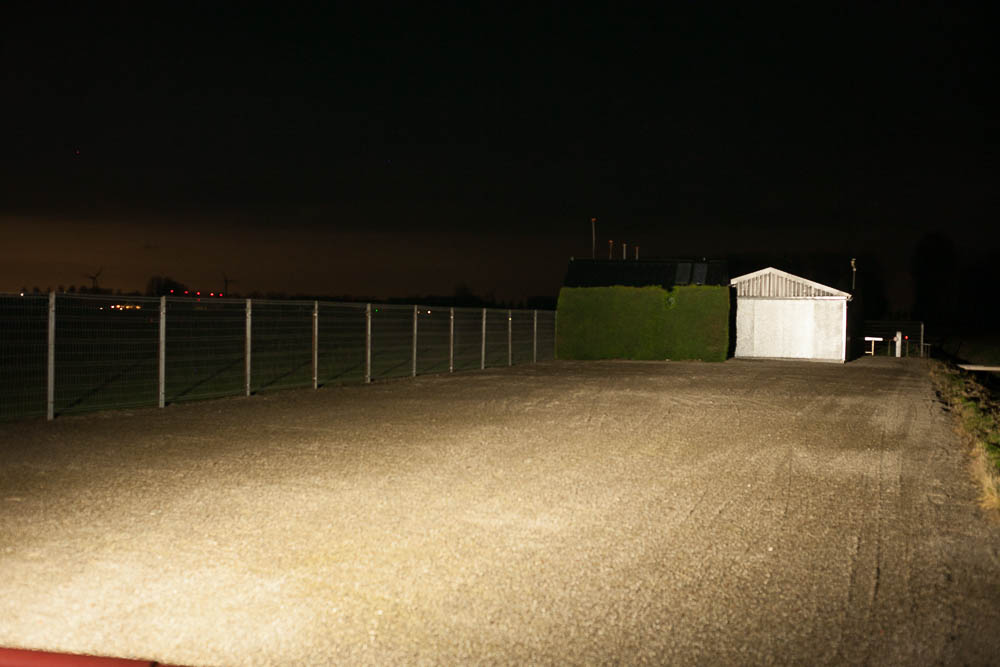 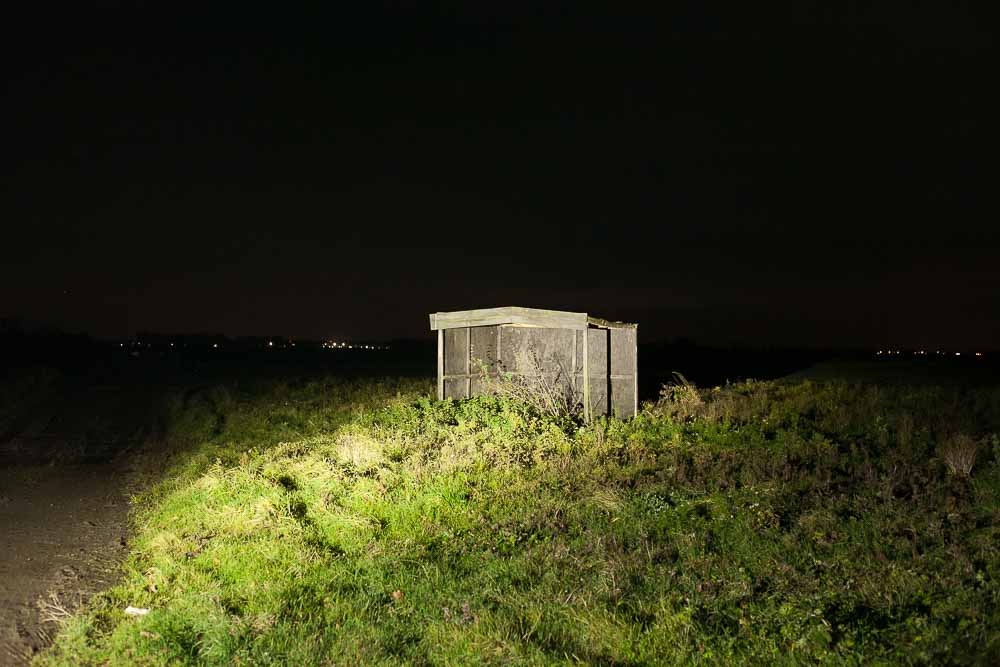 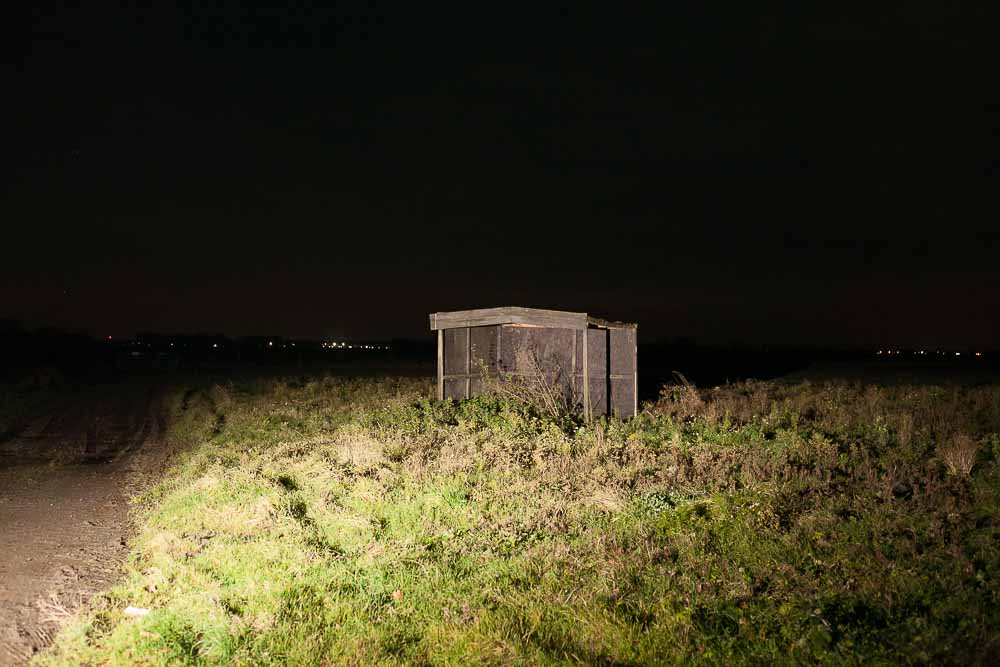 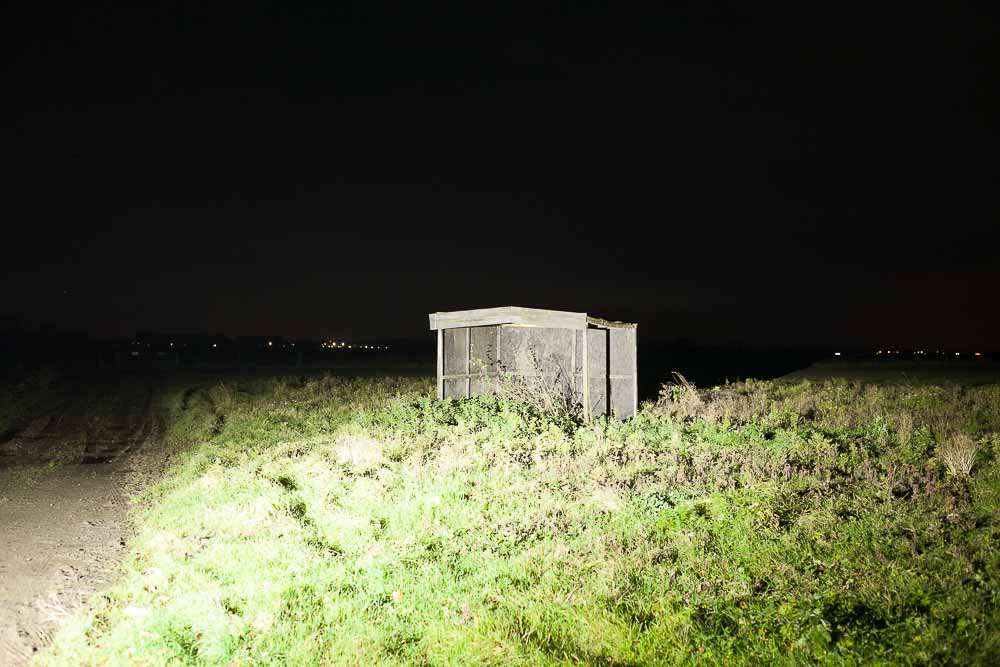 If you are looking for a very bright, but yet pocketable flashlight with great runtime? Have a look at the ROT66 gen 2. It's not a lot brighter than the generation 1, but it is an improvement over the gen1. It's a little shorter, no battery carrier, more LEDs, and AUX secondary LEDs. The only thing is that it uses 3 batteries instead of the regular 4. For the rest a great performer!