This thing is beautiful. I can't stop saying it. And can't stop playing with it.

My first impressions were very positive. It doesn't only look good, it also feels very well in hand. No sharp edges or anything. A great Tactical flashlight in my opinion.

The reason for reviewing this flashilght is because of the MCR. MCR stands for Magnetic Control Ring. This is a common feature on Sunwayman flashlight I have reviewed here as well like the Sunwayman V11R.

Don't want to read the full review? Jump to the conclusion.

What's inside the box:

These things are quite normal for a flashlight to be included, so nothing noteworthy. But it is still better than some other flashlight manufacturers who don't put any extra o-rings, a lanyard or rubber boots. 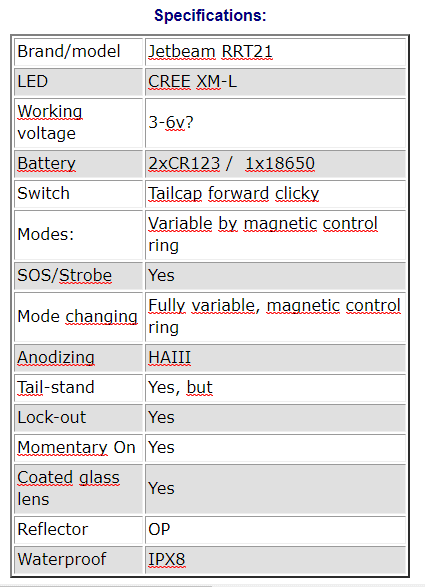 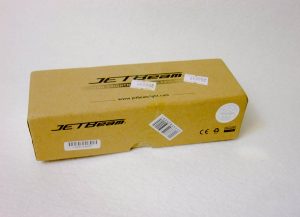 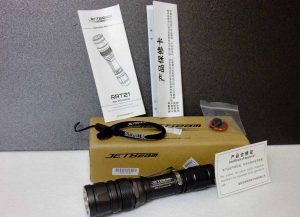 Anodizing and handling of the light

Jetbeam put quite some effort in shaping this litte beauty. There is no sharp edge or blemish to be found on its anodizing.

I have had quite a few lights, both in the budget segment as well as in the premium segment. This has been the nicest looking light I have had.  And I have had probably more than 50 flashlights. This one is "king of the hill".

Its nicer that any premium Sunwayman, Fenix, Nitcore or Eagletec. And way above any ultrafire/crapfire/housonfire light I have ever had or seen..

The RRT21 is super smooth, and can be classified as a real shelf queen.
Unfortuately that silk as smooth RRT21 has some downsides it`s grip.
There is almost no knurling on this flashlight. Except for the MCR.
Fortunately the belt clip can help to get some grip.

The lens is UV coated, and hardened according to the included manual.

The Jetbeam has an OP reflector, and a XM-L LED. This is not a long thrower.

The bezel of the RRT21 can be unscrewed with the Xeno Tw02 diffuser.
Unfortunately the diffuser can't be used as a diffuser on the Jetbeam. 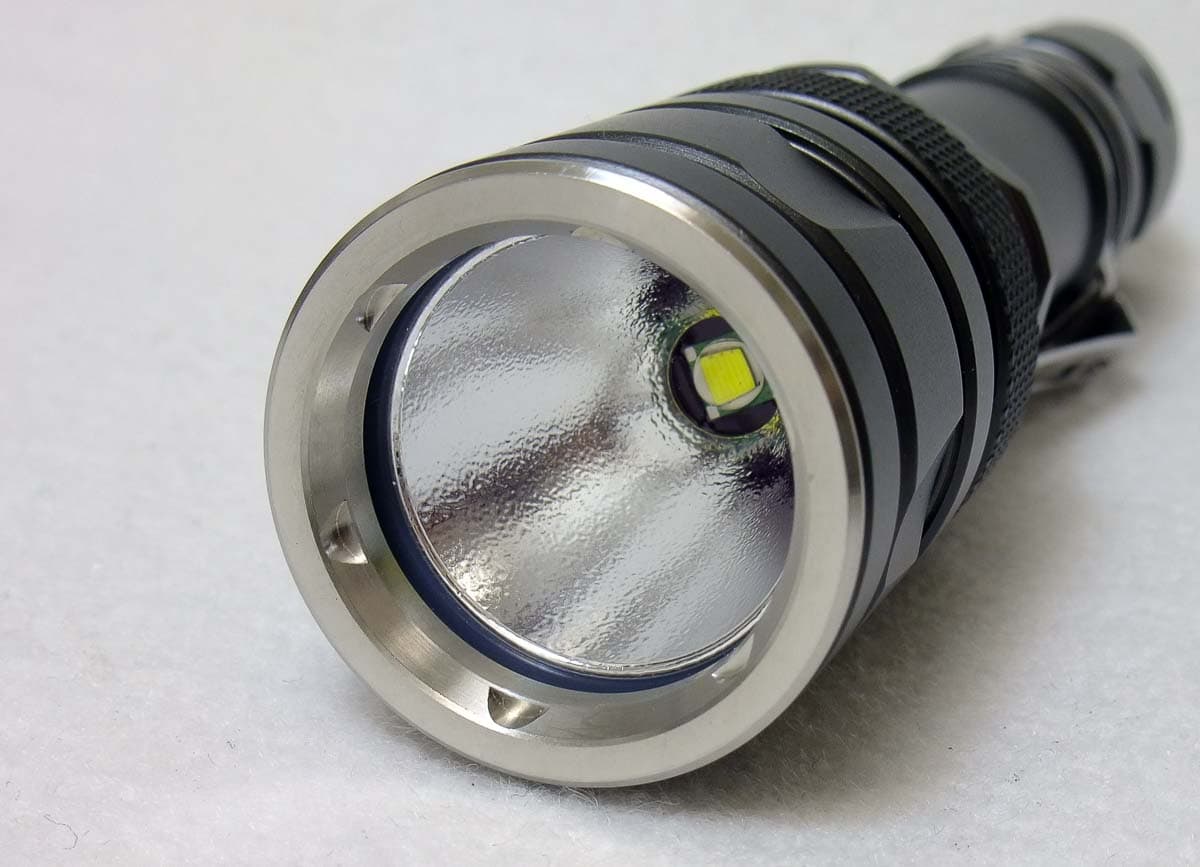 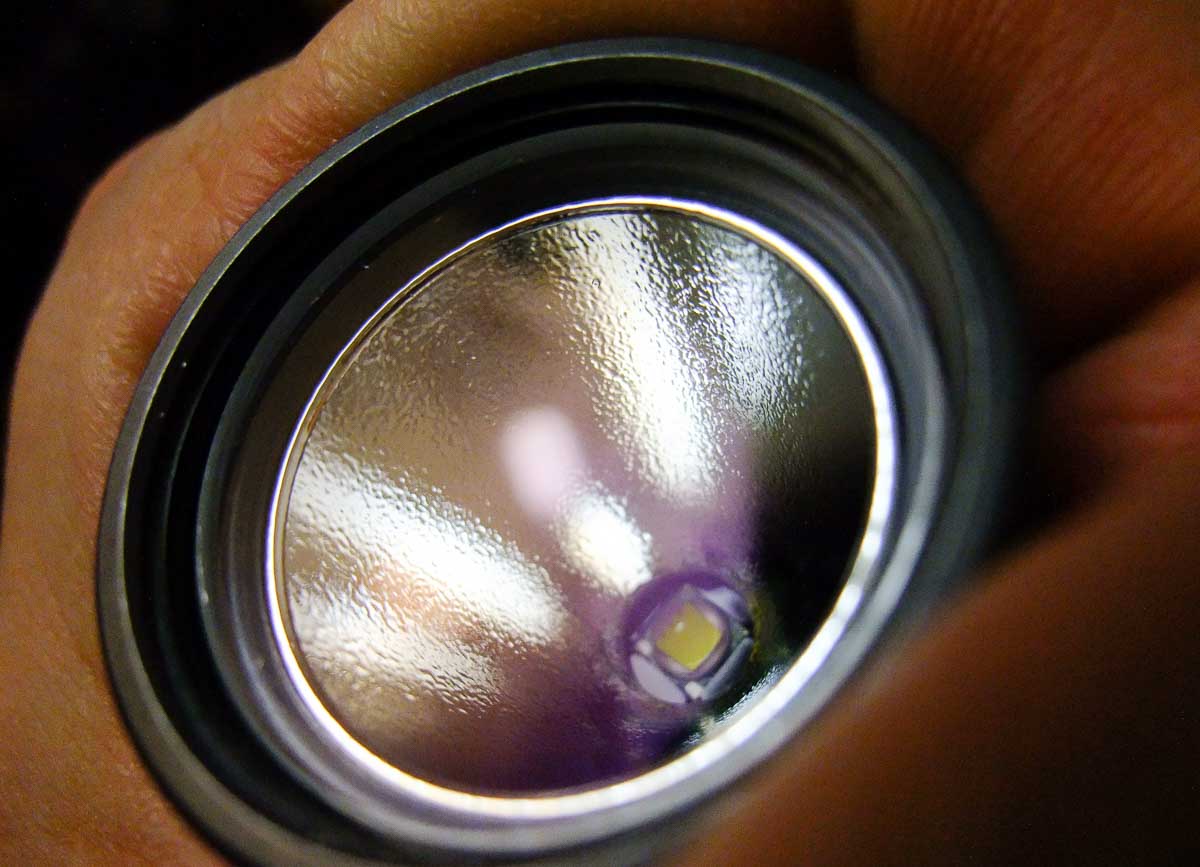 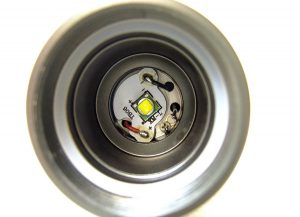 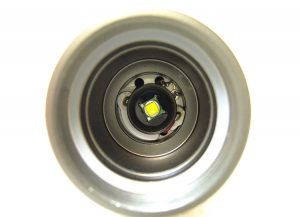 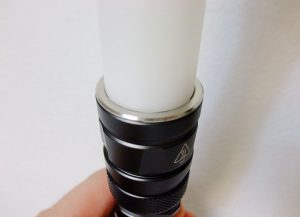 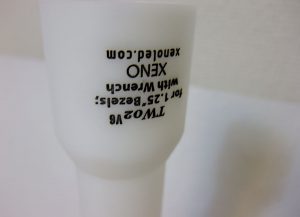 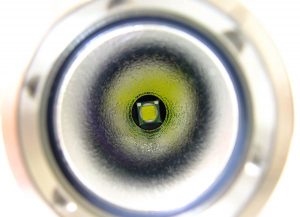 All the threads on the light were lubed when I received it. All threads are anodized so you could twist the body for a Lock Out. 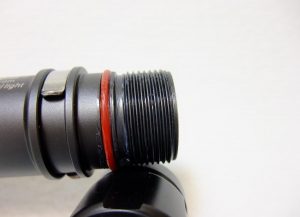 The RRT21 can tailstand, but is not stable doing so. This is not recommended.  Prints on the jebeam are done well. Nothing to complain about.

Because of the MCR this thing is fully variable!
Which means it can incres the output from 3 to 450 lumens in a smooth increase.
This was one reason for trying the Jetbeam RRT21.. Because I love my Sunwayman MCR lights.

This is how it works?

Notice: 1 downside of the Standby position is its high current draw
I measured about 0.2A in the Standby position.. that`s really too much for a flashlight in standby mode.
Therefore I advise to use the tail-cap switch or a lock-out to turn off the light.

Sunwayman V11R and V20C start off at a much lower output than the RRT21, which is a shame for the RRT21 imho.

The RRT21 starts at 3/5 lumens, which can be too bright. And it increases output quite rapidly.

Sunwayman MCR lights have a smoother transition from Min to Max, although still not perfect.

Tip! You can however decrese the output after moving the dial from Stand-by to low by slowly turning the ring counter clock wise again in the direction of the Standby.. this will decrese it a little bit.

The control ring moves in a 140 degrees circle from Off to High. I measured this by putting the light facing down on a piece of paper with a 360 degrees picture.
The measured output in % when turning the control ring.
From the point I started turning the dial, the light turned on at about 15 degrees.

Unfortunately the graph show some output between 10 and 15, but that is only because of the software, it automatically drew a line from 0 to the next level.

Check the graph to see that between there is a fast increase of brightness when the dial is turned only 20 degrees.
This isn`t 100% the way it increases, because the light slightly turned sometimes during the test.. 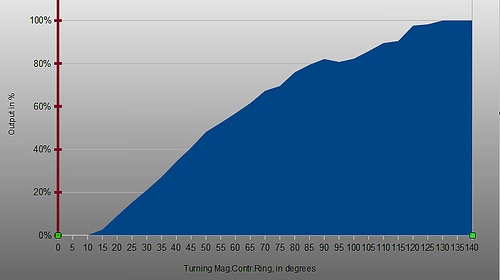 Nope, nothing to see.

It's tested with a fully charged NCR18650B battery.

In the Highest output mode it started off at a measly 1.3Amps..
The PRO is that you can get a long runtime in max! If you are looking for a flashlight that drop jaws, you should look at the overview of currently available brightest flashlights. Or check out the other 18650 flashlight reviews.

The following graph has been taken in a time span of a mere 3 hours.

This light is not current regulate .and it will decrease output bit by bit.
This will help running the light longer at the expense of brightness.
Your eyes will not notice this decreasing output until it has become very weak.. Reminds of the old maglite times. 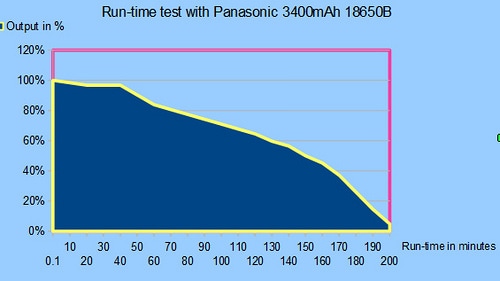 After 3 hours, it is at about 20%. This is roughly 100 lumens. Bright enough for indoor stuff.

The runtime was aborted at 10% output. The panasonic went down to 2.8V. I didnt stay the full 3 hours with the light, so between 40 and 60 minutes I didnt record the output! 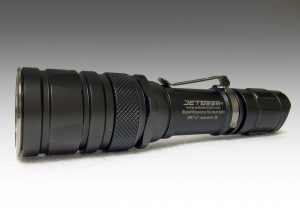 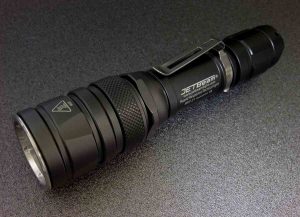 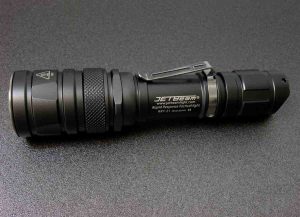 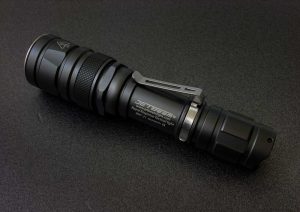 The beamshots are a comparison between the XinTd X3 with 3AA eneloops, the DQG 26650 3x XPG2 with a 26650 lithium battery, and the Sunwayman D40A with 4xAA eneloop PRO batteries. . 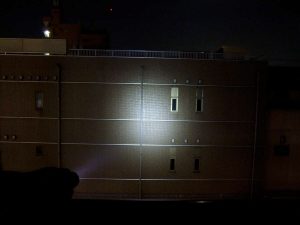 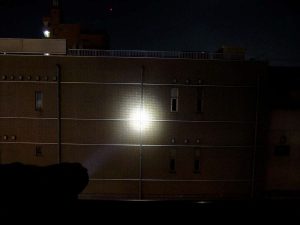 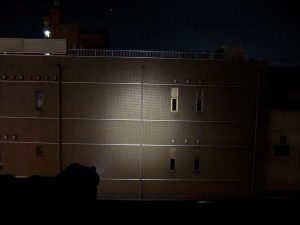 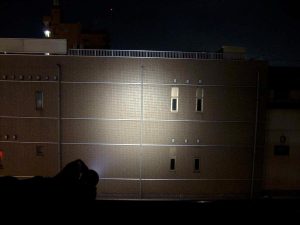 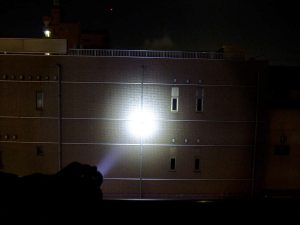 Not for sale anymore..