As a relatively new Chinese flashlight manufacturer, Amutorch has less experience in building lights than other companies. It doesn’t mean that they aren’t willing to experiment in terms of design however; they’ve made very interesting flashlights, such as the Amutoch AT40 with a titanium body and an aluminium head with an aspheric lens, or the Amutorch X9 with a triple SST-40 setup and USB type C charging, or even the Amutorch AX3, with a strange dual LED reflector setup.

Today, we will be looking at one of their newer lights, the Amutorch VG10 21700, an overall great light with with 21700 cell compatibility.

Starting with the packaging, the Amutorch VG10 21700 includes the light itself, a lanyard, along with 2 spare O-rings and a spare switch boot. One thing that would’ve been great to include would be a reverse switch tailcap, but that is just personal preference. One thing that should have been included would be an 18650 adapter.
As seen below, the light itself comes in a nice well packaged cardboard box. There’s also a manual included written in Mandarin, a language that I can’t understand at all, but it’s fairly easy to approximate the meanings with the runtimes and other miscellaneous specifications. 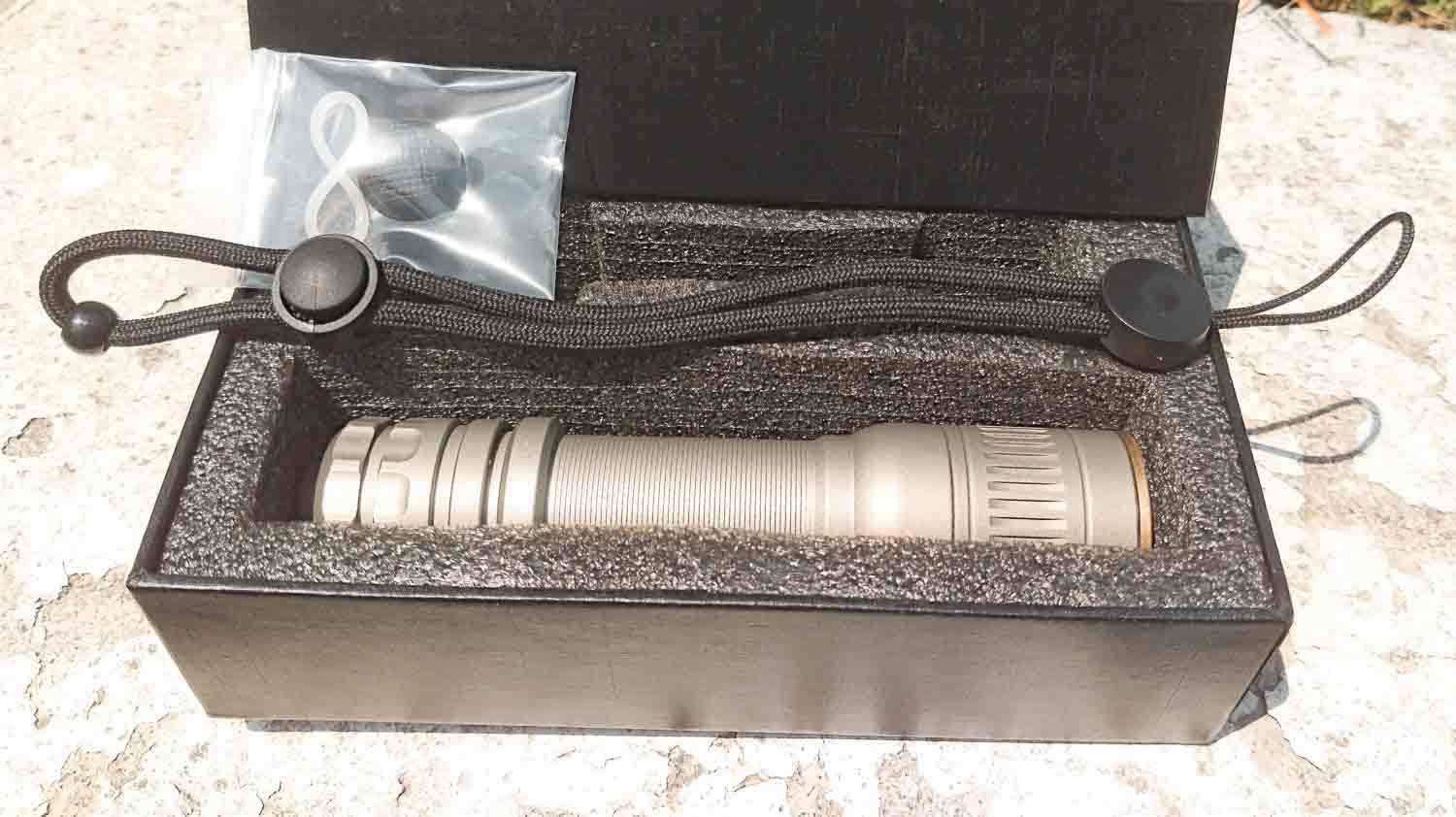 The light can easily be operated one handed, and the light body feels very well built. It includes an aluminium lanyard ring on the tailcap, which has a great fit and holds lanyards very well. It can easily be removed for a more uniform look. The included lanyard is rather high quality for one that’s included in the package, which is nice.

Due to the style of circular knurling, it easily adheres to the hand, and doesn’t feel slippery at all, which I appreciate.
Unfortunately, the tailcap prevents the light from tailstanding, which is a bummer for white wall light bouncing in case of emergencies. As for the switch itself, it uses a single physical forward switch for both power on and mode switching. It has a very nice feel to it, and actuation force for the switch is just about right. This is kind of typical for a tactical flashlights. Whether it belong in the list of most popular or most powerful tactical flashlights still needs to be seen.

The light’s build quality is great overall: threads for both the tailcap and head are square cut, and lightly lubed. They are quite durable, but are slightly gritty, so I would recommend reapplying silicone lubricant to prevent it being a problem. Would have preferred perfect threads, but these are still well made.

They are also anodized for optimal durability and the inclusion of mechanical lockout, which is not necessary with the forward switch. The head is also very well made, having a lot of mass and decent vertical finning to get rid of the heat. The reflector and lens are free of imperfections, which is always nice to see.

One thing that I’ve noticed though is that the battery tube itself is extremely thick, which didn’t seem to make sense with the type of knurling they are using. The light does have one flaw however: the anodization seems to have been done in a single pass, which results in a very pale, but visible, line in battery tube. Not a deal breaker, but something that could’ve been solved quite easily by doing 2 pass anodization.

Now we get to the much more interesting part: the internal build quality of the light. Earlier in the review, I mentioned that the battery tube was quite thick. It may seem unnecessary, until you see how the head is built. 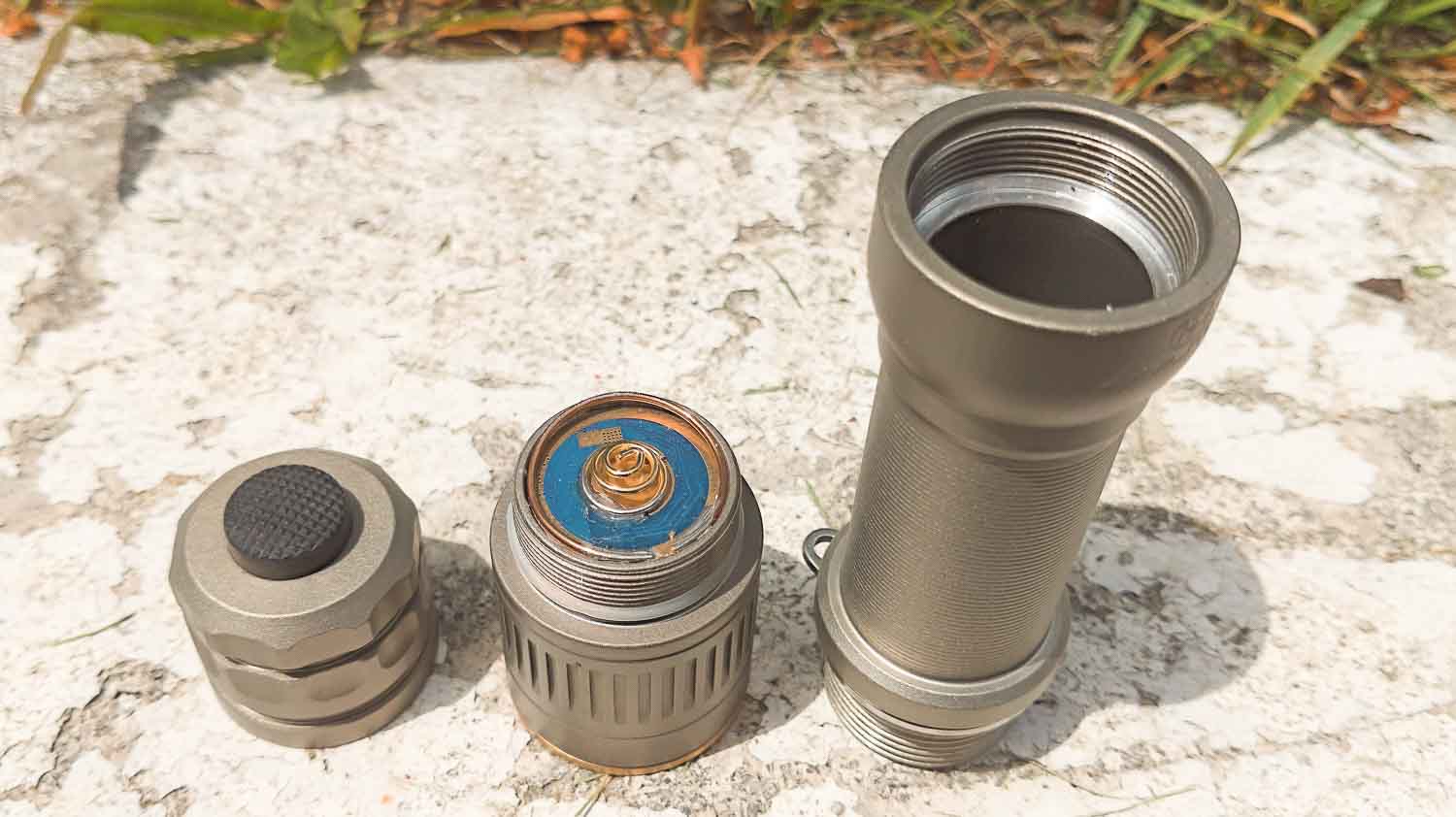 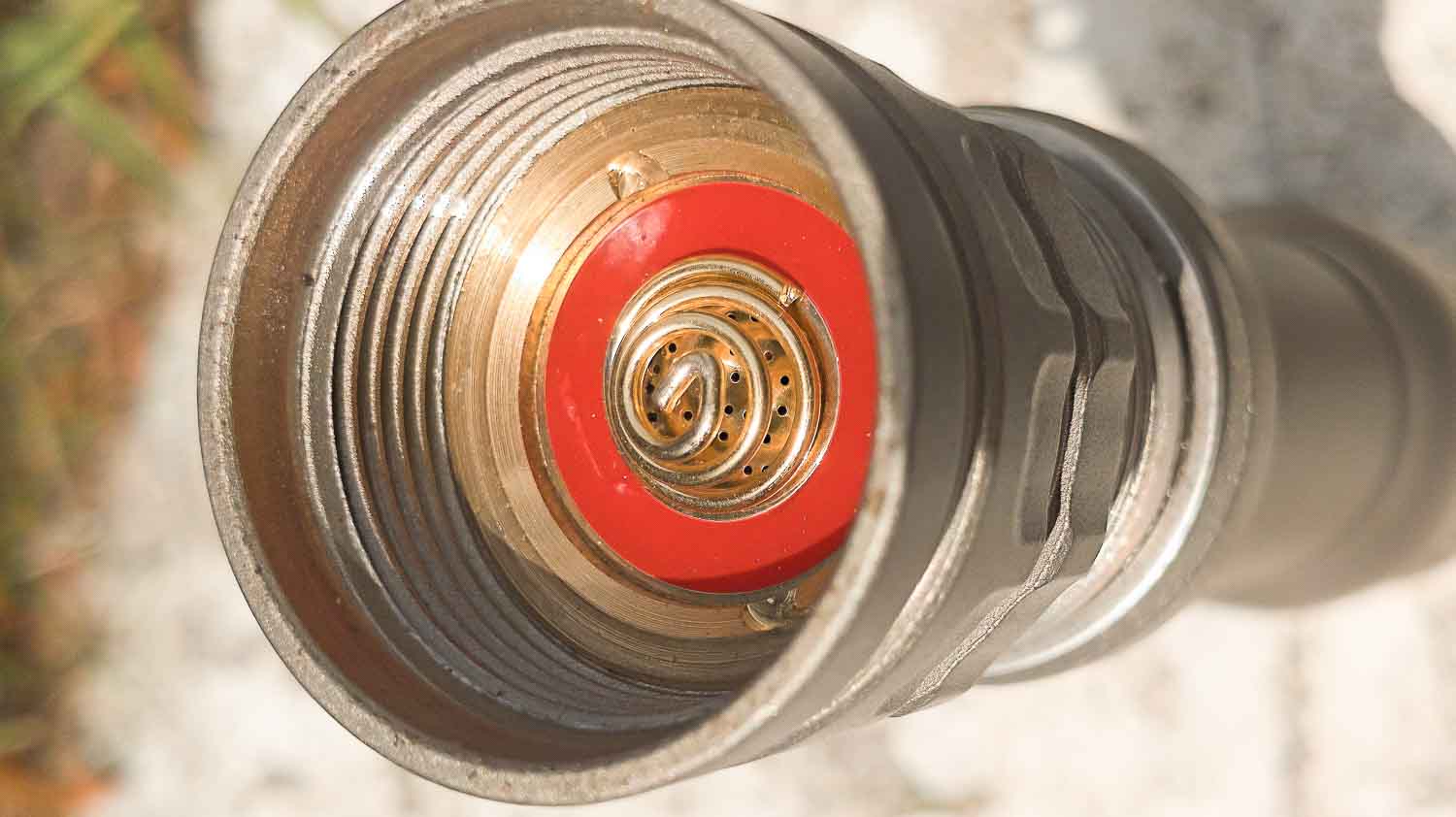 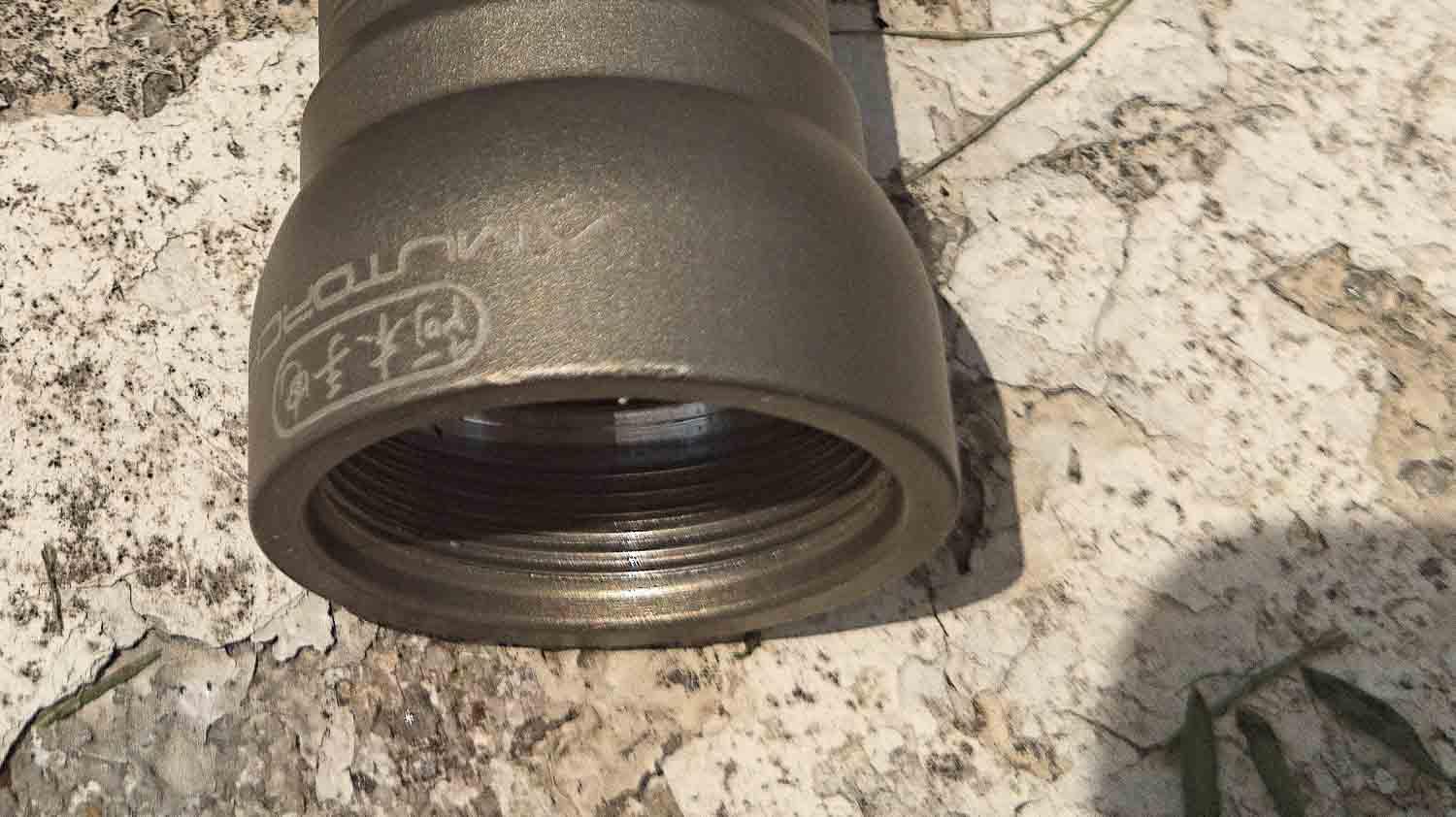 As you can see, the head is directly connected to the battery tube when screwed in tight, meaning that the heat produced by the LED can be transferred efficiently from the head to the battery tube, giving it a lot more surface area to dissipate the heat, which explains the type of knurling used here, and this results in the light never actually getting too hot even on max power constantly, as noted later in the review. Honestly, this is a superb thermal design, along with the vertical fins, which give it more passive cooling power. The inside of the tube is also anodized.

Down in the tailcap, we can see a brass ring screwed down retaining the spring board. There is a small gold plated spring inside of the tailcap. Now, checking the magnetic properties of the spring reveals it as being a copper alloy: the VG10 21700 is using a top of the line gold plated Beryllium Copper C17500 spring! It has very low resistance, which means you barely lose any power in the contacts, which usually translates into more stable runtime with better overall battery life, especially at higher power. It also means no modification to the contacts is required if you mod the light with higher power components. The switch itself is rated at 10A, which is also overkill. Superb.

Same story on the driver: uses a brass retaining ring, a BeCu spring, along with a circular copper wire soldered down around the brass ring, which compresses when screwing down the head.

A few imperfections aside, the light has great build quality in general, especially in regards to its heat dissipation design.

As mentioned before, there are 3 LED options for this light, being the XP-L HD 6500k CW, the same LED in NW 4800k, and an unspecified Nichia 219C emitter. These are good choices for this light, as this 21700 light has a larger reflector compared to most EDC style lights, which grants it more throw than most lights. This means it has a balanced beam, biased towards more throw than flood. Something with an XP-L HI 4000k, or even an SST-20 4000k 95CRI, would’ve given the light quite a bit more throw, and even excellent color rendition with the SST-20.

I have the XP-L HD 4800k version of the light. While the beam itself is fine, the problem is that it isn’t using an emitter known for great tint. It’s decent, but not amazing. There is some tint shift, not to the extent of an XP-L2 (which is known to have bad tint), but it’s still there.

Anyway, the reflector used is a smooth reflector, which explains the good throw. The smooth bezel is made of regular gold chrome plated steel.
Color rendition is also poor. Acceptable, but not something I’d count on to recognize and differentiate objects in any environment. Reds have no depth, and colors tend to be very muted and unrealistically rendered. CRI is unspecified, and is probably around 70. 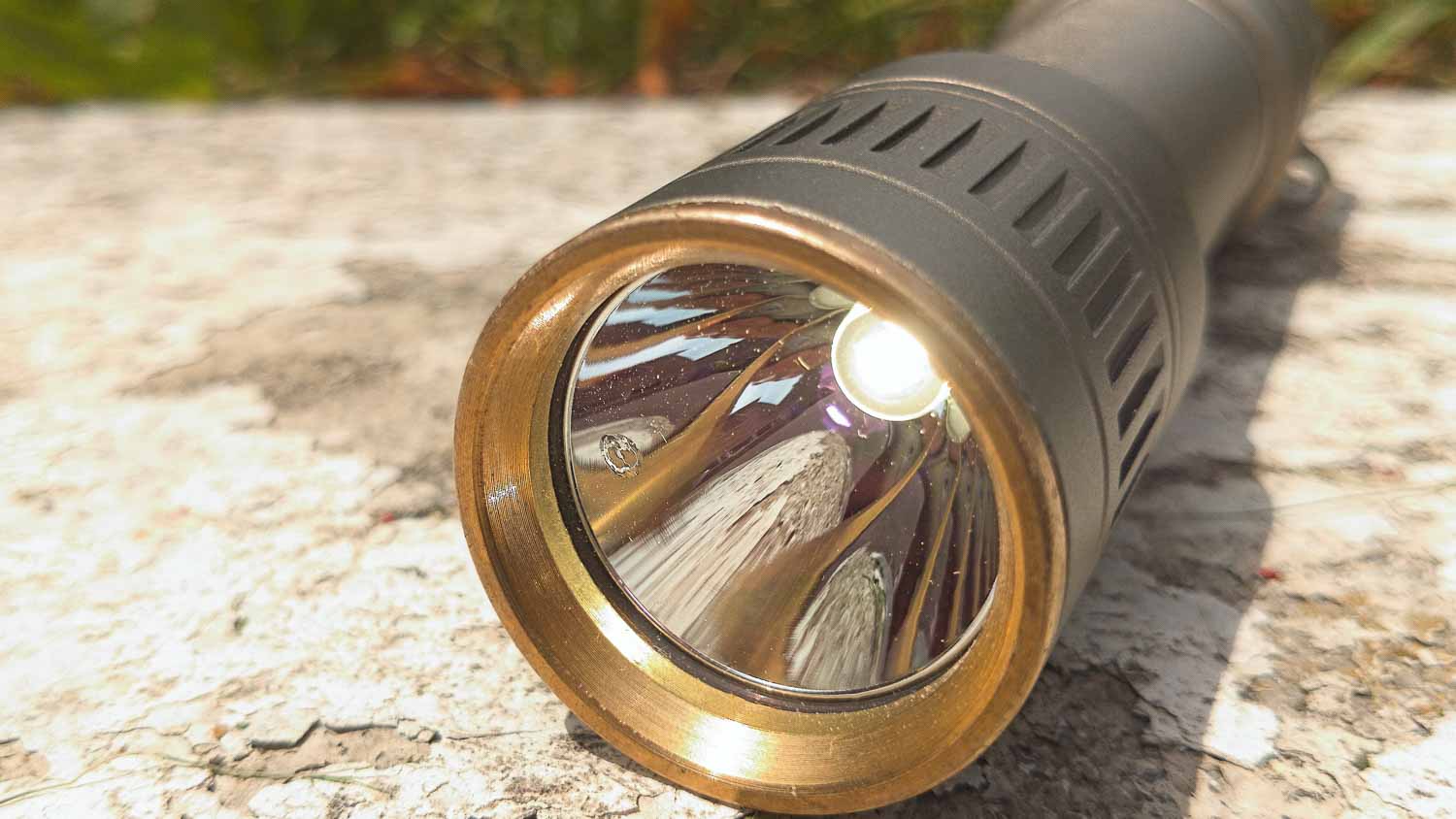 In regards to the driver, I suspect that it is using a 3A buck driver, as the efficiency of the light is constant over most modes, and there is no visible PWM on any mode, and regulation gets much better as the lumen output goes down by mode.

Very simple UI. Would’ve preferred a more complex UI with a moonlight mode(1 lumen), but this is still good.

Just turn off the light.

No PWM on any mode. 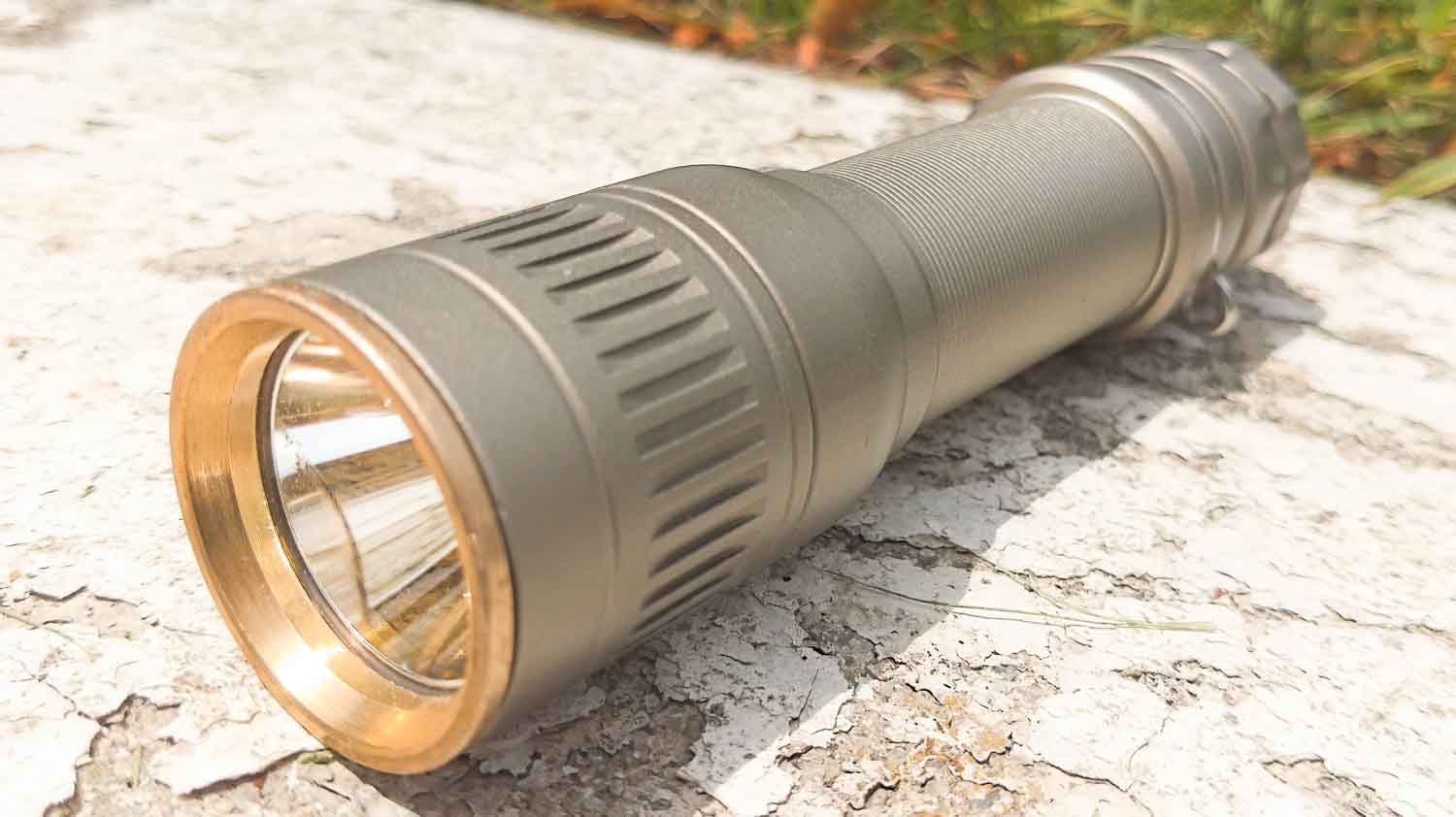 Like the name suggestions, the VG10 21700 is mainly built to be used with 21700 cells. Any cells can do, even 5000mAh 21700s, since it doesn’t draw enough power to actually need more than a 3A capable battery. That means you can have very long runtime, which is great. Protected cells are not recommended, since the springs are rather small, and using a protected 21700 may compress them too much.

Here we get to the meatier part of the review. Being powered by a 21700 cell, which have capacities from 3000mAh all of the way to 5000mAh. And only outputting 1000+ lumens on high, battery life should be very good on a 5000mAh cell. This remains to be seen however, as runtime is dictated by driver and LED efficiency.

The following data has been recorded using a 4000mAh Samsung 40T, a UNI-T Lux meter for lux and luminosity measurements according to the ANSI standard. 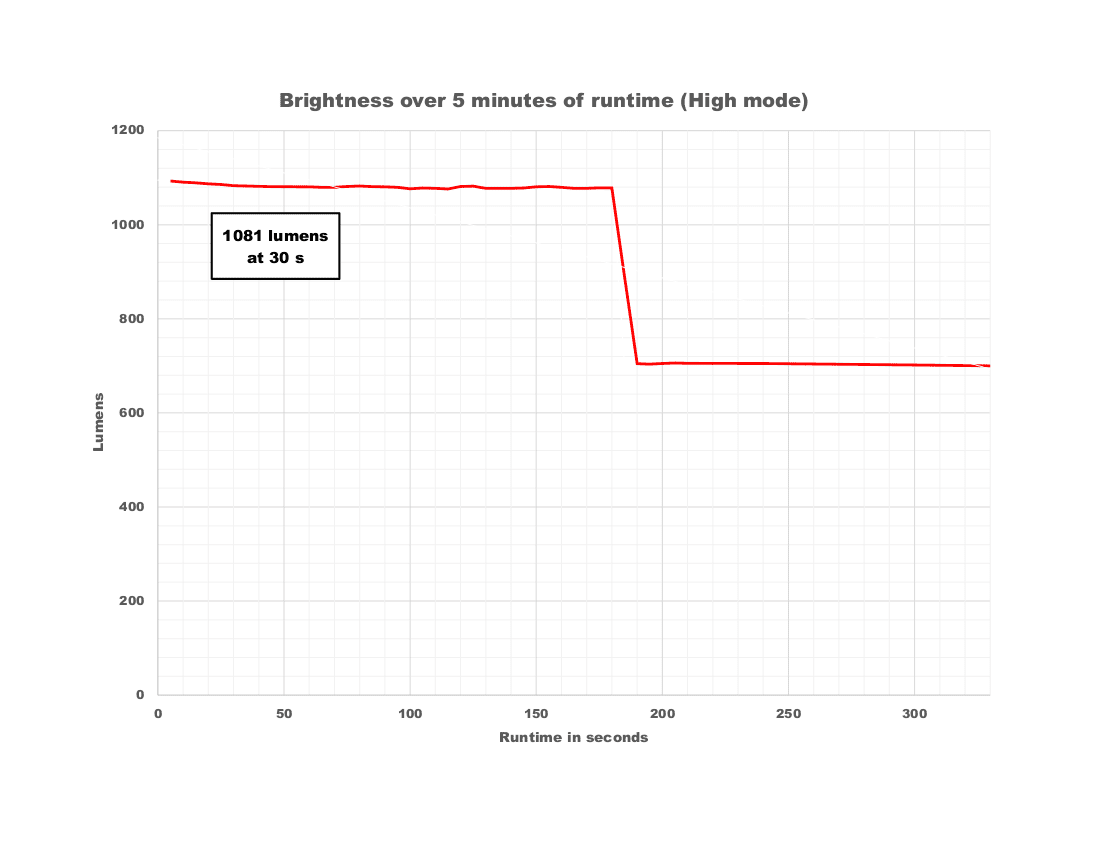 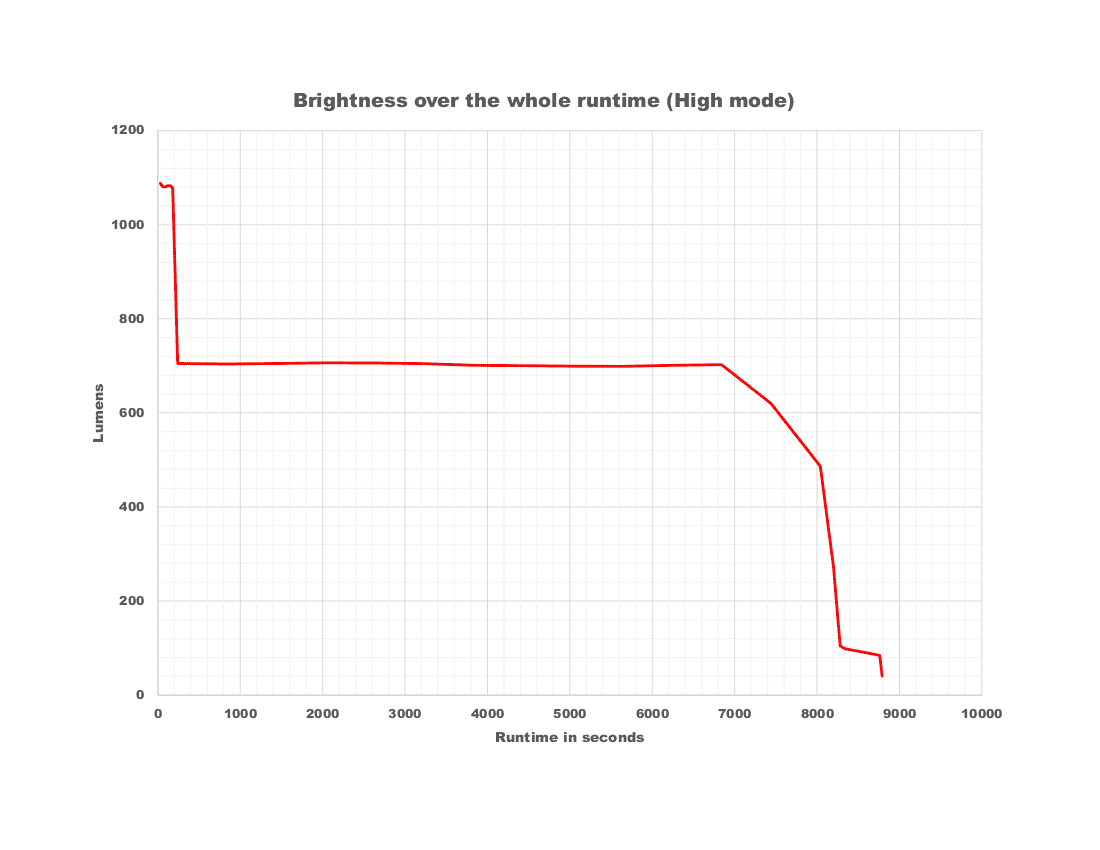 As you can see, the numbers are pretty accurate, except high brightness isn’t as advertised, which seem to be based on LED output numbers, rather than the light’s own brightness after optical losses. No integrating sphere was used, but numbers were checked via multiple tools, like the Uni-T Lux meter and my own phone’s light sensor. Was measured in a white box with almost no ambient light.
The graphs are pretty interesting too.

Output regulation is great after the stepdown. Luckily though, the stepdown can be reset just by going back to high. While the light does get very warm, output doesn’t diminish at all until current regulation can’t keep up with the LED’s needed voltage on high(forward voltage), which proves that the thermal design of the light is superb.
In exchange though, all parts of the light are warm when kept constant at 1000+ lumens, but that’s the tradeoff for great regulation and thermal design.

Regulation for medium is superb until you get down to around 3,3V, which is close to empty for the cell.
Regulation for low is perfect, and only shuts off when the cell is empty and LVP activates.
Throw is also quite good for a 32mm sized head XP-L HD light. With an XP-L HI or an SST-20, I’d be willing to bet you could get very close to 400m to that setup, or
even farther.

In terms of modability, I’d give the VG10 21700 an 9/10. Having very capable components along with good heat dissipation potential means a lot of stuff can be done without pushing the light too far.

The bezel, lens and reflector are easily removable, granting access to the MCPCB in less than a minute. Having a 3535 LED means you could easily change this out for an XP-L HI for better tint and more throw, or an LH351D for slightly more lumens or higher color quality, or even an SST-20 4000k 95CRI for similar throw to the XP-L HI with superb color rendering. The only thing I would change in terms of modability would be to remove the solid copper wire around the brass ring for easier driver removal and change, but this is still an excellent candidate for a direct 3535 LED swap, or even as a complete host.

Disclosure: This flashlight was provided by Neals Gadgets for review and NO other compensation other then keeping the light.

All in all, the VG10 21700 is a good all-around flashlight, with a simple UI, an efficient buck/linear driver, good build quality, great internal build quality, excellent heat dissipation, and good battery life with a 4000mAh 21700. I would recommend getting a 5000mAh 21700, as this light doesn’t draw a lot of current as mentioned before, and would benefit immensely from a 25% runtime boost. Things like making an SST-20 4000k 95CRI available would make this light that much better in general as a high performance general purpose light, since it would make color rendition much better and give it a large boost in throw.

Buy at NealsGadgets
Scroll to Top