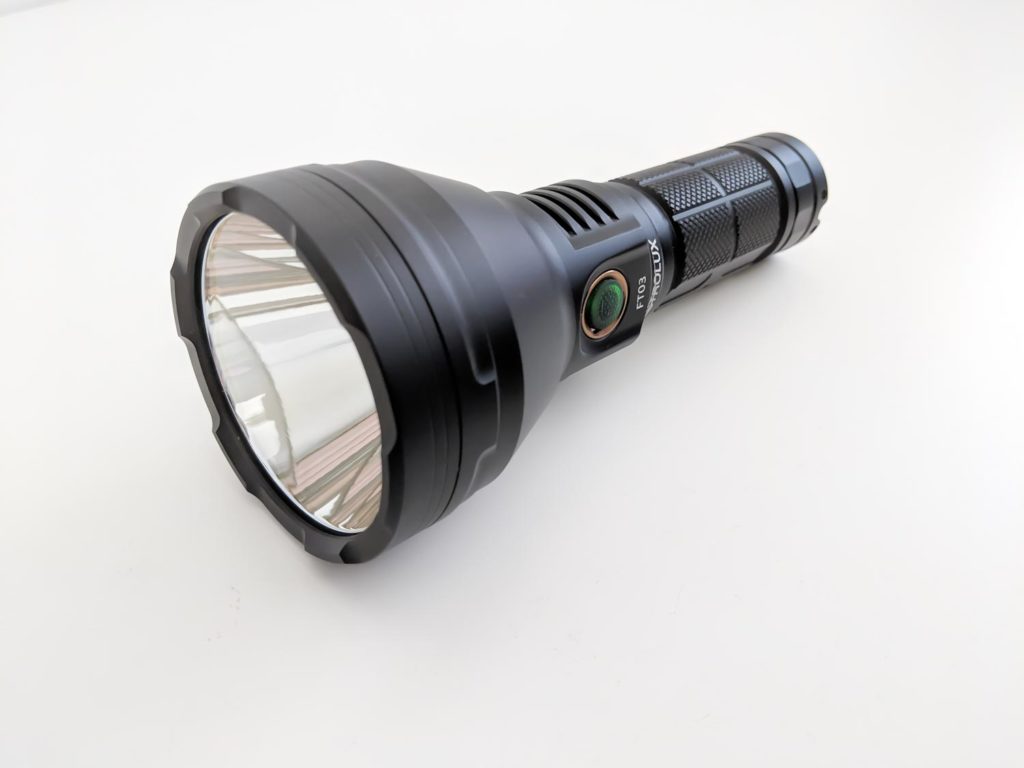 The Astrolux FT03 is their latest product and the size of the light is 1x 26650, which is somewhat larger as a standard C8 and about the same size as a Convoy L2 with a single-cell tube.
It features a large (about 60 mm) lens which makes it a real thrower! The only drawback of this light could be the intense hotspot which makes it less useful to use it indoors.

Astrolux is Banggood’s store brand product, and they feature a whole series of lights. However, this light seems to be produced by Mateminco, since the driver is branded Mateminco as well. Mateminco sells the product as the MT35 MINI. It features an electronic and lighted side switch which makes it very easy to operate. The light also has built-in USB charging and contains a Luminus SST40 LED, which I will tell more about later. 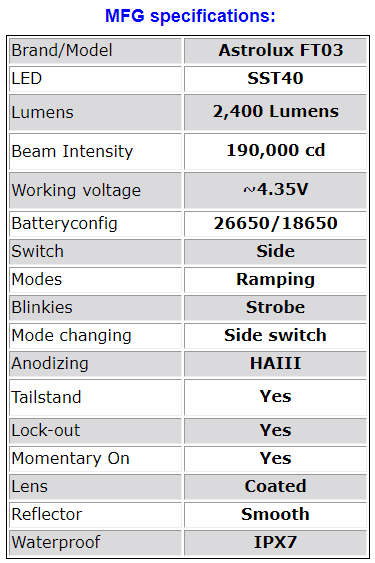 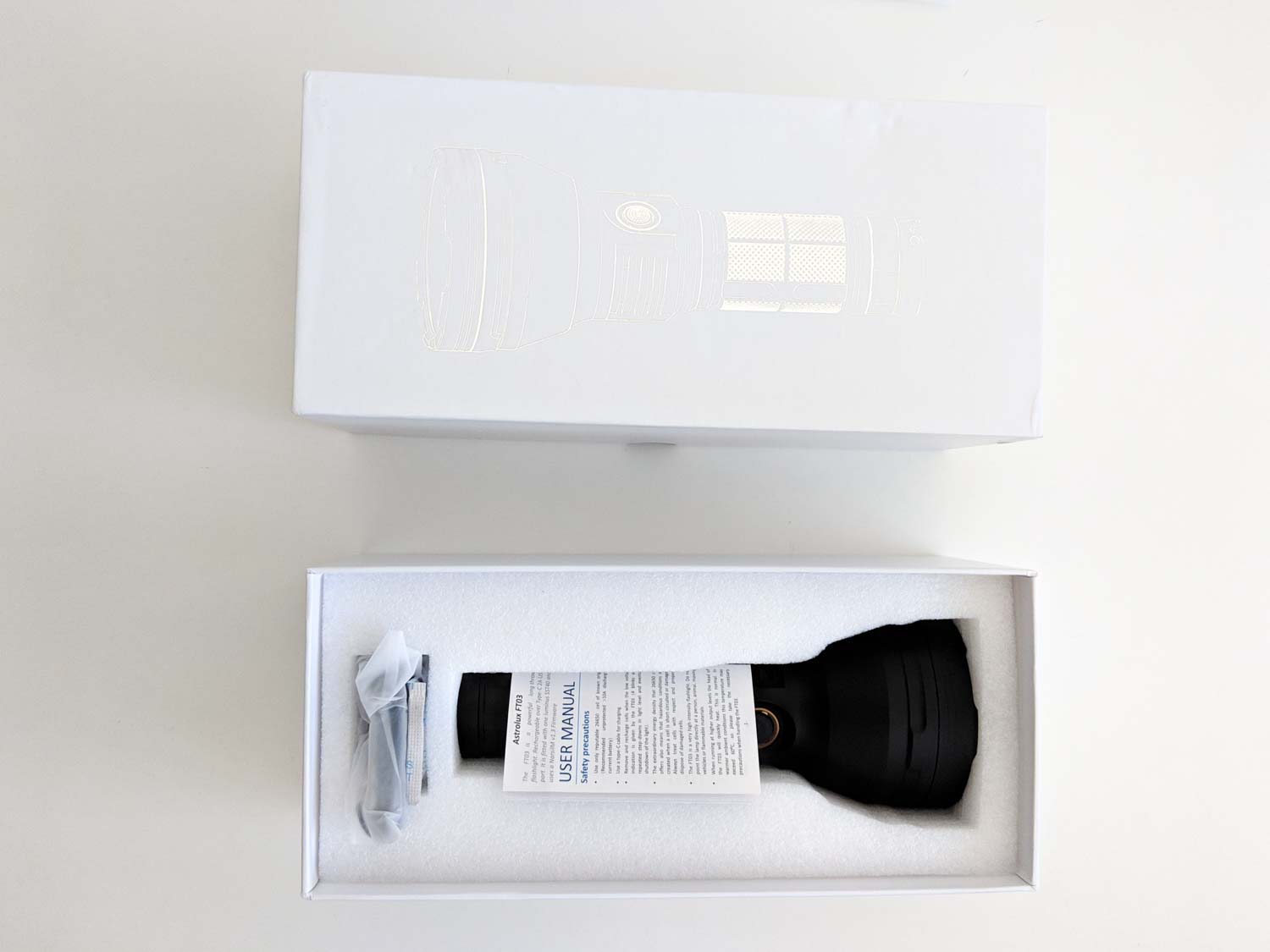 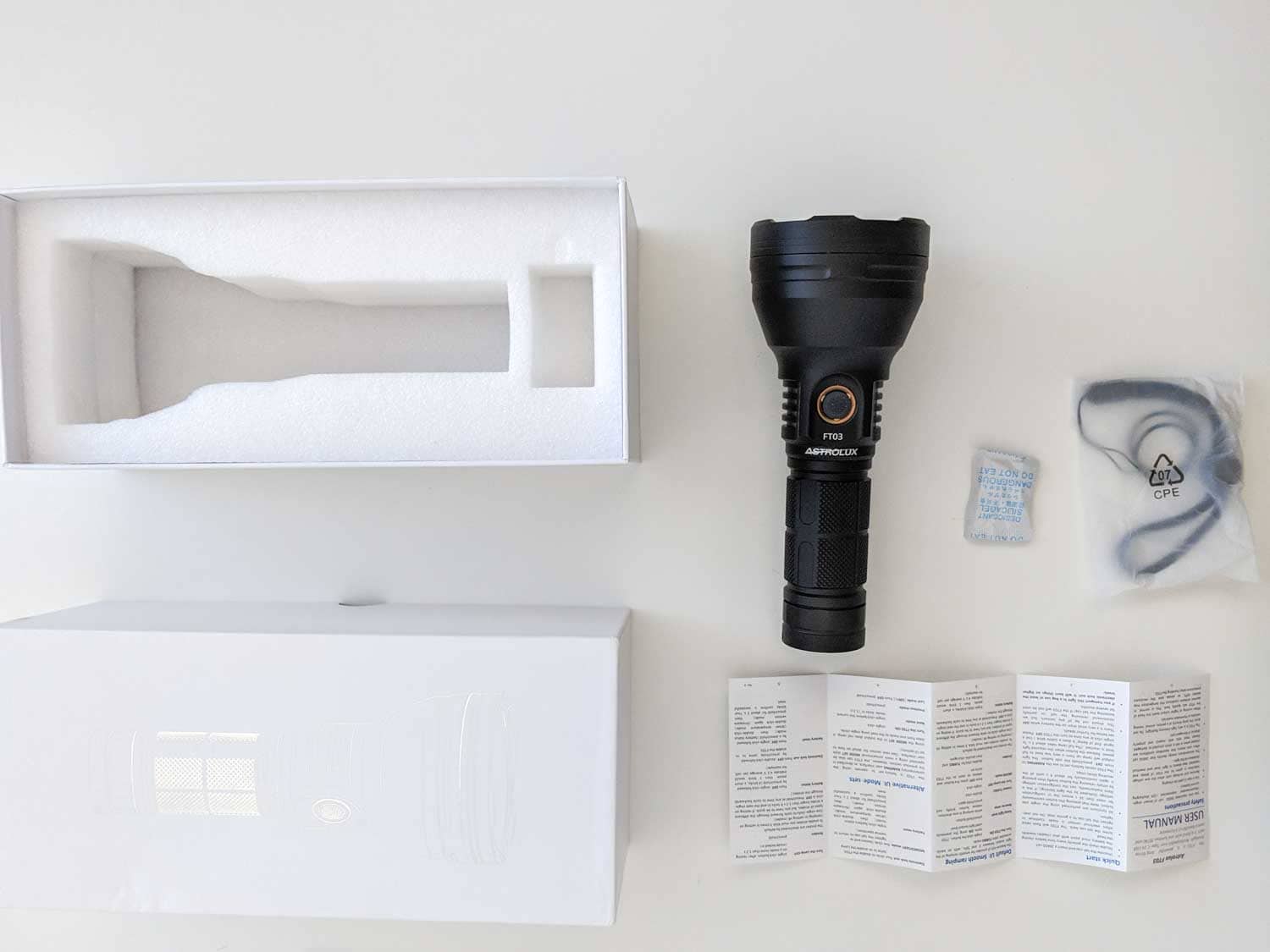 First impressions and handling of the Astrolux FT03

Let's start with the packing and content. The first impression is very good!
Where some flashlights come in a very piteous cardboard box, this one is exactly the opposite.
It comes in a very sturdy luxurious white gift box, with a silver printed image of the light printed on the cardboard box.

When opening the box we see the light comes well protected by white laser cut plastic foam which holds the light very well. It also contains a small bag of silica gel to absorb any moisture.
Furthermore, there is a small but comprehensive printed and folded manual, a lanyard, two spare O-rings and a plastic 18650 to 26650 adapter!

As said before, the light features an electronic and lighted side switch. The side-switch uses 3 colors to indicate the charge status of the cell, GREEN is OK, ORANGE is Low voltage and RED while charging. When the charge completes, the LED will turn green again.
This feature makes it very easy to operate since the switch is placed on a very good accessible location and because of the lighted switch it is very easy to find.

Another nice feature of this light is the built-in USB charging, which is very up to date with USB- type C connection. Since most phones nowadays are equipped with USB-C this comes very usefully, because you can just use your phone’s charger and you don’t have to worry about any wrong positioning of the USB cable, since USB-C is reversible!

The first time I connected a USB C cable to charge the light, nothing happened, so I thought: Drat! But after reading the manual I noticed that it says

So after using the light for a longer period of time, the cell voltage dropped below 4V and after that, the USB charging function worked like a charm and the LED lighted red to indicate charging of the cell! 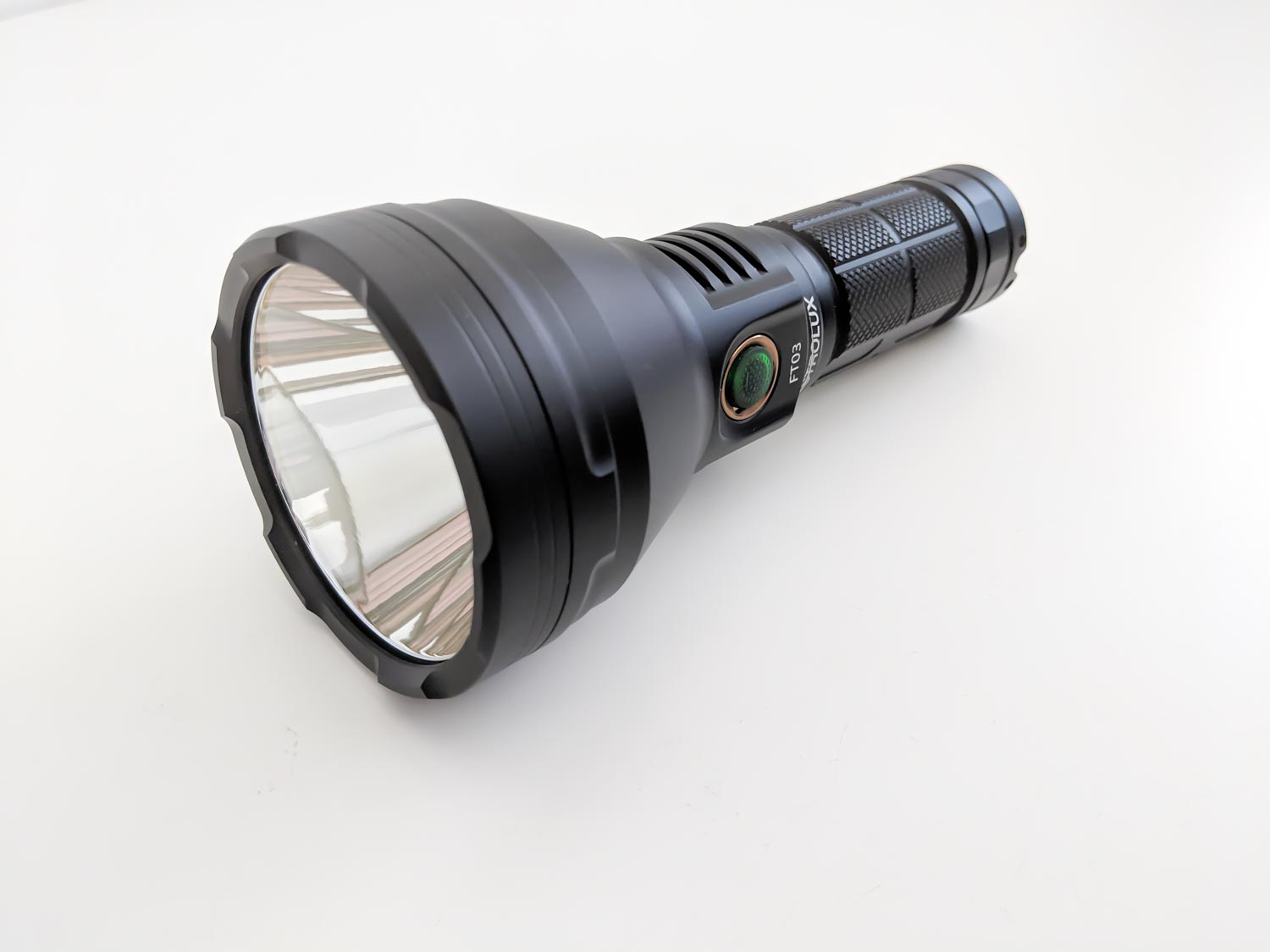 The build quality of the Astrolux FT03 is great, although the light does not feel very heavy, you can feel the materials are a snug fit and do match each other very well. It feels solid and thorough, without any strange rattling.

The anodization looks good, luckily it does not look like the cheap shiny anodization, it is more matte (not as matte as the Convoy C8+ I reviewed earlier though)
According to the specifications, it is military type HAIII, and I don’t see the need to test this and deliberately scratch a new product, I will update this part later on after some longer use if necessary.

The knurling of the FT03 feels good and provides enough grip. However, the grip of this light is exquisite thanks to the use of all milled grooves and flats on the tube of the light. The light is very ‘grippy’ and can be held firmly due to the combination of size, dimension, and CNC milling.

Another thing that stands out is the factory default double phosphor bronze springs on both ends, this creates a very low resistance path which improves the performance of this light. 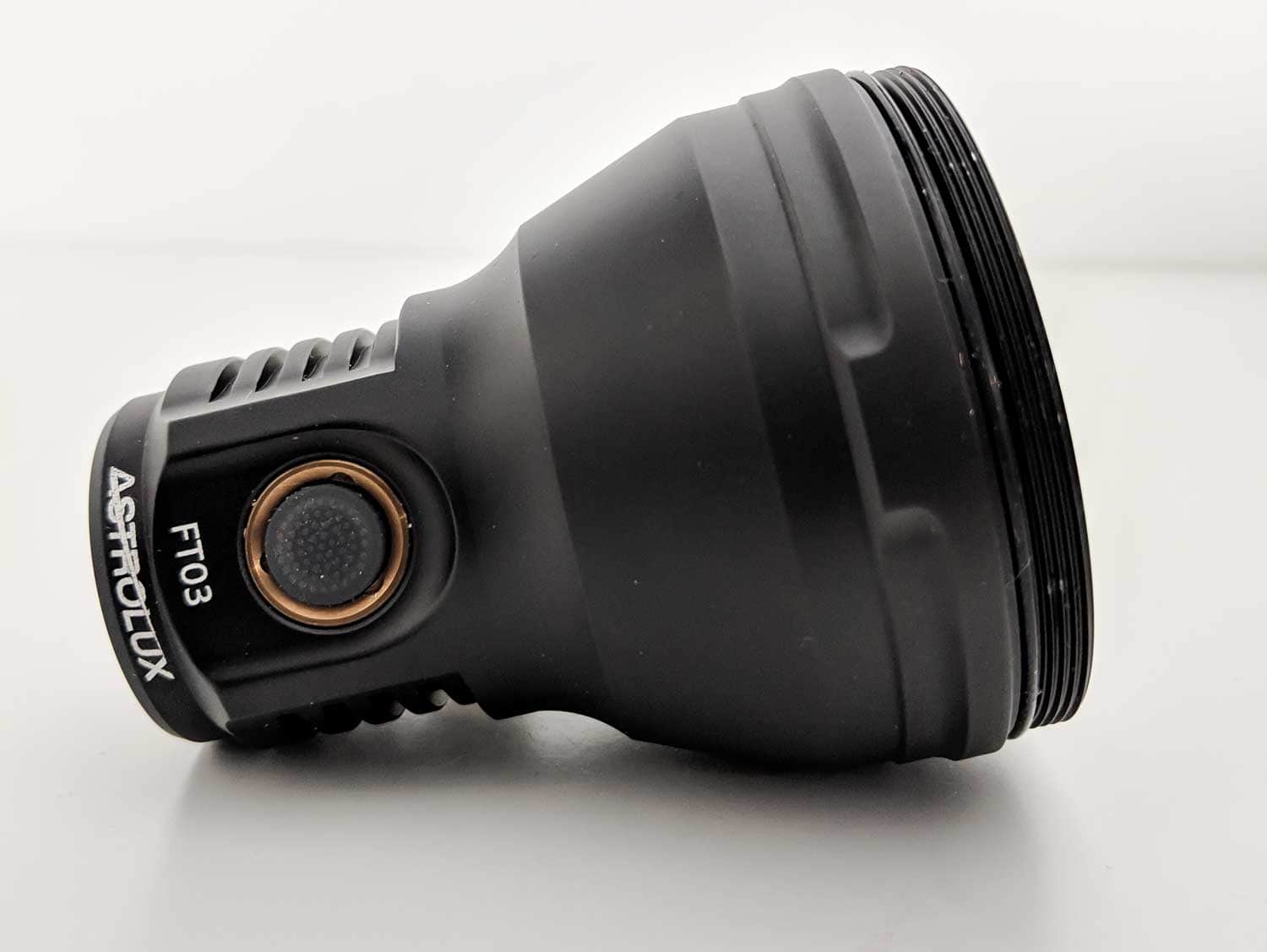 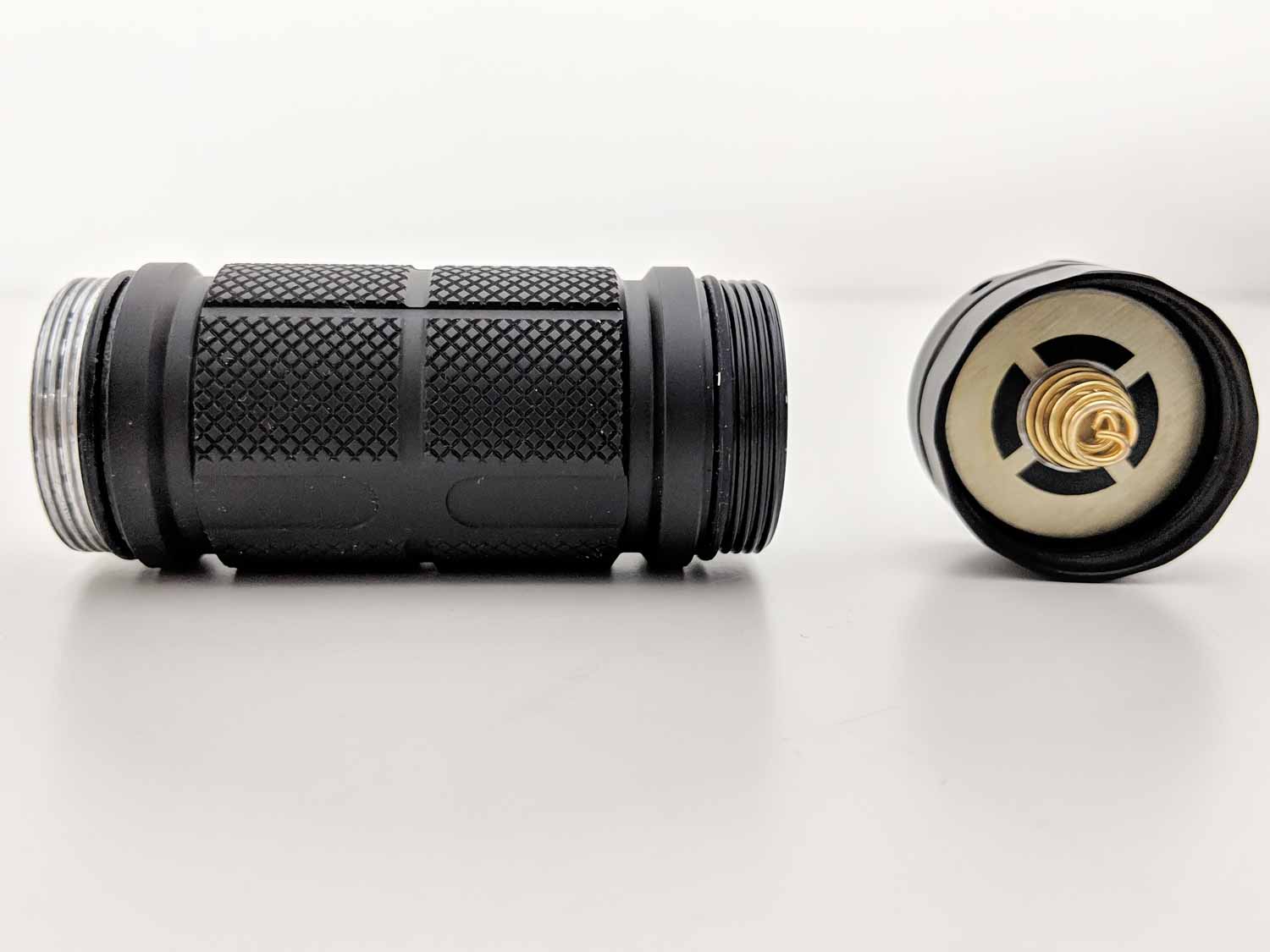 The threads are clean and rectangular-shaped which helps to make this a sturdy and reliable light. However, the thread pitch seems rather small for a light of this size, for instance, a convoy C8 has bigger threads, which might be a small drawback for this light.

The threads came not lubricated, a small dot of lubrication serves well on a light like this. 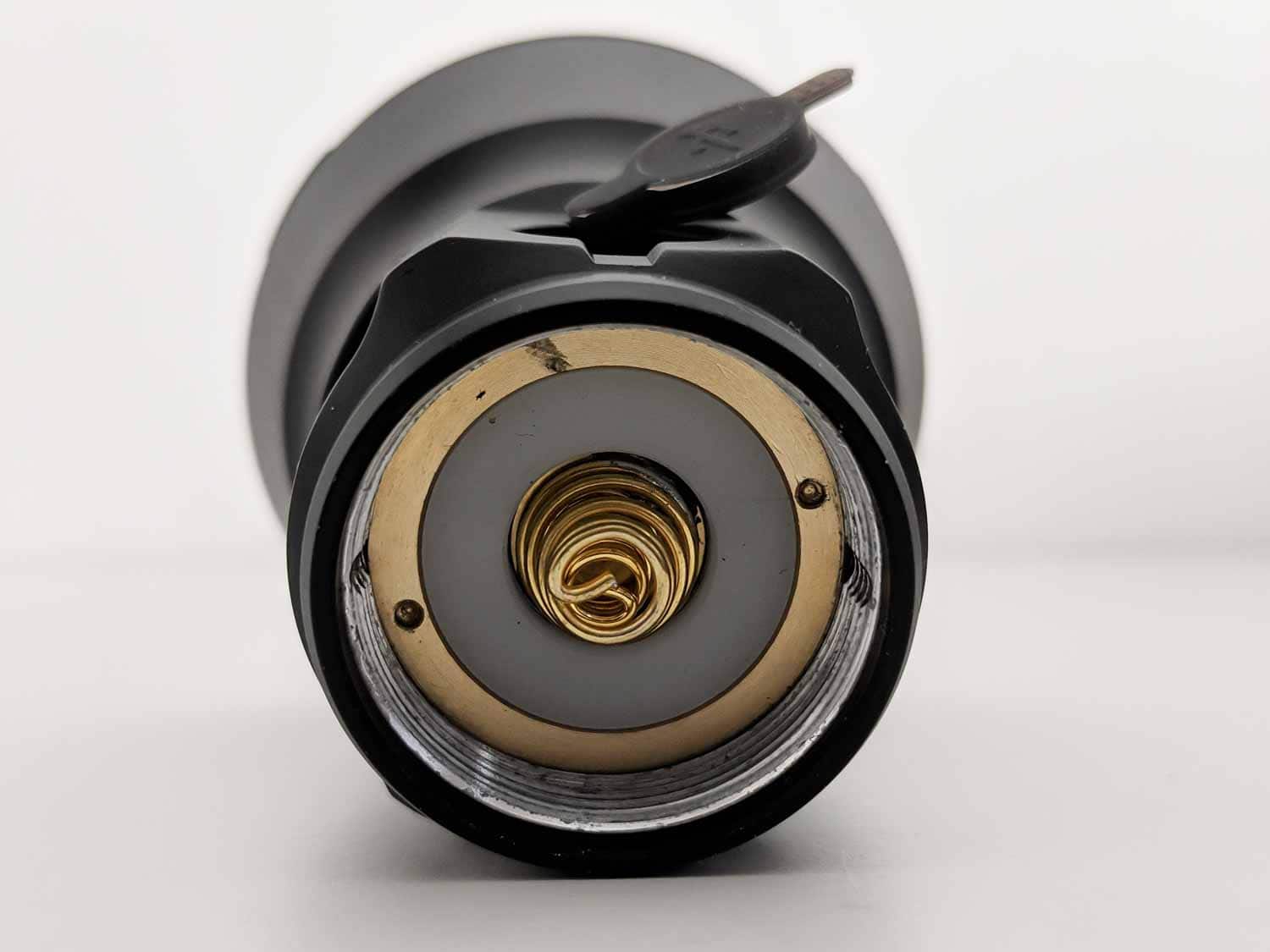 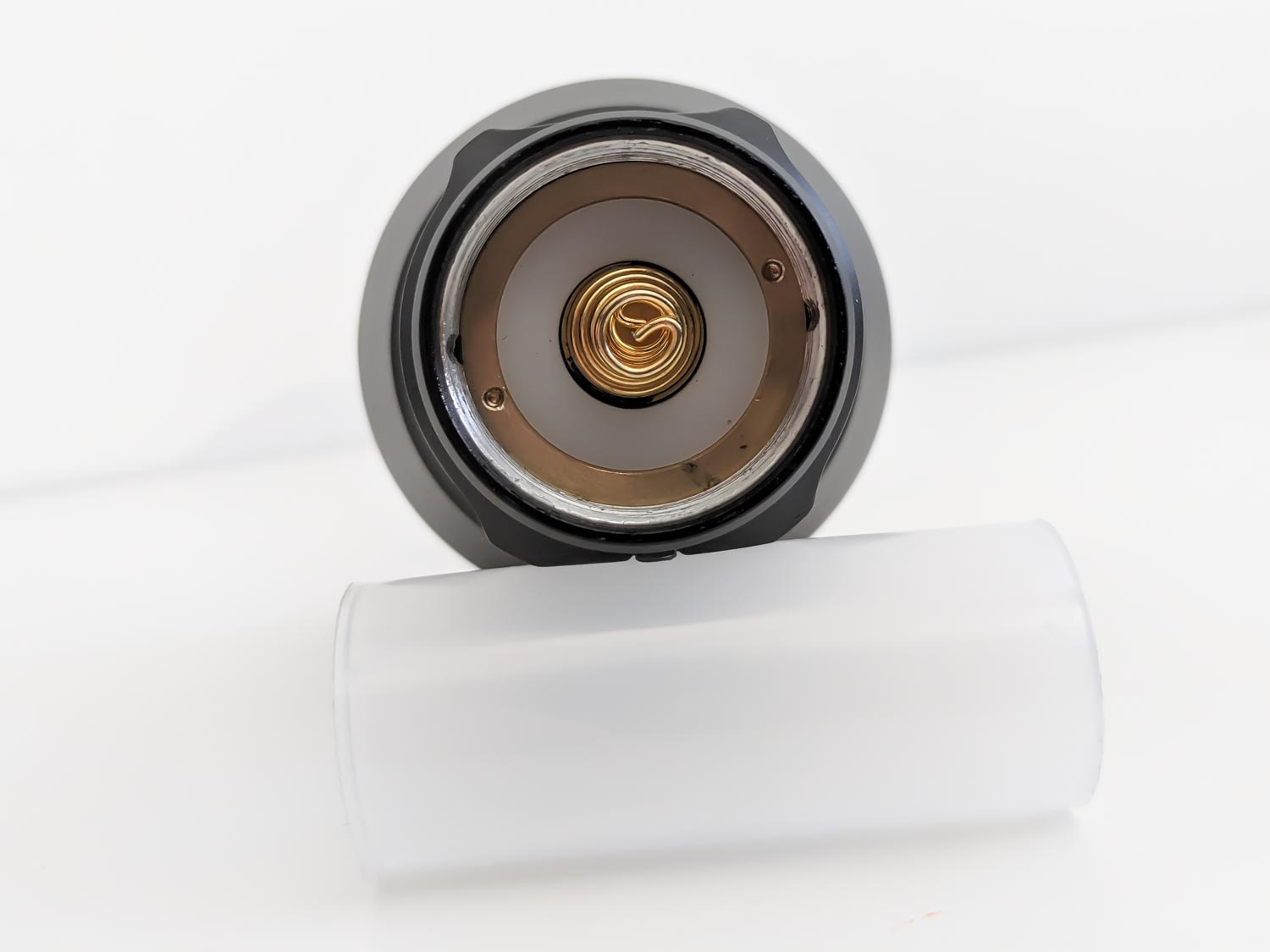 The Astrolux FT03 features a Luminus SST40 LED, which is available in Cool White and Neutral White.
This review is about the NW version, which I am very fond of. The tint is very pleasant and not too cold, just about right! The maximum output is according to specs 2400 Lumens.

The Astrolux FT03 lens is Anti Reflective coated and the bezel is slightly crenelated, which is useful to see whether the light is switched on when placed on the head.

The lens is sealed by an O ring and below the AR lens, we find the smooth aluminum reflector for max throw.
The reflector looks good and has a nice smooth finish, although it is not a mirrorlike finish like some other flashlights.  The finish does not affect the performance at all, the performance is outstanding! 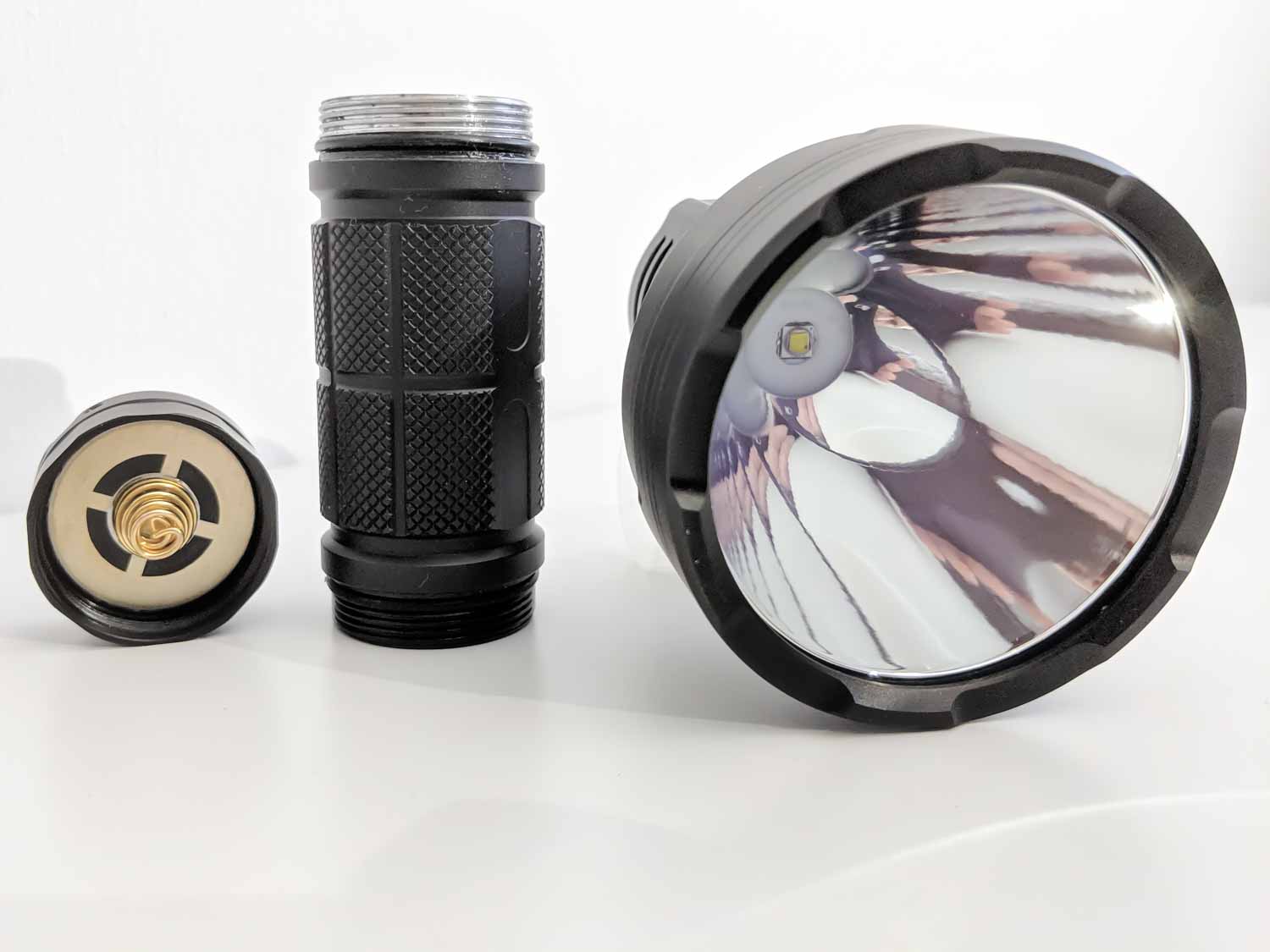 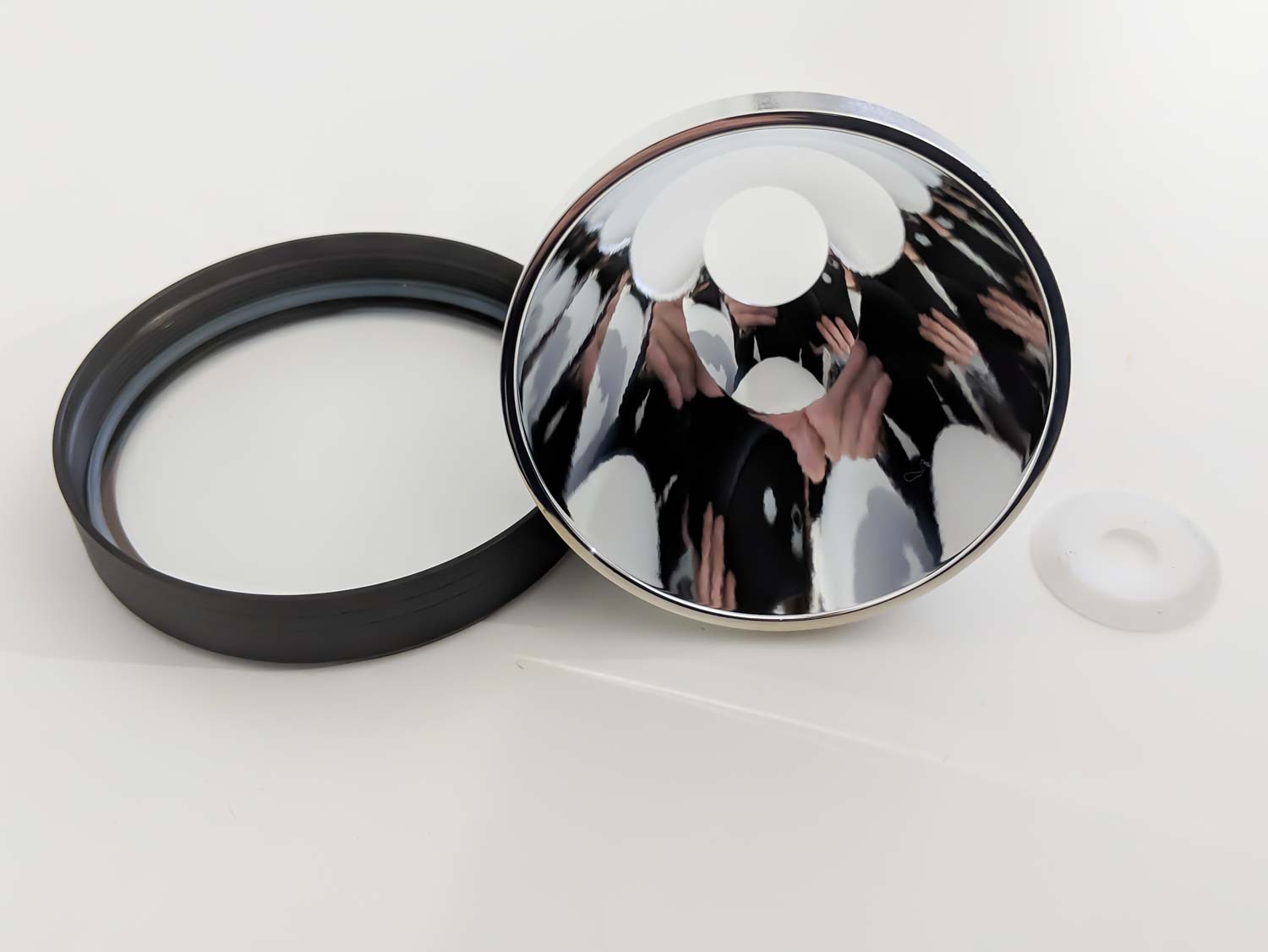 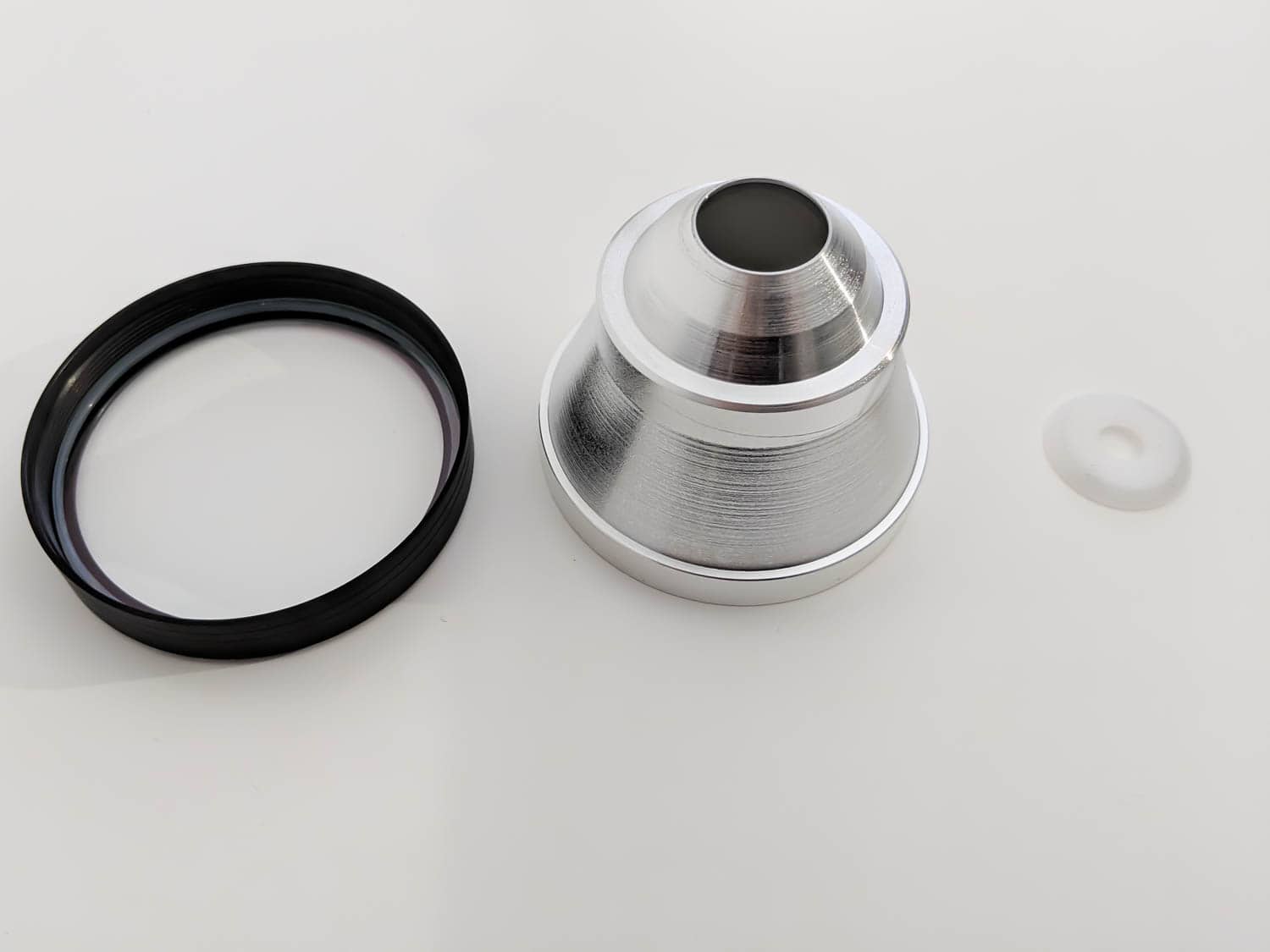 These dimensions are my measurements: 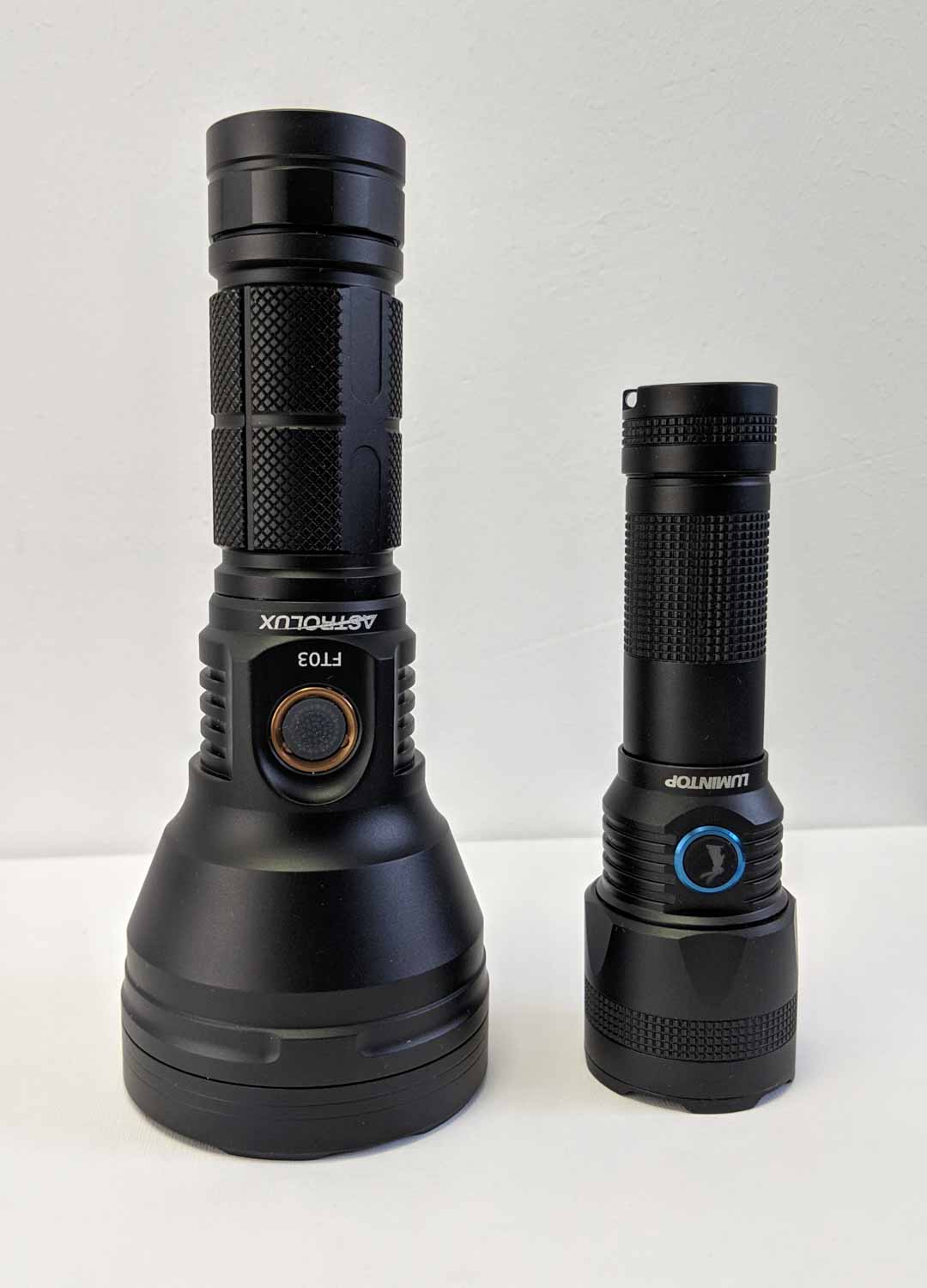 The Astrolux FT03 has an advanced user interface, which is called Narsil V1.3. This so-called firmware is designed by Tom E, a respected BudgetLightForum (BLF) member, with the input of other BLF members.

When switching the light on by a short press (at stock/standard mode) the light will use its lowest setting when the switch is kept pressed, the light output will increase until its maximum ramping level. Pressing and holding the switch again will result in ramping down until its lowest mode again.

A short press will switch off the light

Low/moonlight mode will be activated when switched off, pressing down the switch for 1,2 s.
Doubleclick will activate Turbo, which is higher than the maximum ramping level, as said it will give you a whopping 2400 Lm!

The nice part of these features is that they work independently from the last memory mode, so after using one of these options, the light will still remember the last ramping intensity or other chosen mode set.

To check the battery voltage, press the switch 3 times. The LED and lighted switch will blink 1 to 4 times to indicate voltage. After a short pause, the voltage decimals will be given in a range of 0 -9 blinks.
For example, 4 blinks, short pause, and 1 blink is 4,1 V

Press the switch 4 times, the blinking indicates that lockout is activated. To release lockout, simply press another 4 times.

Press the switch 5 times. To release momentary turbo, unscrew the tailcap to reset this feature.

By default disabled. But can be enabled using the corresponding steps as described in the manual. Once enabled, the strobe can be chosen by double click for Turbo and when in turbo another double-click to activate strobe mode.

When someone prefers a more classic type of mode sets instead of ramping, the Astrolux FT03 can do that, because of its Narsil firmware.
12 mode sets are available, with all kinds of different possibilities.

Another feature that can be customized is the LED behavior of the side switch, this can be switched on or off. Battery level indication using the side-switch can be turned on or off as well as the possibility to turn on or off the switch LED during the use of the flashlight.

Charging using the internal USB connection is quite fast, it can charge at a maximum current of 2 Amps, so make sure to use an appropriate USB charger which can provide enough current.

Using a standard Ipad charger I measured around 1,9 Amps at the start, but decreases as the cell voltage increases, it kept quite steady at around 1.6 Amps for a while.
Also it uses USB C which is up to date since micro USB is deprecated.
During charging the switch LED colors RED to indicate charging when completely charged it will turn GREEN.

OK, time for the more serious stuff, the performance!

This light is in a completely different class on its own when comparing it to a standard C8 flashlight. After enabling turbo you’ll definitely see a huge difference!
It has a nice Neutral-White beam with a color temperature of around 5000K, and give a very pleasant beam and tint, and enough spill.
I turned on the light and accidentally pointed to a house around 100m ahead and accidentally lit the whole living room 😉

@3m with a freshly charged Samsung 30Q (because I only have matched cells, I still have to buy some new 26650’s for another proper test) I measured 16670 Lx at startup.
After 30seconds the light began to feel quite warm already and began to generate a ticking sound, it sounds like thermal expansion sounds (just like you get when you stop a car which just has been heavily used)
After 30 seconds I measured 25560 Lx, which is converted to candela, 240 kCd and 230 kCd which is amazing for a light this size and price category as a "flashlight thrower".

Although the beam shot pictures aren't very sharp, you can easily see the winner! The Astrolux FT03 was set up against the Convoy C9+ and Lumintop Zoom1

The tower is about 650 meters away. 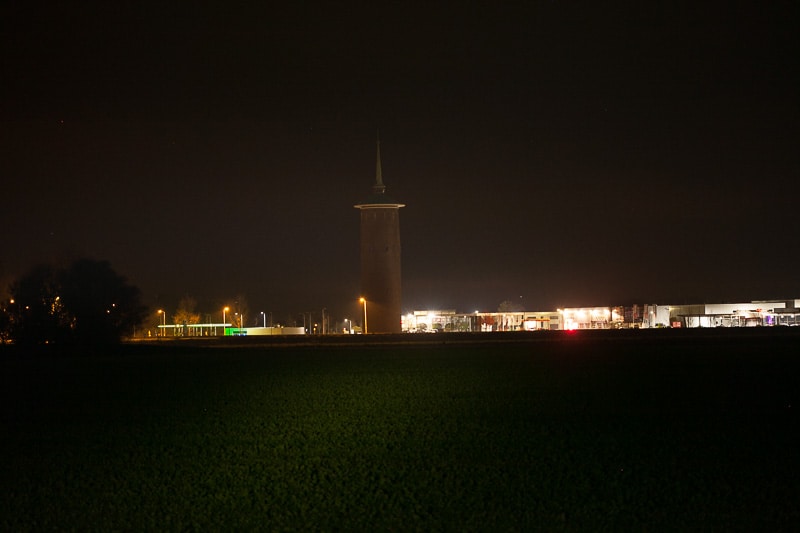 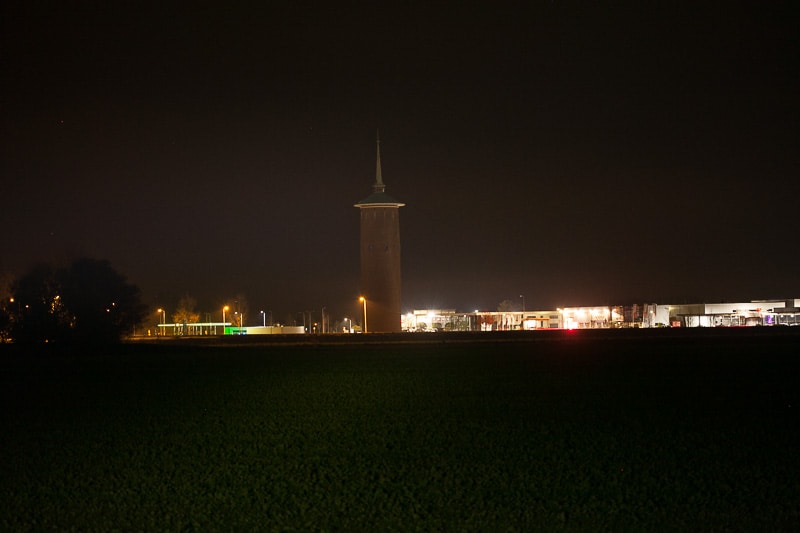 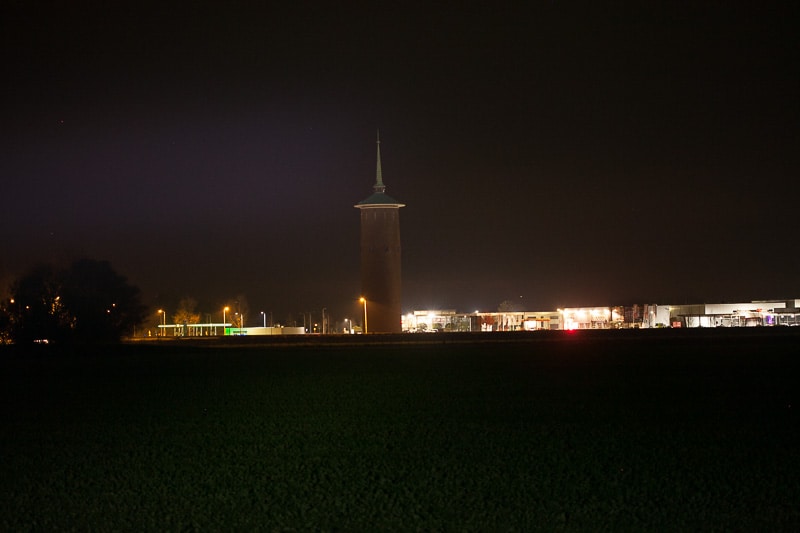 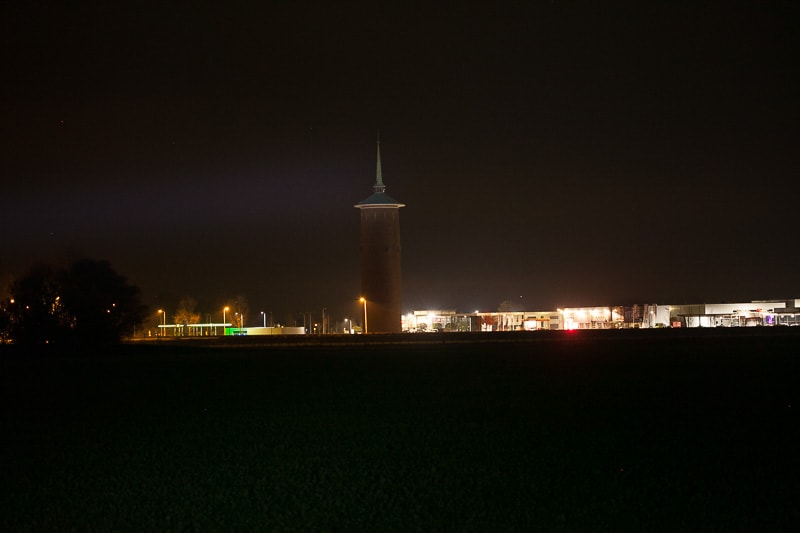 This tower is about 450 meters away. Click for larger pictures. 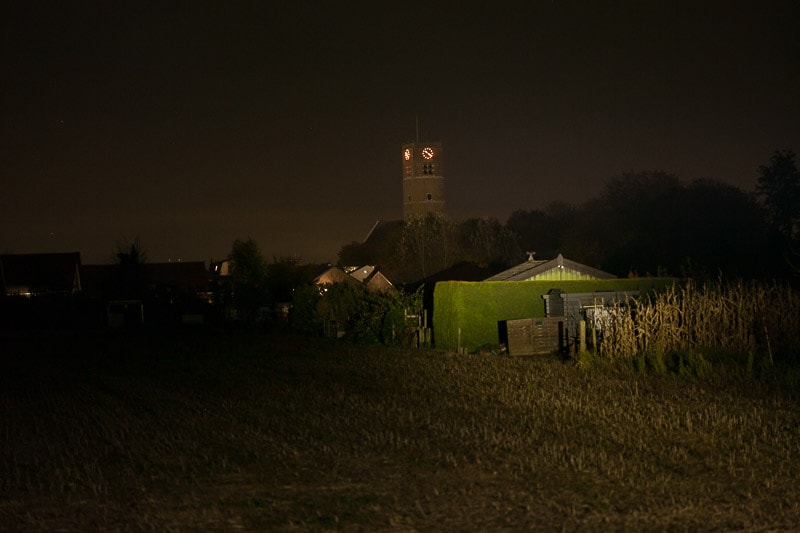 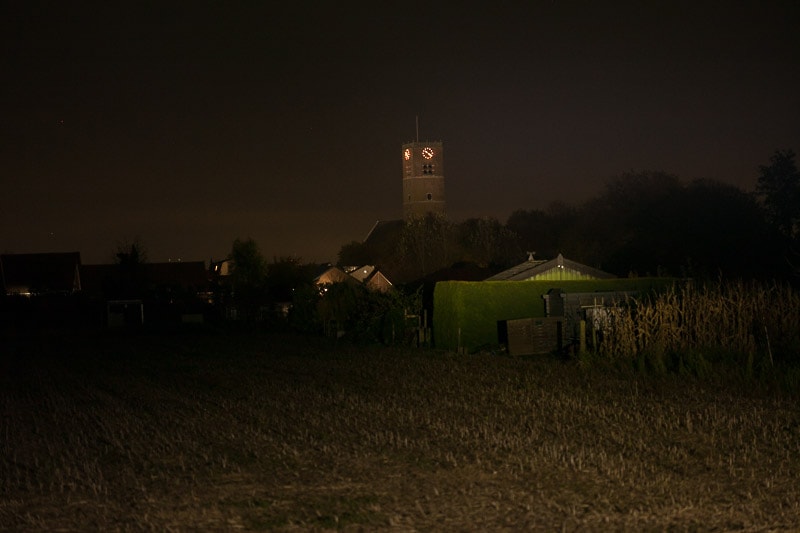 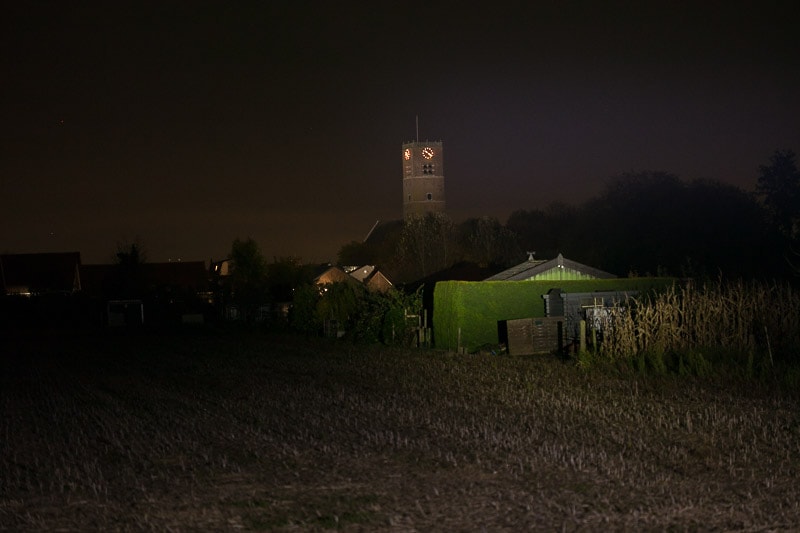 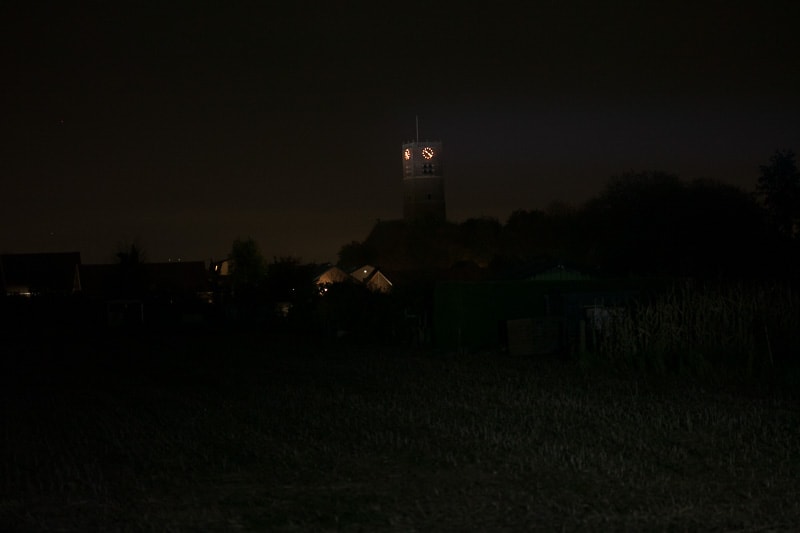 Disclaimer: The Astrolux FT03 was provided by Banggood for review

The power of this light with the large reflector is its extreme throw. Moreover, its claimed performance is lower then it’s actual performance.
The Astrolux FT03 is a flashlight I really like, due to its form factor, the excellent grip, the size and the use of a side-switch with colored backlight. This makes it perfectly easy to find and locate in the dark.

The Narsil firmware offers numerous opportunities, for each user there seems to be an option that fits your needs. Also, ramping firmware as Narsil is called by Astrolux, works very intuitive and I really like it.

Another positive thing is the built-in USB-C charging, which makes an external battery charger unnecessary. The only downside I can think of is the intense hot spot which makes the light less useful for close-up work!

Where to buy Astrolux FT03