2017 was a year with some great new powerhouses seeing the light..lol Olight had already a few powerful flashlights in their lineup being the Olight X7R (12000 lumens) , SR Mini II (3200 lumens), and the X7 Marauder. With the X7 throwing 9000 lumens out of the front.
But 2018 has another surprise for the flashoholic, the X9R Marauder.

What has the X9R to offer on paper?

Olight has set foot on the 20K island where Acebeam and Imalent are currently living. The Olight has also something interesting to offer. A 25000 lumens hand warmer.

I hoped to see a longer runtime, as I will explain below. The flahlight specs looked more promising at first, but there are already some lights that push the 20K or even the 30K and can run for a few minutes before stepping down.

In the above graph you can see that L8 can pump out 25000 lumens for 3 minutes before it drops down to L6 with 6400 lumens. I know that 25000 lumens will heat up very quickly, but including active cooling, I hoped from something a little longer. But still, I don't think you can skip a step-down with this amount of heat being built up. EDIT: the X9R doesn't seem to have any fans as was first announced... so no fans in this bad boy.

Lowest mode on the X9R

The lowest mode is 200 lumens. Especially for this sized light that is understandable, but somehow a 10 or 20 lumens would have been great to use for more than just search and rescue... like survival.. reading maps, lighting up your tent without blinding someone. Below you can see their reasoning. The head must have some sort of sensor in order to decide whether max is L6 instead of L8. 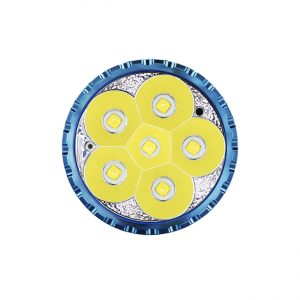 Olight shows a price of $ 600,- which is in the same ballpark as the Acebeam X70. But that is a loooot of money. Especially considering the current competition. LED flashlights have come very very far.. So if you have $600 cash to burn.. go for it. On June 8th 2018, the day when this will be available, you can get 25% discount at olightstore.com