Please don’t compare this White Laser Fenix TK30 with the old TK30. I’m not sure why Fenix used the same model name for 2 different lights. The Fenix TK30 we are now talking about is the TK30 White Laser edition. A handheld flashlight with a Class 3B Laser emitter. This means it’s not an LED flashlight but an LEP flashlight.

I’m pretty excited about this light and look forward to seeing how it performs.

Please keep in mind these are not these types of lasers you can see on laserpointforums.

It feels like any other tactical flashlight. Which means it can fit in your pocket but produces a whitish beam for up to 1200 meters. This is incredible for this small of a light. It is a little on the bigger size compared to the traditional 18650 tactical lights. It’s a bit longer and a bit wider. It uses a side switch to change modes and a rear button for power.

The tail switch is a forward clicky switch so you can use it for momentary on. (signaling, Morse coding).

Because of the electronic side switch, you can simply hold it with your thumb resting on, or close to, the side switch. Since it only has 2 modes you don’t have to be afraid of entering a hidden mode, except for maybe the Strobe mode.

It comes with a lanyard, pocket clip, and a holster. Just make sure you’ll double-check the lip of the holster. The lip is a little on the short side so the Velcro parts barely touch each other. Fenix is probably saving some money by producing 1 type of adjustable holsters that fit a couple of their flashlights. I can understand that. 1 part of the Velcro can be adjusted. You can re-attach the Velcro part so the lip is either longer or shorter. But for a 269 dollar flashlight, I would have hoped they put in some extra time and resources and make something dedicated and special.

Instead of the regular knurling, the TK30 uses reeding on the tailcap and body tube. Both in the opposite direction. The tailcap has horizontal and the body tube has vertical lines.

The quality of the TK30 looks the same as the PD35 Tac, PD36R, and TK22 v2 I have. Not better, not worse. So don’t expect a jump in quality when paying big cash for this light.  Only the front looks a little different with a brushed stainless steel bezel. Threads and everything looks great. Enough grease is applied so the threads go nice and smooth.

Nope, the TK30 doesn’t use an LED, but an LEP (Laser Excited Phosphor). (10mw according to the manufacturer?) You would probably think this means a pencil-shaped beam like the regular lasers you can buy, but no, it’s not so bad. Although the beam is pretty narrow, it’s nothing like a green, red or blue laser people talk about at laserpointerforums! Also, it’s not really a White laser, but a blue laser.
This is what Fenix tells about it:

“The blue laser hits the unique fluorescent crystal material and stimulates the fluorescent crystal coating to form a broad spectrum white light. After multiple optical reflections inside the light source module and triple-coated lens processing, a white laser beam similar to the LED spectrum is emitted. “

When it comes to the divergence of the beam (mrad), I am pretty new to Laser Technology so I can’t really tell unless the manual tells it. Since the manual doesn’t mention the divergence I can’t tell you either.

The UI is very simple. It uses the rear switch for power and the side switch for mode-changing.

From OFF: rear switch for Power

From OFF: side switch

The UI is very straight forward. Side switch for 2 main modes and tail switch for power.

Fenix included an ARB-L21-5000U battery with the TK30 kit. This is a 21700 type USB-C rechargeable battery. This means 2 things: it’s too long for 99% of the battery chargers on the market, and 2, you need to have an USB-C cable. Fortunately enough, they included the cable in the box.

It also has protection to prevent short circuits or overcharging / over-discharging.

The nipple on the positive side of the battery has a little hole. While charging you can see a tiny red light inside the hole which turns blue when it’s fully charged. Very simple to understand.

The charge speed I measured was 1.4A on a 2A USB charger. It’s supposed to do more than that, but that probably depends on the charger in use. Fenix recommends a 1A charger or 5A at maximum. I have no more powerful USB charger at the moment to test this.

18650 batteries won’t fit without an adapter. They will rattle and not make contact.

All of my readings were taken from a fully-charged Fenix ARB-L21-5000U.

All output numbers are relative to my homemade Integrating Sphere. I now set it is now up with an Extech SDL400 Lux Meter for measurements. I included a Kenko PRO1D ND16 filter, so the meter doesn’t get overloaded. I’ve done the base measurement with a Convoy S2+, tested at 137 lumens.

I used a Fluke 77III to measured amps at the tail cap.

It almost hit 500 lumens on High with my measurements and about 132 on Low. This is good and close to what the manufacturer claims. I measured the amperage at the start with a fully charged battery.

Runtime on high is about 3 hours till it drops to about 80 lumens.  At 3:26 it turned itself off. 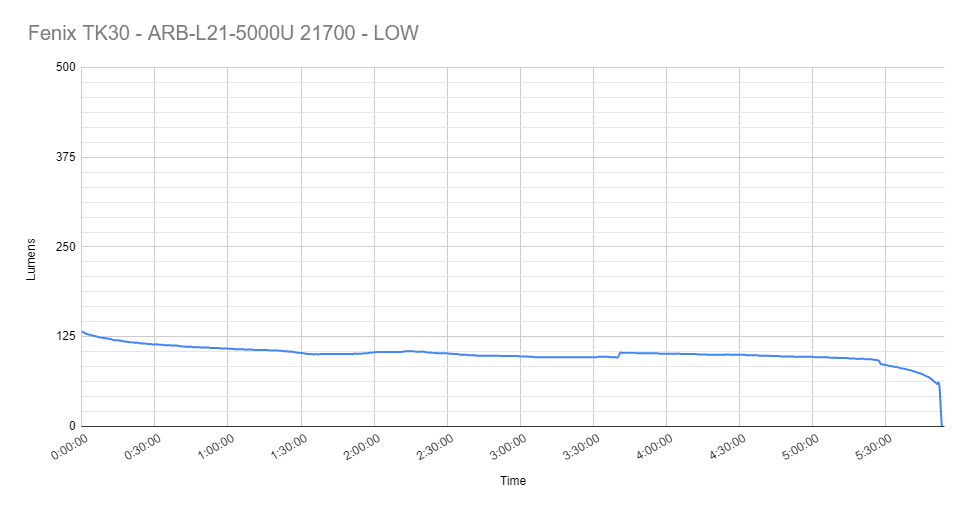 The runtime graph looks similar to that of the Fenix TK22 v2.0. The zigzag output isn’t really noticeable by eye, but you can’t really fool a data logger.

After both runtime tests, I measured the battery at 2.8V.

Measurements were taken outdoors with a professional Hagner E4-X Lux Meter. I took measurements at both 10m and 20 meters.
Using the highest mode, I get:

Those are very impressive numbers for such a small flashlight. Fenix claimed 363,866 cd, which is a 5% difference with my readings at a 20-meter distance. You can see that measuring at 10m and 20m can make quite a bit of difference.

For comparison, I used throwers, not tactical flashlights. The TK30 is like a long-range flashlight in tactical clothes. For the following beam shots, I used a Canon EOS 5D mk2 with a 100mm lens.
Settings: F4, 0.5 seconds, ISO1600, 5000K.

Disclaimer: This flashlight was bought with my own money. I have not been paid to review, nor have I been holding back on problems or defects.

I’m impressed with Fenix TK30’s performance. Its throw capabilities are unreal for such a small flashlight. One of the downsides at the moment is the hefty price tag. But the quality, ease of use, and accessories make the Fenix TK30 a great tactical thrower. Right now I can’t give it anything lower than 5 stars. Except for maybe the price tag. But all LEP flashlights are still pricey.

Get *20% off at Fenixlighting with 1Lumen’s unique discount code for: 1LUMEN20

(*Code can only be used once per customer)