The battle of the single 18650 flashlights

Hi everyone! Have you ever wondered how sturdy and durable is your flashlight? If not, no problem. I will check it for you anyway. I will be dropping them, sinking in my fish tank, hammering them and more. Enjoy!

Let’s see what they look like before all the tests.

Build Quality before the test

So we have 3 similarly looking flashlights:

It came in a very nice cardboard box, well secured. The flashlight itself has an SS bezel and looks very premium. It costs twice as much as the other 2 competitors.

Came in a common (for Convoy), simple thin cardboard box and a bubble wrap. The flashlight itself feels well made and durable. It is the heaviest out of the bunch, also the most durable?

It came in the same box as the Convoy. Generally, it looks very similar to Convoy, with a bit deeper knurling.

I think it will be a close battle between Convoy and Xanes. OTR, although it is the most expensive, I think it will perform the worst. It is my guess, I don’t know the results yet. We’ll see.

What scratches our flashlights the most? Keys, of course.

To be more realistic, we’ll use more keys

And other random stuff you may sometimes have in your pocket

I’ve built this scratching machine (spinning can). I will test flashlights one by one, 2 hours for each one.

Now I will scratch the lenses with my pointy carbon steel Mora knife.

Well, this knife is very sharp and pointy, I was scratching with moderate force, but lenses look almost untouched, with only small, hard to see scratches. All flashlight’s lenses performed the same. You can see some scratches on Convoy’s lens, but all flashlights have the same scratches.

Conclusion: You’d also look stupid when you asked for 40 redundant keys in your local shop.

Have you ever been afraid of leaving your flashlight for a night in very cold conditions? I was. For this, I have a 14 hour, -25°C (-13°F) test in the refrigerator. All flashlights are in a closed plastic box, with some water (just 1-2 spoons, to imitate night moisture). With batteries, but turned off.

All flashlights are working fine, and the battery voltage remained the same.
*relief*
Now I know I can safely leave a flashlight outside during the night when sleeping in a forest (as I did before, but now at least I know it is safe)

All flashlights are working fine, but rubber switches in Convoy and Xanes make that creaking noise when pressing. Annoying. OTR doesn’t have this problem – good, because they advertise to have a good quality switch.

Conclusion: I need to control the temperature better.

Now it’s time for an obvious must-be: waterproof test. But I should call it “waterproof+ test”. 48 hours in my fish tank, at a depth of 25 cm. With battery on, turned on. If not cold and hot, maybe just water will kill them. I’m guessing: Xanes will perform the best.
Let’s find out!

Results? I am a bit surprised because none of the flashlights leaked. Not even a tiny bit. The reason is probably that they were submerged in shallow water, even they were submerged for a very long time. Maybe they need more water pressure? Let’s move to Waterproof test stage 2: touchless car wash and a pressure washer. 30 sec. spraying from close (10cm) distance.

I found no water inside. However,  after approximately 2 hours I decided to turn them on and noticed some moisture behind the lens of the OTR M900’s lens. The OTR was the only flashlight that leaked. I am not sure when that actually happened: after the 48h immersion or during the pressure washer test. Anyway, this amount of water is not a big deal for these flashlights at all, considering all the tests I’ve done.

Conclusion Test 4: You can use any of these flashlights to lighten your fish tank for at least 48 hours.

With battery inside, turned on.

Flashlights don’t look good after 30 drops from 1m height, especially a bezel and a tailcap.

After a total of 45 drops they look even worse.

The OTR M900 turned off at the 7th drop from 2 meters. This was the second side-drop from the drop-test. Unscrewing and screwing the head back on helped, but it was still a single-brightness flashlight. The lanyard holes in OTR were annihilated as well. The Xanes XT02 started to show a problem with its threads. The Convoy flashlight was still screwing pretty well, as usual.
Apart from the obvious UI problems of the OTR, it still looked the best from all 3. The front of the flashlight looks almost untouched, thanks to the stainless steel bezel. A SS bezel really helps, as you can see. The tailcap doesn’t look that bad either, much better than the other 2.

Conclusion: If you need a single-mode OTR M900, simply drop it several times.

A river drop test. I remembered from a while back that I once walked near a river and dropped my flashlight. That was a $70 flashlight with a IPX8 waterproofness. It stopped working after this happened because water got inside and damaged the light. For this test I’d like to do the following: turn the flashlight on at max brightness and drop it into the river from about a ~ 3 m height. A nice hot flashlight into a cold river (10°C or 50°F). What could possibly go wrong?

Well, nothing really happened at all. None of them leaked or stopped working.

Conclusion: The $70 IPX8 “military” flashlight I once dropped in the river really was a waste of money.

With this test, I will see if the flashlights keep working when I insert the battery the wrong way. Let’s see what happens if I turn them on and leave it for a few minutes. We’ll see what happens.

Conclusion: Nothing bad happened to either of them! Fail!

Just for fun/science. We’ll see which one is the toughest and the most crush resistant. I will do this test without a battery to see exactly how tough the host is.

Nothing happened as well…it seems a car is not a big deal for flashlights. It just means that most of these crash test YouTube videos have no meaning. Even a $10 has no problem surviving.

The final test. Well, if you had this size of a hammer, you’d probably want to do it too, right?
It’s about 5KG (11 pounds)

The flashlight will be set vertically, on the tailcap, and I will drop this hammer from exactly a 150cm height.

To show you its weight and impact, I will drop it from a 30cm height on this little rock.

The rock completely crushed. Let’s see what it does to a flashlight.

I think the lens of the OTR M900 broke because there is an SS bezel that touches the lens. It probably transferred the force directly onto the glass lens. The SS bezel is rally sturdy by the way, after our initial 45 drops and even after the hammer drop-test it still looks pretty good.

I’ve done some calculations on the impact, and this level of damage to the flashlights could be achieved by dropping a flashlight (with battery inside) from a height of about 61meters/ 200 feet.

Conclusion: If you are looking for a right-angle Convoy S2+, just use a sledgehammer.

PS. all 3 lights are still working. The only problem is inserting a 18650 battery.. LOL 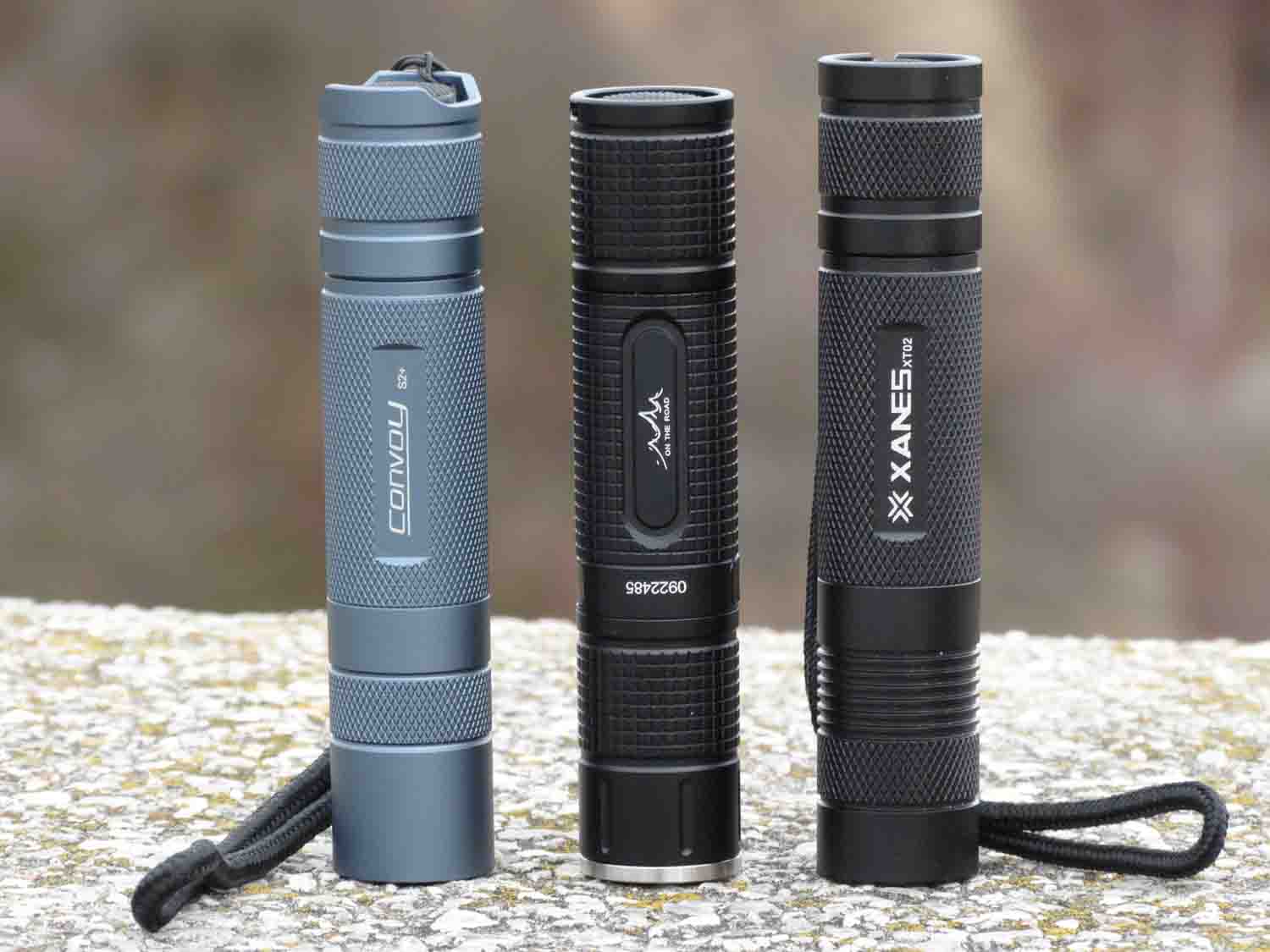 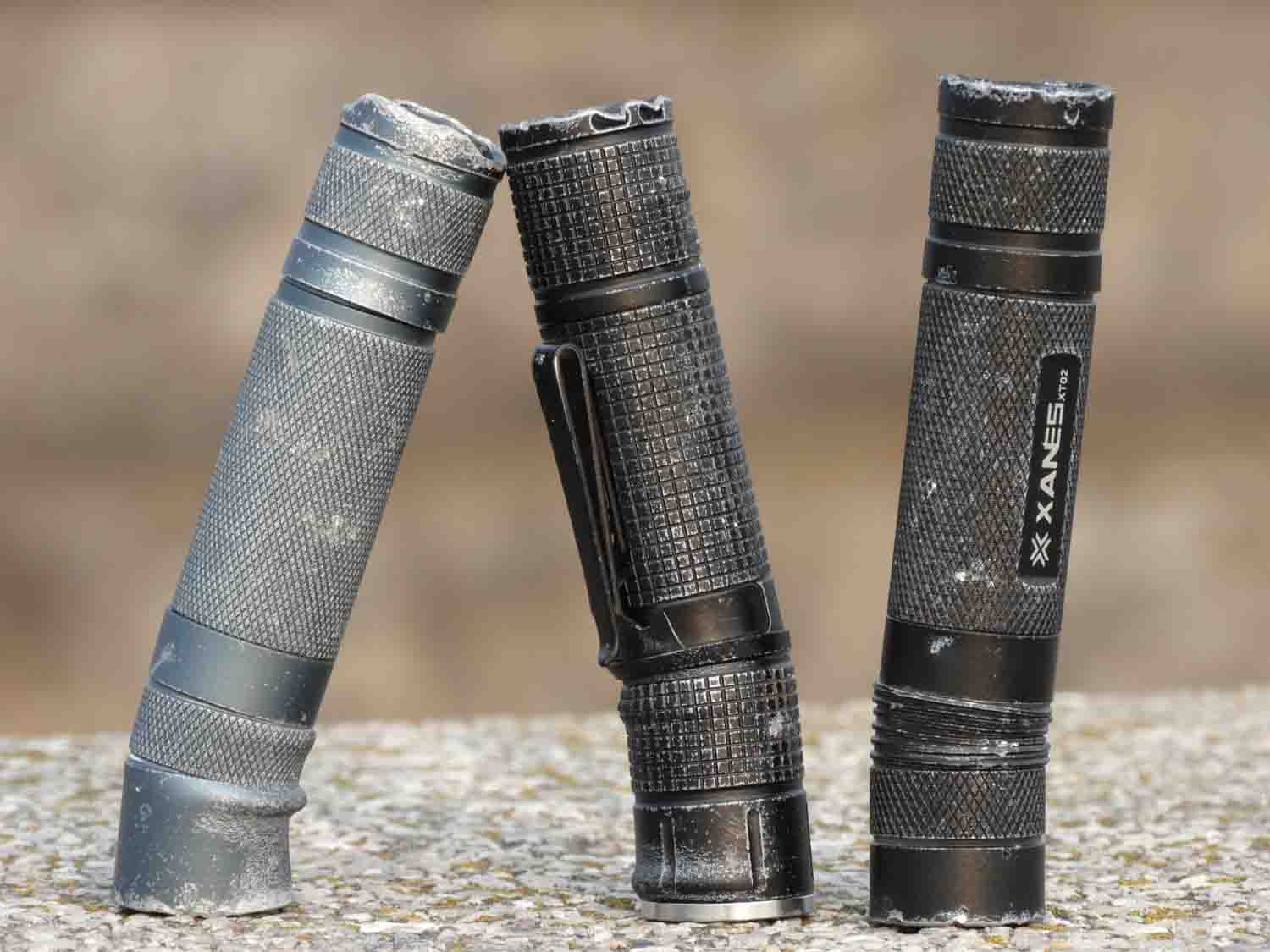 So I have to announce the winner? I think the Xanes flashlight performed the best overall. It is cheap, has been least scratched, looks bad after drop test, but so do all the flashlights, and looks the best after the hammer drop test.
The second place is for Convoy – cheap as well, performed similarly to Xanes, but a bit better in my opinion.
The last place goes to the OTR M900 – it is twice as expensive, and overall performed the worst. The stainless steel bezel was the key for not looking completely terrible. The User Interface doesn’t work properly anymore after drop test, and it also leaked.Thank you for being here, I hope you enjoyed. If so, we are planning to make another destruction review. Tell us which category (e.g. throwers, headlamps) flashlights you’d like me to destroy from.