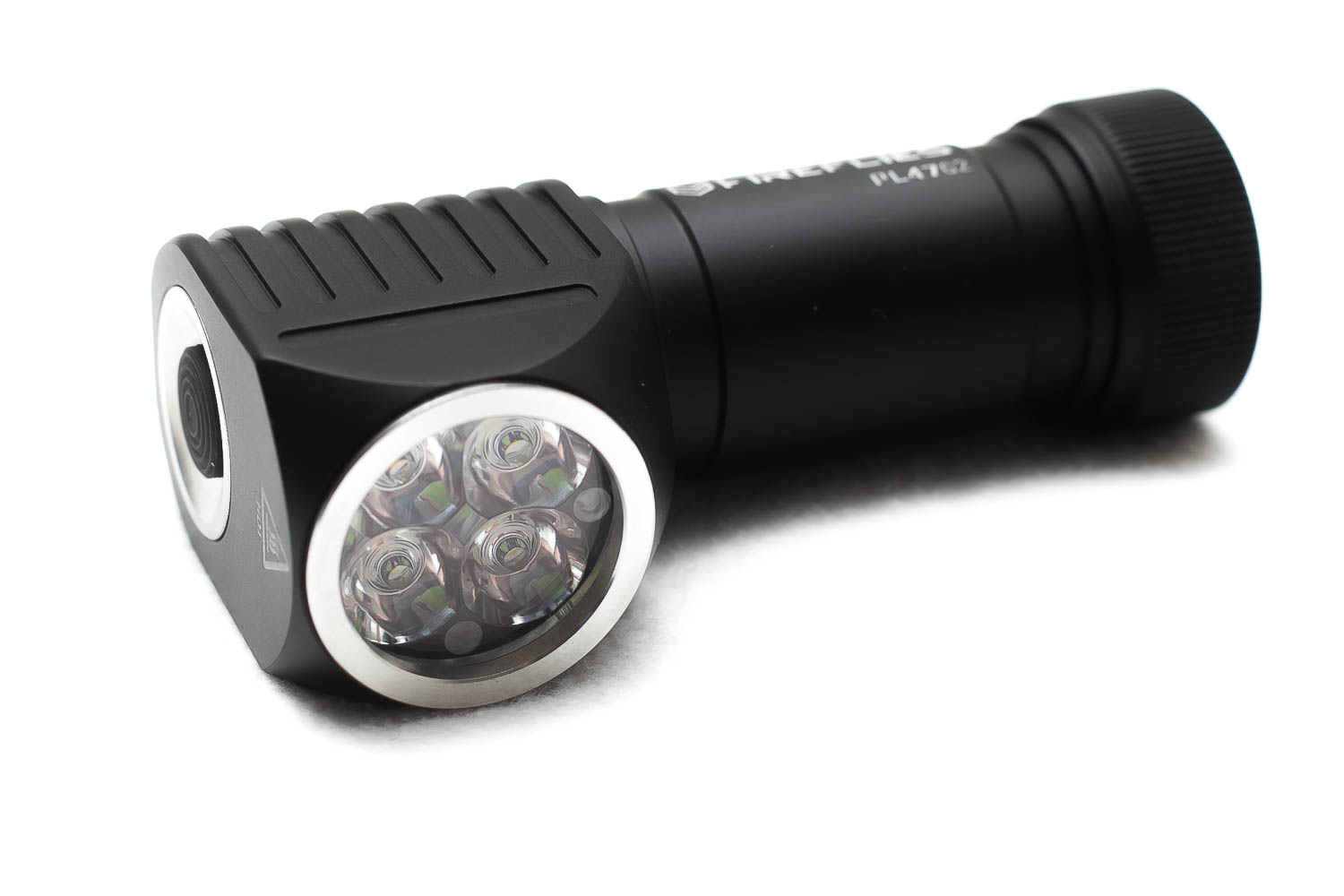 If you follow 1lumen.com for more than a few months you must have heard about Fireflies. If you are new to flashlight this might be a brand name you haven't heard about. FireFlies has become pretty famous because of their great choice of LED emitters. Mainly targeting the flashoholics who care about beam tints.  Please also check out our Fireflies ROT66 and Fireflies ROT66 gen2 reviews.

The PL47g2 is a bright headlamp with the very popular Anduril flashlight firmware (please scroll down to see more information about the UI) and should produce about 4000 Lumens. Let's dive into the review to see how trustworthy those claims are!

FireFlies continues to provide good quality packaging. The only downside is their manual. They still copy them onto normal copy paper. The include quite a nice amout 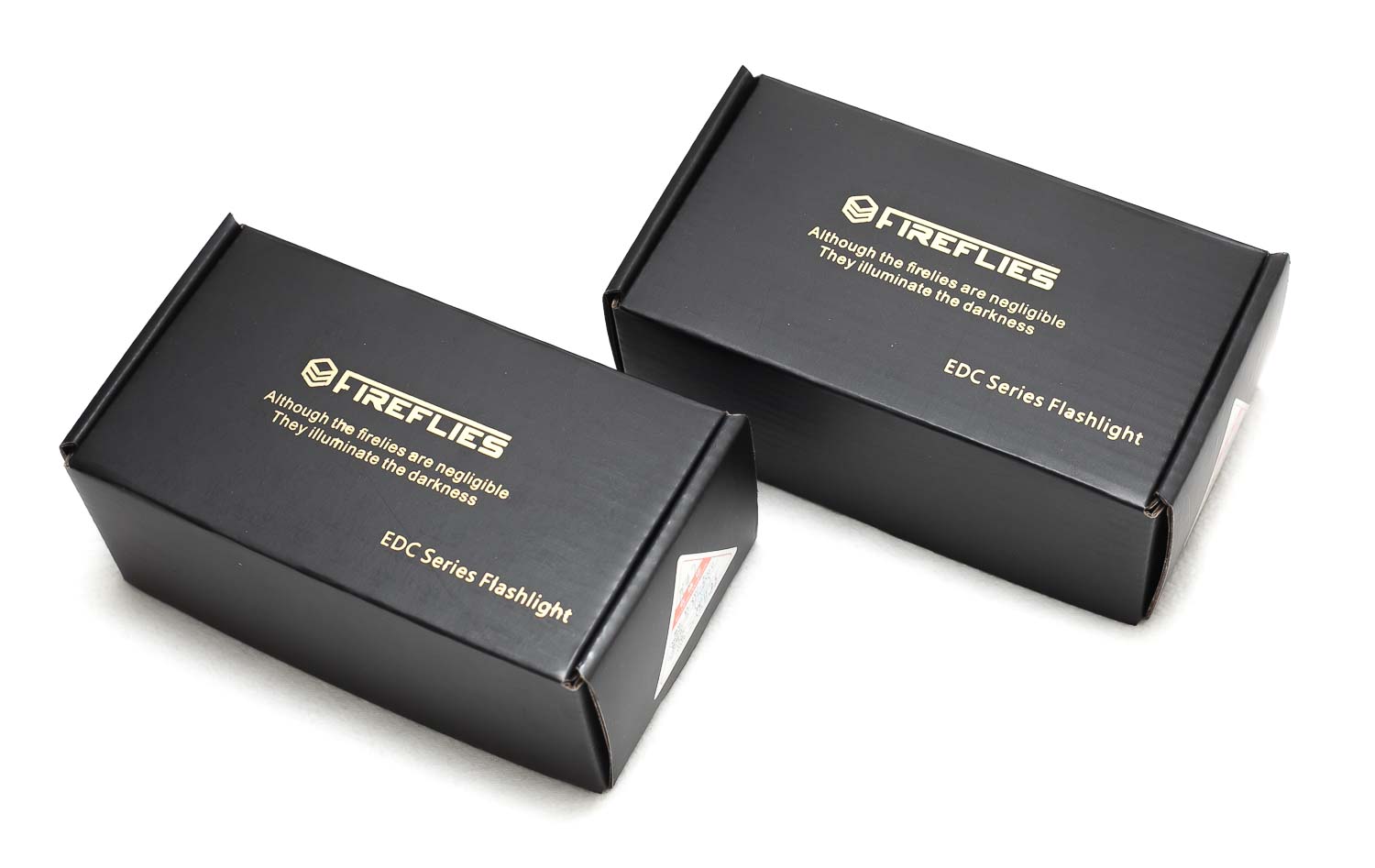 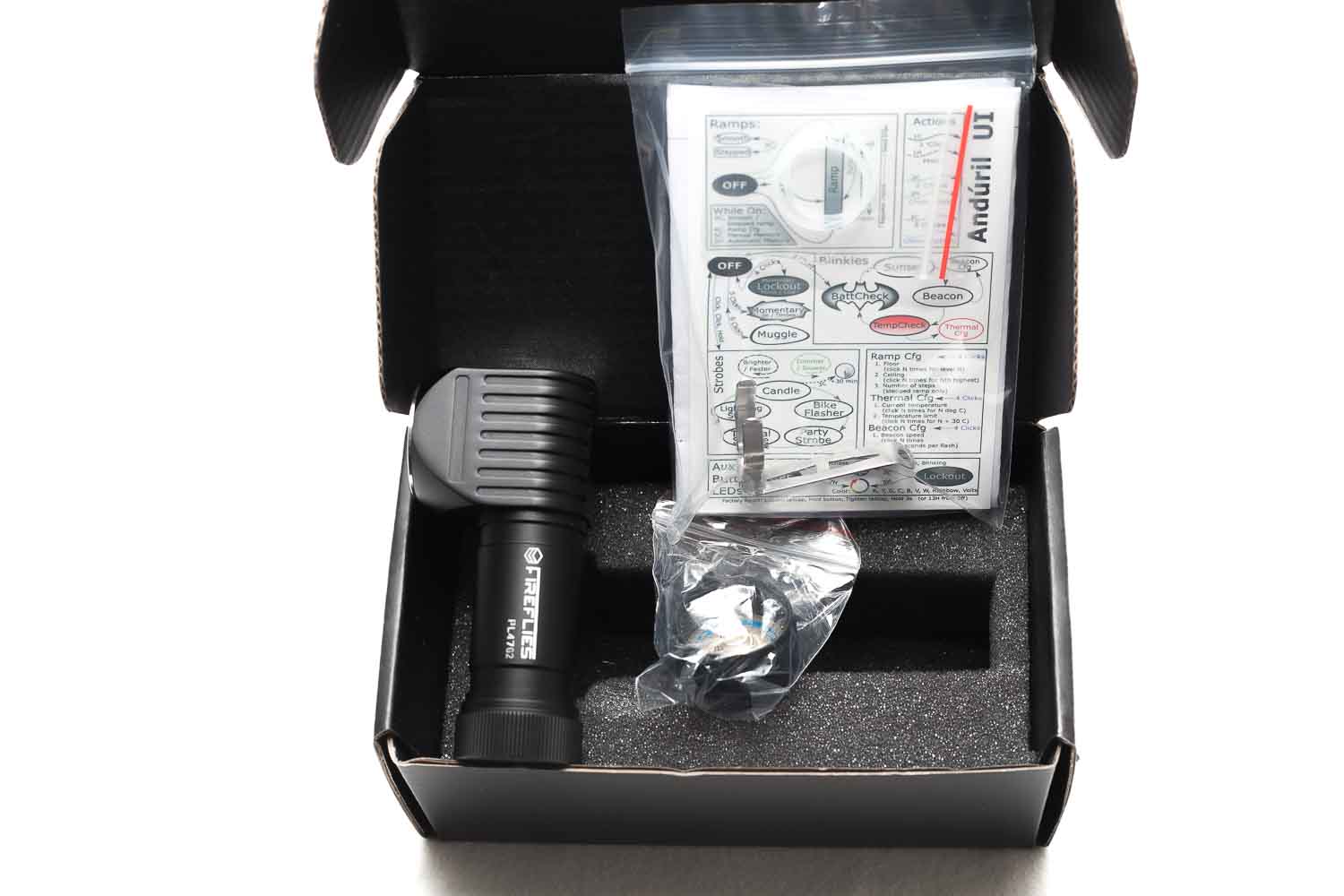 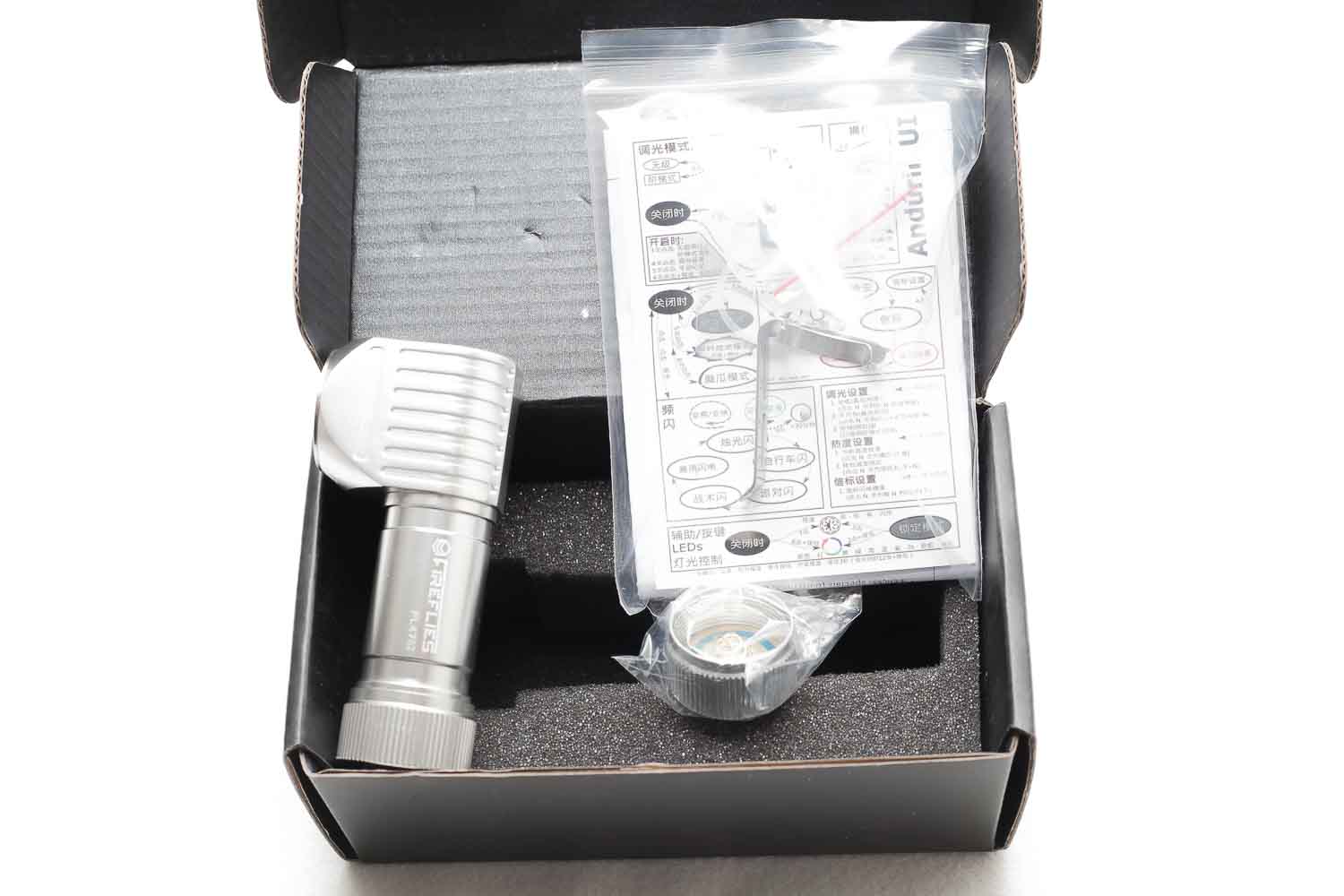 Before we dive into the actually handling of the light, I was interested in knowing why they upgraded the PL47. Fireflies announced in this BLF thread that their first-generation PL47 had some "instability of quality". http://budgetlightforum.com/node/68986 Not so sure what that means, but I just wanted to let you know.

Although you can hold it like a flashlight, it's actually L-shaped. This means that it is great for use as a headlamp. FireFlies included a pocket clip so you can actually attach it to your belt, and light up the road in front of you.

They also included a magnetic tail-cap, so you can not only attach on your forehead, belt clip but also onto metal. I'm actually thinking about switching my Convoy C8 that is currently in my car with this one. In case of an emergency, it can be used in many places and directions. So if you're looking for something multi-functional, this could be a candidate!

The switch is located on top of the head with 2 indicator LEDs beneath the translucent switch cover. It's a typical electronic switch. I would recommend unscrewing the tail cap when storing or carrying it. Because of the flat tail cap, it can tail-stand very properly.

The headband isn't such a success. The rubber rings are very elastic so it's very easy to install the PL47g2, but it's a little on the small side. I don't have a very large head, but the PL47g2 is even in its biggest position still rather small. Keep this in mind when looking for a headlamp! It isn't so much the diameter, but the strap that goes on top of your head is a little too short IMHO. 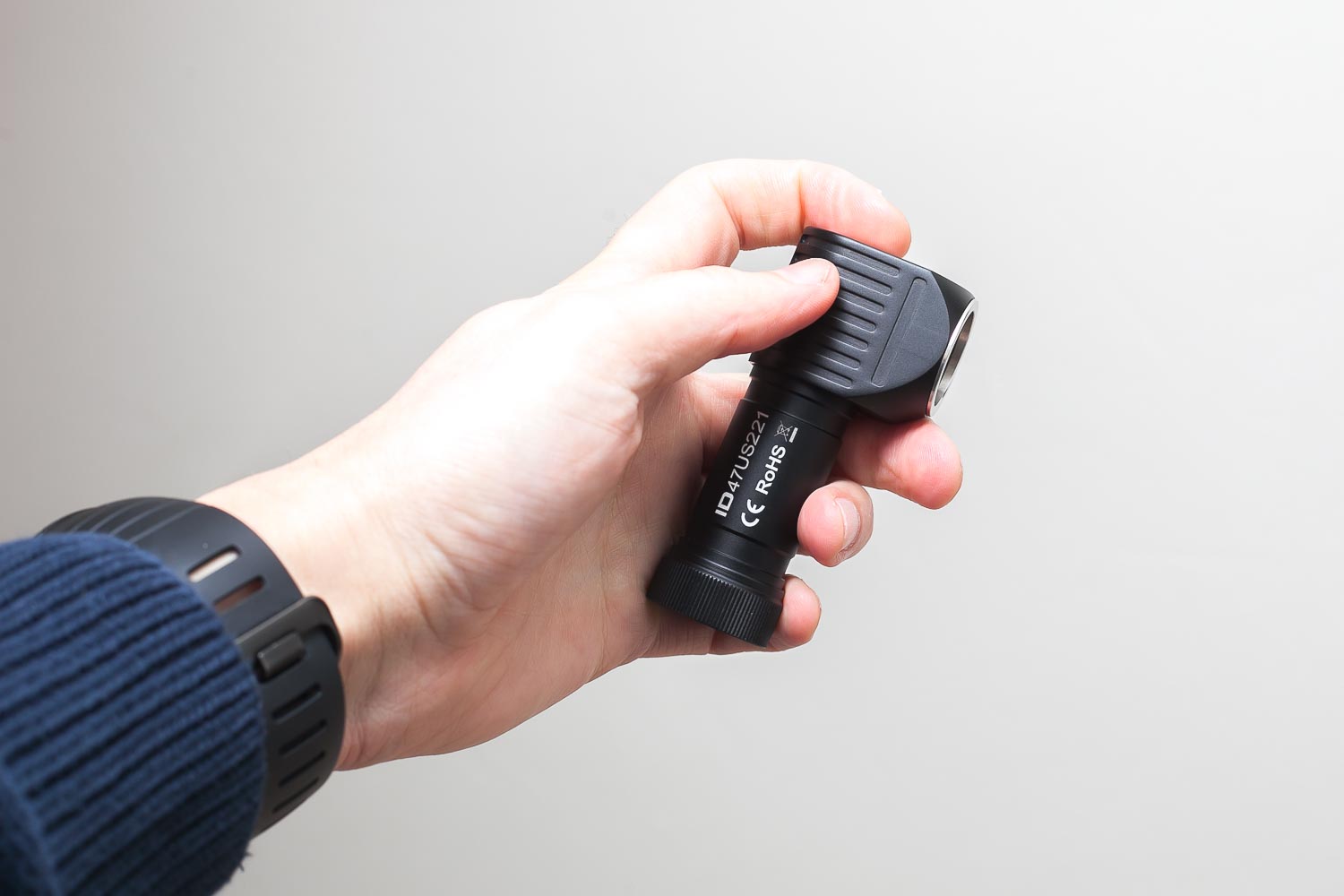 As you may have noticed, the Fireflies PL47 gen2 has no knurling on the battery tube, and the head is also pretty slippery. There must be a reason for it, but it's very slippery to hold, especially with cold hands in winter. I would have preferred more aggressive knurling on the head. If you mainly use it as a headlamp, you don't really need to worry I guess.

The tail-cap has some fine reeding which makes it very easy to open and replace your batteries.

Anodization, on the other hand, is well down across the light. Threads are also done very well without any problems. The stainless steel clip doesn't hold under strong pressure, but that is probably okay? When you play with this, be extremely careful because the anodization will damage when the clip jumps off. 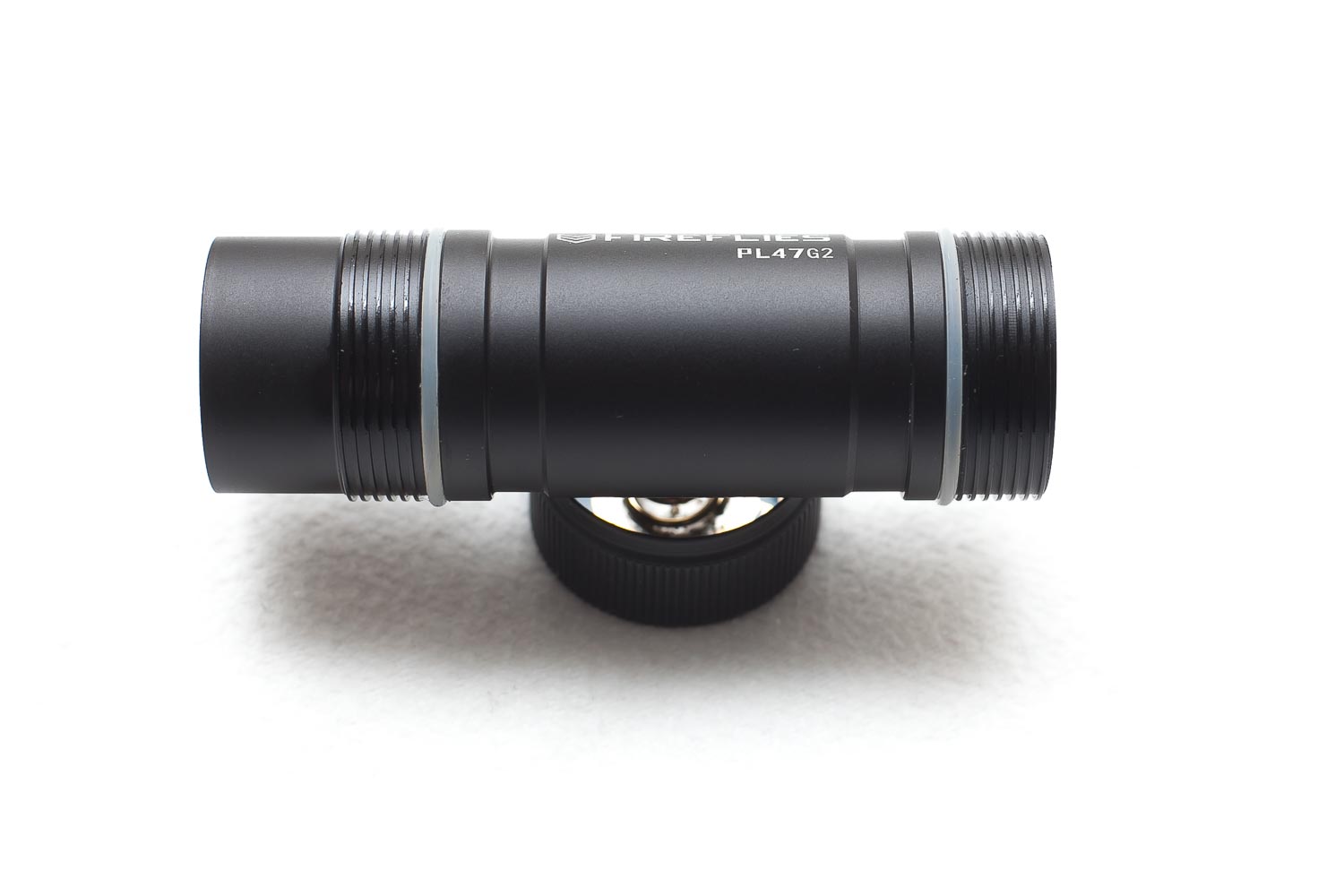 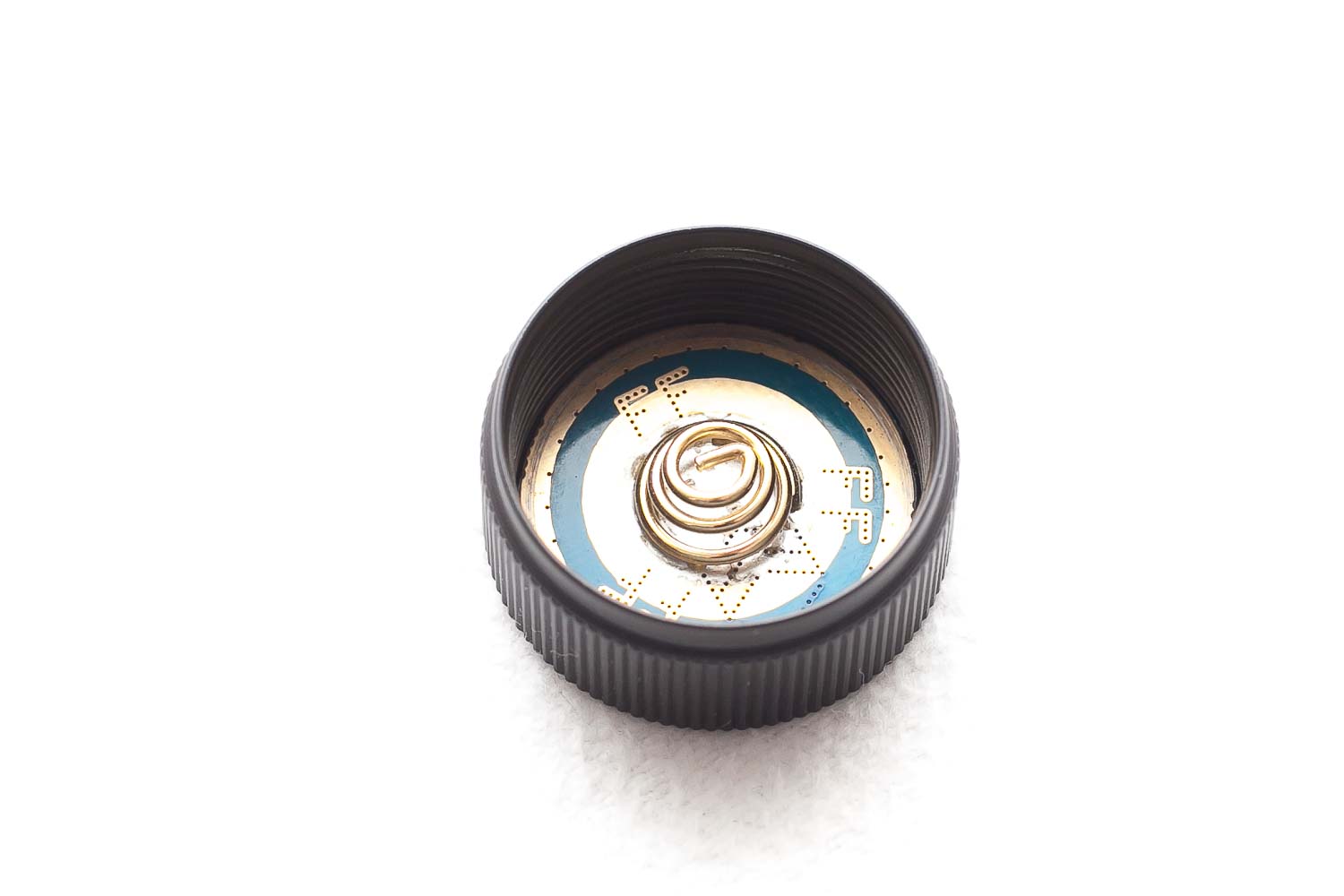 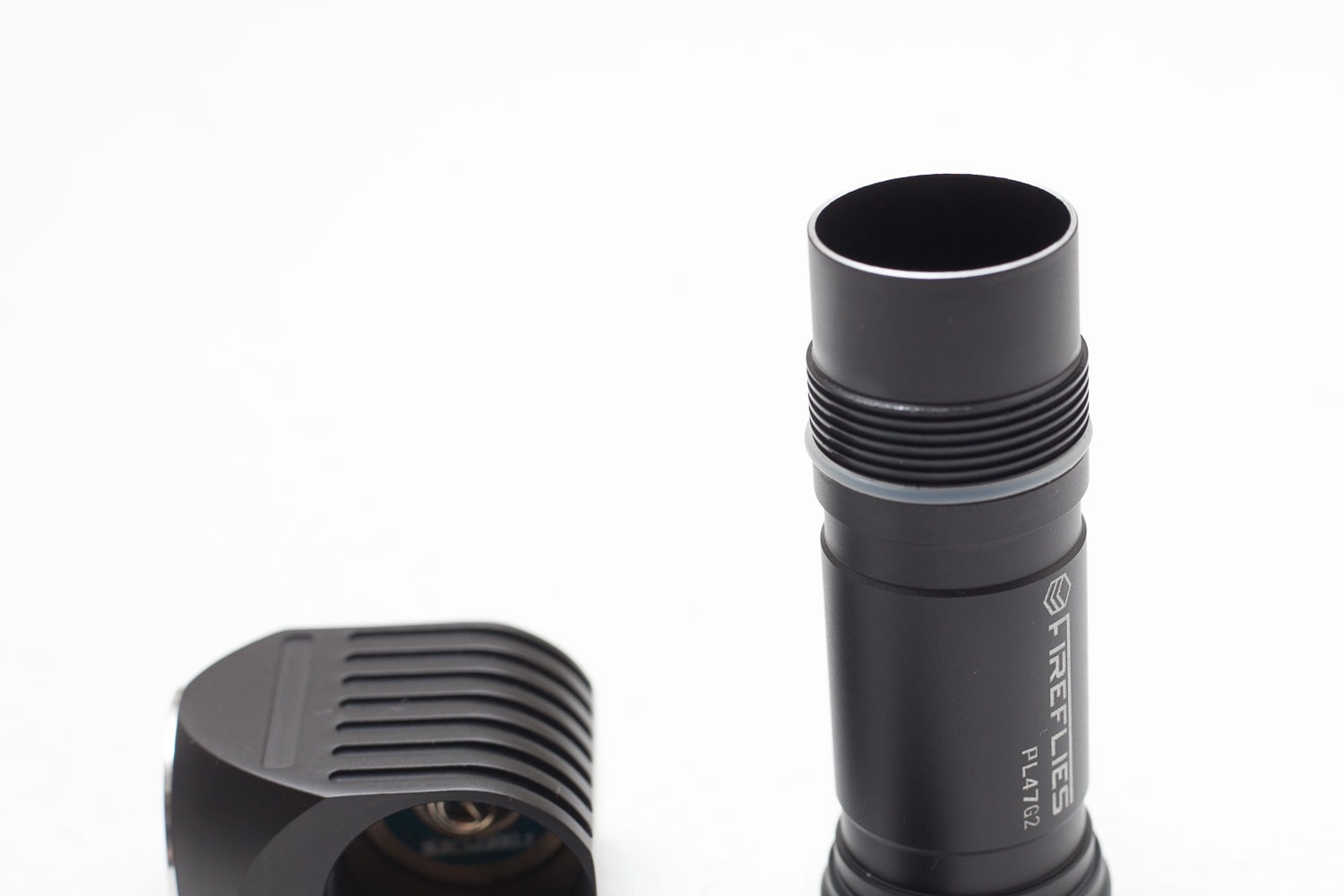 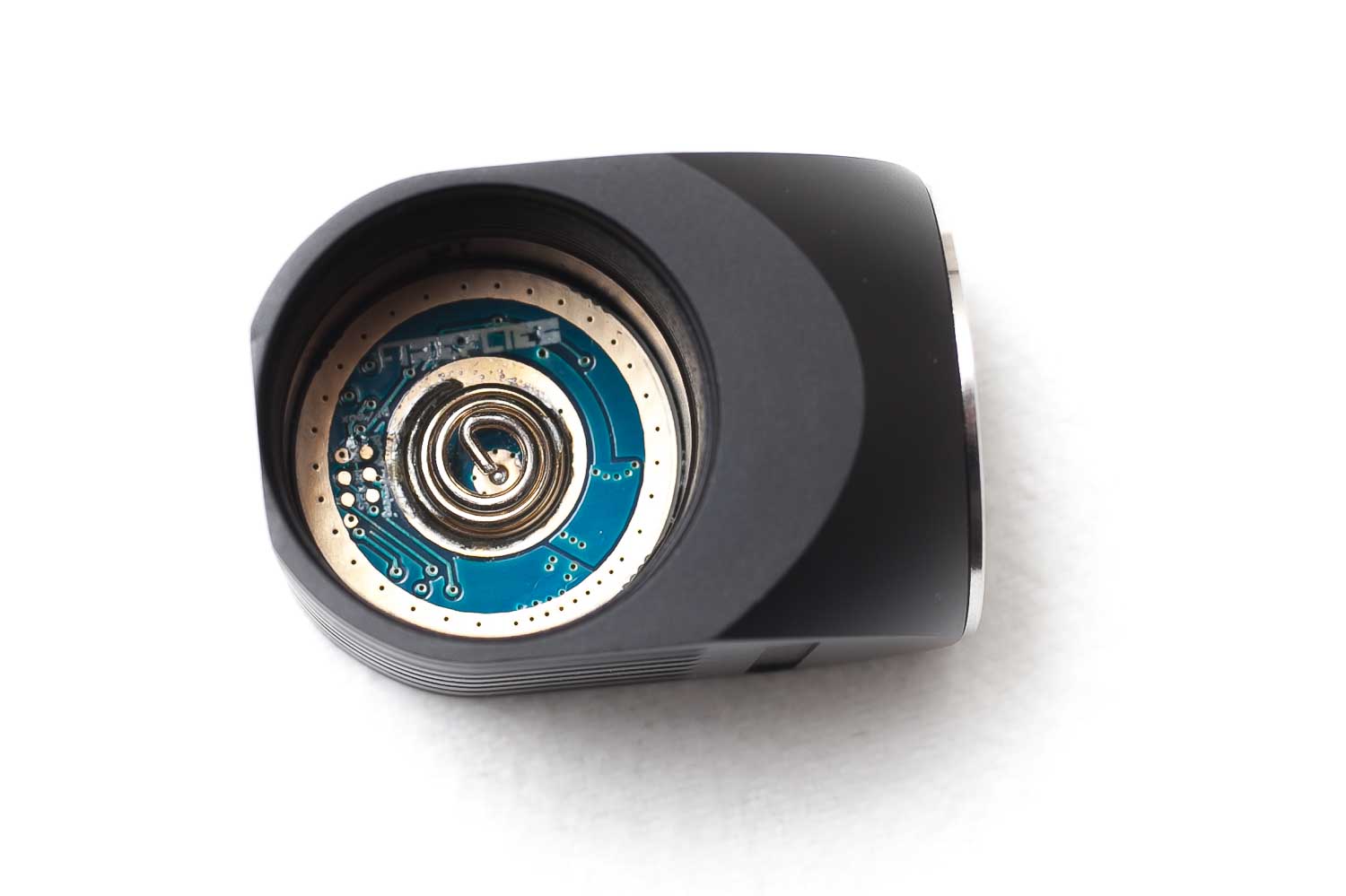 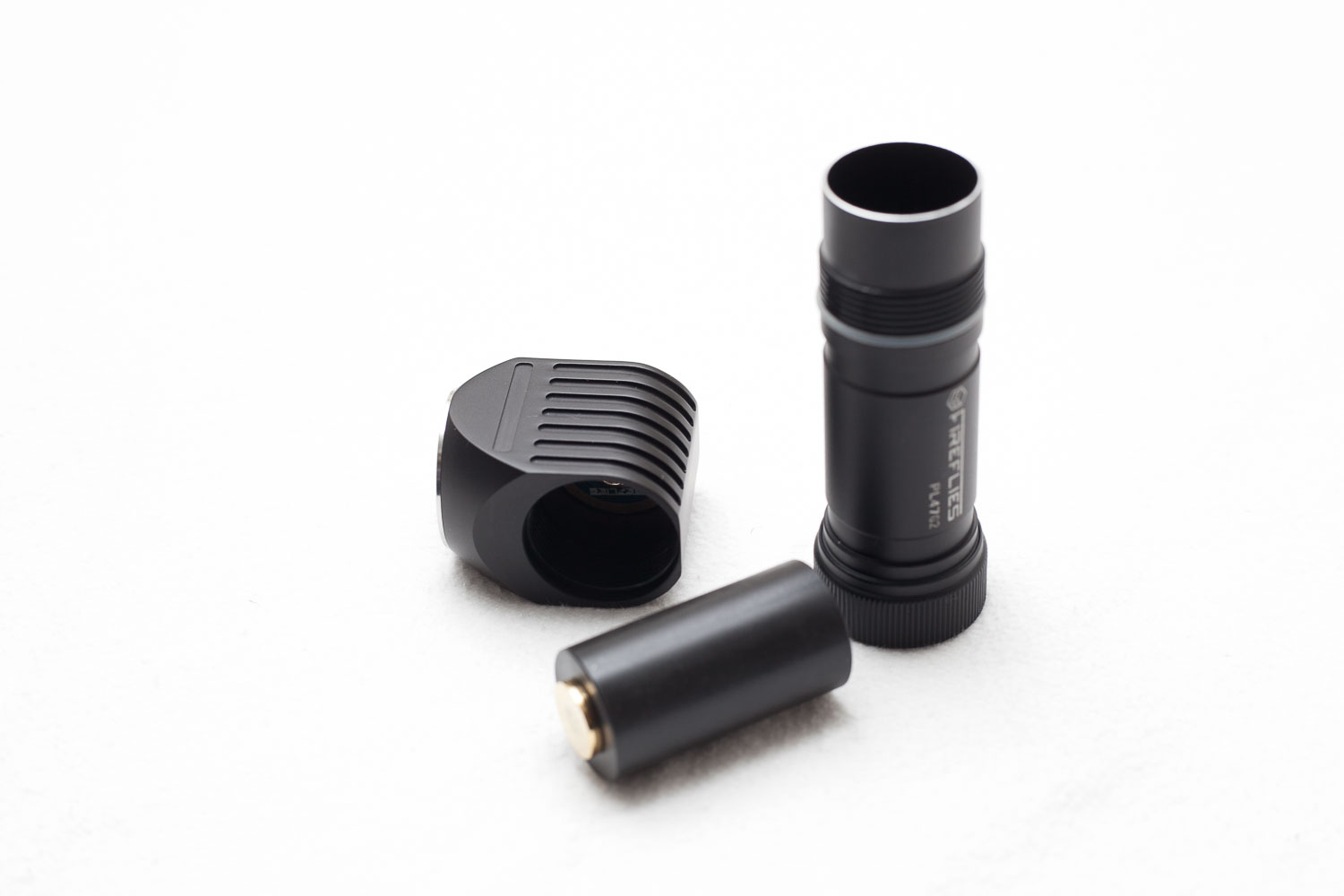 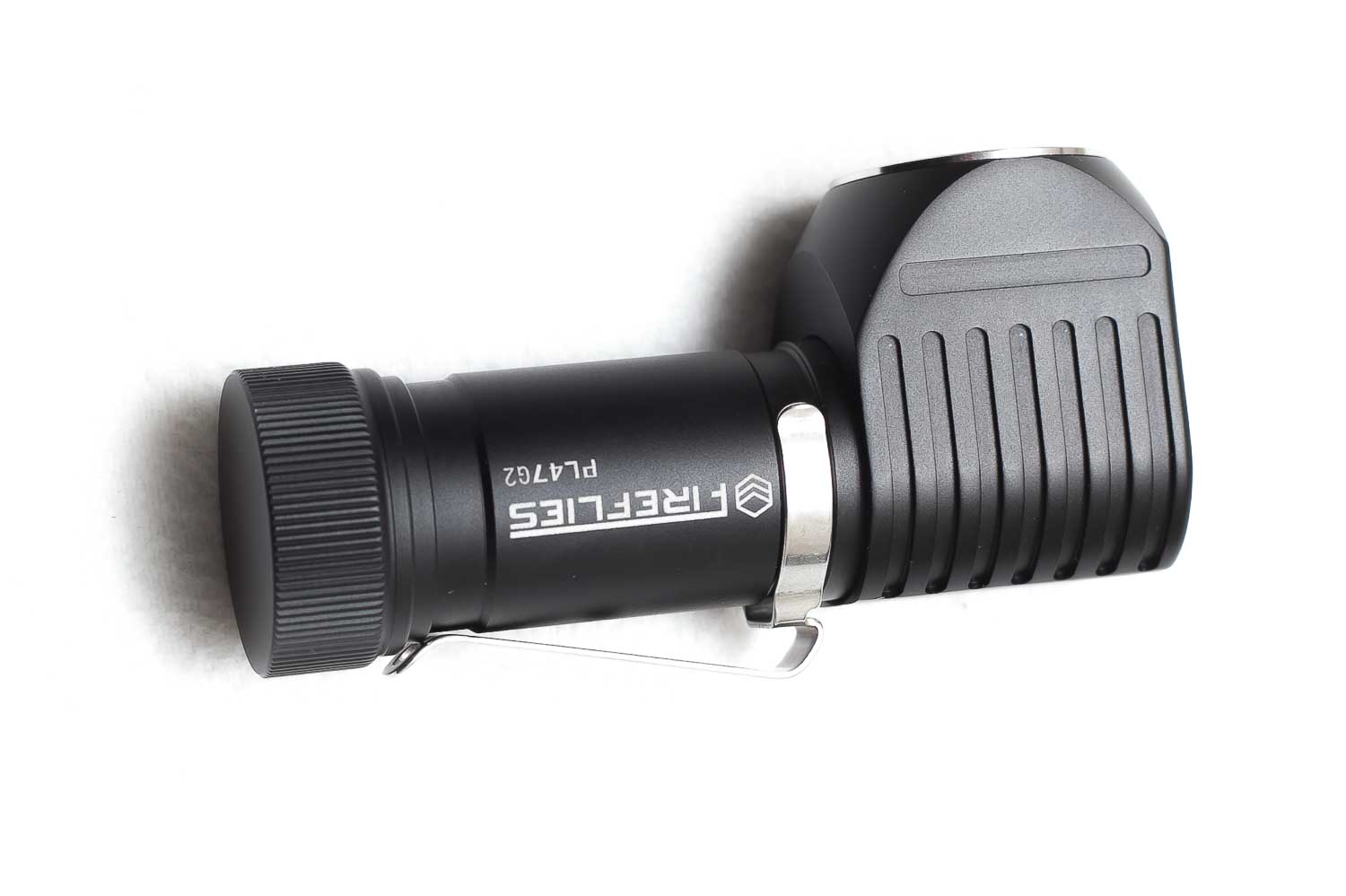 The Fireflies PL47 generation 2 is available in multiple tints.

It depends on what you would like to use it for as well as the kind of tint you like. I personally don't dislike the very powerful XPL Hi 5000K at all, while the SST20 4000K is a little warmer.

The TIR optics have a 10 degrees beam angle, which means that they are more 'throwy' than 'floody'. If you rather have wider TIR optics you should be able to replace them with other ones or buy some DC Fix from Boaz at Budgetlightforum. DC fix spreads the beam very smooth so you have a wider beam as well as softer edges. DC Fix all the way!

The secondary LEDs (AUX LEDs) are on when the light is shut off. They are light-blue colored, and as far as I know, you can't choose the colors while ordering the PL47g2. The AUX LEDs have actually 3 modes,

The bezel is press-fit according to Fireflies, so I'm not going to try to open it up! It's actually made of stainless steel. 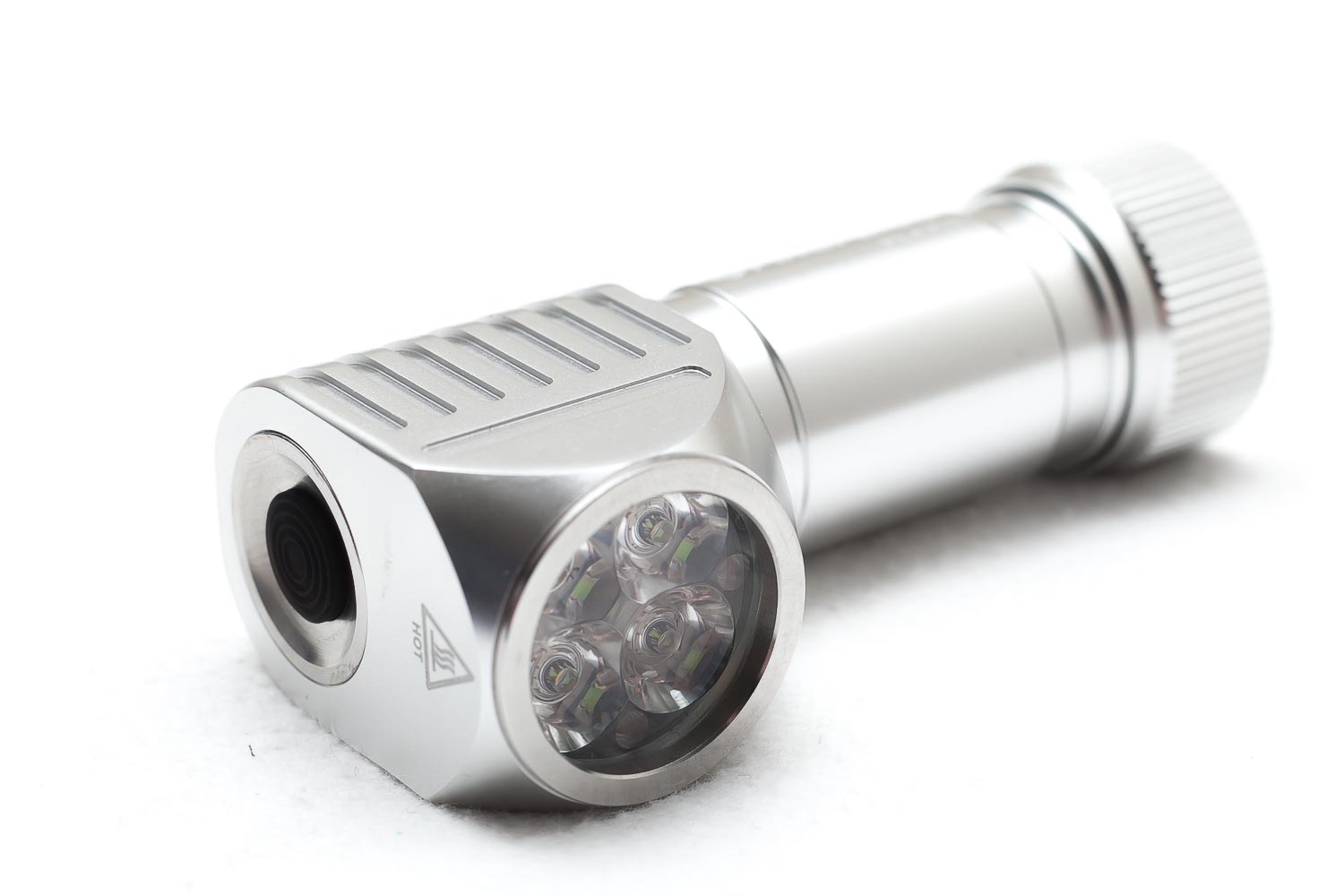 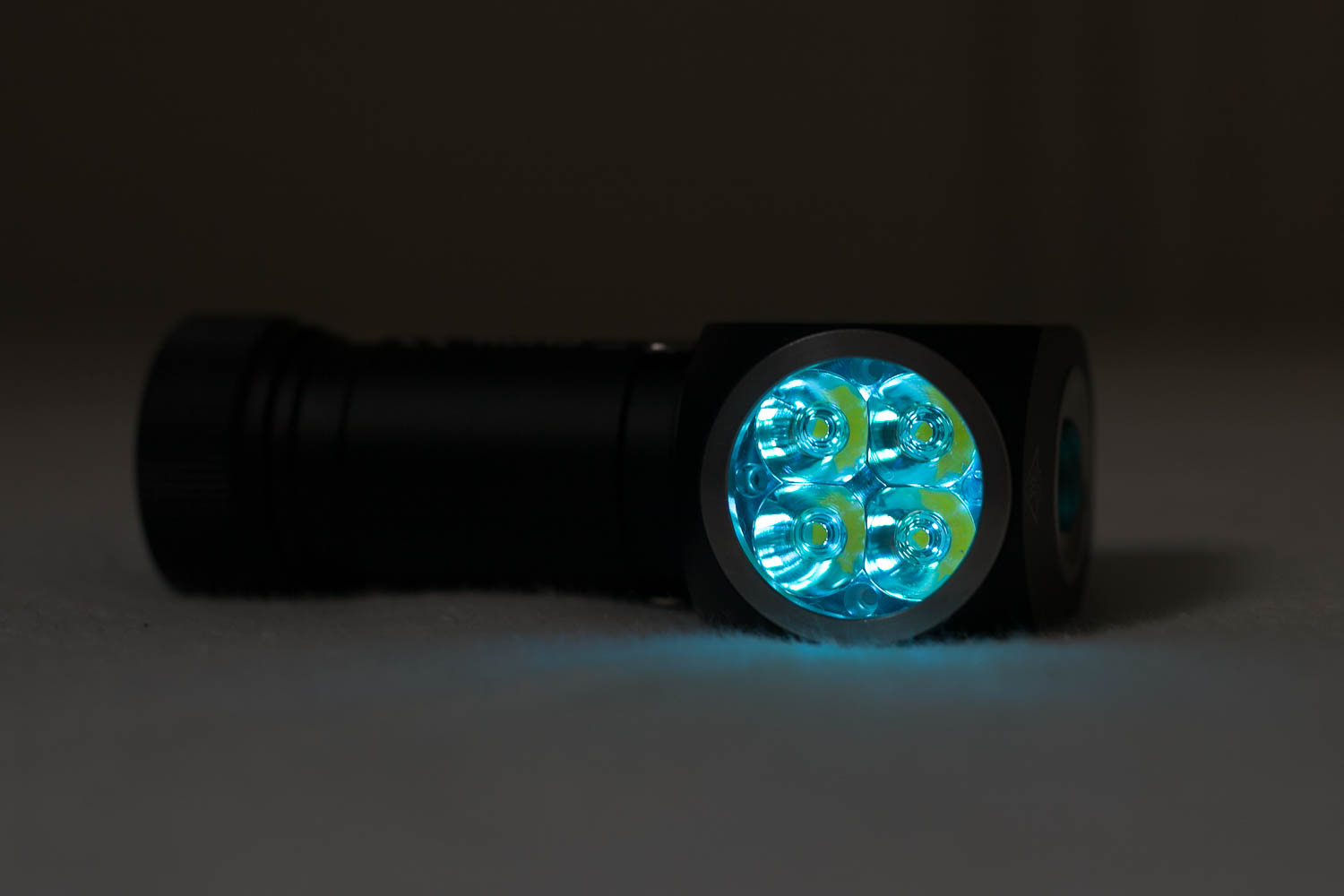 Some size comparison with other EDC flashlights: 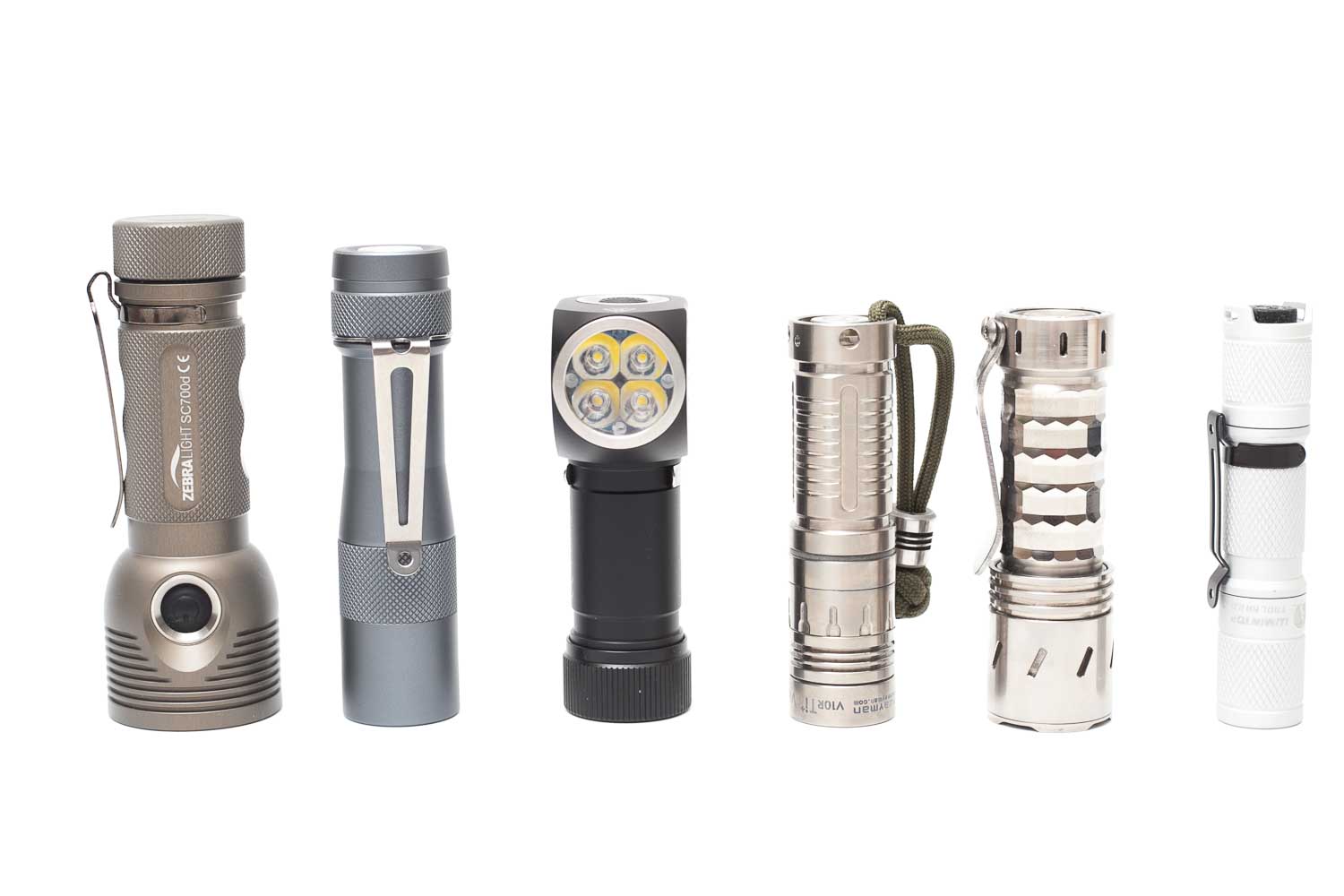 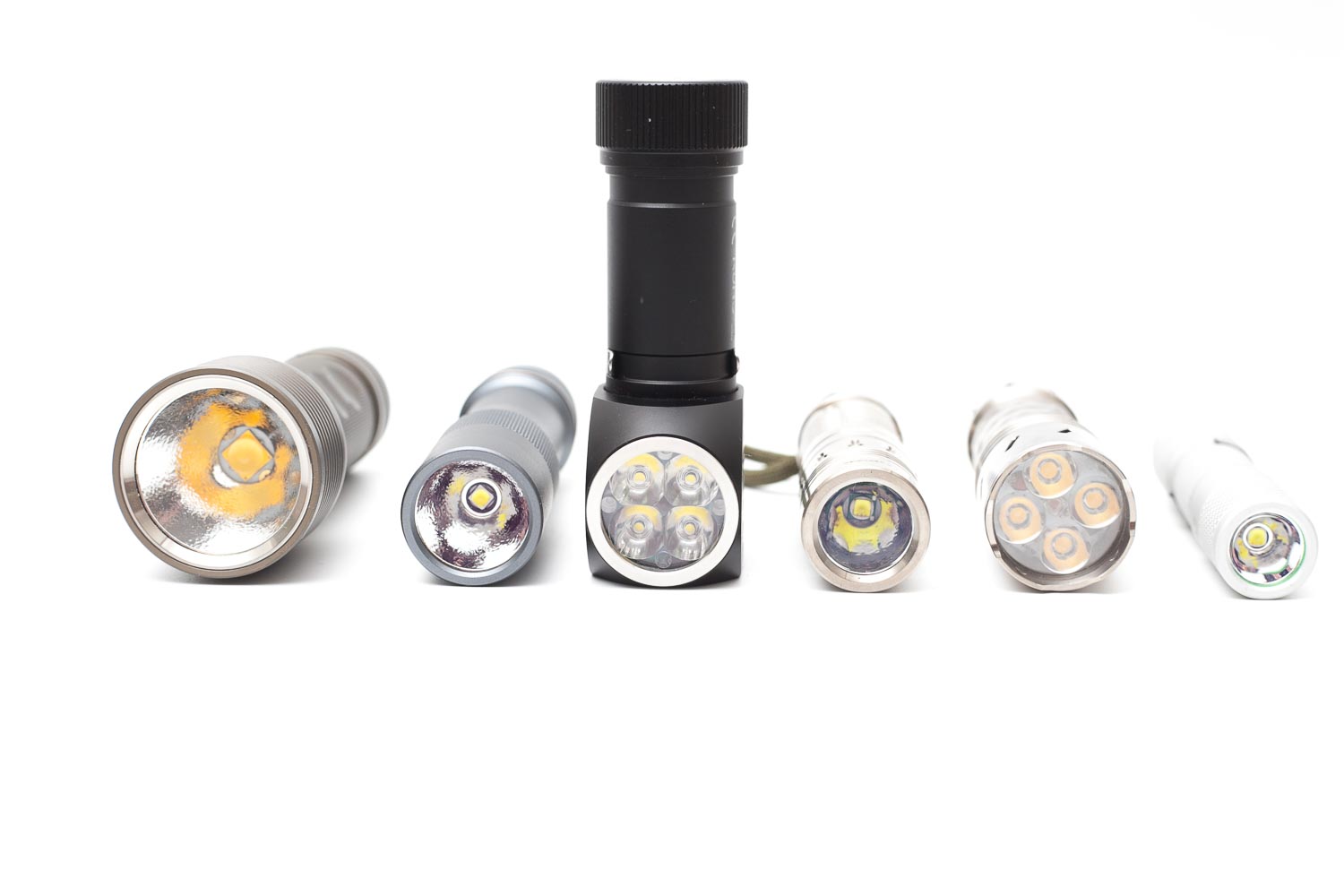 The Fireflies PL47 gen 2 uses a firmware called Anduril. A Budgetlightforum member named Toykeeper wrote the code for the firmware.

By default, it uses a smooth ramping mode. 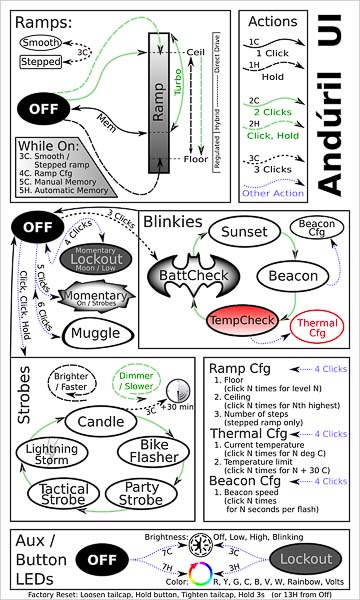 Keep in mind that the AUX LEDs are on by default. (7 clicks from OFF can change the AUX settings from On - Blink - Off)

Enter Special/Fun modes from OFF:

Warning: When the light is ON, please be careful not to do click 4 times and change the ramping configuration mode. This can be annoying if you don't know how to reset it. Fortunately, the newest update of the firmware includes a Factory Reset function!

Read the full manual on how to access and customize these modes. Also, see the firmware picture.

It's great to see Anduril UI being used for so many types of flashlights. The only downside is the UI itself. Since it can be programmed in so many ways, the sellers/manufacturers don't usually set the thermal configuration correctly.
On both of my copies, the were a few degrees off. This resulted in doing 2 consecutive days or runtime tests with strange results. Take a look at the bottom of the page.

FireFlies includes a 18650 battery adapter. Take note that this is only for short, non-protected batteries.

TIP: You can use protected 18650 batteries without the 18650 adapter, without any rattle! 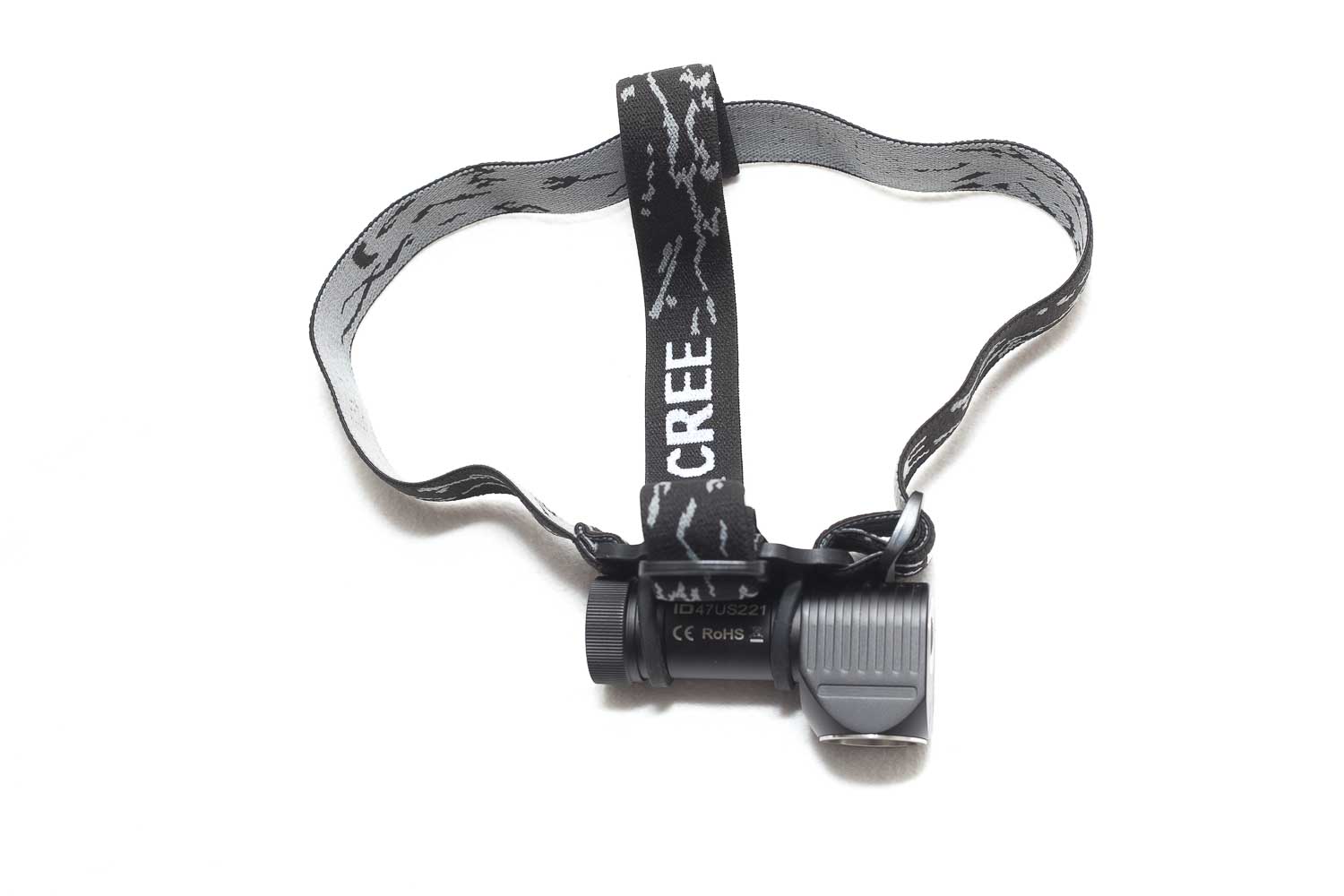 All output numbers are relative for my home-made Integrating Sphere and is now set up with an Extech SDL400 Lux Meter for measurements. For extremely bright flashlights (above 5000 lumens) I am adding a ND filter, either a Kenko PRO1D ND-16 filter, or a Hakuba HG Wide 8x ND filter. The base measurement is done with a Convoy S2+ that has been tested at 137 lumens.

Amps were measured with a Fluke 77III, at the tailcap. Not at the LED! I measured Amps using the 7 steps output mode group. 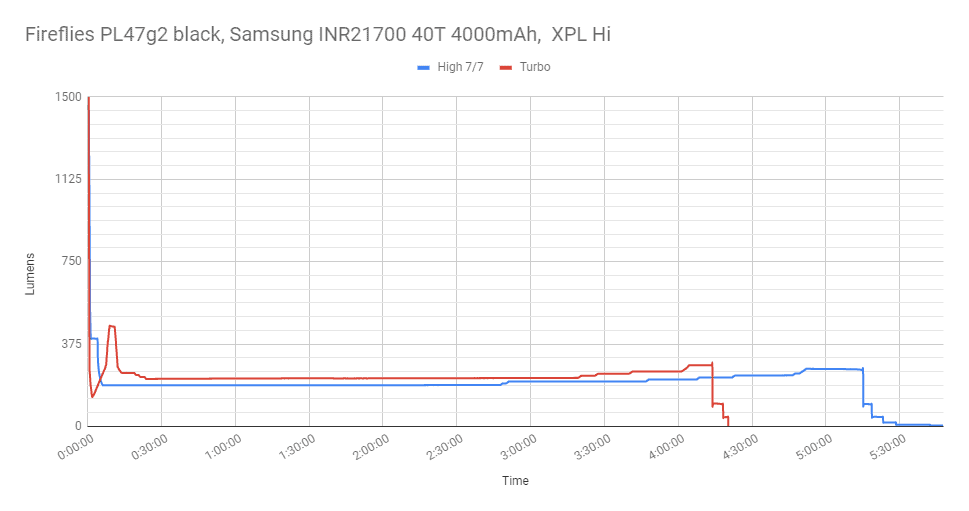 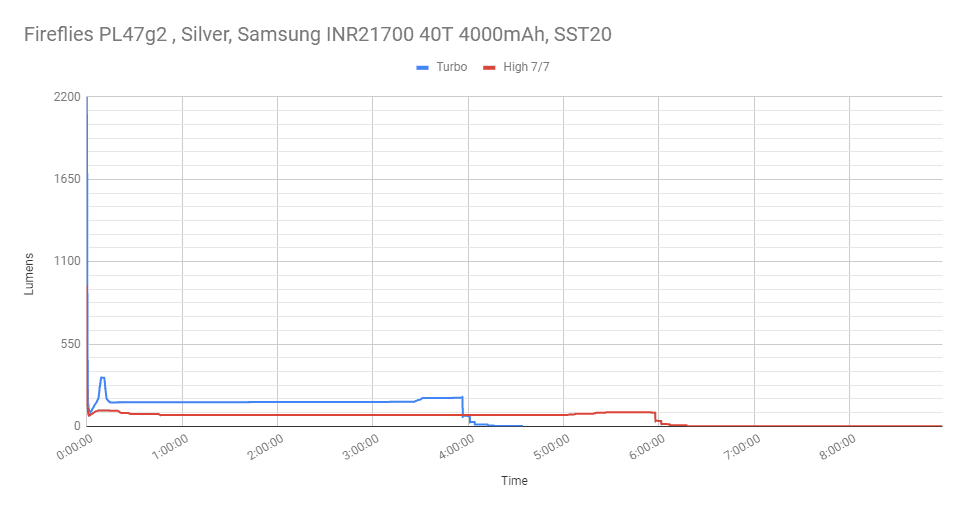 After a few days of testing (2 tests per day) and uploading the data I came to the conclusiong that the Thermal Configuration was way off. The Black one's temperature is more accurate than the Silver one. You can see that the runtime graphs are just plain stupid. The drop very quickly to a very low output. Black drops down to about 200 Lumens, and the Silver one drops to about 166 Lumens on Turbo and about 76 Lumens on High.

I redid the runtime graph after setting the correct Temperature in the firmware.
The runtime graph looks very different now. But a little strange peak can be seen, as well as the increased output towarsd teh end. Especially the spike at the beginning of the runtime looks strange. 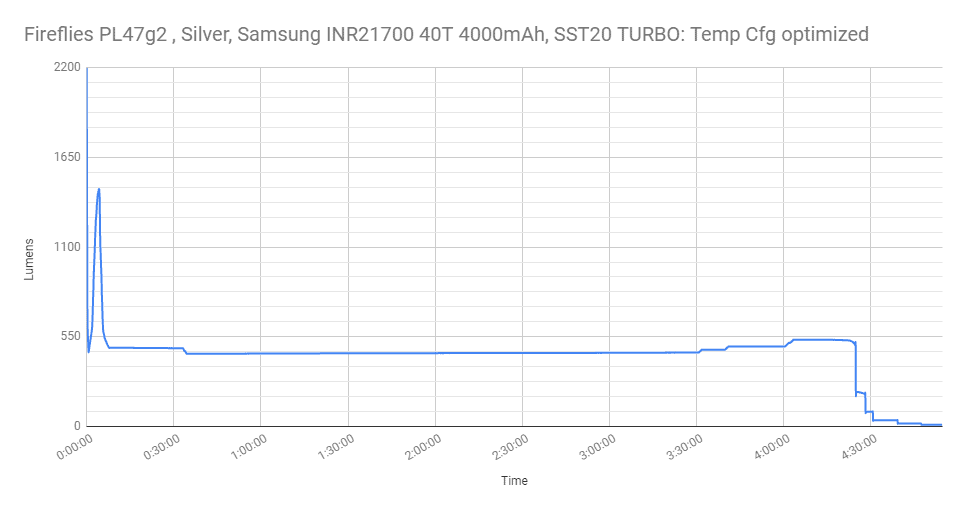 Using the high mode only, I get:

Beamshots were this time taken at start and 30 seconds. Tests were performed with the Lumintop FW3A, Lumintop FW1A and both PL47g2 lights. 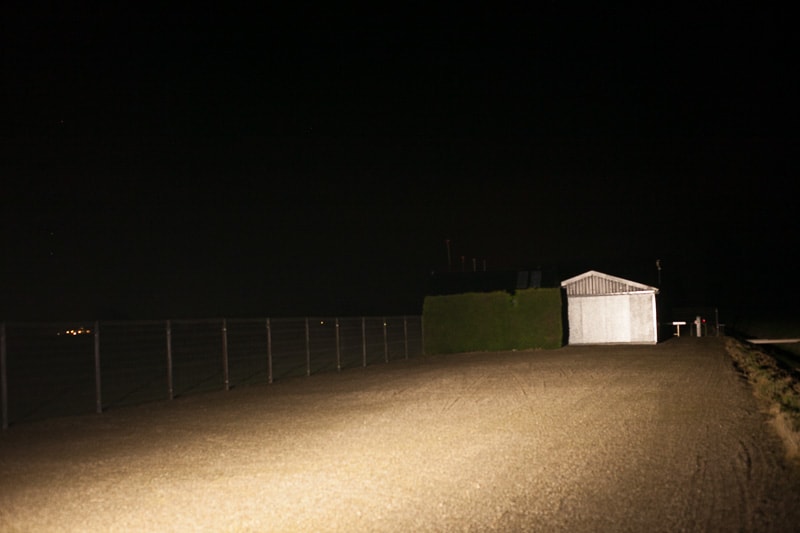 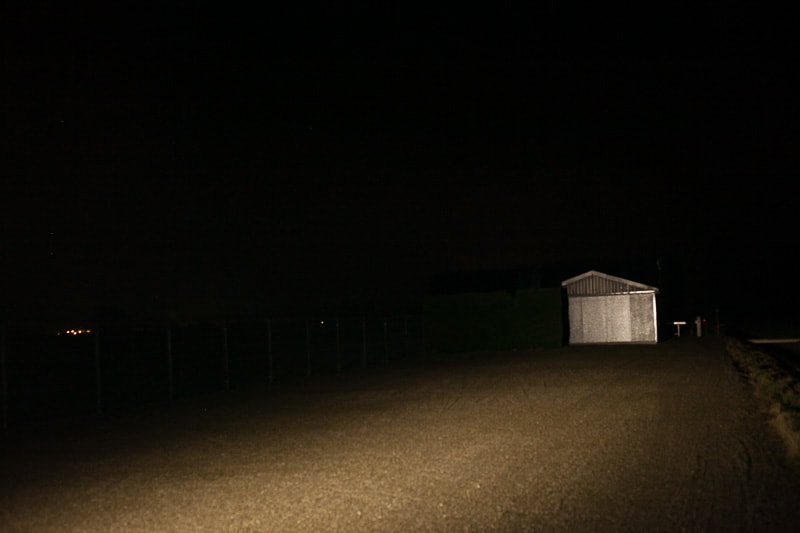 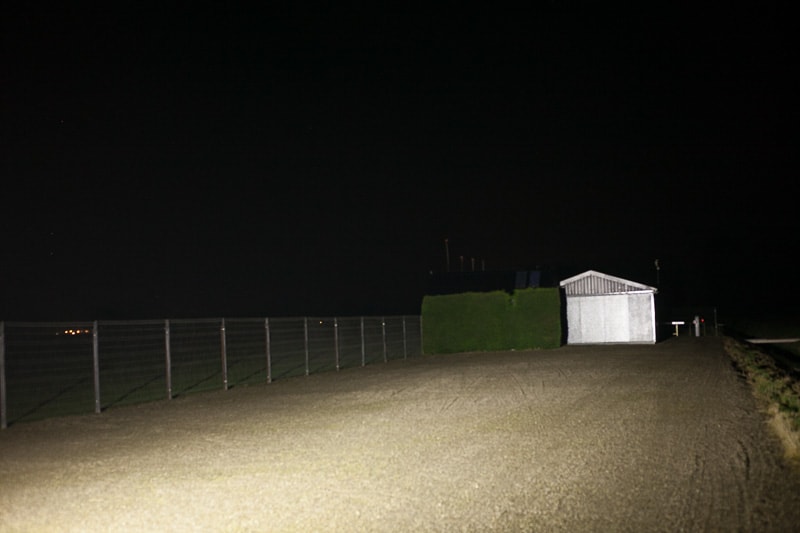 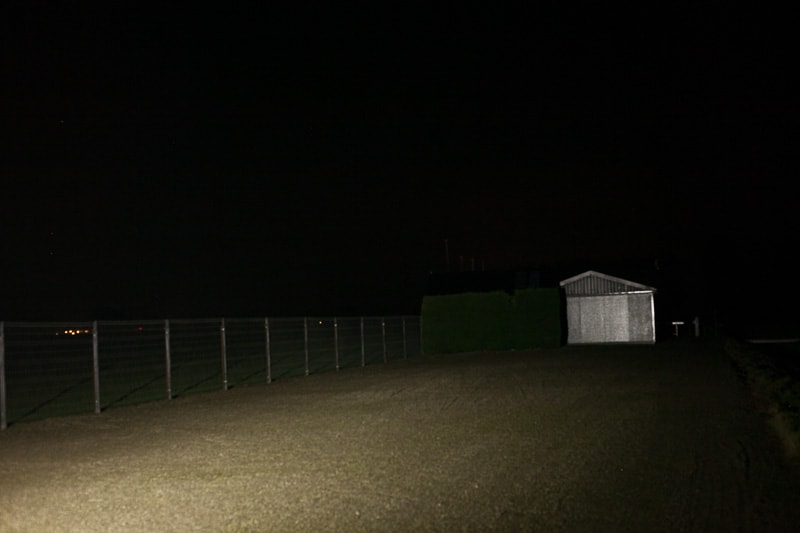 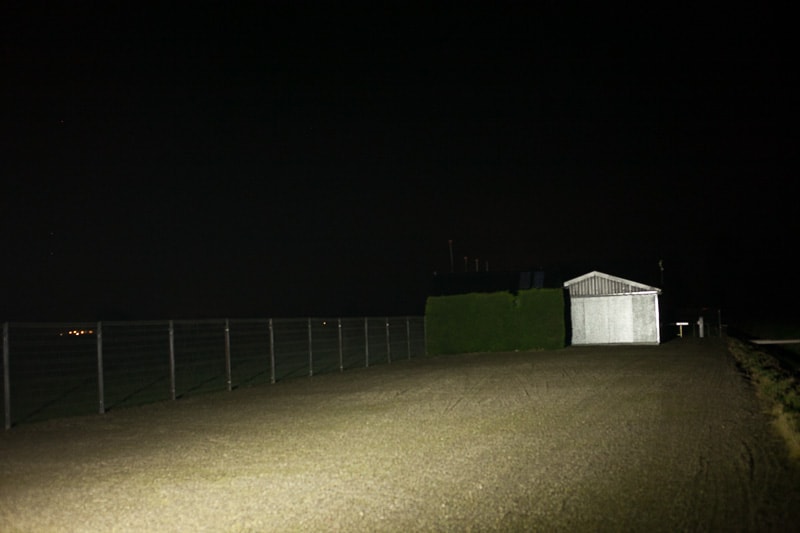 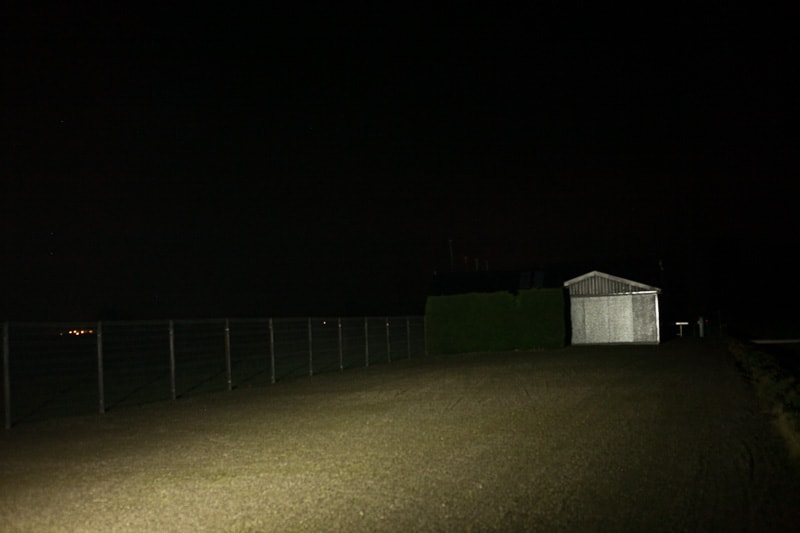 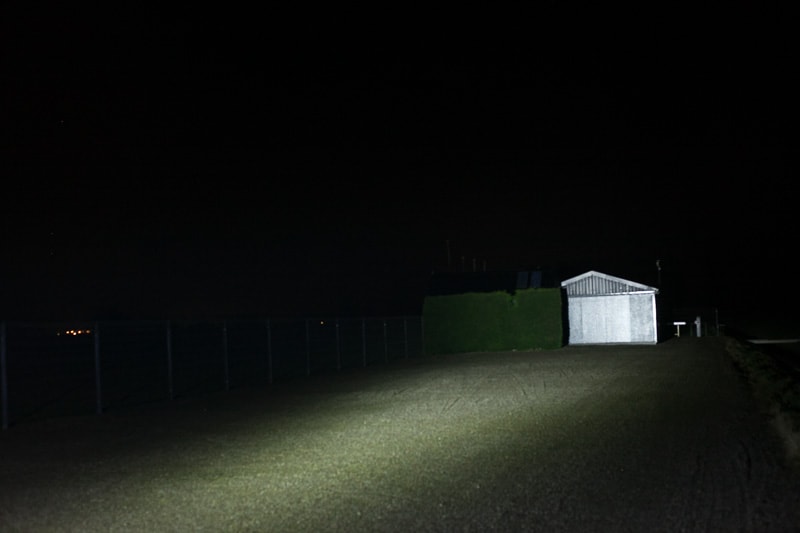 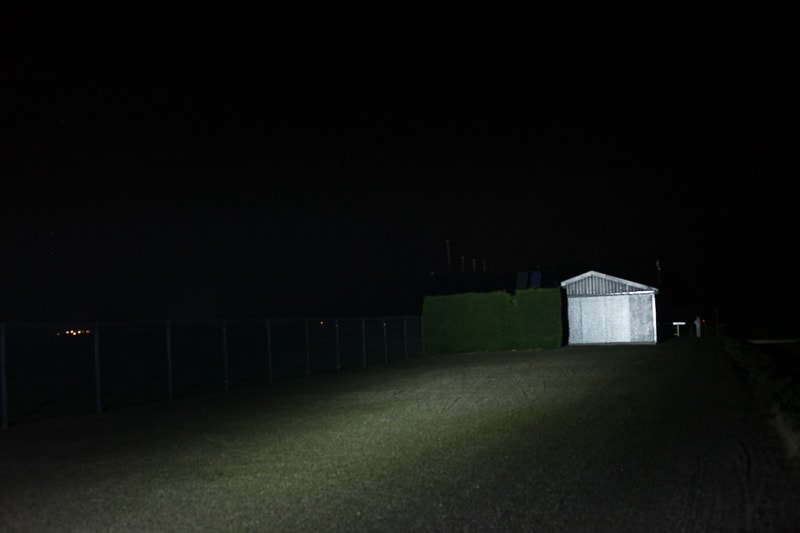 Disclaimer: the flashlights were sent by the manufacturer for review.

The Fireflies PL47g2 is an interesting flashlight with lots to offer. Not only the extremely versatile Anduril UI, which you may like or not, but also the amount of accessories. The clip and magnetic tailcap are great accessories. The headband can be used if you want to use these bad boys as a headlamp. There is really nothing to complain about at this moment (except for the wrong temp configuration, which is just a setting), so I was going to give 5 stars. After the runtime tests I'm not very confident with the output spike, so I'll lower it to 4-stars.