The Best Tactical Flashlights for 2022

CHECK OUT THE BEST FLASHLIGHTS PER CATEGORY:

We are on a mission:

Cut the Crap...
Stop relying on Amazon reviews, top 10 websites, or manufacturer's specs.
We test and review flashlights to separate the wheat from the chaff.

Just in case you might be more interested in very bright lights, check out this detailed list of the current brightest flashlights in the world. And yes, they were all reviewed by our dedicated and competent team. 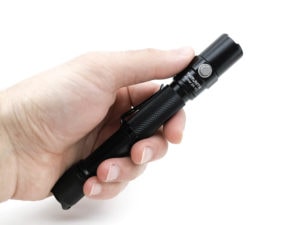 Currently one of the most powerful 2AA tactical flashlights available.

Although the Thrunite Archer 2A v3 is already a little dated, there aren't any competitors better than this one. The Thurnite Archer 2A V3 is currently the most up-to-date 2AA tactical flashlight Thrunite produces. The tail switch is used to activate and deactivate the light, while the side switch is used to change its output. This means that the tail cap switch can be used for Momentary mode! It has 4 main modes and Strobe. You can access strobe by doing a long press with the side switch.  If you are looking for a tactical 2AA flashlight, you can't go wrong with the Archer.

Please check out our full Thrunite Archer 2A review here. 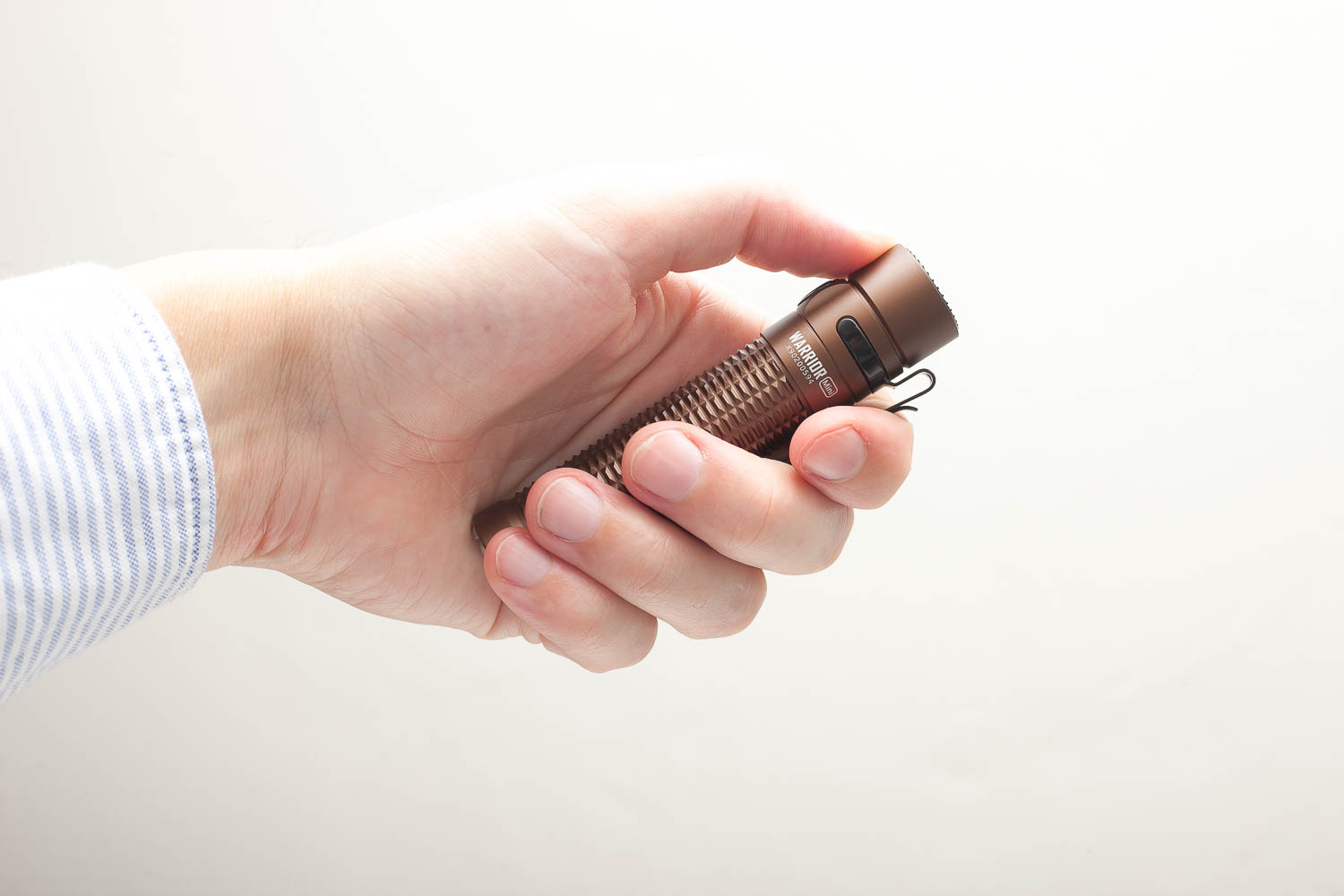 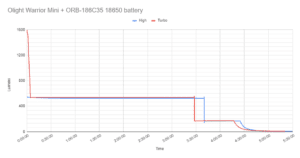 One of the Shortest Tactical flashlights

Buy at Amazon.com
Buy at Olightstore.com

The Olight Warrior Mini is one of the shortest tactical 18650 flashlights on the market. Its primary LED is a powerful Luminus SST40.

During our test, we noticed that the runtime of the Warrior Mini is exceptional. It runs for 18 hours at 140 lumens in Medium mode, while Turbo and High mode last more than 3.5 hours each. Its highest output of 1500 lumens is available for 4 minutes before it drops to roughly 500 lumens. This continues for more than 3 hours. And all of that with a single battery.

The included battery can be charged with a normal lithium-ion battery charger as well is inside the flashlight itself. If you want to read all the details about the flashlight, we have a very in-depth review for you. Please find out more about the Olight Warrior Mini here. 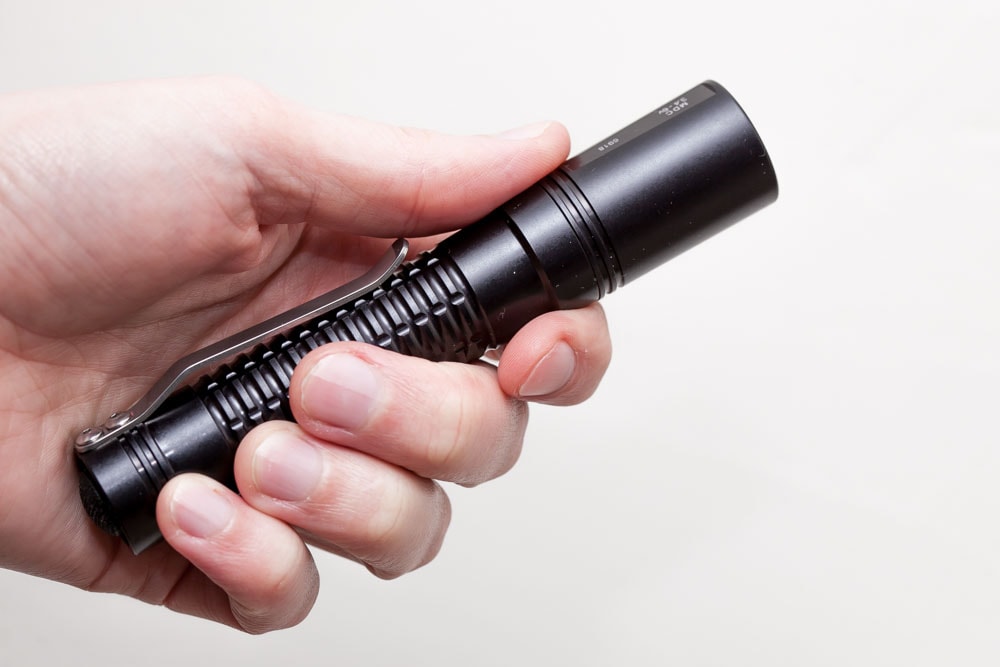 Specialized tactical use flashlight with 1150 out the front lumens

Is durability the thing you value the most? Do you want a light built like a tank? Then consider getting the Malkoff MDC Bodyguard. I mean it.

This flashlight was designed for use with two primary lithium CR123 Batteries or one rechargeable 18650 lithium-ion cell. The best performance and runtime is, of course, achieved with a high capacity 18650 cell. The rated input voltage range is 3.4 - 6V, and input voltages above 6V may damage this light, meaning a 2x RCR123 cell configuration is not supported at all, and will probably fry the light’s circuitry if you try to insert them.  The Malkoff MDC is also protected against reverse polarity battery insertion.

As with all Malkoff products, the Malkoff MDC is manufactured and assembled in the USA. Some parts are not sourced domestically by the company, but that was to be expected for parts like the LEDs, and some electronic components.

If you are looking for a durable light with a lifetime warranty, this is the one to get. Check out the Malkoff MDC Bodyguard review for a more in-depth look at the MDC Bodyguard. Slip it in your pocket when you need 1000 lumens instantly without a complicated UI. I also have to add that the anodization quality is superb. 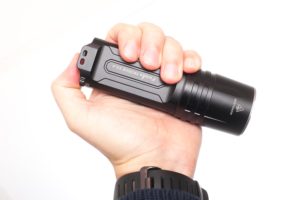 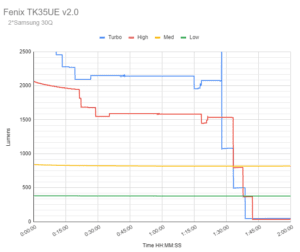 The Fenix TL35UE is a dual 18650 tactical flashlight

There are only a handful of dual 18650 tactical flashlights on the market, and the TK35UE v2 is one of them. This is the latest edition sporting 3 emitters with a total of 5,000 lumens.

And yes, our copy reached over 5,000 lumens albeit on turn on. Read our in-depth review of the Fenix TK35UE v2 for all the juicy details.

The most self-explanatory benefit of this dual 18650 setup is a longer runtime. Having 2 batteries in parallel will double the capacity, and therefore extend the runtime. Oh, please don't forget to buy 2 Fenix button top batteries together with the light because flat tops don't work, and unprotected button tops can be too short! 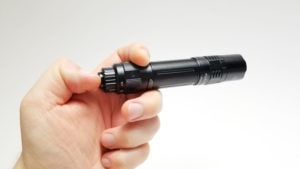 We reviewed the Fenix PD36 Tac. It provides great value for an all-round tactical flashlight kit. The package includes a 5000mAh battery, a carry strap, a deep-carry reversible pocket clip,  a holster, a USB-C charging cable, and twospare O-Rings, so you are ready to go. If you don't want to bother buying a separate battery charger and still want a high-quality flashlight, the Fenix PD36 Tac should be on your wishlist.

All in all, this is a great package, and great for gifting during the winter holidays, when natural light is usually sparse. 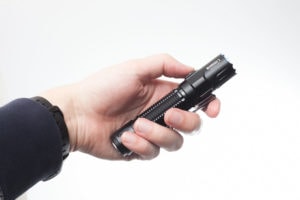 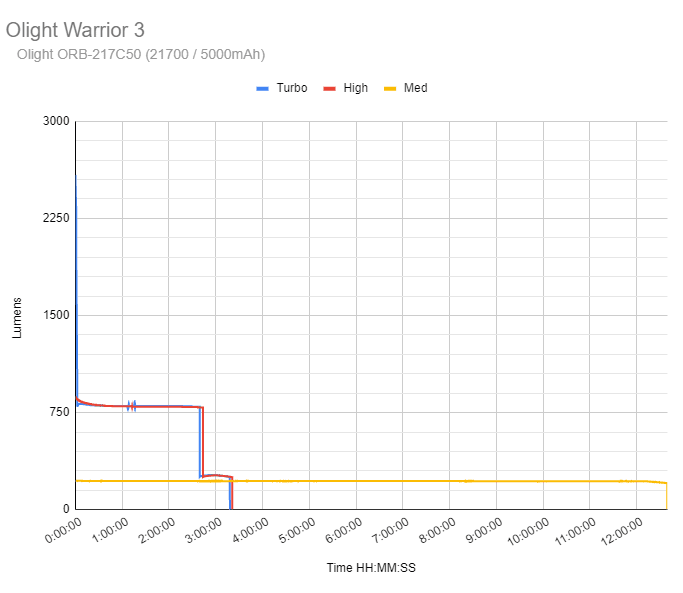 We extensively tested the Olight Warrior 3 and came to the conclusion this is one of the highest quality tactical flashlights currently on the market. It's the successor of the M2R PRO, and performs even better, both in terms of lumens and throw. Of course, the highest output is only available for the first few minutes, but the options and accessories are superb.

I wouldn't recommend carrying it in the pocket because it can cause damage with the spiky bezel. You better use the included high-quality holster or the pocket clip.

Charging goes via the included MCC3 charging cable. All in all, this is a great tactical flashlight with some great features in a ready-to-go package. Read our full in-depth review for all the details.

Use our special code: 1LUMEN for an extra 10% off at Olightstore 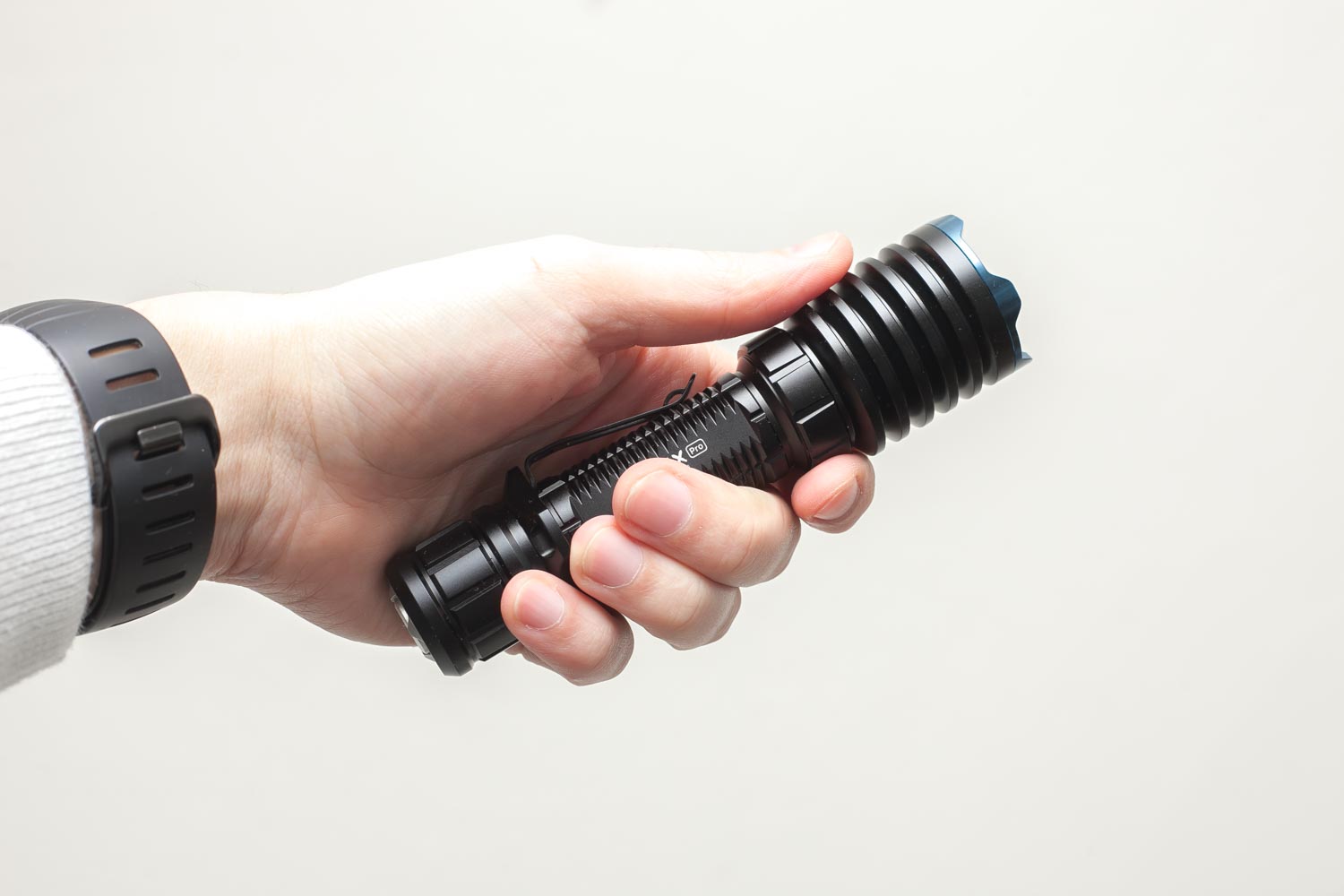 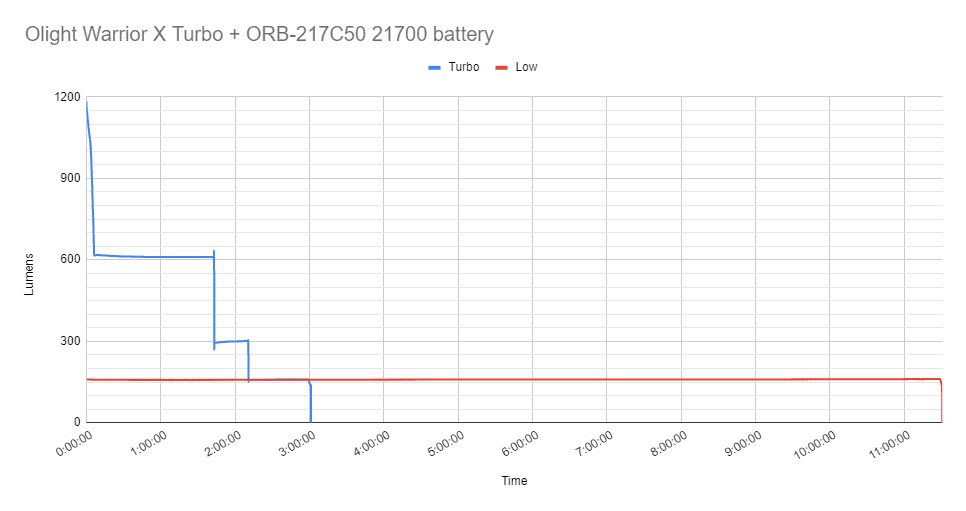 The Olight Warrior X PRO is quite a unique tactical flashlight as it comes with a Vibrating Low Voltage Warning system. When the battery level goes down to 30%,  it starts vibrating once every 5 minutes. When the battery SOC(State of Charge) drops to 10%, it will vibrate every 60 seconds. When it drops to 5%, it does so every 10 seconds.

This is another flashlight that has lots to offer. It has 2 modes, 1 Turbo and 1 Low. No hidden modes like strobe or anything else. Probably my favorite, or even the best tactical flashlight with 21700 batteries. We did an in-depth review on is, please check it out here: Warrior X PRO review. Use code: 1LUMEN for 10% discount at Olightstore 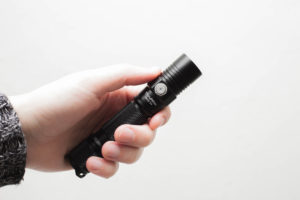 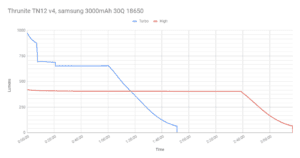 If somebody asks: what is the best affordable tactical flashlight you recommend: the answer is Thrunite Tn12 V4. For $40 you get a cheap tactical light with lots of accessories and plenty of power.

The user interface is easy to understand, so everyone knows how to use it within a minute. It also includes a strobe mode, that can be accessed easily by a press-and-hold of the side switch (while on).

The accessories include a holster, lanyard, extra o-rings, and a spare rubber switch boot, and a pocket clip. Just add a high capacity 18650 battery and you're ready to go. If you are looking for a budget tactical flashlight, you can't go wrong with the TN12 v4.

Oh, and of course we reviewed this flashlight as well. So please check out our in-depth review of the Thrunite TN12 v4 here. 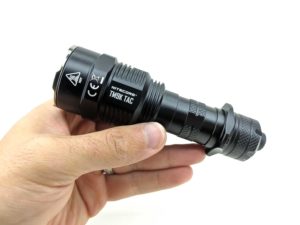 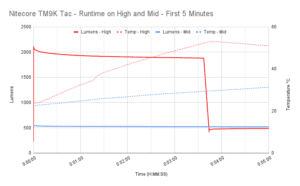 Buy at Amazon.com
Buy at Nealsgadgets

The Nitecore TM9K Tac is definitely a special breed. It's about the size of a C8, but multiple times the output. Instead of the average 1000-2000 lumens tactical lights, the TM9K does 10 times that amount, but only in short bursts though. Since Turbo can only be activated momentarily, by continuously pressing the tactical switch.

With the built-in 21700 lithium-ion battery, you can get a burst of over 10,000 lumens. The 9 LEDs are sitting in a shallow reflector that results in a maximum candela of 23,425 cd or 306 meters of throw. High mode still reaches 136 meters / 149 yards. If you want the baddest and brightest Tactical light, get this one.

(With the focus on high power in combination with throw.. 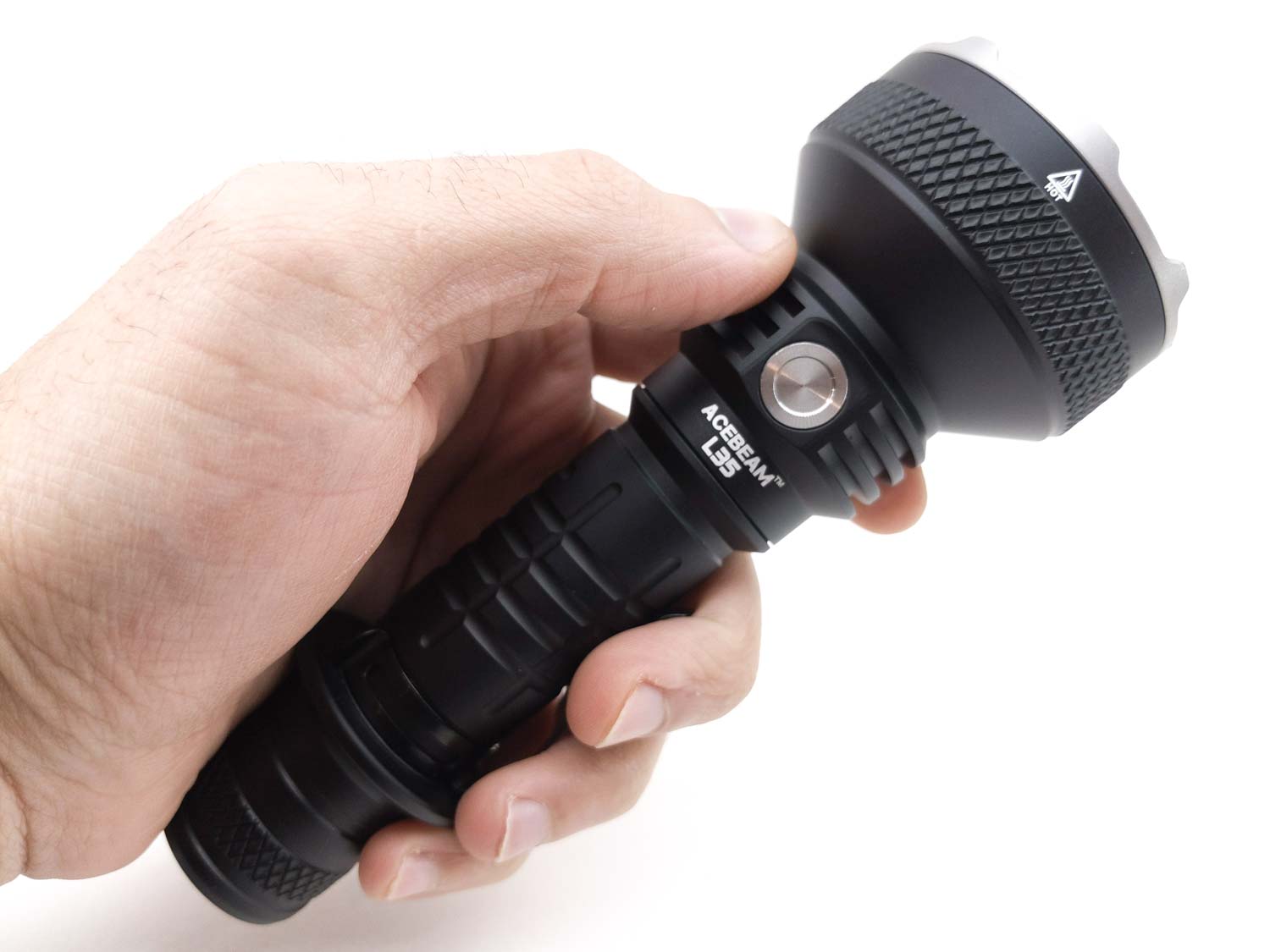 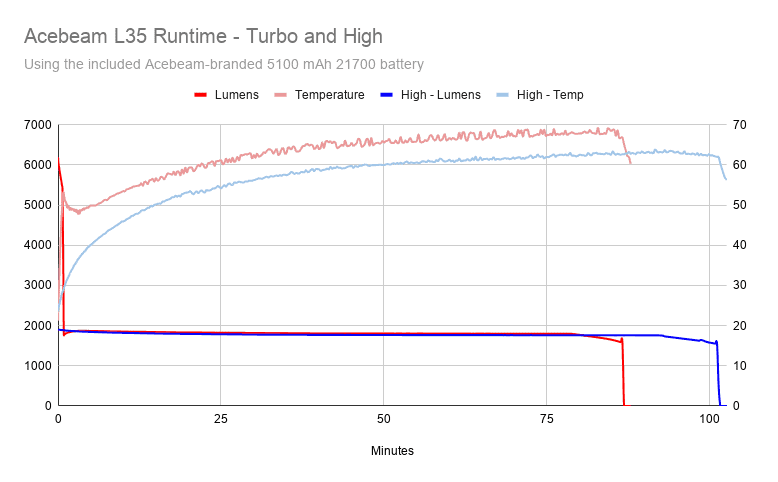 Best tactical thrower in the world

Buy at Amazon.com
Buy at Acebeam

The Acebeam L35 is a golden goose. It is currently one of the best tactical throwers in the world. Sporting a CREE XHP70.2 it claimed to deliver 5,000 lumens, but we measured 6189 lumens.

After the initial drop in output (see the runtime graph, or read the in-depth Acebeam L35 review), it stays just below 2000 lumens for almost 1.5 hours. That is insane! This is the best tactical thrower you can buy at the moment. The beam isn't too narrow because of the XHP70.2, and you can light up a vast area in front of you. You need a high-power single 21700 battery (ours included one), and you have a ready-to-go tactical kit. The only gripe we found is the slow charging of the battery, at 0.75A. If you have a dedicated charger, this is no issue at all. This tactical thrower is highly recommended. Want to know more? Check out our Acebeam L35 review.

What is a Tactical Flashlight?

First of all, a tactical flashlight has great build quality, with a simple user interface, good battery life, large battery type compatibility, and a good warranty, just in case something goes awfully wrong, which shouldn’t be the case anyway.

In my opinion though, my particular feature set would look like this:

Some people suggest such a light should be attachable to a pistol or a handgun. But that doesn't make it a tactical flashlight! Those are weapon mount flashlights.. a different class entirely, with different uses and characteristics. Some people say Tactical Flashlights are only used in combat.. that is also untrue.

What is the Brightest Tactical Flashlight?

In terms of reliability, something like the Malkoff MDC would be your best bet, along with Surefire in a close second, for superb warranty support and extensive availability.

IMHO, these kinds of lights should be put in a category called: “Flashlights to toy around with when bored”. Check out this fun Youtube video. It’s just a classic from Advanced Knife Bro: https://youtu.be/swSU5GbWjgM

What is the Best Affordable Tactical Flashlight?

My first question would be: what for? Do you plan on using 18650 batteries? When will you be using it? Generally speaking, the Klarus XT1A seems to be the cheapest of the bunch, not breaking the $50 mark. It's the most affordable tactical flashlight, while still not sacrificing important features. It does lack the battery life of its bigger 18650/21700 counterparts, but easy availability of NiMH cells counters that a bit.

What is the Best Tactical Flashlight under $40?

The best tactical flashlight under $40 must be the Thurnite TN12v4 we reviewed. Great all-round package with lots of accessories and great quality. It uses a 18650 lithium-ion battery, so you need to buy a battery and charger separately.

What are the most pupular tactical flashlight brands?

There are lots of great brands producing Tactical flashlights. But some pay lots of attention to this specific market. Brands like Fenix, Olight, and Klarus are amongst the most popular ones.