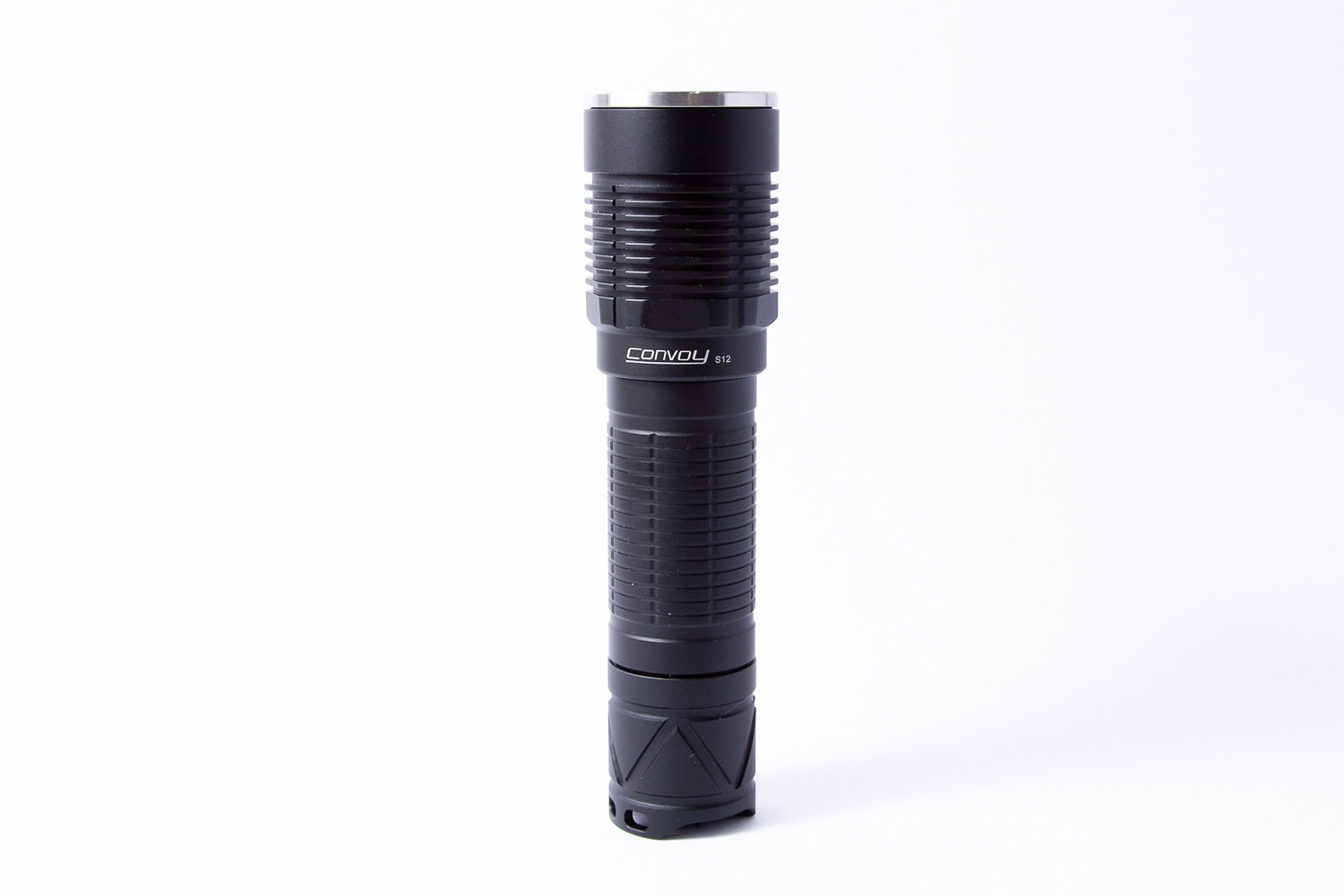 Convoy has a long history of providing good lights at a great price - I’d challenge almost any flashaholic out there to say they don’t have a Convoy light around somewhere; most likely an S2+. The Convoy S12 is the brand’s entreé into the triple-emitter arena. While it’s not in the “traditional” triple (ie. with 105xx Carclo optics), the larger lens and reflector setup gives the ability to do a bit more with the light than would otherwise be expected. Does it live up to the promise? Let’s find out.

This is my first 21700 light, so I’m somewhat excited to see how the slightly larger form-factor handles!

The S12 was packaged in the standard white rectangular Convoy box - very basic, but has what you need. My box has no labelling whatsoever, and upon opening, I find:

That’s it. Nice and basic; no manuals or spare o-rings, just the essentials to open it up, whack a battery in, and get going. The box was slightly roughed up by the journey to me, but there’s no evidence of any damage to the light whatsoever. 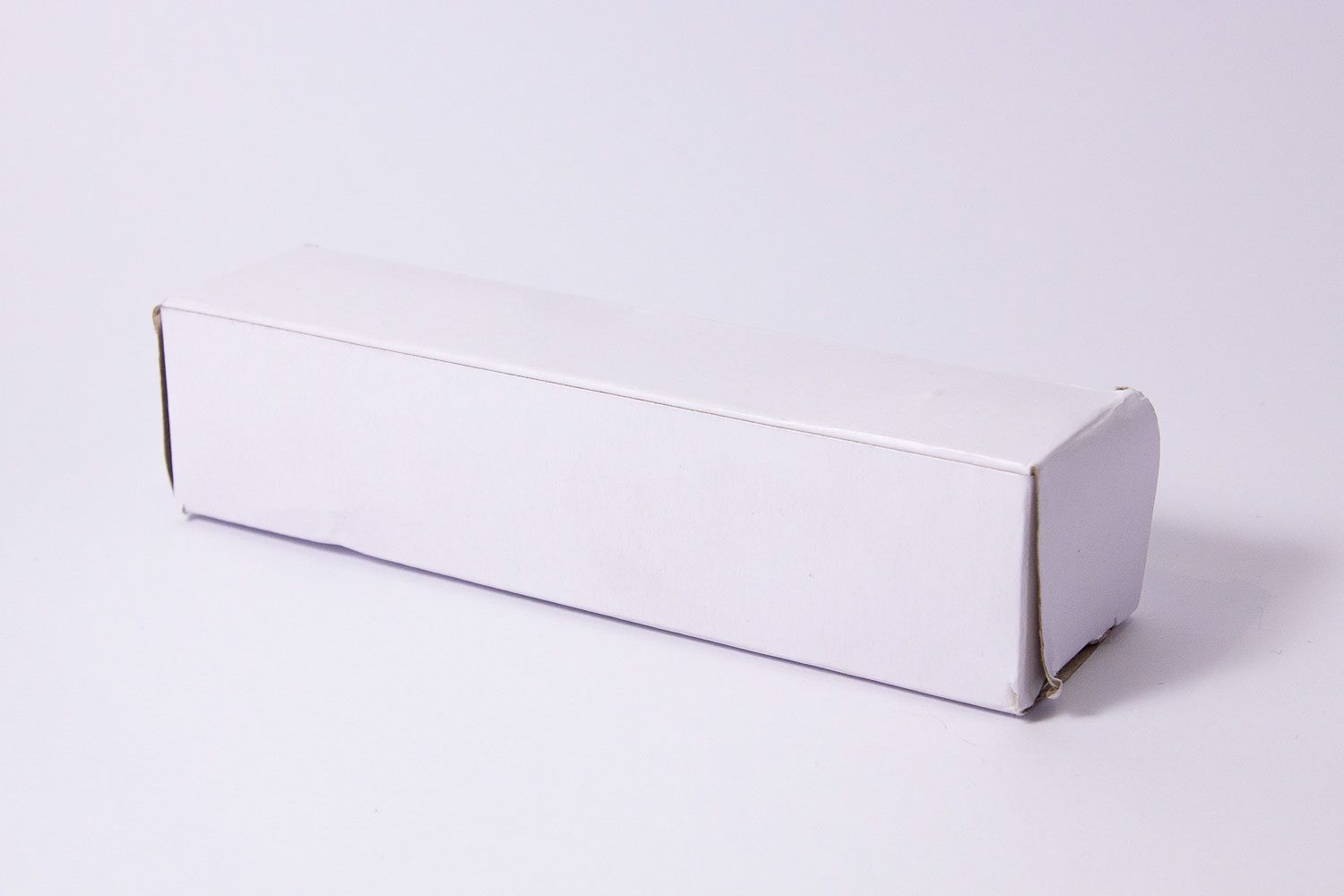 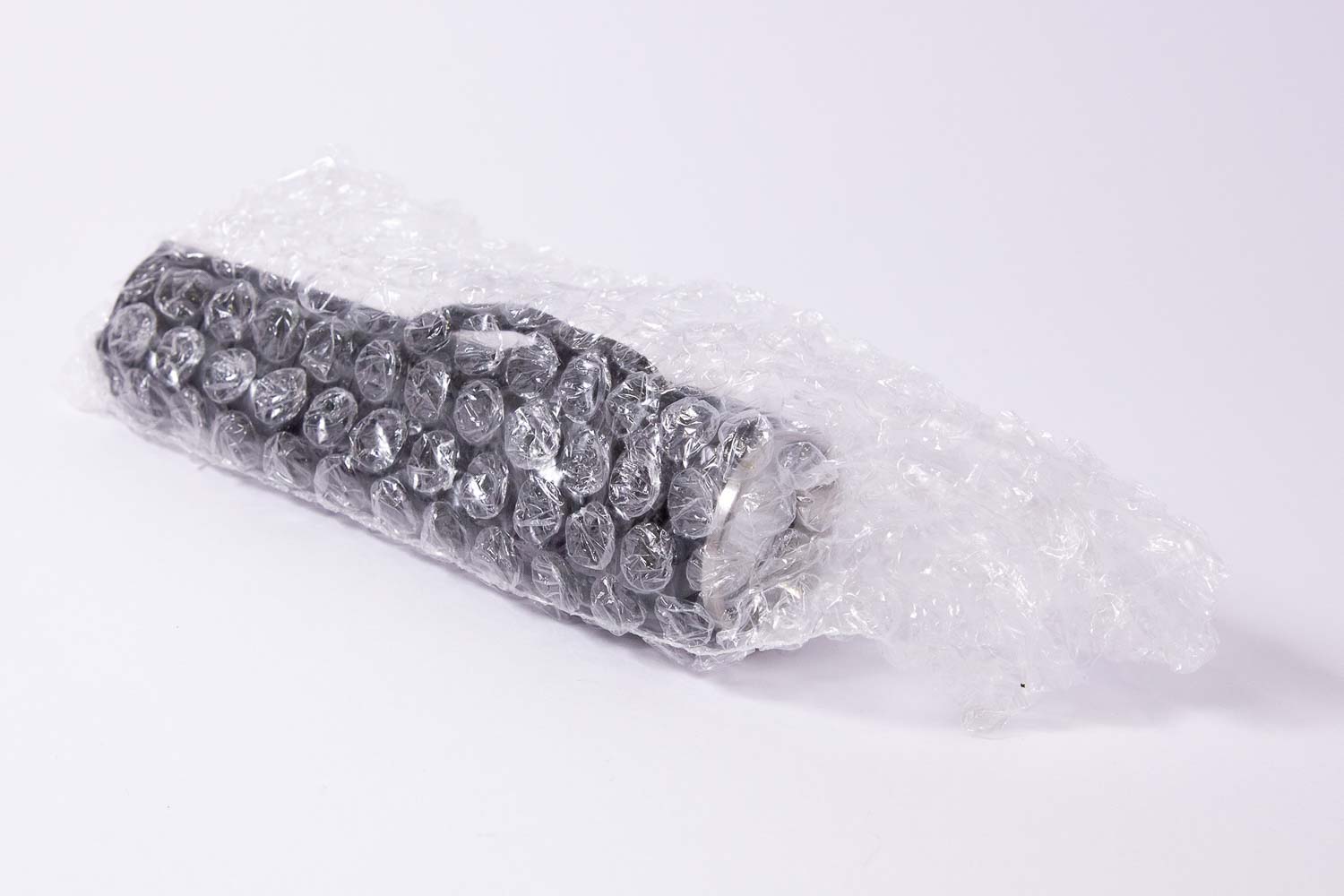 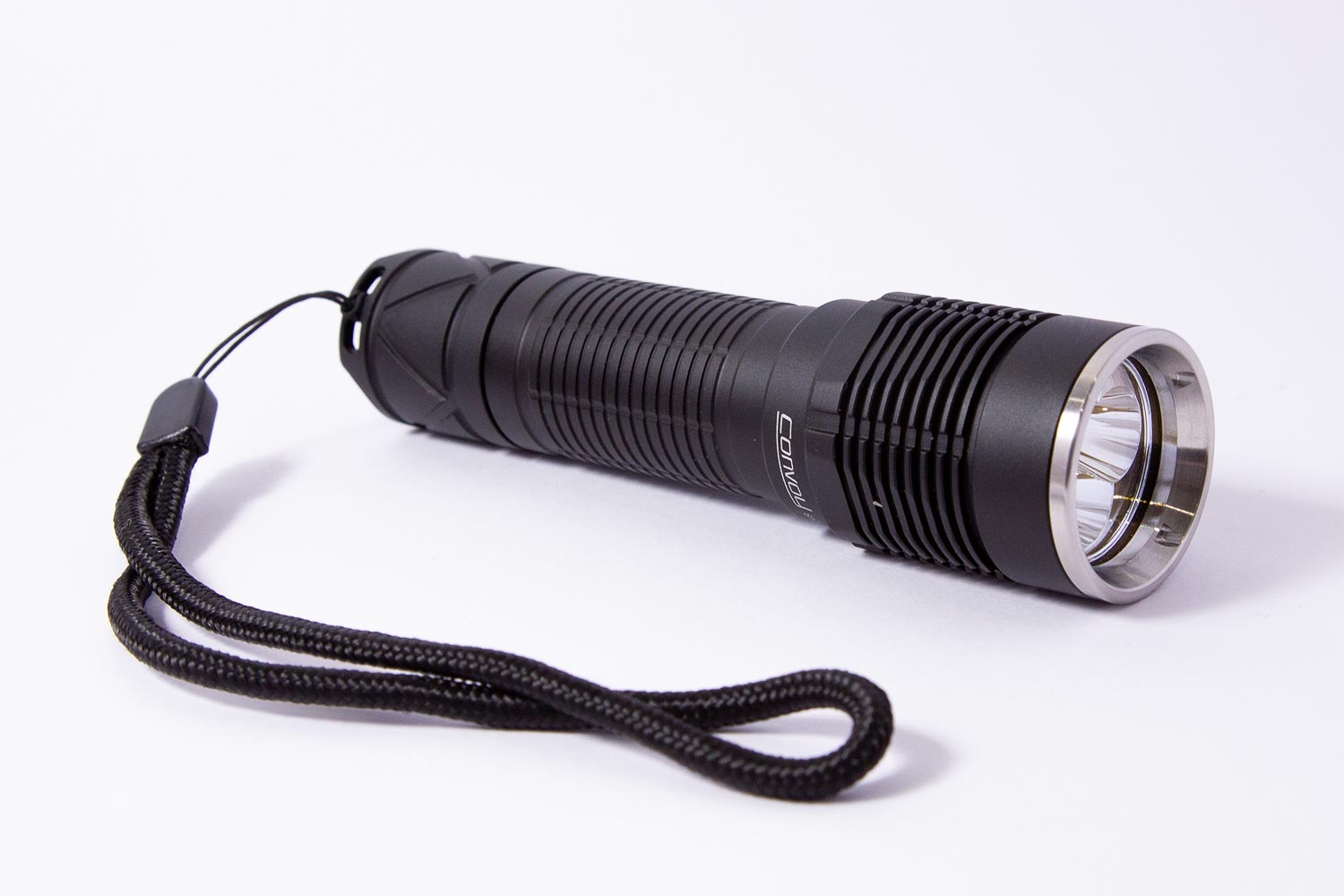 At the risk of sounding like a bad joke, the first thing I thought when I took it out of the box was “oh, that’s smaller than I thought”. This isn’t inherently a bad thing! The S12 fits neatly in my palm, my thumb fits neatly onto the “scoop” out of the heat fins on the head, and with the Samsung 40T, and in a nice flip of familiarity, it weighs almost exactly what my phone does (iPhone 7 Plus, 188g, plus a thin case).

The lanyard included is quite good! I’ve tested “dropping” the light with the lanyard around my wrist, and there’s no sign of it giving way. It’s also quite large, which is very nice, compared to some lanyards I’ve received from lights in the past (cough FT03 cough). 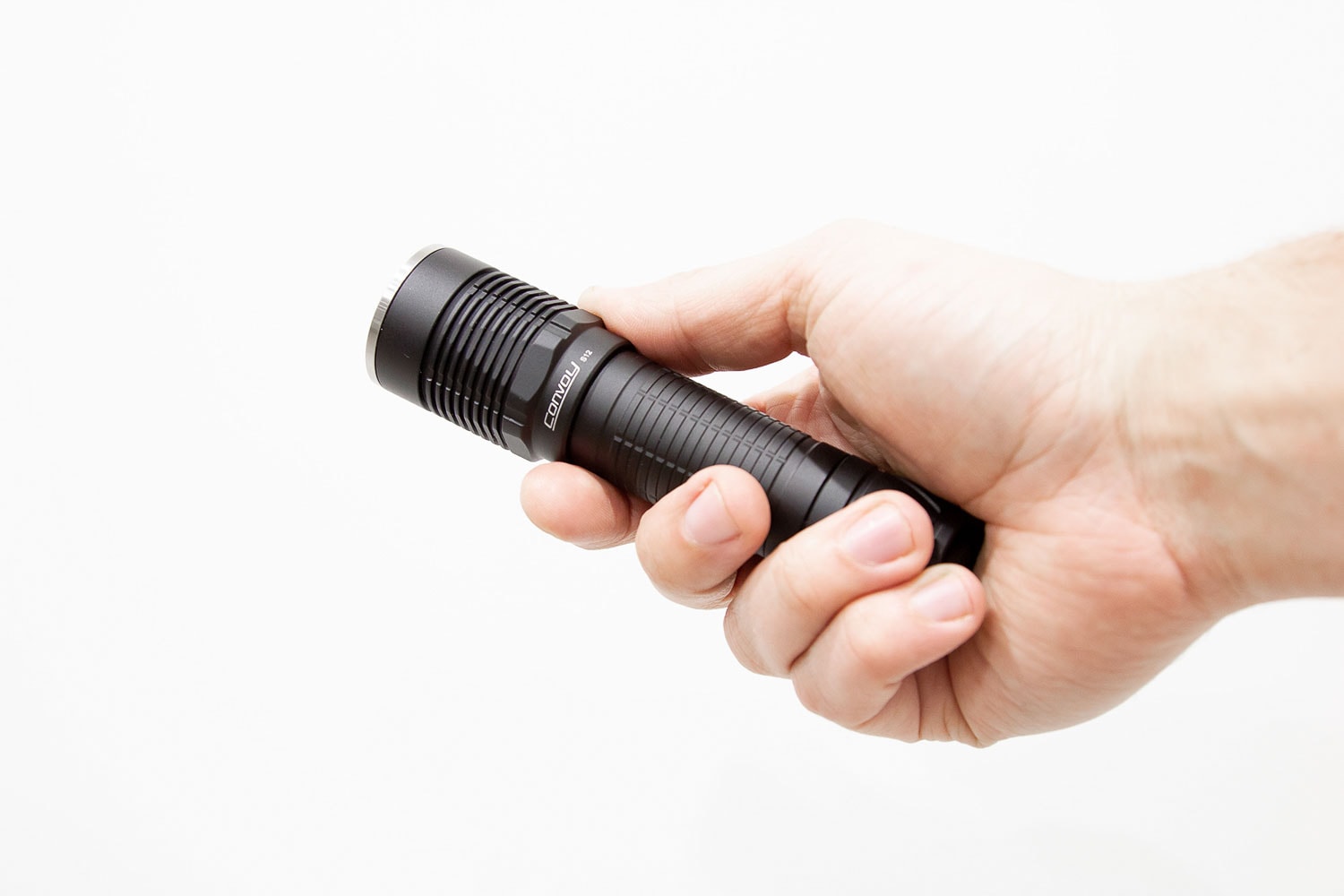 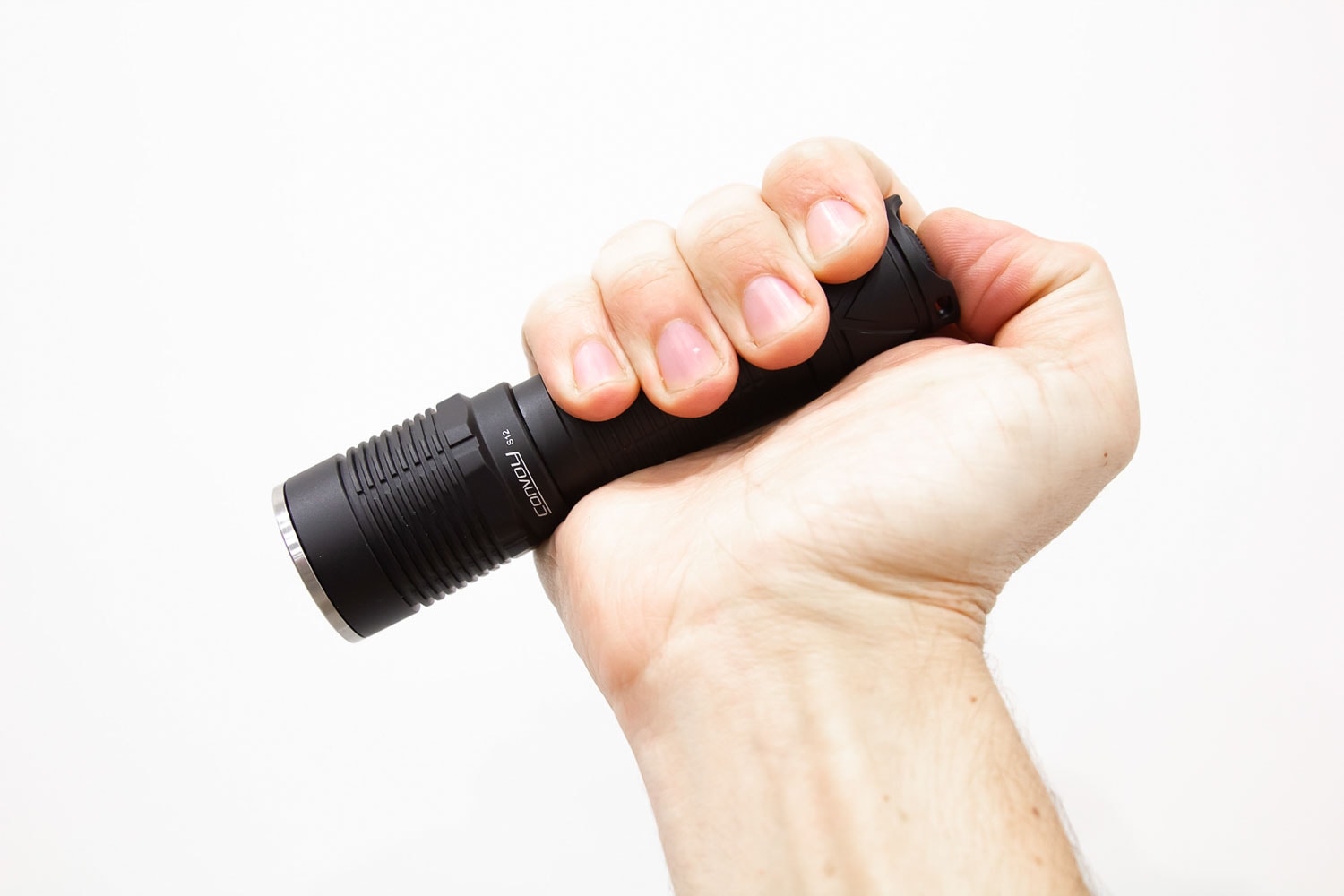 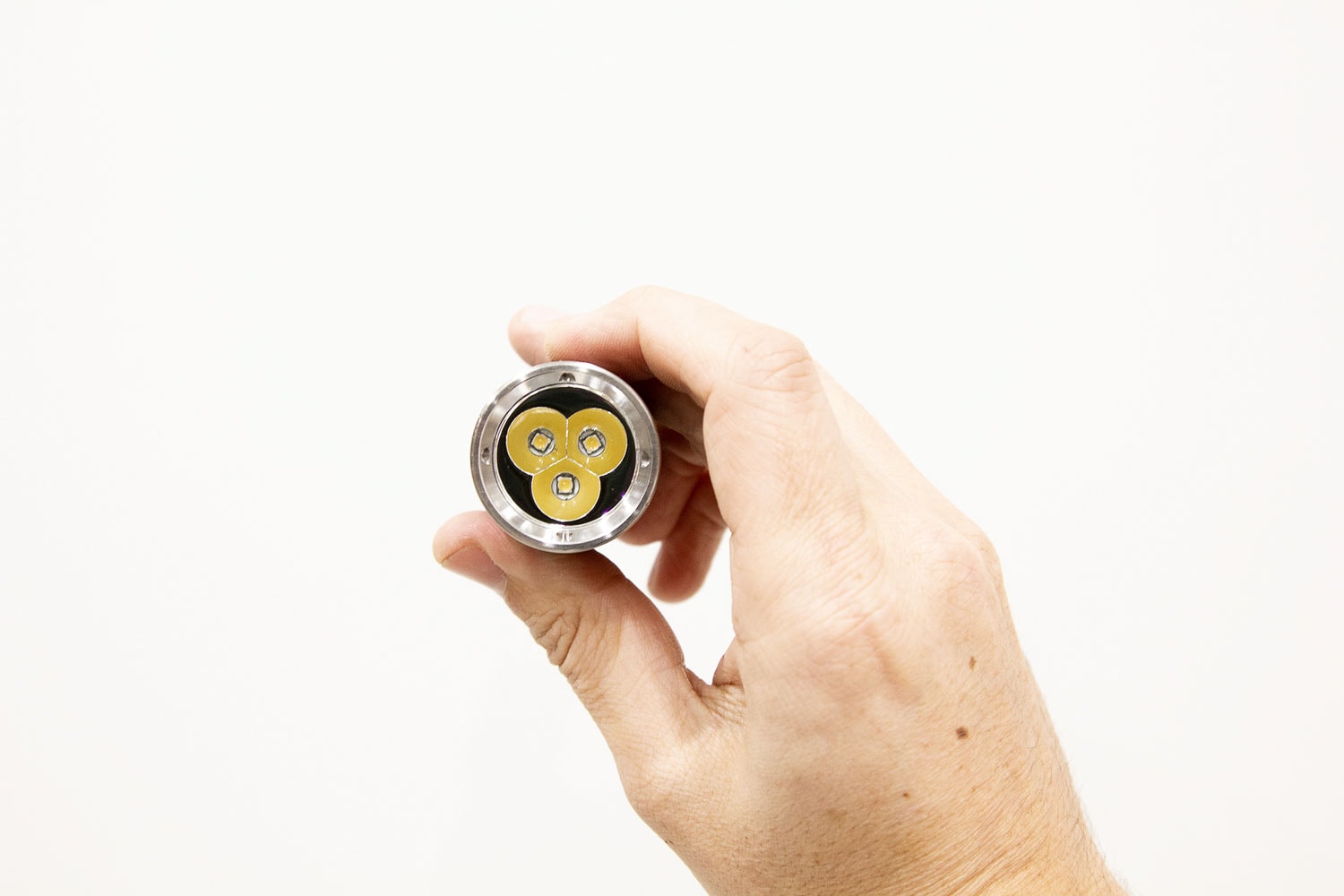 As expected from a Convoy light, the S12’s build quality is very good. There are no excessive gaps between parts, anodisation is spot-on, threads are lightly lubricated - all qualities that enthusiasts have come to know and love from the brand.

Anodisation is solid, and smooth to the touch. As a clip wasn’t included, I haven’t tested scratching of the ano; deliberate vandalisation of lights isn’t something I want to do, after all.

There are four o-rings on this light - one on each end of the battery compartment, one between the bezel and the head, and one between the glass and reflector. My guess is that as such, the S12 is somewhat water resistant - but without specific ratings, I can’t be sure of just how much. I’m also somewhat hesitant to drop the light into a bucket with a battery on it to test the theory!

I can’t detect any sharp edges anywhere on the light, which my hands are very pleased about. The knurling on the battery component is quite smooth - some may not like this for the lower amount of grip vs other lights, but I’ve found it very pleasant; I’m not taking this into an environment where grip is paramount, so the point is moot. 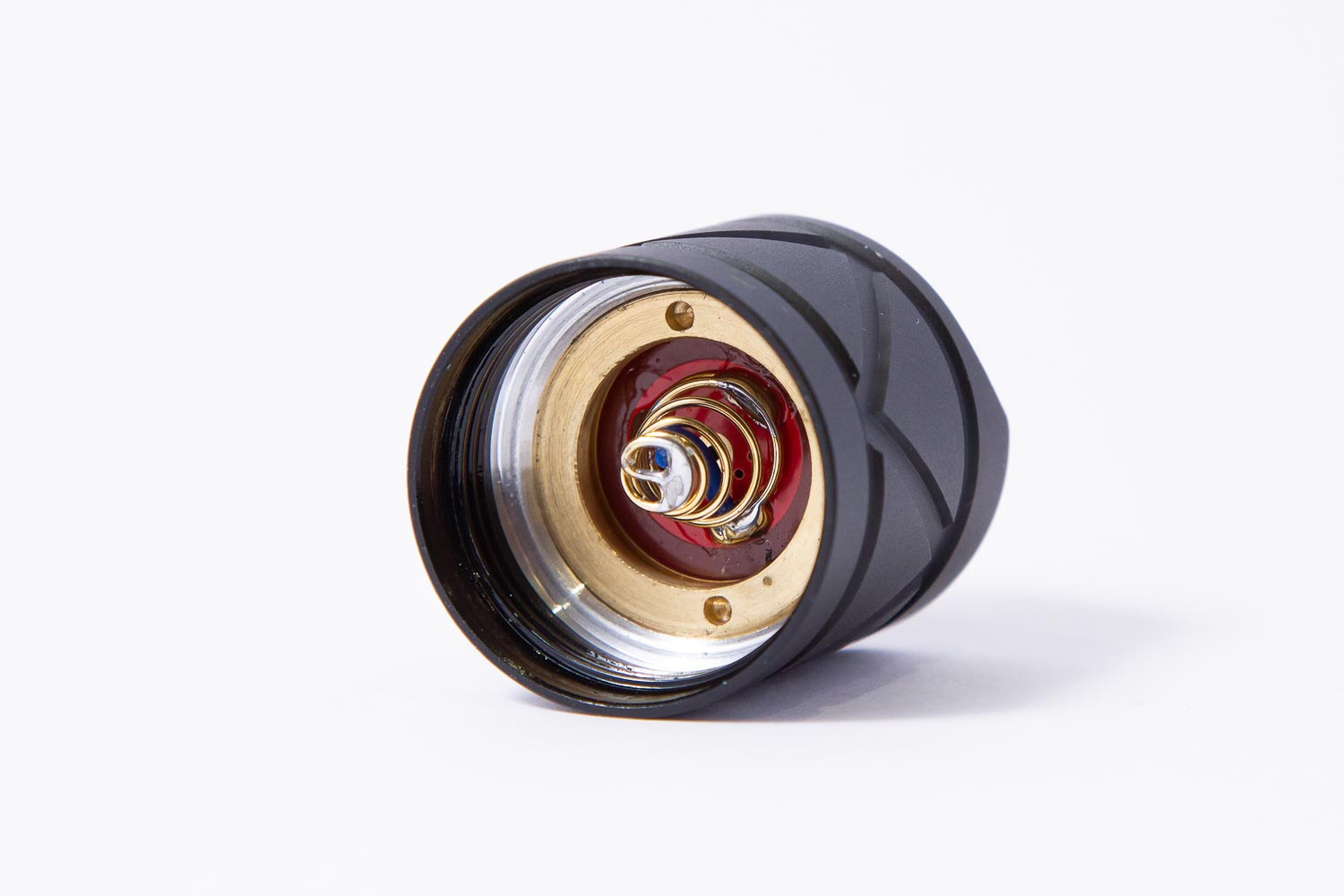 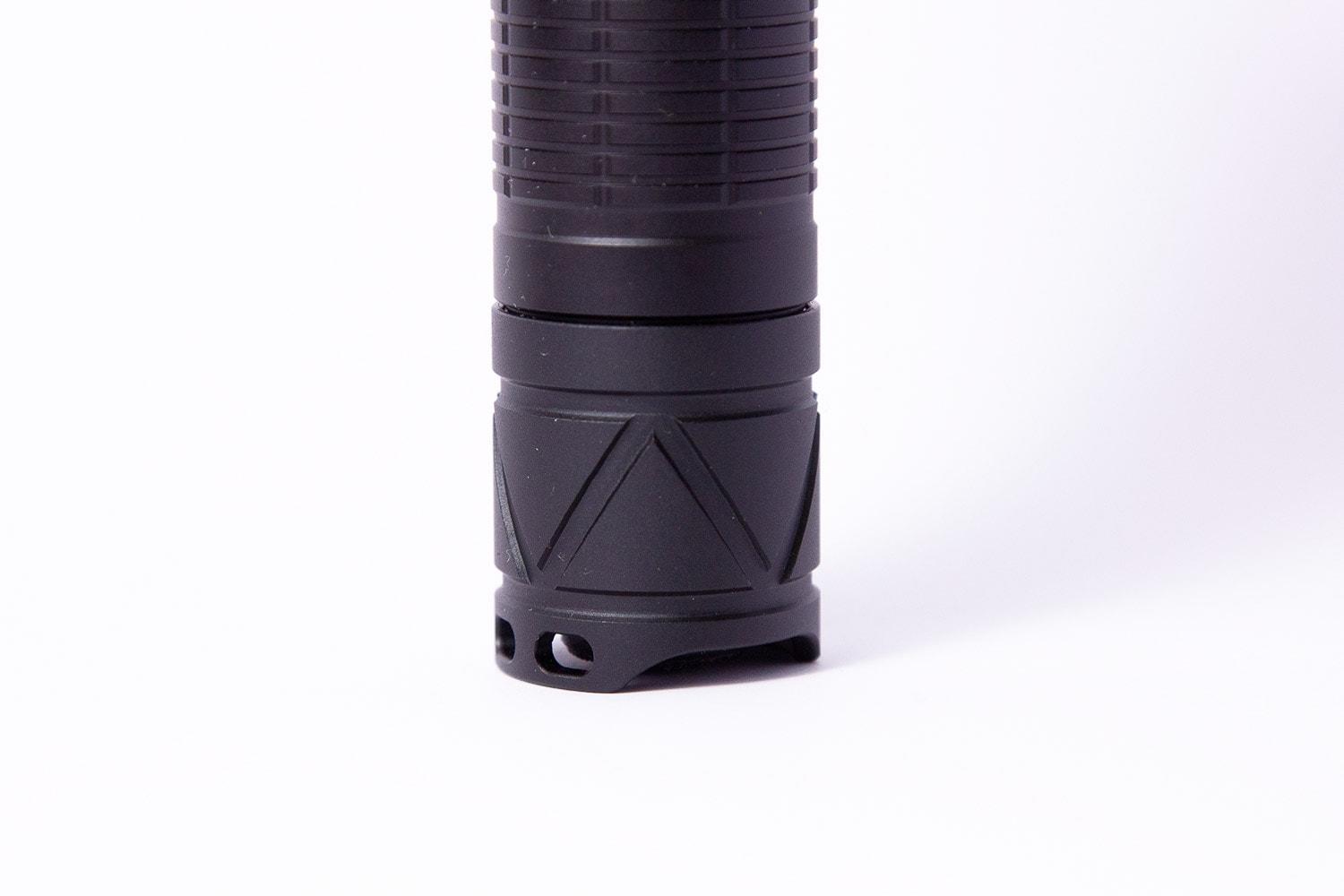 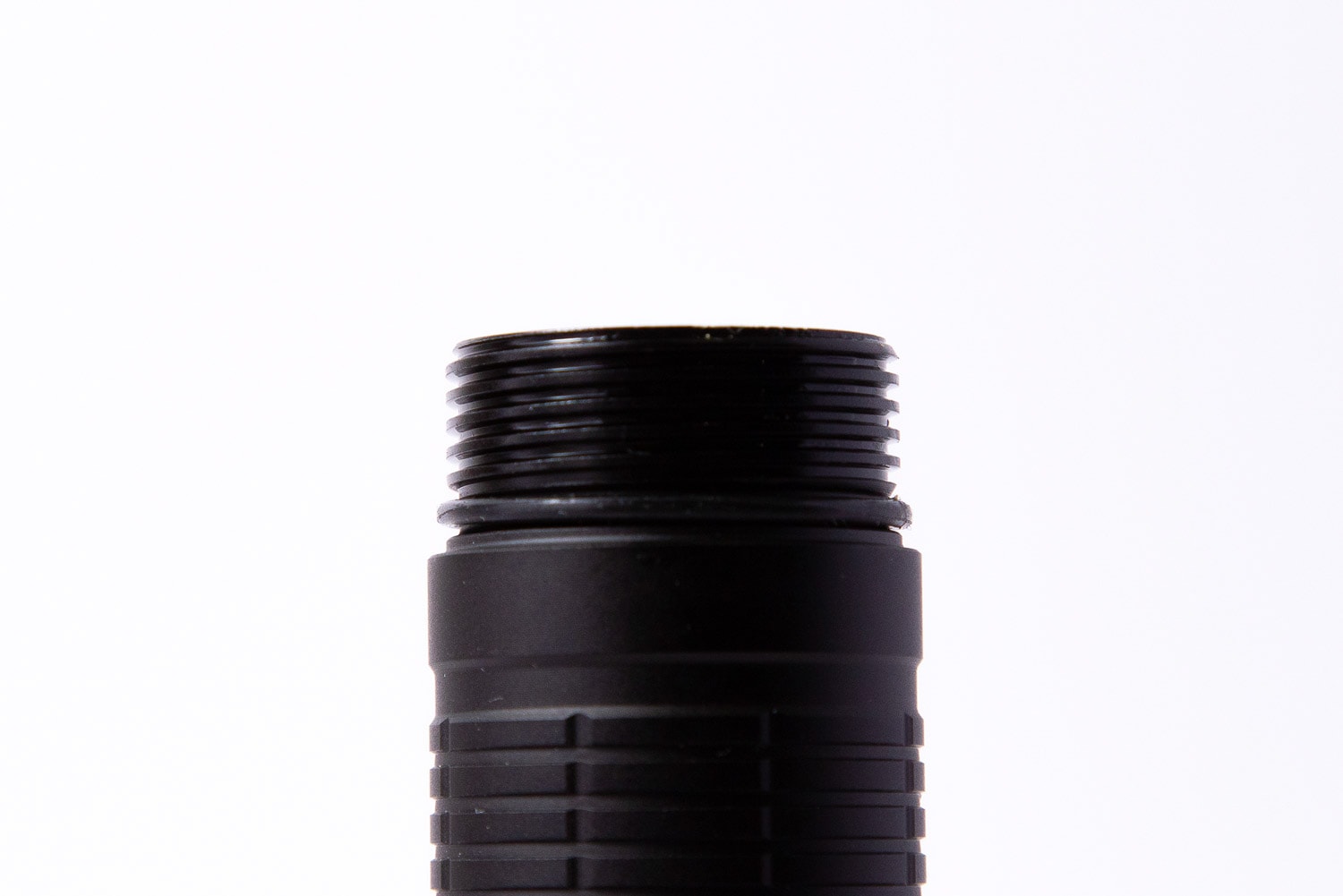 The emitter chosen for this light was the Nichia 219C 4000K 90CRI, which is a very pleasant slightly warmer tone. I’ve come around to warmer temperatures lately, and this is far more neutral than I expected. It doesn’t suffer from the green-tinge at low brightness like the SST20, nor does it suffer from the tint-shift that Cree emitters seem to. The only downside of this is that there’s a decent amount of heat generated by each emitter, so on turbo, it’ll be heating up quite fast, even at only 2A per emitter.

The bezel itself is smooth at the edge, with four indentations for circlip pliers to allow it to be removed easily. I was able to unscrew it by hand though, so they may not be necessary. An interesting note though; the product information doesn’t mention this, but the bezel is stainless steel (confirmed with Simon, the owner of Convoy). The AR glass is surprisingly thick - 2.5mm! This has put somewhat of a pause on changing this into a UV monster… more on that in the modding section.

The pointy end of the light has a custom triple reflector, with smooth texture. The interior of the three reflectors is lower, so there’s spill between the hotspots, which gives a far more usable beam.

The reflector setup gives a very interesting “petal” beam, with a notable line from one emitter’s petal - this is from one of the indents in the bezel. I’d suggest it wouldn’t be a bad idea to do away with the indents given how easy it was to unscrew, so as to eliminate beam artifacts from them.

I’ve had mixed responses to the “petal” effect, but personally, I’m loving it. It gives a bit of extra personality to the light.

See beamshots at the bottom of the page. 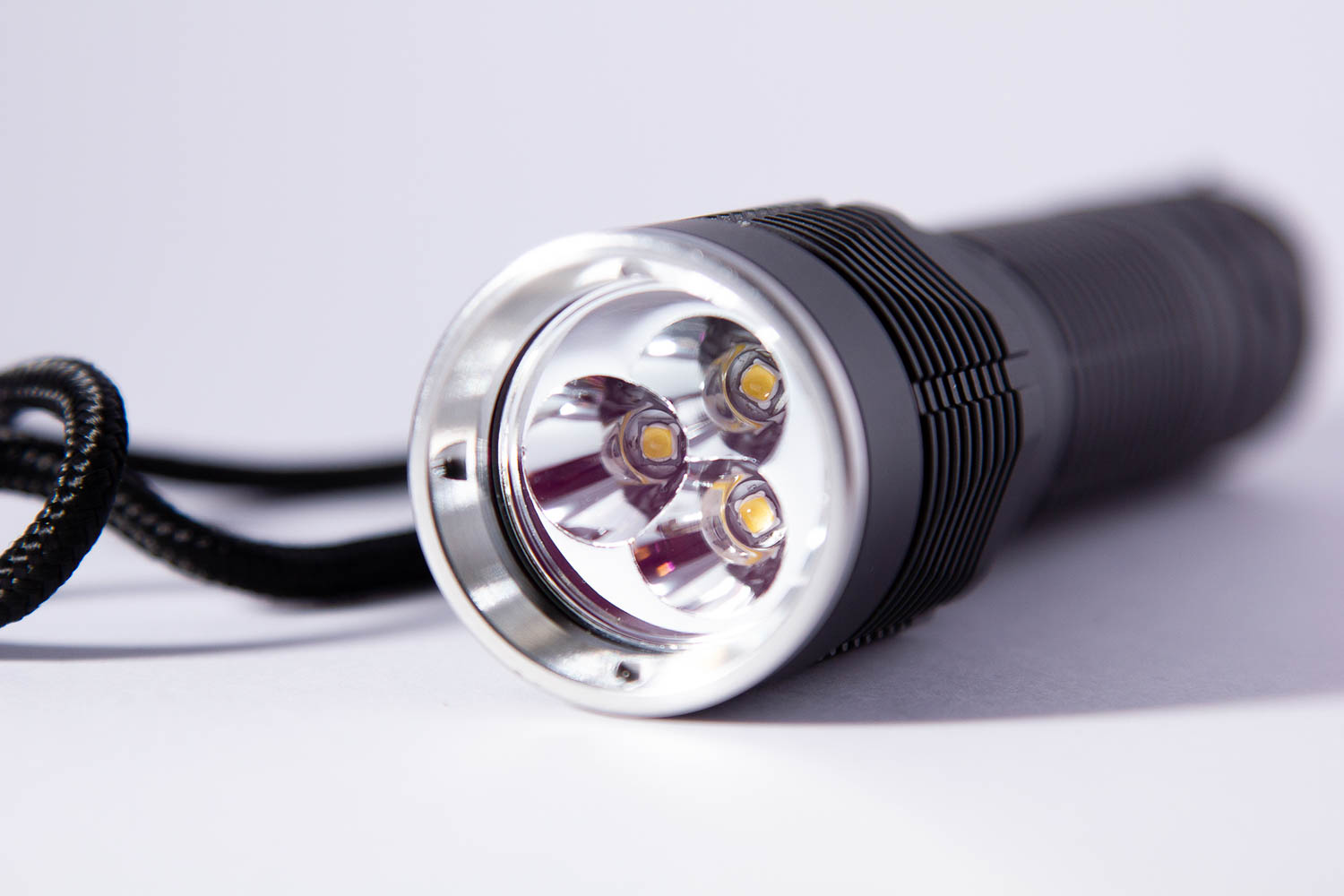 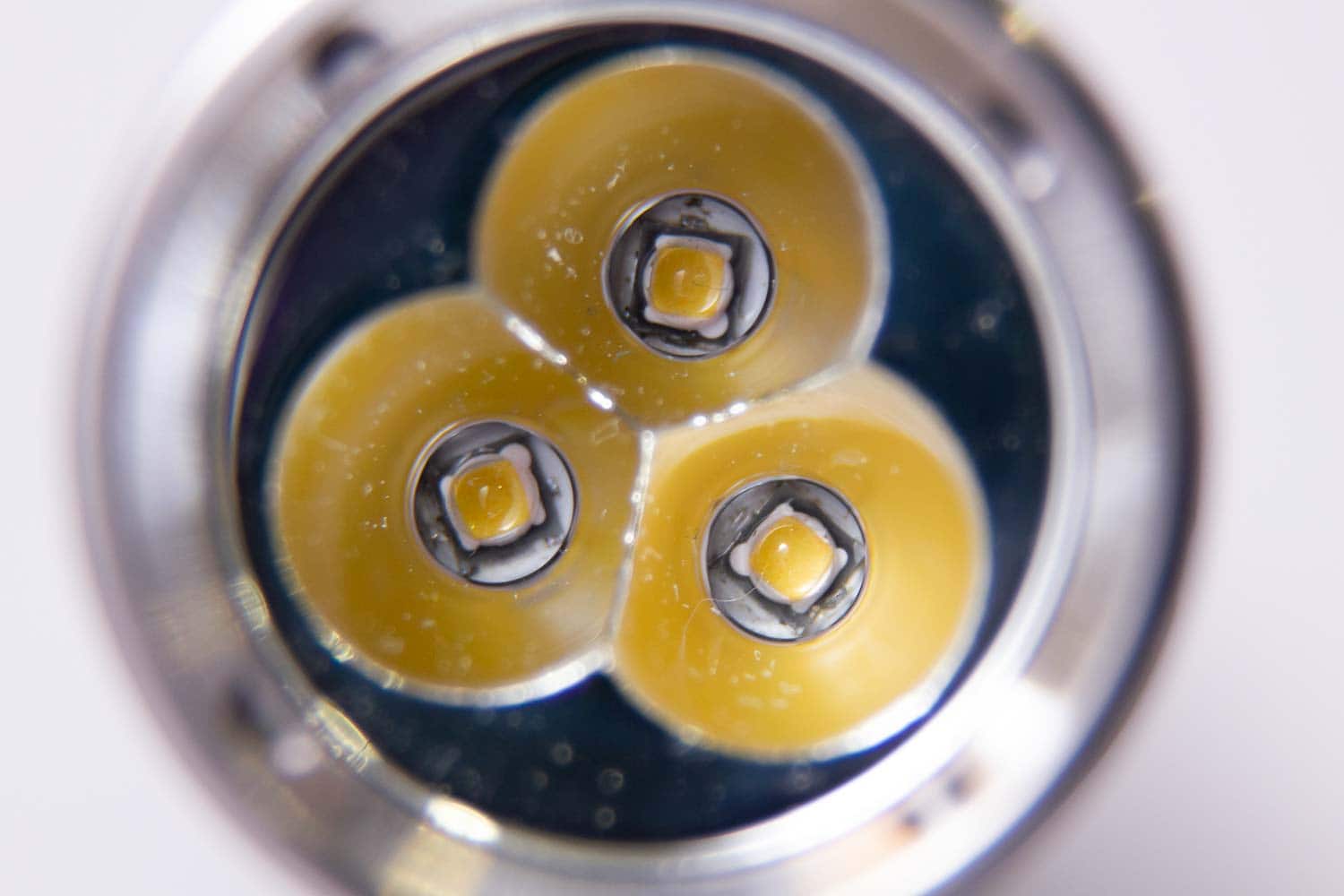 Size compared to the Lumintop FW3A, Convoy S11, Convoy S2+ and Astrolux FT03
Compared to the others this might be a bit on the large size for an EDC flashlight. 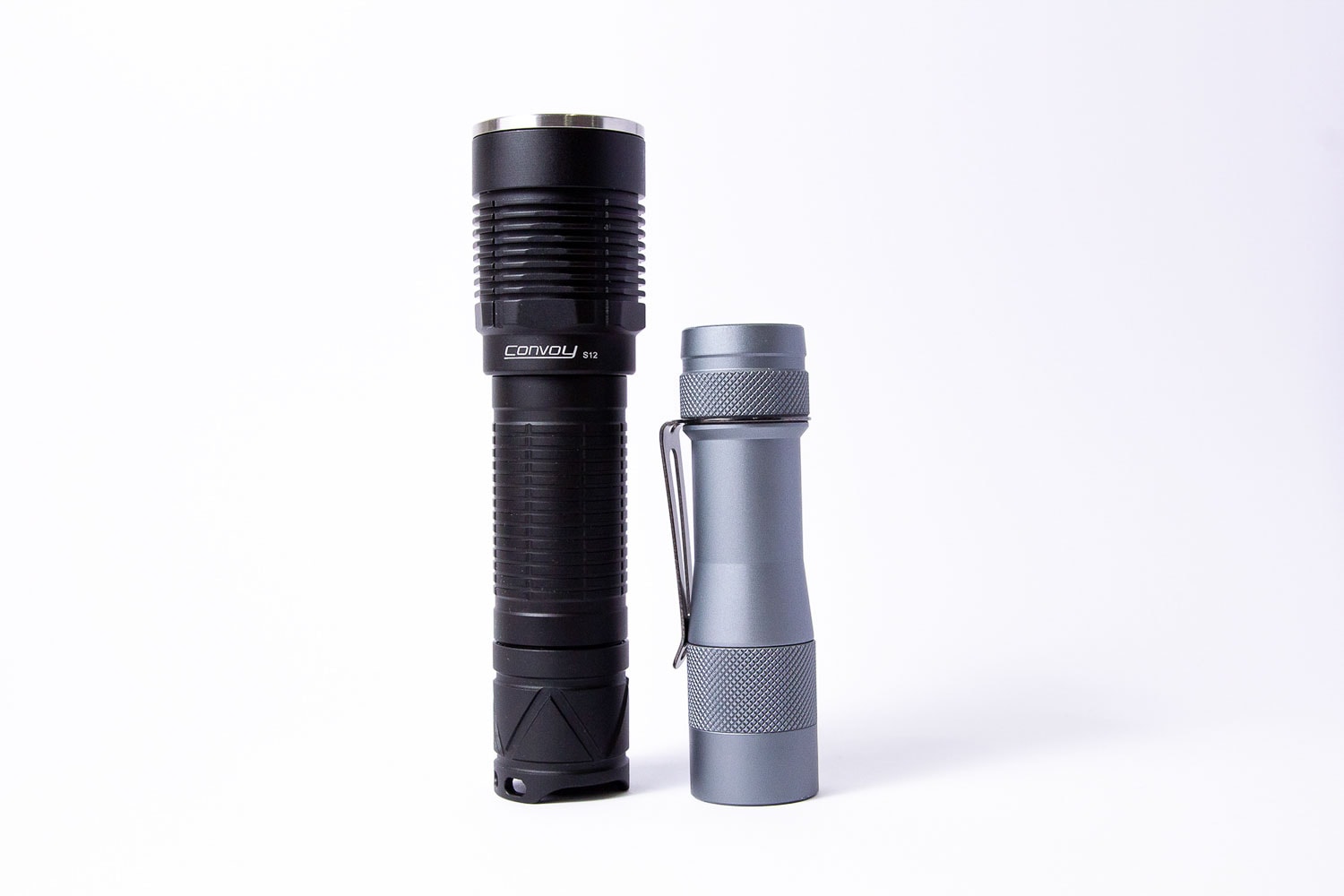 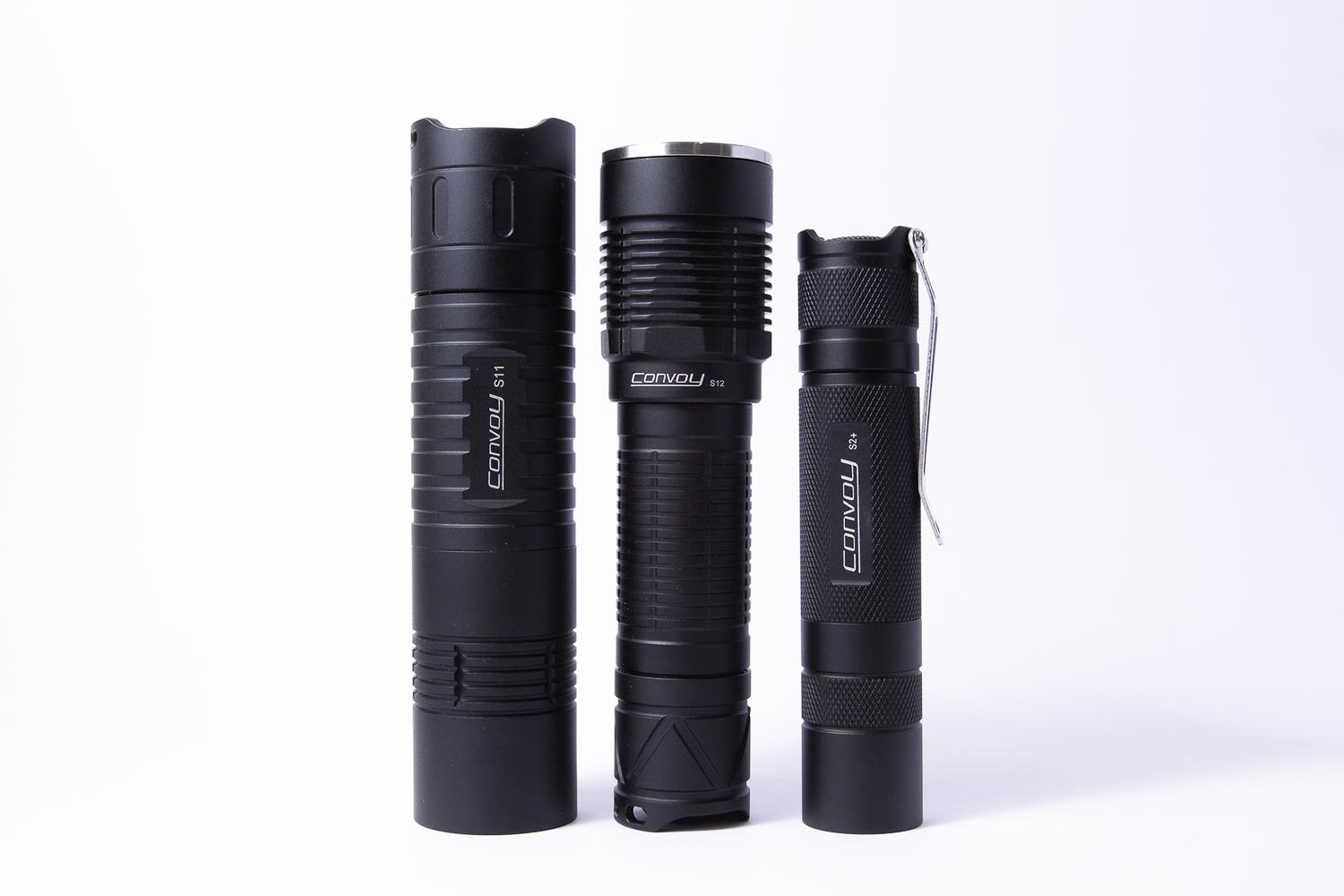 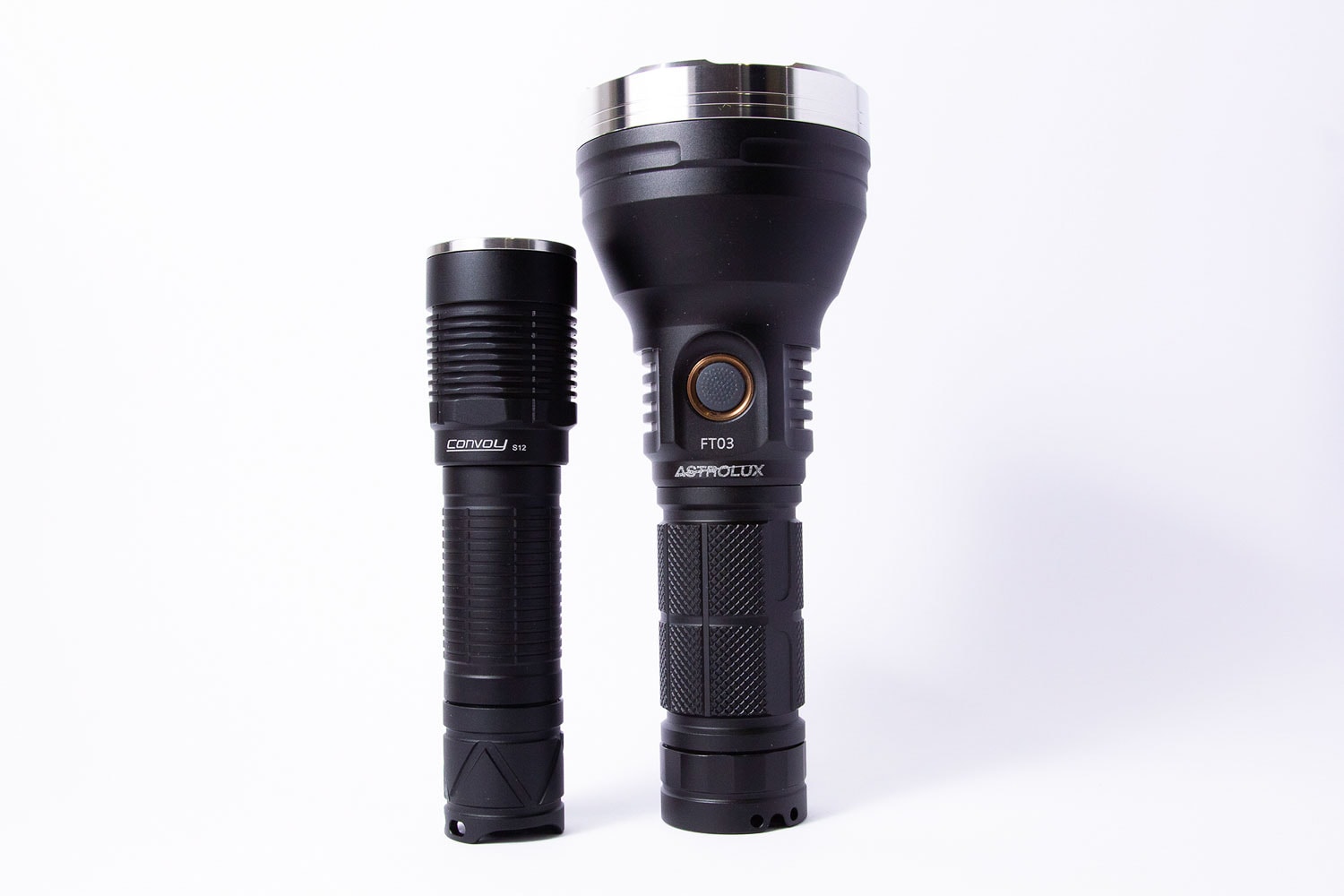 The S12 uses Convoy’s 6A driver that’s in quite a few of their lights. A simple UI with 4 modes, and mode memory. It uses a reverse-clicky switch.

The driver in the Convoy S12 has thermal management, but it’s set at 55 degrees - this may be somewhat low for some people, as it’s measured at the driver (via a thermal resistor), and not reflective of the heat your hand will feel, or the emitters. There’s a way to remove the thermal management though; I’ll cover that in the modding section.

The light has both low voltage protection, and reverse polarity protection, which is always nice. Lockout is done purely by untwisting the tailcap ¼ turn for a mechanical lockout.

This light uses 21700 cells, but in the past there have been issues on some Convoy lights and specific wider cells. The inner diameter is 22mm, so all but the widest of 21700s should fit! If you’re unsure, measure your cells first.

18650’s will also work, but will most likely rattle around. No adapter ring was provided, but you could always use some paper to pad it.

Protected batteries are purported to work, but I don’t have any to test with. The springs are fairly tall though, so I’d be very surprised if they didn’t. 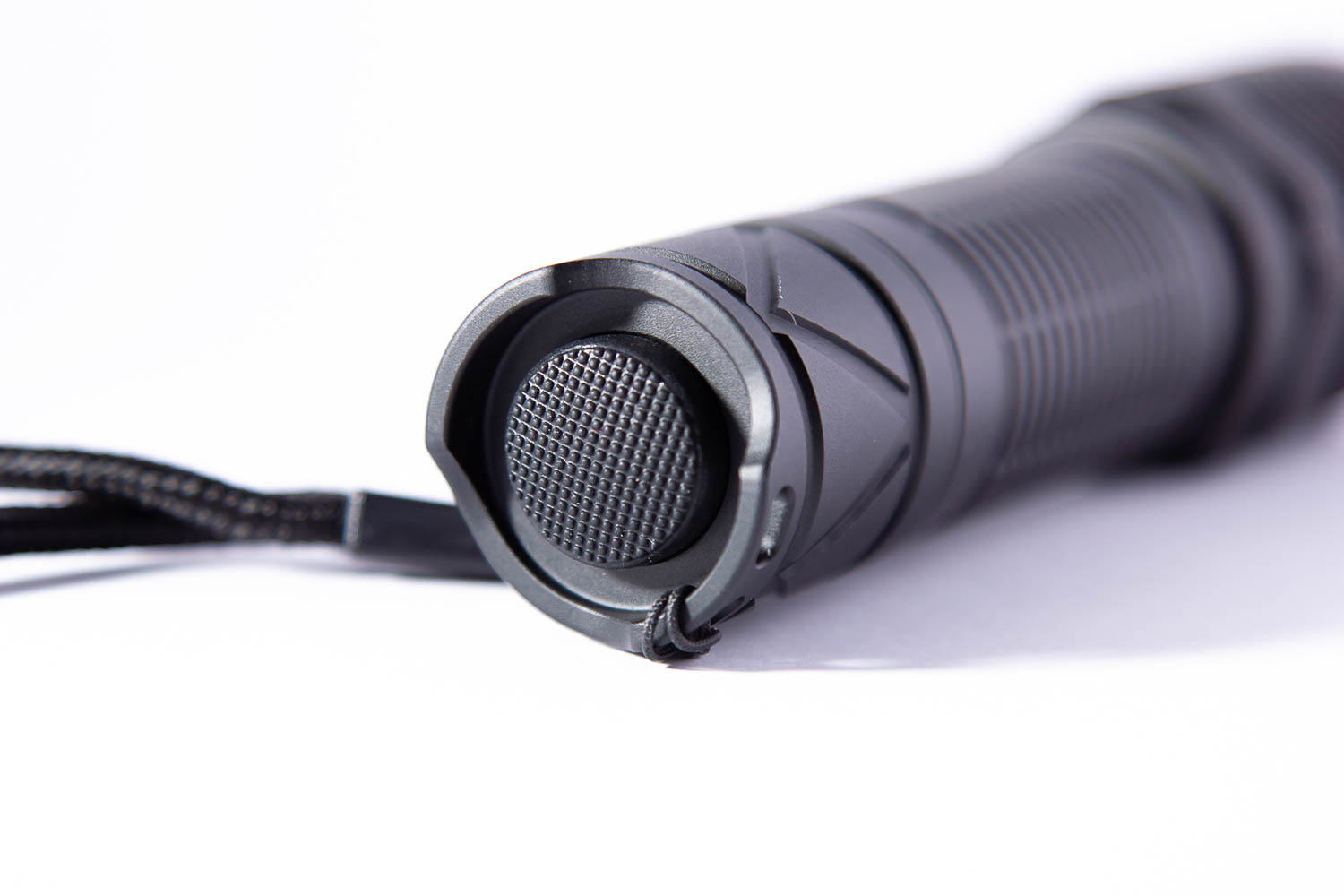 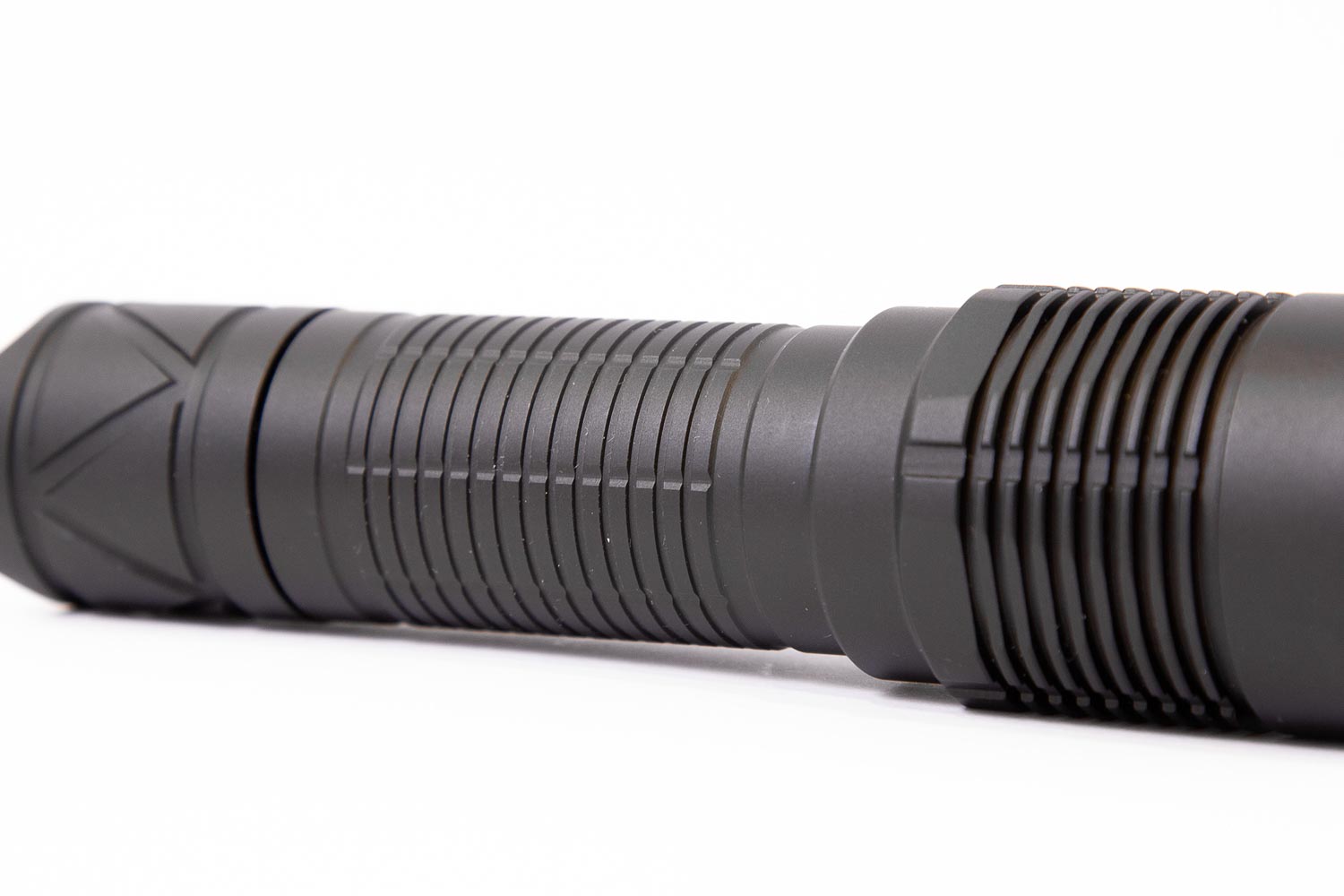 All of my readings were taken from a fully-charged Samsung 40T - I recharged it between each test. The number in brackets after each measurement is the advertised current (ie. 100% being 6A, first mode is 0.1%, 6mA). Either my DMM is somewhat enthusiastic, or it’s slightly off - but it’s very close!

I tested Amps with a Fluke 87 and short 12AWG wires, to eliminate losses over wire.

As my lumen tube is still being built and there are no official specs from Convoy, I’m extrapolating data from TexasAce’s testing of the 219C that is in this light. This gives an educated calculation without the ability to directly test. I took the amps, divided by three, then plotted that amperage on TA’s graph to get single emitter lumens, then multiplied by three again to get the combined output, given that it’s not a straight line.

Note that these are estimates, but estimates with some data behind them. 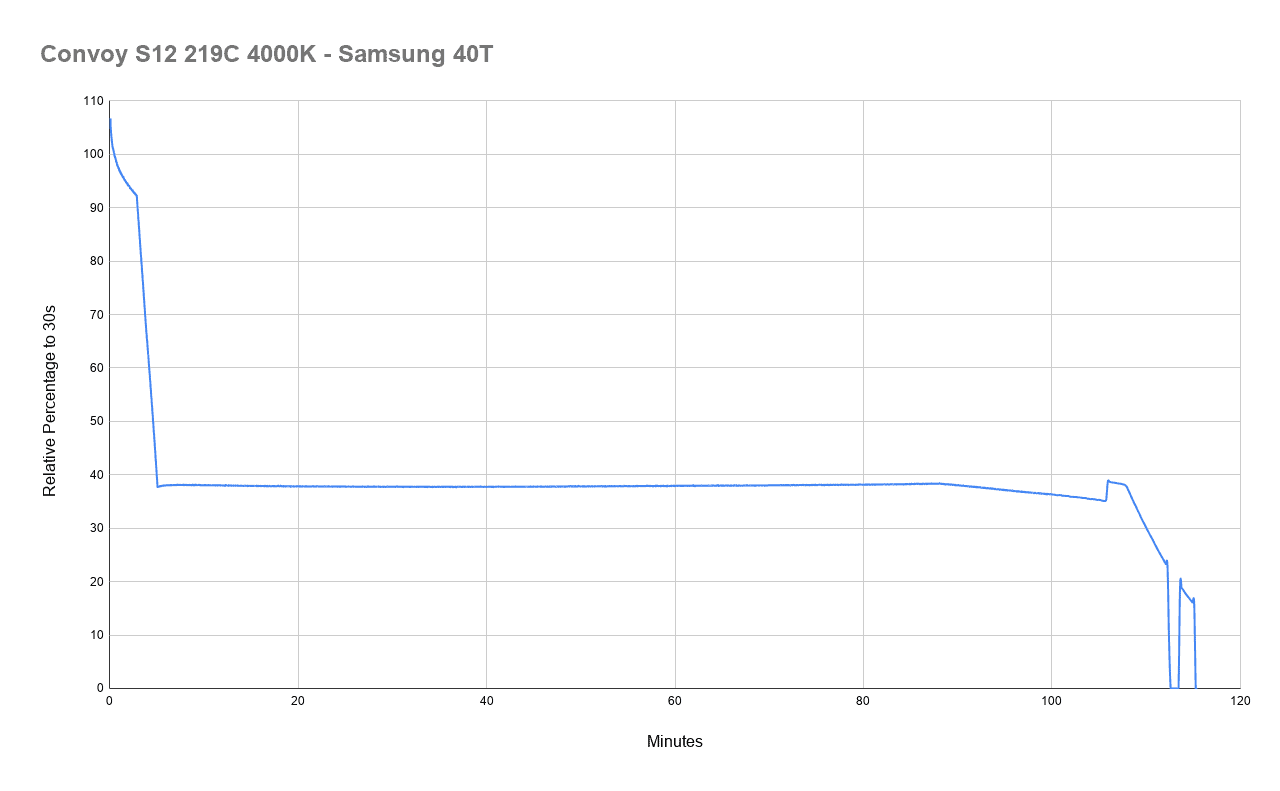 As seen in the runtime graph, running on the highest mode only gives a short amount at full blast before thermal throttling kicks in, and when it does, it kicks in hard. Just before the three minute mark, my light dropped rapidly to very close to 38% relative brightness, and sat there for a very long time (around 84 minutes). I can’t then explain the rest of the graph, as this was in a room with the door closed and no external light - although I suspect that the last section is where the voltage dropped below the LVP mark, and then bounced back up after a while, sufficient to “reignite” the light as it were, before finally dropping again.

Measurements were taken both indoors and outdoors with the Uni-T UT383S. I took three measurements at  both 5m for indoors and 10m for outdoors, and so as to account for any variance in my aim, I’ve averaged the results. Given that this light is a multi-emitter light, I’ve set the lux meter to “max” mode, and waved the light gently around to let all of the hotspot hit the sensor, so as to capture the brightest point.

Using the high mode only, I get:

While this definitely isn’t a thrower by any stretch of the imagination, it still provides quite decent range for what it is.

The driver design of the Convoy S12 lends itself to only simple modding - the easiest way to push more brightness out of this light is to send more current down it. The R010 resistor on the driver board can have another resistor in parallel to increase the 100% amperage; to increase it from 6A to 7.2A, an R050 can be laid on top and soldered down. The size of these resistors is 2010 (or 5025, metric), though I have had success with 2512 due to scarcity of 2010-sized low-value resistors. Some common resistances will add the following if put in parallel:

Emitter swaps should be relatively straightforward too - 3535 footprint.

Perhaps the craziest thing that I’m going to attempt is making this a UV monster - Emitter swapping with some SST-10 365nm emitters, and replacing the AR glass with a ZWB2 filter. Now, the glass on this is around 30.5x2.5mm, and I’ve found a 30x2mm on AliExpress, or 29x1.5mm on KaiDomain - It won’t be perfect, but at least pretty close. I’d also probably do a resistor swap to R015 to limit it to 4A - while the SST10 in djozz’s tests indicates that 2A should be no problem, I’m not prepared to take that risk just yet. 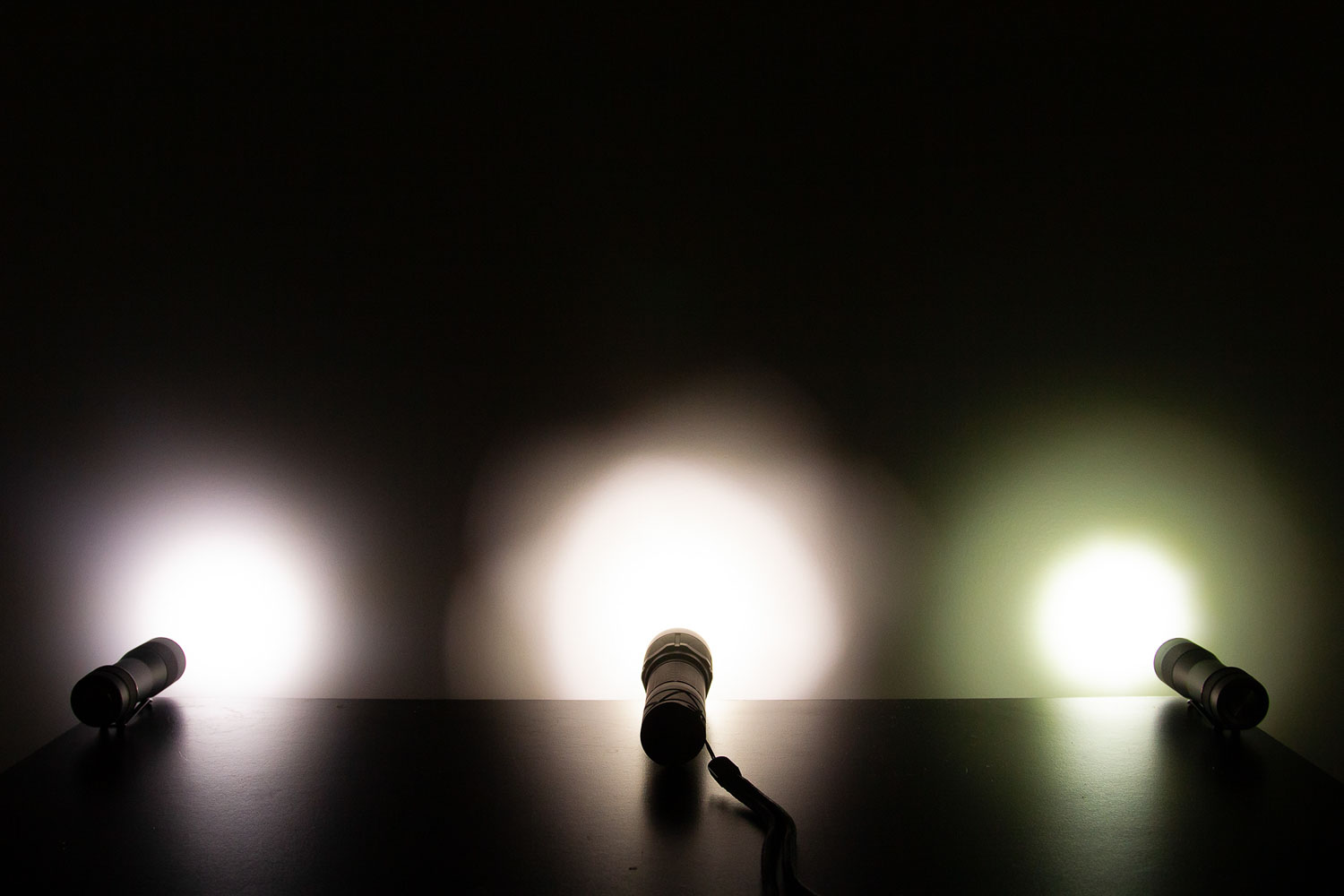 There’s an awful lot to like about this light - it’s a nice simple “pick it up and go” kind of light. The emitters are a lovely colour temperature, high CRI is always appreciated, and there’s no tint shift as per other emitters. Weight is good, lots of light if you need it, I’m loving the “petal” beam effect - all in all, a well put-together body and emitter combo.

The UI does detract somewhat from the light though; Biscotti or Bistro with configurable mode groupings would have been amazing to have on this, although I do understand that it would require a decent amount of driver redesign. The mode spacing is fine, but it’s nice to have options, as well as allowing for firmware customisation if one has the ability to do so.

I give this light 4 stars; if it had customisable modes, I’d have no hesitation adding another to it, though.