Today I’m taking a look at another Sofirn light, this time the SP33v3. Sofirn is a brand that needs little to no introduction to most enthusiasts – I recently reviewed the Sofirn SP36 BLF, and was very pleased.

The latest iteration swaps to a 3V XHP50.2 with an upgraded driver, but I’ll delve into that later. Also noted is a jump to 3500lm, which I will, as always, be testing.

I’m very curious to see how this performs, as I’ve seen a lot written about this light in the last few months.

The box I received appears to be a new Sofirn design – there’s far more colour than previously, and I do like the new orange additions. As to be expected with postal services, it’s been slightly damaged in transit despite being wrapped in bubble wrap, but it’s all cosmetic.

At this price point, that’s plenty enough – everything you need to get up and running with the light is included.

I’m actually not completely sure what I was expecting – for some reason, in my mind, I envisioned that this light was larger than it is. So to my surprise when I opened it, it settles neatly in my hand and is actually a great size for carrying.

With the weight of the cell added to the light, it has a good heft, which makes it very stable to hold. It’s rough enough that it won’t slide out of your hand, but it’s also not annoyingly rough.

There’s the one button on here – the side-mounted e-switch. The cover for this actually presses down quite a way until it actually touches the button itself underneath, and then activates – the button cover is almost flush with the body before activation. I would have preferred less movement, but having the button more proud does make it far easier to find the button.

The angular build of the head provides a small amount of anti-roll, but as it doesn’t protrude much, if the light is on a bit of a slope, it can go rolling.

You can tail-stand this light, and it’s great for that feature. Given the floody nature of the XHP50.2, using it to bounce off a ceiling is great for providing indirect illumination. It is a little less stable doing that as I would have liked, as the “cut-out” on the tail is a little large. It looks like the “gaps” are the same size as the part that touches the surface, this could probably be tweaked to be a more 75/25 ratio instead of 50/50.

There’s only one spot for the lanyard to go in the tailcap, and that’s fine. If you’re handy with paracord (which I am most definitely not), there’s plenty of places for it to grab.

Like a lot of lights in this price range, build quality is perfectly acceptable – anodisation is solid, there are no protruding sharp edges, and I’m not worried I’m going to scratch it by looking at it. There’s definitely a “form over function” tilt here, but concessions are made to form, as well – the stainless bezel, while a little cloudy on the outside, is milled well.

The fins around the head are perhaps slightly sharper than I would like, but this is only really an issue when sliding your fingers or thumb across the fins while pressing down; in normal use, they’re perfectly fine. The knurling is also rough without being uncomfortable, which is always nice.

The threads on this light are either unlubricated or have only a trace amount. Even still, it glides together quite neatly and with no noise or hesitation, so my money is on “very lightly lubricated”.

One annoying thing – the battery provided with the light rattles slightly inside the tube – there’s a bit of a gap between the cell and the walls. I don’t know if this is because there’s 26650s out there that are slightly wider (I know there have been a few 21700s out there with this issue), but it’s a bit irritating nonetheless. I’ve overcome it by putting some white paper stock in the tube with the battery, and that sits the cell firmly in place.

This version of the SP33 comes with an XHP50.2 3V – this emitter usually comes in a 6V variant which then requires a buck/boost driver to operate, but the 3V emitters can be driven by a FET, and much harder. While it’s not specified anywhere, my understanding is that it’s in the 6000K-6500K range. I’ve also seen a 5000K version on sofirnlight.com, but as of writing, it’s out of stock.

Using an OP (orange peel) reflector, the hotspot is smoothed out and enlarged for better usability. This makes it more floody in general, but for the kind of use I anticipate that it would get, this is perfect.

There’s a stainless bezel on top with three crenelations; I don’t think they’re in any way “tactical”, but just a nice accentuation.

The beam that the SP33v3 makes has a clearly defined hotspot, and then a fade-off to the corona. Unfortunately, like all XHP50.2, it has definitive tint-shift; from a bright point in the middle to a greenish halo around the hotspot. This definitely isn’t isolated to this light, though.

Compared to some of the best flashlights

The interface chosen by Sofirn for this is a great upgrade from the SP33v2 – it now includes the option of a stepped mode or ramping, with the ramping mode going all the way from moonlight to turbo, so you can get the entire range. I’ll cover both of these modes below.

While off, both ramping and stepped mode do the same as each other – a nice feature to have.

In both modes, mode memory is enabled.

Additional note: One thing that mildly irritated me, but most likely won’t bother anyone else: In stepped mode, when holding down the power button to go to moonlight, you have to release and re-engage to then move to the L/M/H cycle.

In my opinion, the best choice is to use a 26650 due to the greatly increased runtime available.

The cell provided in the kit is a Sofirn branded 5500mAh cell; unlike the cells from my recent SP36 review, these aren’t reskinned by putting another wrapper over the factory wrapping, as I found out very quickly (oops). Apart from branding, capacity, and statutory warnings, there are no other labels mentioning the capabilities of the cell – that said, I strongly suspect that this cell’s maximum continuous discharge rate is 10A, as testing has hit that as a fairly firm limit.

As the light includes USB-C charging (USB-A to USB-C only, though), it’s a simple matter to pop the battery on charge just about anywhere you go. While in the light, the cell charges at around 1.5A. Popping the cell in my Vapcell S4 Plus, it automatically chooses 2A charging. While a decent difference, it can definitely be inconvenient to use a dedicated charger while on the go, so the onboard charging is more than sufficient.

For my readings, I use the following:

I will be using the battery supplied with the light, as well as some quick testing with a Samsung 40T.

I strongly suspect that the top of ramp is turbo, but I might be getting battery sag while testing. Note to self: get a benchtop power supply that can put out 20A!

A note – a Samsung 40T 21700 can hit 11.25A on turbo. It doesn’t appear that much brighter to my eye though, and has one less amp-hour, so sticking with the included cell isn’t a bad idea.

So… we have a rollercoaster here. The light starts out well, but then it bounces up and down considerably for almost the rest of its run. I’ve tested this in high as well as turbo, and it appears to be related to temperature regulation. A closer look shows that it drops down, waits a bit, thinks it’s at a lower temperature, jumps back up and then realises that it isn’t, so throttles back down again.

I’ve overlaid the High and Turbo modes to show the difference – it seems like when I start in Turbo, it’s really trying to get back up that way, which is good to see, except for the rollercoaster.

I’ve also included the first 20 minutes of the run to show a more close-up look of how the throttling is happening. I’d really like to see that fixed in either newer builds of the v3, or definitely in the v4. 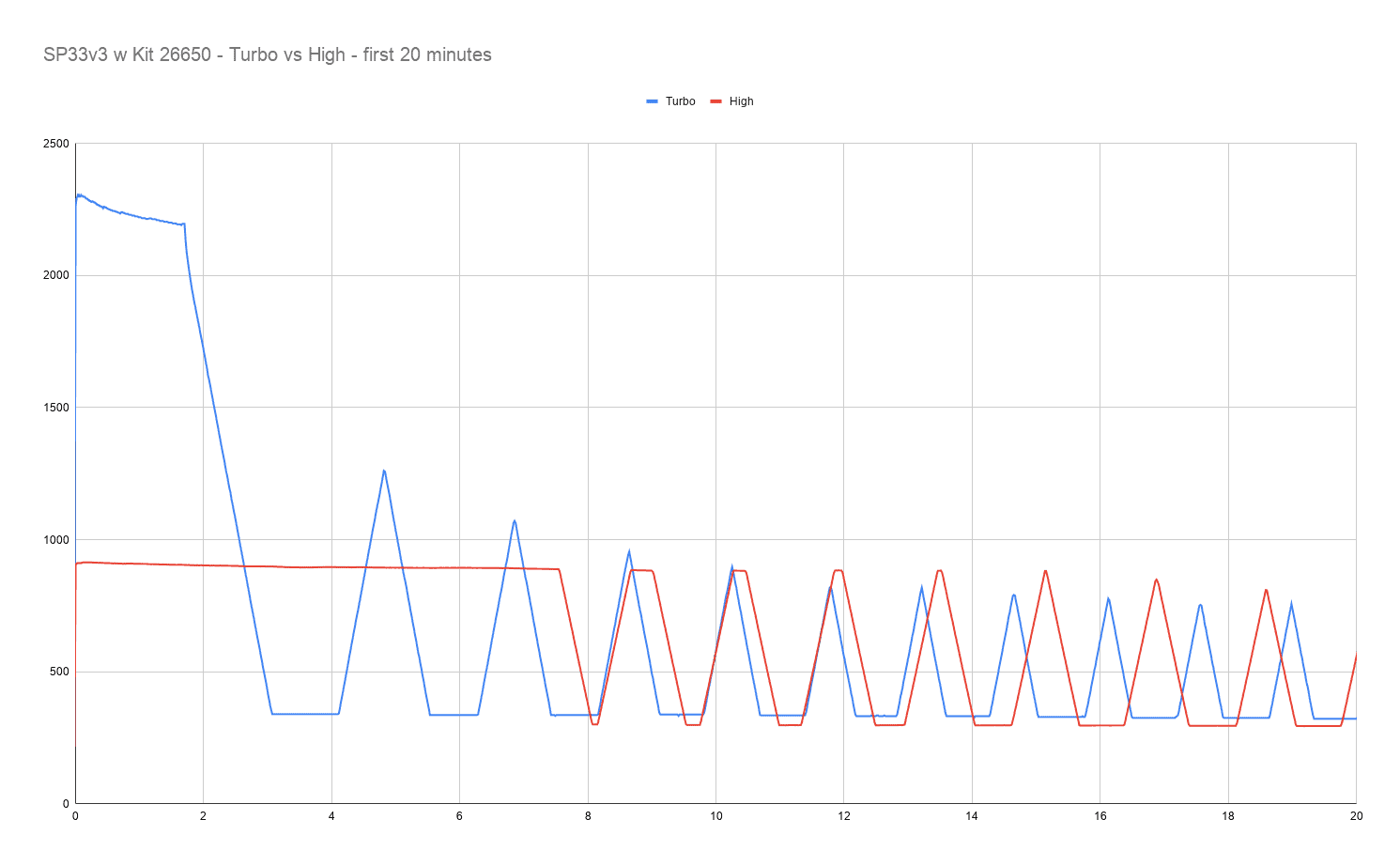 Even with that, the light ran for almost four hours before finally calling it quits.

After the light turned off with LVP, the battery read as 3.0V, which is somewhat interesting given the documentation suggesting that the turn-off is at 2.6V.

I’ve upgraded my Lumen tube to use a new sensor – in conjunction with other users from the flashlight community, I’ve been testing out a new sensor and method.

That said, all the reading I have done along with the discussion within the community seems to imply that tubes seem to favour “throwy” lights, so I built an integrating sphere and calibrated it. With that in mind, I get:

This… this isn’t ideal. While I expect an amount of difference between marketing and my measurements, I don’t expect that much.

After a significant amount of reading around, I’ve bypassed the springs on the tailcap, as resistance in the spring can severely inhibit the output. I used two small pieces of 22AWG wire, twisted the ends, and soldered to the top and bottom of the spring. With that, I now get:

In sphere after spring bypass:

That’s a decent amount better, but this is more like what the numbers should be out of the box, not with a spring bypass done by myself. This tells me that the resistance of the spring metal is far too high, and either needs a solid bypass in the factory, or higher quality metals.

One last measurement for the sake of it – I’ve now bypassed the spring in the driver too. This is going into “you really shouldn’t have to do this” territory.

I’ve measured at 5m indoors, and 10m outdoors. With a fully charged battery, I set the lux meter to record maximum lux, turn on to moonlight, point it at the sensor, then flick to Turbo, and gently wave the light around to try and capture all of the hotspot. With that, my results are:

This is actually quite surprising – I really didn’t think it’d have as high candela as that.

Compared to other popular flashlights.

Disclaimer: This flashlight was sent to me for review at no cost, by Sofirn. I have not been paid to review, nor have I been holding back on problems or defects.

This… this is actually a hard one to write. This light has an awful lot of potential – I do love that there’s the option for ramped vs stepped mode, I like the form factor and design, and I’m happy for the onboard charging.The things that really bring it down though are the tint shift of an XHP50.2 (not Sofirn’s fault in any way!), the vastly different output from advertised to measured, and that thermal ramping. I don’t know what’s going on there, or if it’s some weirdness with my particular setup and/or the climate here at the moment (note: it’s winter), but I can only imagine that being very distracting if one was out on a walk at night. The output being far lower than expected is quite a shame too – I can get it close to advertised, but only with modifications and a Samsung 40T.Are there things about this light I like? Yes. Are there things that definitely need changing? Very much so.All things considered, I have to write with my heart and give this three stars – with some changes, this could definitely be higher, but not in its current state.If you buy this light and have the capability to do so, bypass the spring with some 20AWG wire.